When we left off, Lex Luthor II, an Australian illegitimate love child, came from the bowels of the southern hemisphere to conquer and retain all the beautiful cash/influence/whatever businesses do from his dead father Lex Luthor I.  They look almost the exact same, except for a fiery gorgeous mane around Boy Wonder Lex’s head.  And more importantly, this new Lex is about to gain something else his father never had: love. 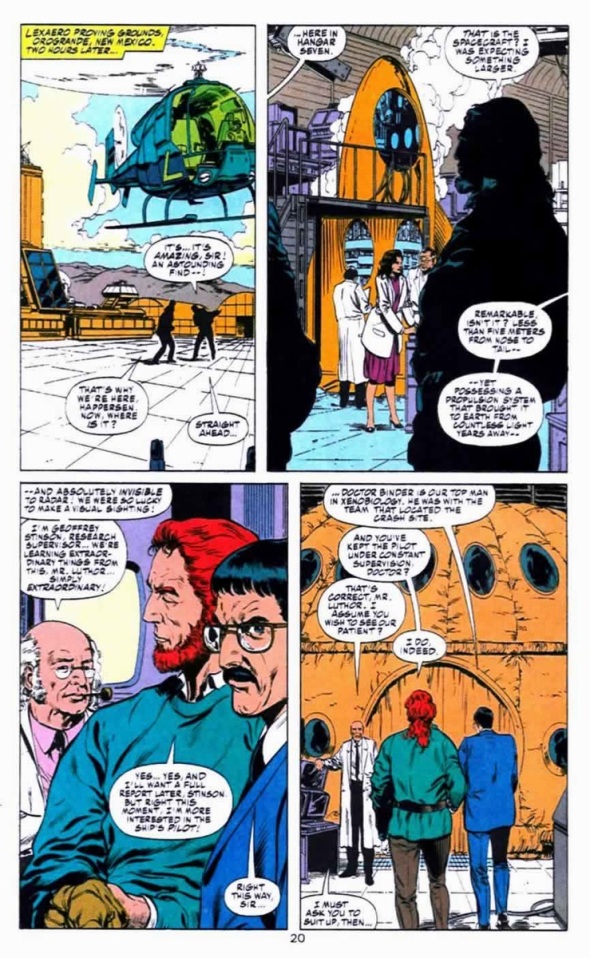 So I should probably explain – and explaining Supergirl history is the comic book equivalent of a calculus test or MENSA exam or understanding why people drink decaf coffee.  There have been numerous Supergirls, all with their own origins, insane plot devices, and one of those Supergirls once dated her horse.  This Supergirl in the page above comes from an alternative dimension where she lived as the girlfriend of a hairy, good guy Lex Luthor.  And most importantly, if a Supergirl is to fall in love with a Lex Luthor, the junior remains the far better choice than the senior. 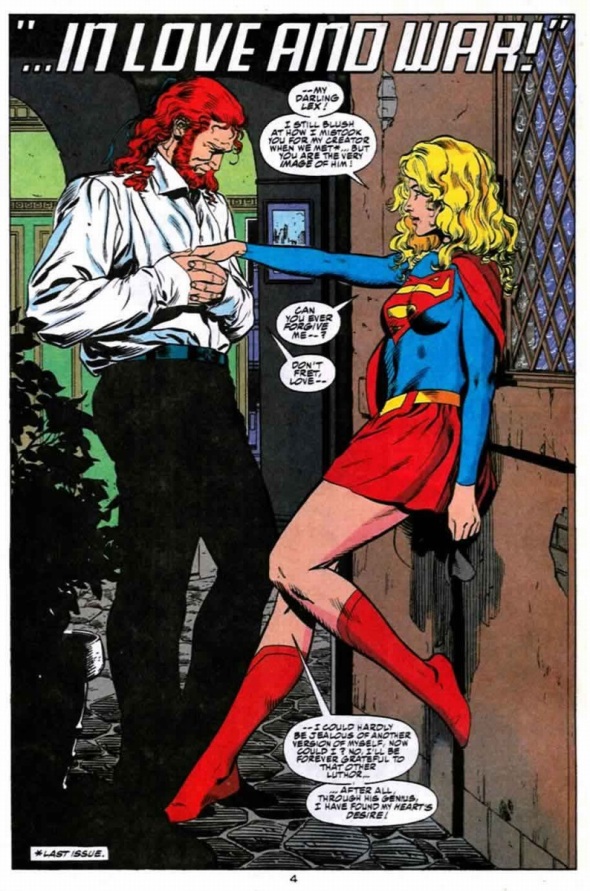 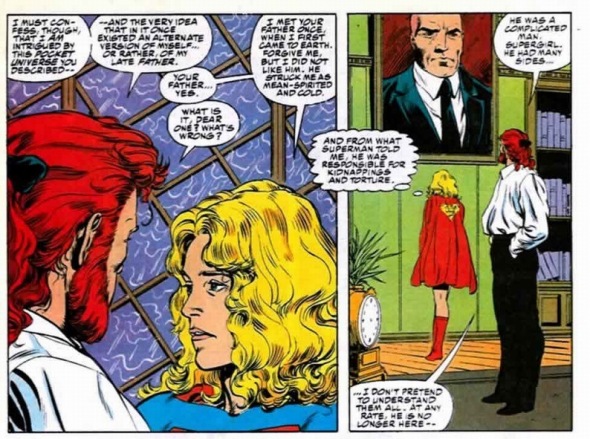 But we both know I’m not fooling anyone.  Where’s the conniving evil Lex Luthor we know and love? What’s the secret waiting to be revealed about this younger, sexier, furrier Lex Luthor?  Surely, he’s just using Lexcorp, Supergirl, and everything else gifted to him for some selfish and malicious goals, right?  Of course he is.  Of course he’s conniving and evil and selfish and malicious and other negative adjectives.  Because the genius behind the big reveal I’m about to show you isn’t in the scientific trick about to be ripped open, but that this Lex Luthor talks in an Australian accent.  That in the world of comic books – a world that allows Superman to be completely disguised with a pair of glasses, Lex Luthor speaks in an Australian accent for roughly the next two years until everyone figures out the truth sometime in 1994.  Also, Lex Luthor I survived the plane crash from last article. Obviously. 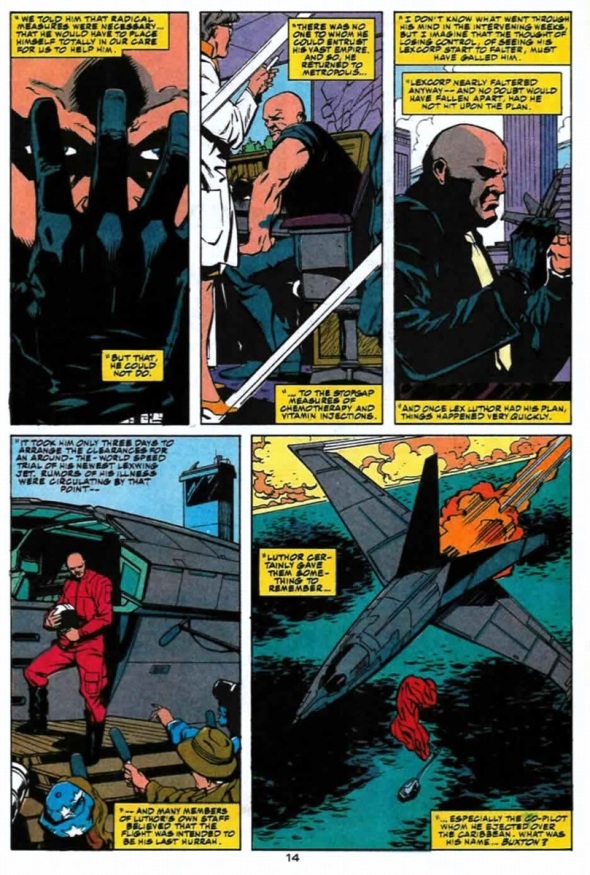 Even ejecting out of the plane so Lex can run off to a mountain mad scientist laboratory won’t cure his terminal cancer.  No, more drastic measures must be taken.  An obese, cancer-ridden body just won’t do for DC’s greatest (or second greatest) supervillain.  So for your continued amazement, I present to you the truth behind Lex Luthor II.  And while I know you’re going to be disappointed with the way the art in these next few pages obstructs our view of Lex Luthor’s penis, I think we can all agree that we don’t need to see it to know its huge.  Like the size of his penis probably qualifies as a superpower.  Fictional or not, I know that the only thing comparable in size to Lex’s dick is the disgustingly gigantic size of his balls.  Though honestly, with Lex’s pettiness and overcompensation, a case could also be made that the opposite is true about his genitals.  He could be holstering a toothpick with some raisins.  And since Lex Luthor is a drawing on paper, we’ll never get the real answer, but let’s all just compromise and assume at least his private parts aren’t average in size.  I feel like I accomplished something today. 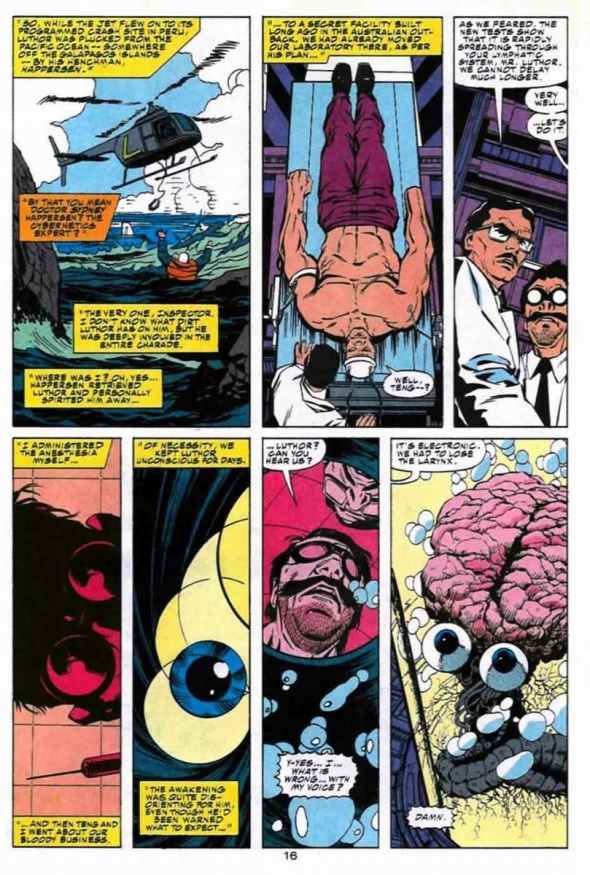 In a twist you most likely figured out last article, Lex Luthor II is actually Lex Luthor I in a cloned body.  We should have always known by the prominently excessive head of hair – when one can remake one’s physical attributes, a bald man will always opt for hair.  Don’t let any bald guy lie and tell you otherwise.  The original body gets thrown into a dumpster or whatever, meaning that from 1992 until the reboot in 2011, that Lex Luthor you’ve been seeing is a clone with Lex’s brain put in. But with the big reveal behind us, Lex Luthor can go back to being a jerk (secretly for now, though) – he chokes a woman to death a few pages before the ones below just because he can.  And what terrible timing too, as Superman just died.  Doomsday punched him to death.  Here’s Lex’s megalomania-induced eulogy: 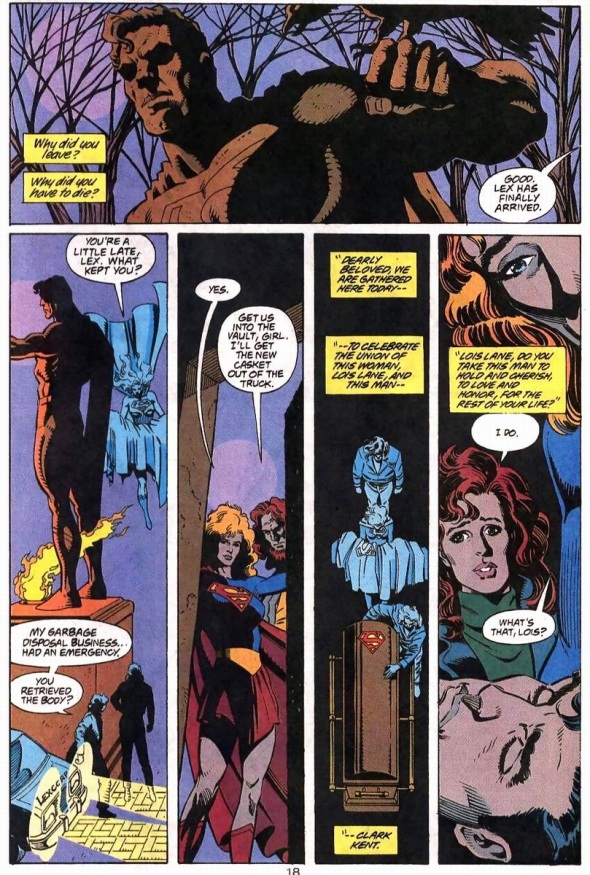 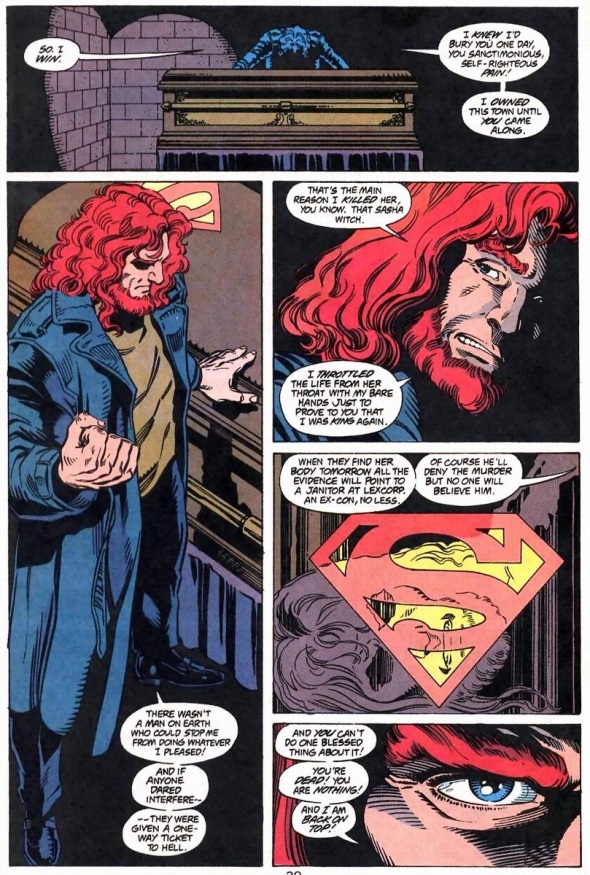 Next time, everything implodes, Superman returns, and Lex Luthor loses all his hair.  The hair probably saddens Lex the most.