Gay superheroes are the least weird things in comics

As you may know, DC made an announcement that Alan Scott, the original Green Lantern, will be rebooted as gay.  The man with the costume that makes him look like a cruise ship magician is now making out with dudes.

Superheroes aren’t real.  They’re fictional.  But you can’t deny they’re ingrained in our movies, TV shows, books, and symbolism.  Pop culture dominates our free time entertainment, so big changes to characters we grew up with and love can lead to major news coverage.

Preceded by the gay interracial X-Men wedding between mutant Northstar and civilian Kyle, this is just a step towards this medium reflecting the current times.  Except if anyone objects to gay superheroes as unnatural or promoting an alternative lifestyle, they have obviously never read comics before. Homosexuality is hardly the strangest thing in comics, because comic books are insane.  I present to you two case studies to prove that superheroes swapping spit with other men is the least weird thing about them.

(I’m going to spoil a bunch of stuff, heads up.)

Before we start, remember even hetero romance in comics is crazy

Let’s take the most recent issue of The Incredible Hulk.  It’s #7.1 if you’re a big fan of decimals.  Hulk lost all his hair after being blown up last issue by a gamma bomb in an attempt to kill his alter-ego Bruce Banner, who had been recently separated from Hulk because of a brain surgery by Doctor Doom.  Follow so far?  Banner’s lover, Betty Ross (played by Liv Tyler in the movie), has been turned into the Red She-Hulk for a few years now.  Makes sense, right?  Well, in this issue, they have sex in public while a giant eyeball man watches them: 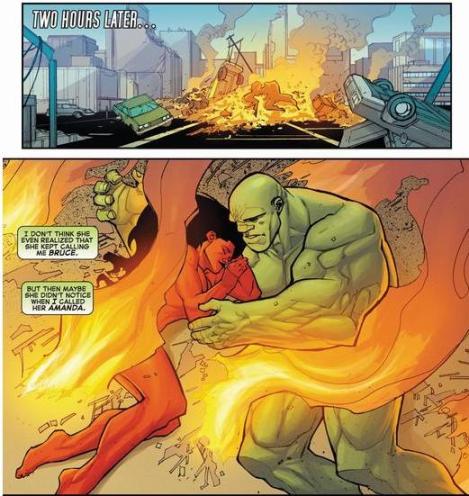 More importantly, I’d be remiss not to mention that in Uncanny X-Men #8 about three months ago, the upstanding Namor got it on with a giant sea worm:

You understand why this is okay?  Namor made love to a female giant sea worm.

But implied sex is boring and safe, so let’s not forget the most controversial page in the rebooted DC last year.  In Catwoman #1, Batman and Catwoman get frisky, which leads to this:

Meet supervillain Daken Akihiro, the biological son of Wolverine.  He’s half-Japanese and full-asshole. The guy is too busy being a dick to put on a shirt or realize his hair is way too long for a mohawk. While never A-list like his father, Daken did become sort of famous when he pretended to be Wolverine and did this:

So he killed The Punisher.  Like chopped him up into little bits.  Of course, The Punisher came back to life.  Can you figure out how?  Did you guess that sewer monsters sewed Frank Castle back together and turned him into a giant Frankenstein?  Of course you did.  But anyway, Daken is bisexual:

Before you judge, let’s learn some more about him!

Daken mainly antagonizes his father, because Wolverine is a terrible dad.  Kind of.  In 1946, Wolverine is living in Japan with his pregnant wife.  While Wolverine is out hunting deer or shaving his back or something, an assassin kills his wife and tears the baby out of her womb, leaving the kid to die. Luckily, baby Daken lives because he inherits his father’s healing factor and then screws around for like fifty years before going to get revenge on his dad.  Cue a bunch of douche stuff.

Basically, he’s a charming sociopath forever haunted by the idea that he’ll never be as good as his father.  Though currently, Daken is dead.  You see, while in Los Angeles trying to become the next Kingpin, he overdoses on this mystery party drug called Heat which overloads and destroys his healing factor. Because it’s killing him, he decides to head back to New York City to take out Wolverine (though this is like the eighth fight between the two).  In his final moments, he cries and whines before suicide bombing Times Square. 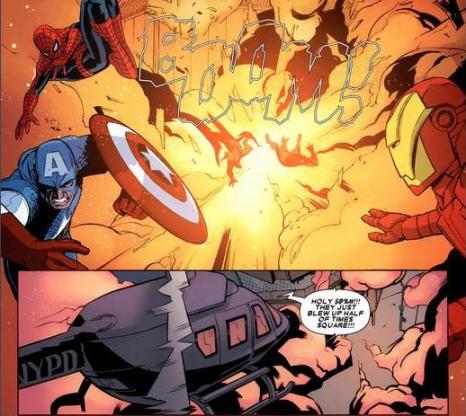 So after all this mess, we can all agree that his bisexuality is definitely the strangest thing about him? No?  Not that his bones pop out of his wrists or his tattoos seems to cut off right in the center of his chest?  Right, it’s probably that he smooched Bullseye, whose real name is Lester.

Teenage superheroes Wiccan (left) and Hulkling (right) are members of the Young Avengers and an openly gay couple.  Just a normal gay couple.  Well, except Hulkling’s a space alien, the offspring of a Romeo and Juliet type consummation between two warring species, the Skrulls and the Kree.  He’s a shape changer with super strength, though unlike his namesake, he frequently has wings, which would only get of the way of real Hulk’s street sex.  Wiccan is the grandson of Magneto, bane of the X-men and grumpy Holocaust survivor.  Like most children you grew up with, Wiccan’s mother, the Scarlet Witch, had a nervous breakdown and using her mutant power to alter reality, created two fake children (one of them Wiccan) to take care of and love.

So y’know, pretty ridiculous that they’re gay, right?  Sure, one is a wizard willed into existence and the other is an extraterrestrial smuggled to Earth, but it’s clearly unnatural that they touch penises.

As much or as little as you care about superheroes, it’s important to remember that their motivations and actions are defined by the tragedy in their life.  Spider-Man’s unwavering responsibility to protect the people around him is because of his selfishness getting his Uncle Ben killed.  Batman patrols and fights crime nightly because of the helplessness he felt when his parents were shot.  Superman (for a long time) was the last survivor of the Krypton people.  Professor X was paralyzed trying to stop Magneto killing the human race.  The Punisher witnessed his wife and children massacred by mobsters.  Hell, Daredevil became blind, had his secret identity exposed, his career ruined, two lovers killed, and a third gone insane.  We should just be impressed that superheroes aren’t constantly rolling on the floor openly weeping.  So when superheroes have these small moments where they’re genuinely happy, it’s a comforting moment to the reader: 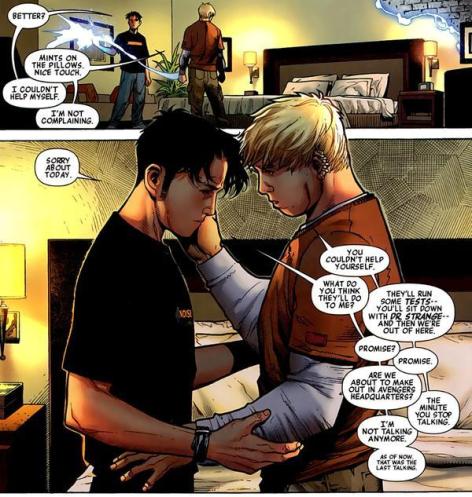 And considering how many women Iron Man or say, Hawkeye, have boned within a single twenty page issue, it takes seven years before Wiccan and Hulking are finally shown kissing.

Conservative organizations spew hateful rhetoric because of two kids locking lips fully clothed?   If Catwoman was there, you would have seen one of their balls.  Let’s not ruin melodramatic storytelling with complaints of indecency, solely because both characters can grow beards.  Get mad that Hulkling has five earrings in one ear.  That’s insane.