You ever hear this story?  During a home invasion, a man was killed defending his property.  His son, a young boy named Tim Drake, angry and desperate for revenge, trained for years with the greatest warriors to gain the skills and tools necessary to carry out his payback.  But will he learn that justice is more important than revenge?  Will this story of redemption and adolescence be watered down because of silly characters?

Yes, it will.  Because the men destined to clash are these two: 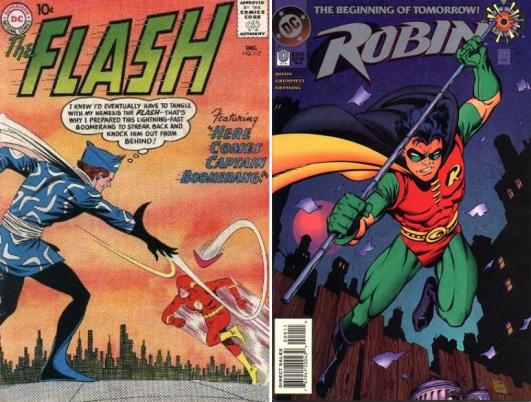 Tim Drake is the third Robin, becoming one of the finest fighters in the world under Batman’s watchful gaze.  But his father’s killer, the man who made him an orphan and destroyed his home life, is supervillain Captain Boomerang.

I use the term “supervillain” loosely.  Captain Boomerang is a member of The Flash’s rogues gallery, where his gimmick is trick boomerangs and a thick Australian accent.  During a major DC event about seven years ago, he was hired to take out Drake’s civilian father.  Daddy Robin was a world-traveling archaeologist, as most parents are, and before he died, he managed to badly injure the captain using his weakness: a pistol with bullets.

So young Drake, now 17 years old and in his new superhero identity Red Robin (just like the restaurant you see all those commercials for and never go to), tracks Captain Boomerang down and is prepared to finally face his father’s killer.  Which is a fantastic plot, except Red Robin’s therapy bills are because of this guy: 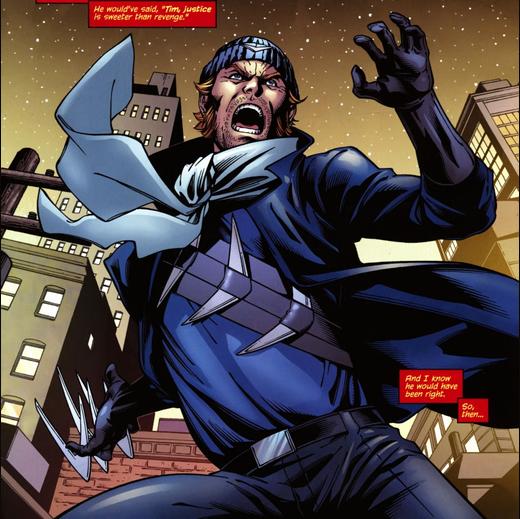 His nemesis wears jeans and a knit cap.  So let’s explore Red Robin #26, the final issue of the series, and see how this all turns out.

If you know about Batman, you know he’s pretty against killing.  A code or something.  Like with Dexter.  Since Red Robin is part of the Batman family, all that stuff applies to him too.  So when the previous issue ends like this, you know the tension is riding high:

Except all the suspense is cut down instantly.  Because the villain is named Captain Boomerang.  If you need a mascot of frozen onion rings or a new Wiggle, please go with Captain Boomerang.  But it’s a terrible name for a cold-blooded assassin.  Certainly doesn’t help that most of the fight between the two goes like this anyway:

Y’see, after the original Robin (the one who wore that speedo and no pants) graduated and became Nightwing, writers added in a terribly unlikable new Robin named Jason Todd.  He was a tool and after a few short years, was famously killed by Joker with a crowbar.  But no one in comics dies forever. You know how he came back, right?  Did you guess that a parallel universe Superman punched so hard that it altered reality and brought Todd back to life?  You did?  Good.  Anyway, Tim Drake, a then 9-year old kid, was introduced in 1989 and because he wasn’t an asshole, readers grew fond of him. Riding on the massive popularity of Batman, readers tended to care a lot greater deal about Drake and his stories compared to say, Hawkman.  So when he finally confronts his father’s killer for the first time, pissed and with a legitimate morality decision, well, that’s a big deal.

So, during the fight, you see Red Robin going all noir and rationalizing his actions.  It’s an important moment in the maturity and development of the character.  Y’know, if he wasn’t dodging scary boomerangs. 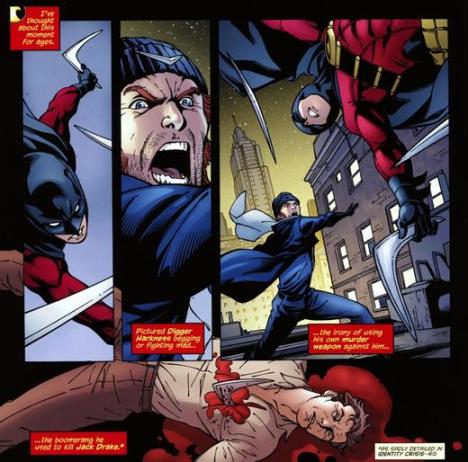 Oh yeah.  Captain Boomerang’s real name is Digger Harkness, which is a name much more suited to a crewman of Pirates of the Caribbean or a mediocre garage band.

Because Red Robin is the title character and good guy, and because it would be a super jerk move to have the captain win, Red Robin gets the upper hand and has to decide the walking stereotype’s ultimate fate. 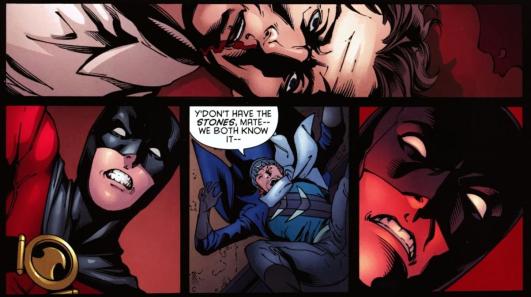 So what happens?  Does Drake let Captain Boomerang fall to his death?  Does he forsake the lessons taught by his mentor Batman and go for the immediate gratification that would obviously sever his emotional capabilities and years of relationships built with his fellow superheroes?  Of course he doesn’t, because it’s not the 1990s anymore.  Back then, everyone took the dark path and wore leather jackets.  But because we’re in an era where we like our good guys doing good things, Red Robin sends him packing to jail.  Sure, it’s not an easy choice to make (mainly since a villain never stays in any sort of confinement for more than an arc or two), but it also shows his growth as a soldier in the fight for the heart and the soul of the city.  Also because Captain Boomerang is one of the more dangerous of The Flash’s bad dudes.  His rogue gallery is really terrible.

Luckily, his sacrifice is noted with the approval of the man he admires most: 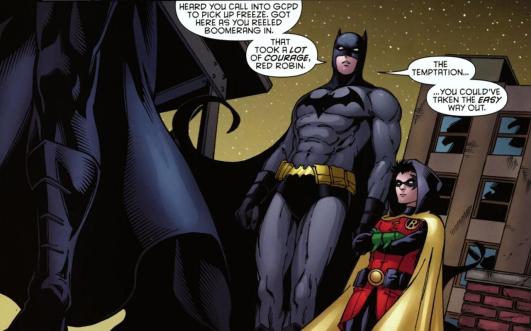 Though that’s actually not Bruce Wayne, because Wayne had just been brought back to life a few months prior since being lost in time after his fight with Darkseid.  That’s the original Robin taking his place as the new Batman and Wayne’s biological son with the daughter of Ra’s al Ghul (played by Liam Neeson in Batman Begins) as the new Robin.  Comics are insane.  Turns out, the real Batman was watching the whole time from the shadows.  And of course, the real Batman is a huge dick to Drake, because being unpleasant is one of Bruce Wayne’s most endearing qualities.

And thus our hero’s spiritual journey is at an end, with still more to think about and evaluate.  Will he be a better person and continue to fight crime with a renewed sense of right and wrong?  Yes, because this isn’t Seinfeld.  They rebooted DC and now Red Robin is serving as the leader of the new Teen Titans, the raddest dance crew in the Western hemisphere.

And the fate of Captain Boomerang since the reboot?  He was briefly the leader of the Suicide Squad, a supervillain team working for the government.  The namesake is for the ridiculously high body count in the comic.

So he landed on his feet.  Thank goodness.

While I’m glad Red Robin has a happy ending to his personal story, a cartoonish stereotype of a popular foreign culture will always be a terrible antagonist to avenge family.  At least comic book editors wouldn’t dream of getting even dumber with portraying the hard-working, lovely, honest Australian people. 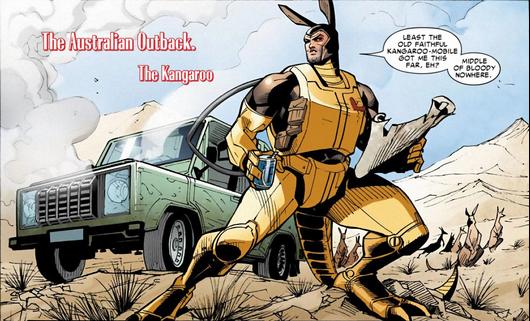