Learn to love again with Thor

When you saw The Avengers in theaters, your first thought was most likely, “The god with the hammer would be great in a romantic comedy.”  And you’re right.

Because Thor has been around in comics for almost 50 years, he’s had a bunch of lovers.  Most of the time, he prefers the fighter women with the battle bikinis and giant swords.  And when he’s not seducing Xena Warrior Princess, he’s smacking monsters around.  It’s a fantastic formula that I hope never disappears.  But in 2010, Marvel tried something different.  The company released a tragically short lived series called Thor: The Mighty Avenger, which was surprisingly sentimental and sweet. Sure, Thor hit tons of bad dudes with his hammer, but the relationship between him and perky mortal Jane Foster made the comic a story unseen before in Thor comics.

So let’s examine the relationship of the two lovers.  I’m going to skip most of the fighting parts, but I promise if it gets too sappy, I’ll make some fart jokes.

(Heads up, I spoil pretty much the entire series.)

Meet Jane Foster (played by Natalie Portman in the movie).  She’s a museum curator, who as you can see, is just out of a bad relationship and not ready to be emotionally vulnerable again.  Well, that’s not going to happen, because that would be a terrible love story.

Thor, dressed as a hobo, is thrown out of her museum after tussling with some guards.  What did he want?  Why can the god of thunder not take minimum wage museum security?  Well, the answer isn’t as climatic as you think, but now the two have caught their first glimpse of each other.  Y’know, the glance that seals their fate.

That night, Jane and her ex are taking a closure walk when Thor happens to be outside the bar.

Now as a god, Thor is certainly within his right to indulge in personal hedonism, and let it be known that anyone in Asgard who does not consume their weight in mead is almost certainly a sissy.  Yet this night, Thor has no sorrows to drown or victories to toast.  Instead, he’s obliging his chivalrous duty.  Except it’s with a way tougher guy. 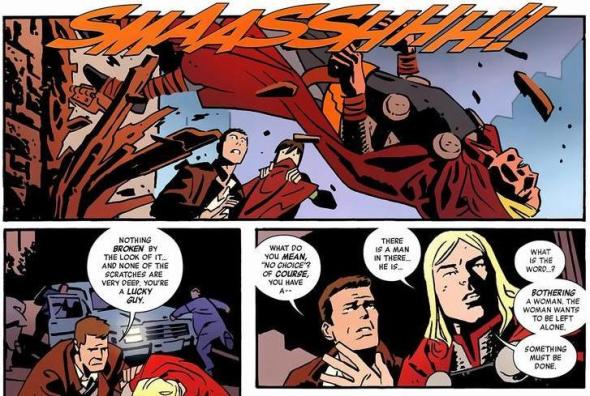 And let it be known, that to defend the honor of a young lady, Thor is not above fighting dirty:

The baddie runs away, and with Jane’s help, we find out why he needs to go to the museum so badly and more importantly, why he’s fighting like a punk. 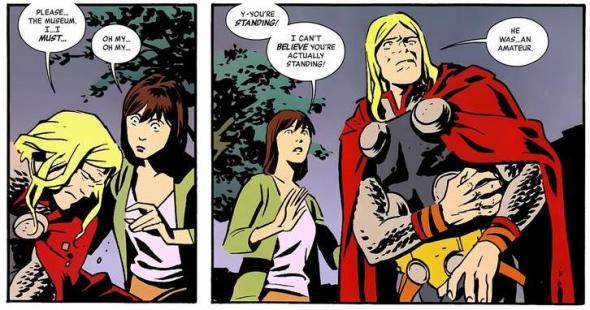 You see, his hammer Mjolnir, the source of his power, was hiding in the museum the whole time! Thus with his original strength back, the introduction phase is over and we can finally watch these two young people fall in love. 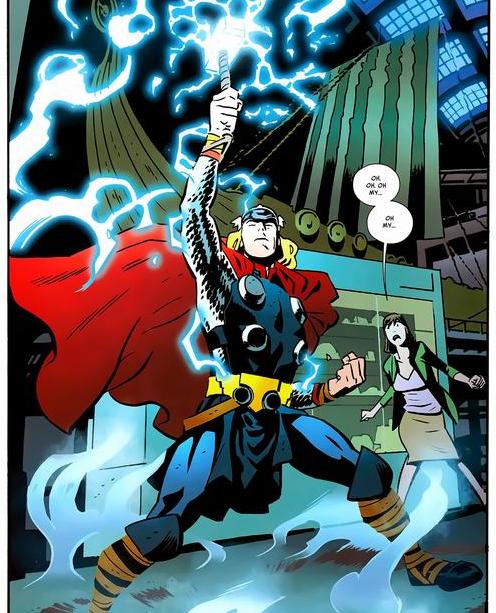 Unluckily being stranded on a planet not his own, Thor still needs stuff like nourishment, shelter, and cuddling.  Because Jane is a darling, she makes an offer:

Much like the movie that half of you saw, Thor has a bit of an arrogance problem.  Thus, his father decided to banish him to another world so he can learn some humility.  I would have made him join a frat or use god magic to give him manboobs or something, but leaving him stranded on a strange and foreign land will do.

This whole situation makes Thor fairly depressed that he can’t go home.  I mean, those frost giants aren’t going to punch themselves.  So what is he supposed to do?  How is Jane supposed to cheer Thor up while still keeping the comic appropriate for all ages? 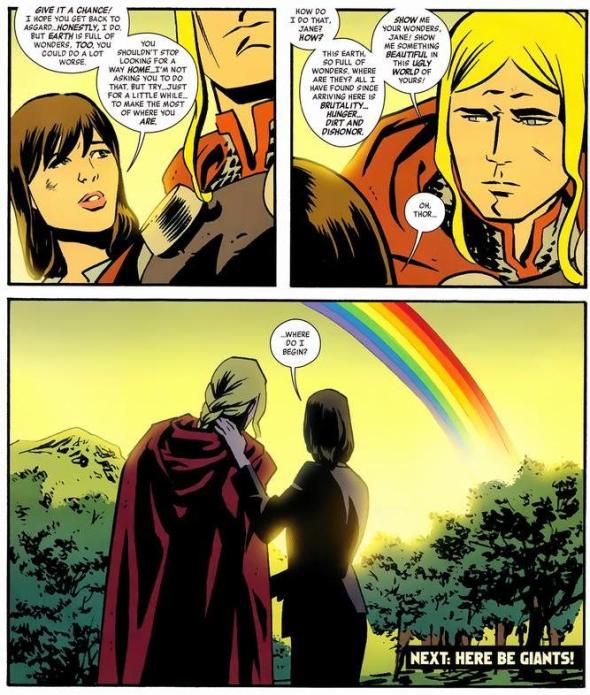 We have a few issues of Thor beating up bad guys or being tricked into beating up good guys while Jane has normal sitcom situations trying to deal with this goofy outlandish figure in her life.  But the two are falling in love, and unfortunately, they’re the last to know.

Despite being equal parts exciting and charming, Thor: The Mighty Avenger only lasted eight issues.  Critical acclaim but poor sales lead to its cancellation, and that meant what would normally be a flirting tease lasting two and a half seasons  had to be moved along with fairly quickly.  So in issue six, we get the climax of the romance, where Thor takes Jane for a ride on his magical goat chariot to travel the world and see what beauty it offers (though we all know that the real beauty is sitting in his passenger seat, right ladies?).

A few select emotionally charged scenes and our hearts flutter: 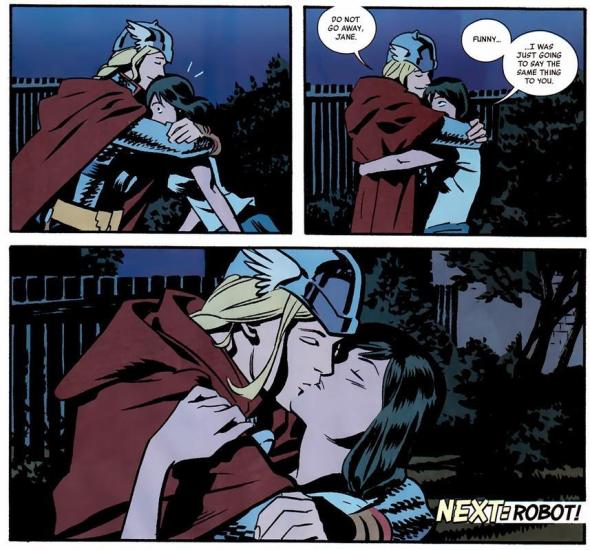 Yup, next: Robot!  But with that important kiss, Thor has finally shown vulnerability by opening his heart to Jane, or whatever romantic notions it implies.  I don’t deny that the two are well together, but even as a straight man, I’d kiss a dude if he brought me on a global trek in his wizard goat wagon.

Back in Jane’s apartment, we get a final moment of peace between the two before the final arc and the end of the series.  Here, Thor makes dinner for Jane and the lovers enjoy a quiet meal.  The calm before the storm and all those cliches.  But it’s romantic, sweet, and the facial expressions are perfectly drawn:

Because Thor made his splash in a little town in Oklahoma, the townspeople have made quite a stir about Thor in panels that I didn’t show you.  He is a superhero wearing a hat with wings.  But as you can guess from the previous image, a mysterious force (robots) ravage the city and the citizens can only think of one person who could do damage like that.

Well, Thor has a riddle to solve (robots) and who do you call when there are bad guys with lots of cool tech?  I’m not telling you – go read the series.  With a final team up, Thor and his buddy clean up the mess, take out all the machines, and save the day.  He’s a superhero, gosh darn it, and that’s what they do. 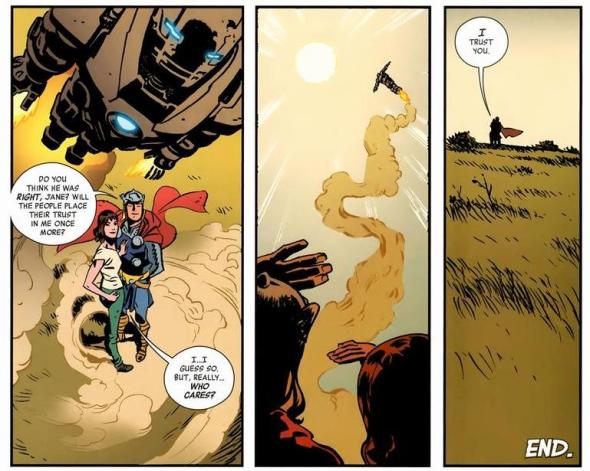 Very few things are as satisfying as a happy ending.  Wipe away the single tear that rolled down your face and reactivate your online dating profile.  You deserve to be loved too.

One Comment on “Learn to love again with Thor”