Comics are complicated.  But as you know from the Avengers movie, Captain America (real name Steve Rogers), after spending 70 years frozen in ice, has returned to the modern world.  He’s the moral center of the team, leading them to victory with the confidence and competency a war hero would.  But in comics, there are two Captain Americas.  Well, actually like a half dozen, but for the sake of this post, we’re going with Steve Rogers as Captain America.

A little backstory is required that hopefully won’t take too long.  So in the “normal” Marvel universe, it’s unwritten but implied that most of the heroes have been fighting evil for like upwards of fifteen years or more.  For instance, Spider-Man is most likely in his late 20s.  Iron Man and Captain America are probably around 35.  So how does Marvel attract younger readers when all the most popular characters are the same ages as their dads?  Well, the company attempted to solve that problem. They created a new “side” universe, called Ultimate Marvel.  There, the characters were reintroduced as younger, and their origin stories were re-calibrated for a modern era.  Ultimate Spider-Man was the first comic they tried, making Peter Parker a 15-year old kid who gets his powers from a genetically altered spider and works for The Daily Bugle as their webmaster.

But why should you care about the Ultimate universe if you’re not hardcore into comics?  Well, Sam Jackson’s Nick Fury came from the Ultimate line.  And the new Spider-Man movie coming out next month is a rough adaption of Ultimate Spider-Man.  Pop culture-wise, it has had some lasting effects.

Nowadays, Ultimate Marvel is a shell of what it used to be, and they’ve used crossover events to pretty much destroy large sections of the planet and kill off over half the major characters.  But we’re here to talk about Ultimate Captain America.  That guy’s a dick. 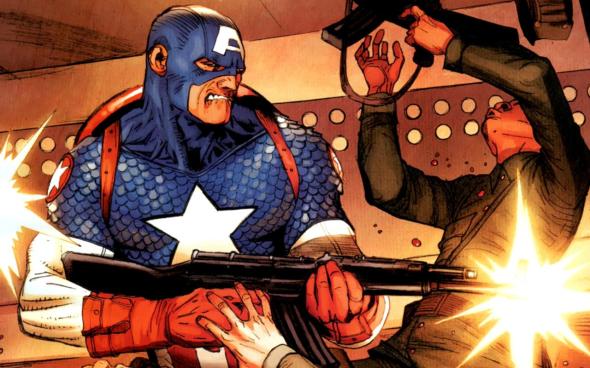 His origin story remained pretty much the same.  He was given the Super Soldier serum that made him awesome.  He became a badass World War II hero before crashing a plane and getting frozen in ice near the end of the war.  Except this new Ultimate Captain America never loses his 1940s war mentality.  He’s tough as balls.

If you read the comics, most of the pages have him doing a face like this:

This is not a man who smiles.  This a dude who saw some crazy stuff in the war and taking his PTSD out on whatever spandex-wearing sap is in front of him.  Because the Ultimate line at the time was like eight different series, they didn’t have to really deal with massive backlash from forty ongoing comics. So the stories tended to get more massive and destructive.  That meant Captain America, unlike the normal universe, spent roughly equal time as a soldier as he did a superhero.  Steve Rogers commanded the Avengers (creatively called the Ultimates) and the military.  Kind of.  Which led to almost all of his dialogue being turned drill sergeant-ish into something both offensive and inspiring: 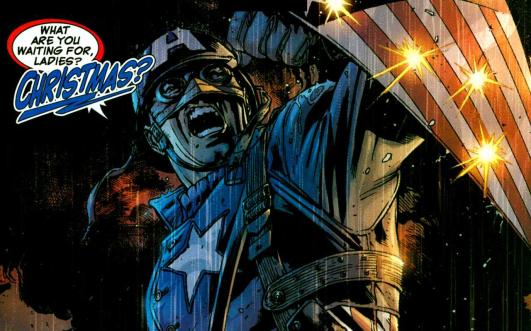 Sure, he’s a stereotype of the tough guy old timey soldier, but the normal, older Captain America was too busy being dead and doing spy missions and such.  Here, we get a warrior who will never be satisfied until he’s bloodied every man, woman, and most likely child who dares cross the greatest freaking nation in the history of the world.

I’m not saying he didn’t adapt to modern times.  He got himself an half-Asian/half-wasp girlfriend.  He started untucking his shirt.  But what never changed is that Ultimate Captain America will forever be out of his own time and just a little bit unhinged.  Though, let’s be clear that he’s not insane.  It isn’t like he thinks he can fly or anything. 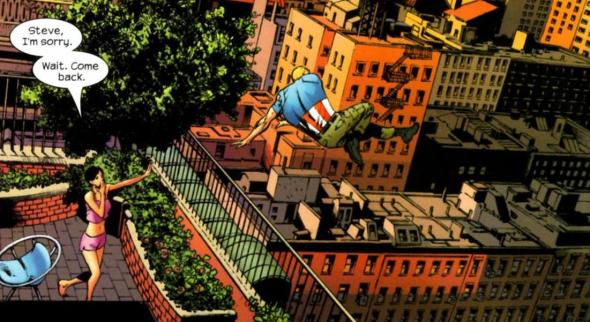 Okay, maybe a little mentally off.  But that leads to one of the most famous scenes in recent comic history.  The captain is fighting a shape-changing Nazi alien.  Normal everyday flair.  The bad guy gets the upper hand and demands he give up.  Well, Captain America may not enjoy stuff like pop music or hair that isn’t a buzz cut, but it’s fairly well-documented that Nazis tend to top the list.  So we get this moment:

Yeah, he’s totally beating a naked war criminal with his shield.  And you’ve never felt prouder to be an American.  At his core, Captain America is a patriotic symbol for this country.  Steve Rogers is a soldier who fought in nearly every battle of the second World War and upon his defrosting, immediately became the star player in the most powerful fighting force in that comic book world.  I’m just saying Captain Britain got his powers through magic, like Harry Potter in a skintight suit.

Honestly, half his fights are him going mano-a-mano with Hulk, and you’ve all seen the movie where Hulk one hit KOs the giant space slug.  Sure, he’s not terribly active (or at all) in the remnants of the once great Ultimate line of comics, but the next Sam Adams I drink will be in his honor.  I don’t care he’s not real.