← Jokin’ with Wolverine
The art of seduction with Hercules →

Of the “big three” DC superheroes (Superman, Batman, and Wonder Woman), the Amazonian princess is by far the least popular.  It’s unfortunate too, because despite her silly costume, obscure rogues gallery, and creepy bondage fetish in her earliest comics, she’s one of the toughest and most interesting superheroes in the DC universe.

Her origin story is soaked in magical artifacts and Greek gods.  In summary, Wonder Woman (real name Diana Prince) became the finest warrior on the Amazon island and received the honor of venturing into the real world to fight crime or strangle men or whatever.  And despite her sexy Uncle Sam costume, she wears the traditional outfit of the Amazonian champion.

Most importantly, many readers underestimate just how powerful she really is.  At her best, Wonder Woman’s a more visually appealing Superman.  She’s just as strong and just as fast.  Plus, she can also fly.  Sure, Superman has heat vision and freeze breath, but Wonder Woman gets that truth lasso, bulletproof bracelets (though she’s fairly bulletproof herself) and mastery of almost the entire catalog of medieval weaponry.  And one final, world-shaking difference that we’re going to read about today. Enjoy Wonder Woman #219 and #220, written by Greg Rucka.

Meet supervillain Maxwell Lord.  His superpowers include influencing minds, as you’ve seen above. Also, he’s a huge perverted jerk.  But to say Wonder Woman outclasses him in sheer strength and fighting ability would be like saying Batman isn’t fond of crime.  In a fistfight, Lord doesn’t stand a chance.  So he does what most telepaths would do: have Superman kick her butt instead. 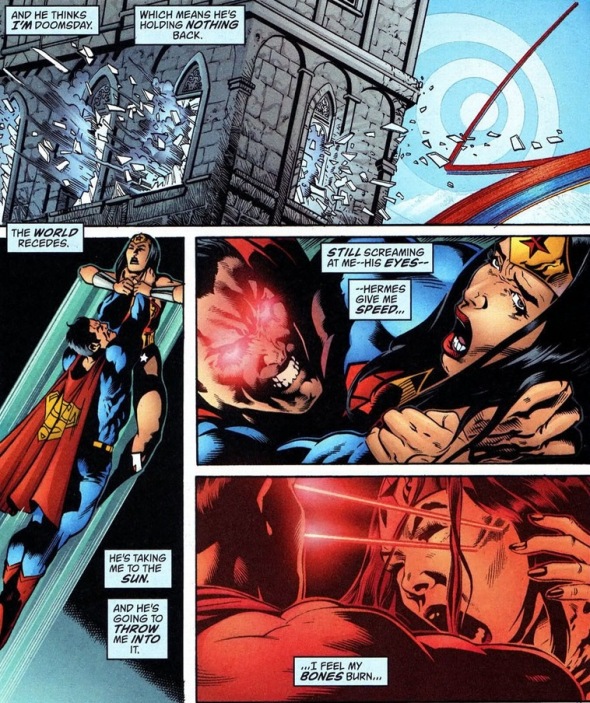 Bad start for our protagonist.  And she’s definitely not dressed for space.  But we’ve all seen UFC fights: it only takes one lucky shot to take out your opponent.  Wonder Woman can turn the tide. 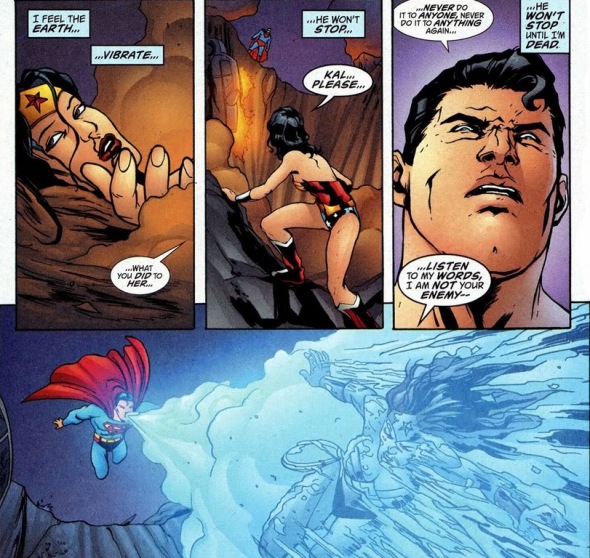 Well, eventually.  Diana has spent most of her life training and sparring with her fellow Amazons. She’s a shrewd fighter with a keen eye for combat weaknesses.  So how does she take down an enemy that can’t be beaten by simply brawling?  Well, let’s remember that Superman has a bunch of cool powers that Wonder Woman doesn’t.  You know, to exploit.

Unfortunately, for all the power that she possesses, poor Diana doesn’t have the durability of the Man of Steel.  And that means Superman can cause harm to her in ways that she can’t do to him.  Like, I dunno, this:

She’s not going to win.  Especially with only one wrist.  Instead, she can thank whichever god gave her all those smarts.

Because as you saw earlier, Superman’s delusions are being caused by Maxwell Lord.  In the equation of battle, take out the puppet master and the puppet falls too.  Huh?  Why yes, I am flexing while I’m writing this. 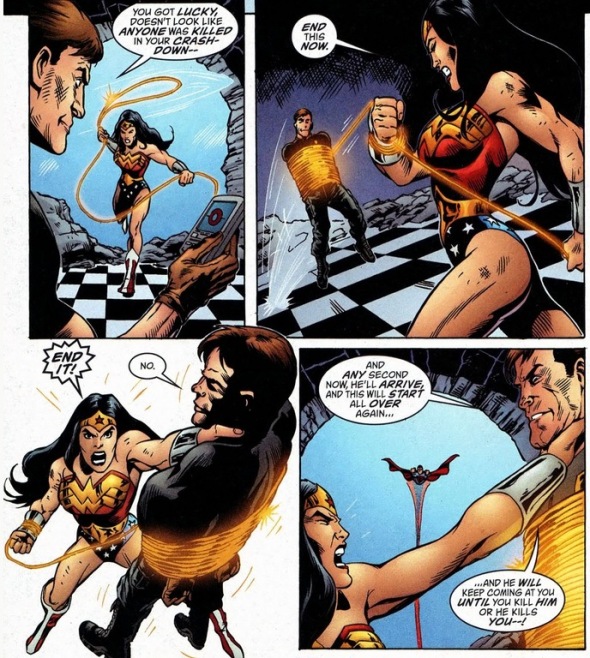 I haven’t read a ton of Wonder Woman, but probably like you, I had no idea her tiara could do that. Though makes sense, considering her costume doesn’t really have space for batarangs or anything. 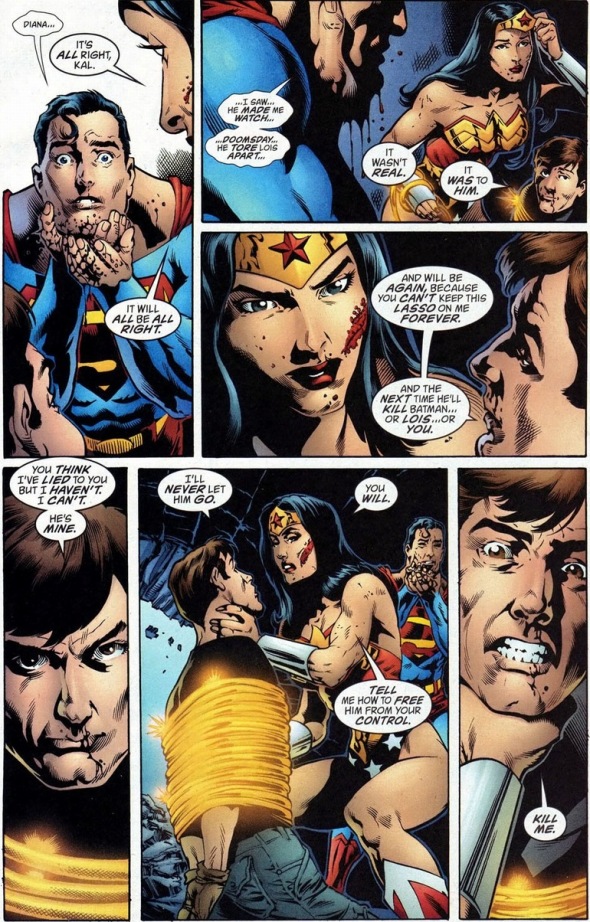 Can you guess the earth-shattering difference between the two superfriends?  The difference that tears apart their relationship, kicks Wonder Woman off the Justice League, and cements her as a pariah in the superhero community?  Yup, this:

To be fair, Wonder Woman has killed before.  Lots of times.  She’s technically an Amazonian soldier. But you must understand how this affects Superman, because big blue boy scout sees this matter forever and always in black and white.  Because of how massively powerful he is, he absolutely must have an unwavering responsibility to the laws and morals that govern his country.  Such as not killing dudes.  This extends to his Justice League buddies too, because they can also fly and shoot lasers and stuff. 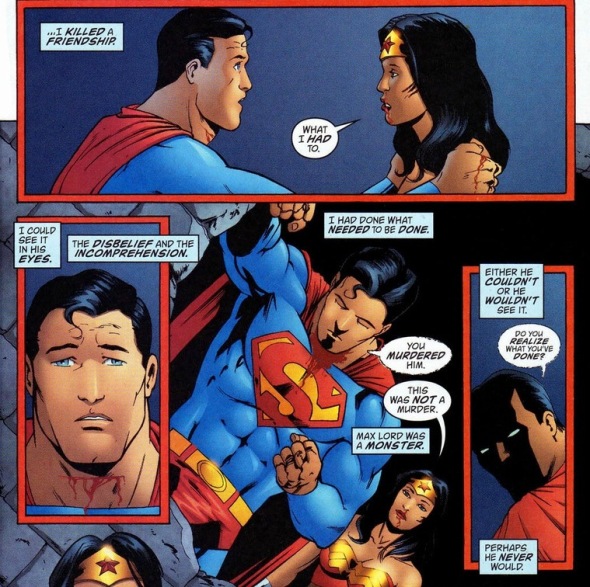 Nothing more painful than a sad Superman.  Maybe Batman will understand, after all he and Diana have had an on-and-off again relationship for years.

Mission complete?  Good idea for her to martyr her reputation and superhero standing to save Superman?  Though now you know Wonder Woman packs a punch, right?  Then at least it’s a happy ending for me.

6 Comments on “Wonder Woman vs. Superman”