We’ll pick up right where we left off on Friday.  Magneto’s clone has decided he’s going to do that whole replace the original guy fantasy all clones dream about in their little clone beds. 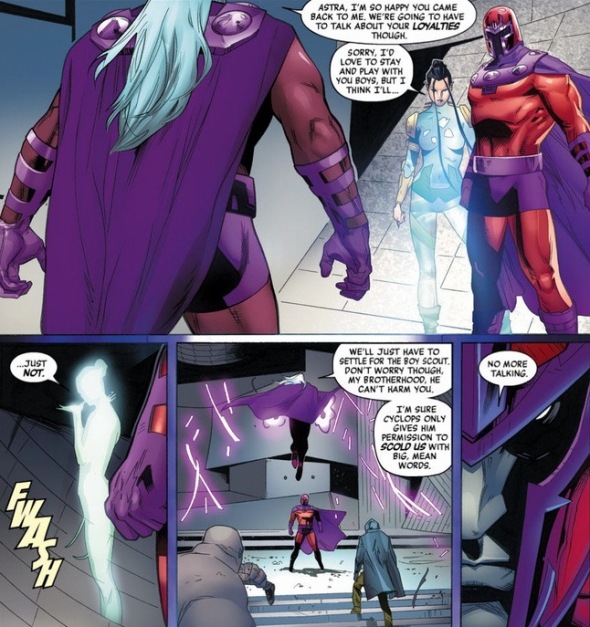 Pay attention to Magneto’s face during this battle.  That’s not the face of a hero.  This miniseries isn’t going to lie to you.  Like what Magneto does next: 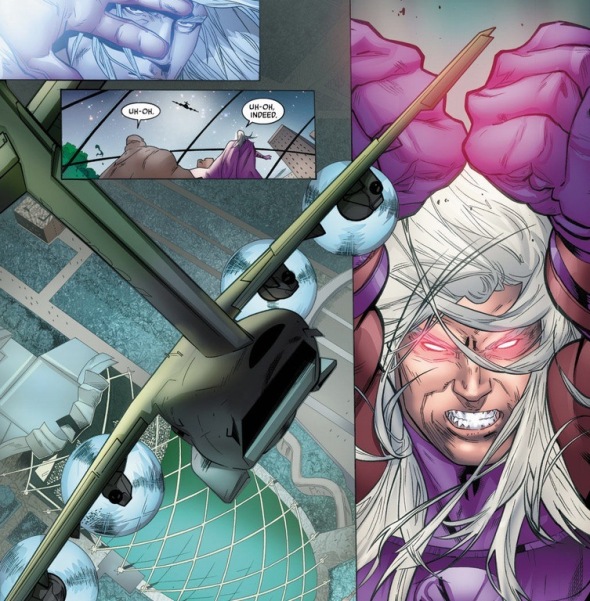 Do you know why Magneto’s constantly rated as one of the top supervillains of all time?  Part of it’s definitely because he can control giant planes and crash them into his opponents.  But the commanding large vehicles idea builds a following.  Time for Joseph to counter with some wheels of his own. 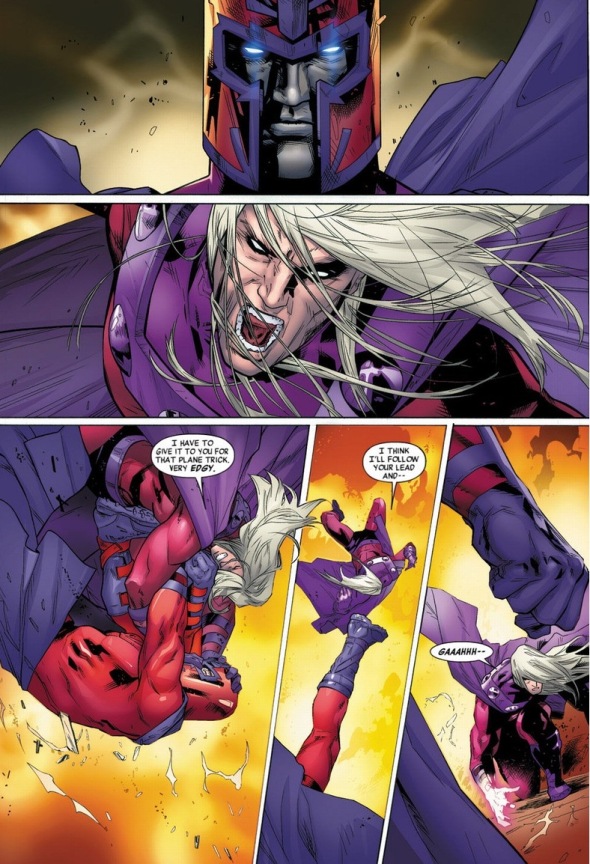 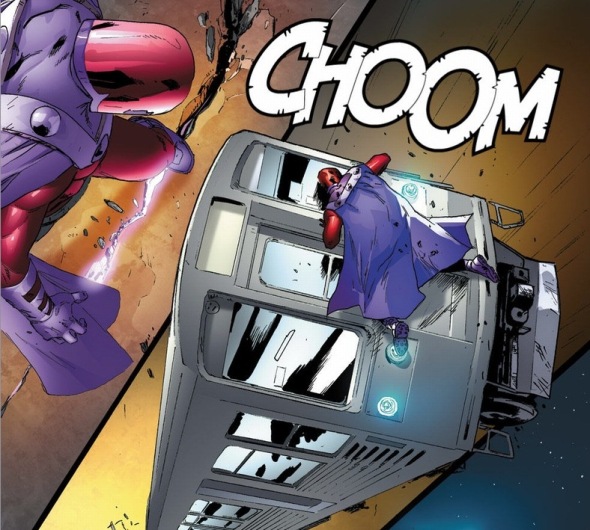 Trust me, this is the best train chucking fight you’ve ever seen.  I even cut a page or two.  The main difficulty in writing Magneto remains getting him into locations that happen to be Magneto-friendly. And by that I mean lots of big stuff to throw around.  Oh, I guess also the politics and philosophical situations revolving around Magneto’s personal beliefs and aspirations.  But mostly places to barrage dudes with transportation.

Why he saves those people is up for debate.  Certainly he’s at least attempting to do some good, as that’s kind of the whole point of the X-Men.  And Magneto isn’t about to let innocent civilians perish in this grudge match.  Maybe.  I don’t know, but he does end this fight with a single blow.  As the master of magnetism should. 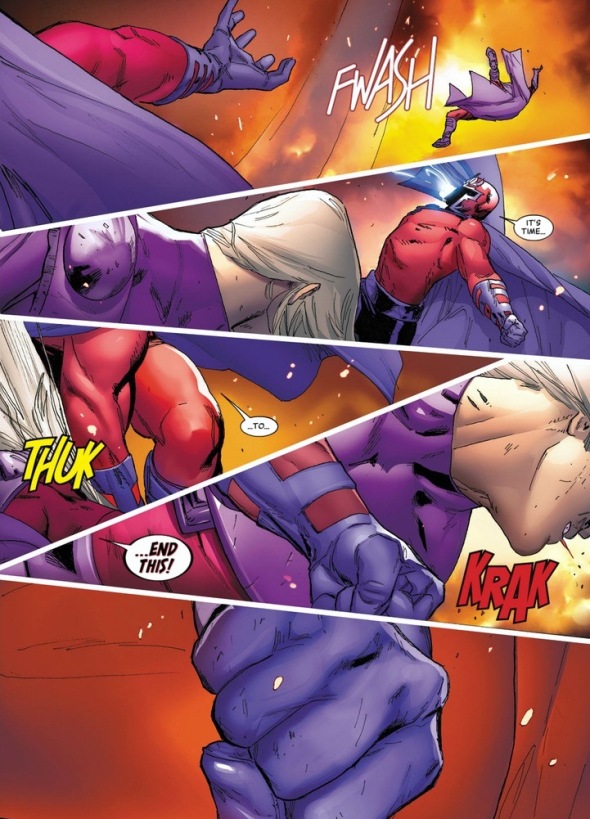 And now the final ramblings of a beaten supervillain.  It’s an important tradition.

Breathe in this moment.  Magneto has spent his entire adult life fighting humanity, spewing the exact hate-fueled rhetoric about humans as the man spills bile about mutants.  They’re angry and aggressive, but they’re still just civilians.  Professor X would turn the other cheek.  Cyclops would attempt to pacify the situation.  The Avengers would flee the scene.  And Magneto? 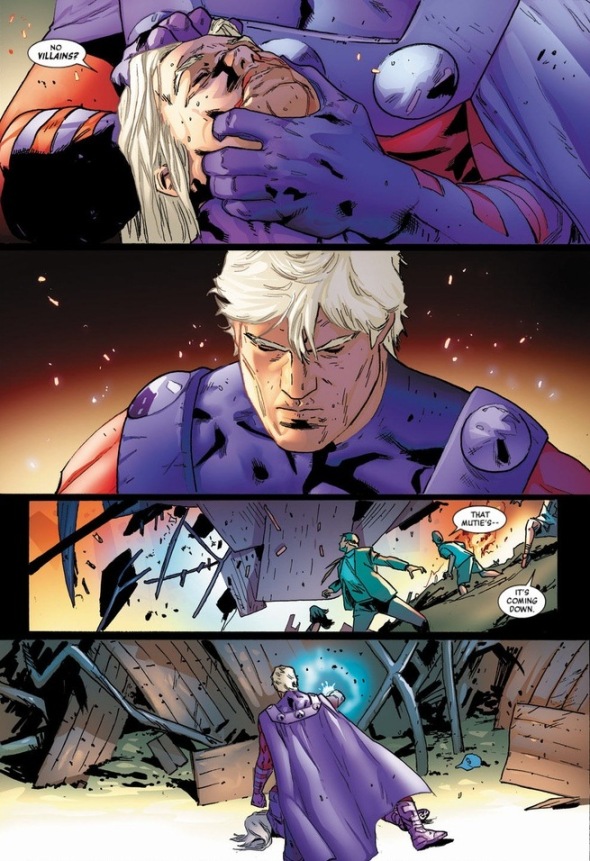 He slaughters them.  After all, that’s how Magneto’s dealt with humans for over a half century and old habits die hard.  Emphasis on the dying and hard.  A tragic moment certainly, but he’s never truly claimed the title of superhero.  The path to redemption and rehabilitation is long and arduous.  And for Magneto?  Baby steps: