It’s Morlun week!  Nope, not a drunken misspelling of King Arthur’s wizard.  The next four days will chronicle Morlun’s entire appearance in the Marvel universe: about 14 issues and 3 arcs.  He’s minor for sure, but this supervillain may be the most dangerous foe Spider-Man has ever fought.  I’m not just saying that to get you to read my article, I promise.

Now, because I’m not exactly sure how Fair Use applies to comic books (and the fights are practically every page of the issues), I’m only going to show you like a third to half the pages of their fights.  The goal of this blog is to get you to go out and buy comics anyway, so you have to plop down some money to see the whole thing (also the whole I don’t want to have to take down my website).  Before we start though, let’s talk about Peter Parker!

Spider-Man’s my favorite superhero.  I’ll freely and proudly admit it to friends, family, dates, etc.  But let’s be fair, he’s not exactly one of the heavy hitters of the Marvel universe.  He couldn’t take Thor or Hulk, for instance.  Heck, remember this scene from Amazing Spider-Man #534?

And keep in mind, Spider-Man’s far stronger, faster, and more agile than Captain America.  But regardless of his shortcomings, he’s relentless, smart, and has immense moral integrity.  I’m saying Spider-Man would beat the crap out of Hawkeye.

Anyway, we go back to Amazing Spider-Man #30-35, volume 2, written by J. Michael Straczynski and drawn by John Romita Jr.  This arc actually won the 2002 Eisner award for best serialized story, which are the Oscars for comics.  Parker just took a job as a science teacher at his old high school and life’s not too bad (a sharp contrast from around the previous 40 years of Spider-Man comics).  Then, he suddenly an old man named Ezekiel finds him, who just so happens to have the exact same powers as dear Parker.  More importantly, turns out Ezekiel has some inside information about an upcoming threat.  Y’know, Morlun.

Let me explain about Morlun.  Turns out certain superheroes and villains throughout history have been animal “totems,” essentially a combo between men and animals.  This Morlun has traveled the world hunting down these totems, because he needs occasionally to drain  “life force” from these totems in order to live.  I mean, a really good totem could subsist him for a hundred years or so, and unfortunately, Spider-Man fits the profile.  This story is actually the start of the idea that last from the first half of the 2000s that maybe Spider-Man’s powers are more magical than scientific, which is a super cool idea.

Anyway, Morlun found out what city Spider-Man lives in, waited until the Fantastic Four/Avengers were out of town, and attempts to draw him out.

I wasn’t lying when I said Morlun may possibly be the most dangerous enemy Spider-Man’s ever fought.  Y’see, besides hitting crazy hard, he has some extra scary perks.  Not a good day for Spider-Man.  Oh, but Morlun will tell you. 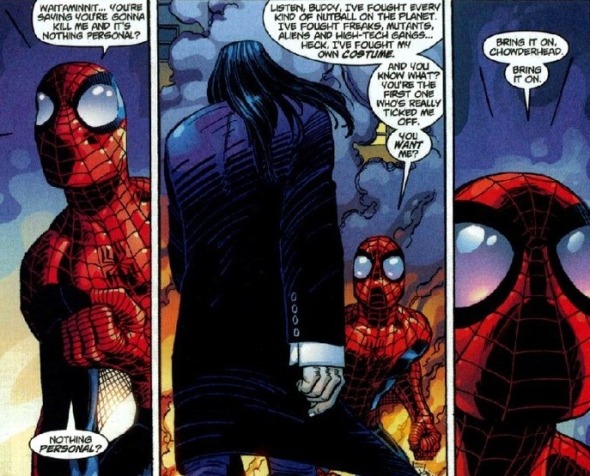 Spider-Man totally has this.  Check out this montage:

But I don’t think I’ve been clear enough.  What’s so hardcore about a well-dressed long-haired strongman?  I mean, he doesn’t have electric powers or a flying glider or anything.

I guess he can also absorb life force from normal people too.  Even nice people who just want to know if the man who fell fifteen stories isn’t dead.  Spider-Man doesn’t have a rage problem, but he’ll get plenty angry.  Remember this incident?  And sucking energy out of innocent civilians certainly helps rile our hero up.

If you like punching, this arc is about 90% punching.  Just saying. 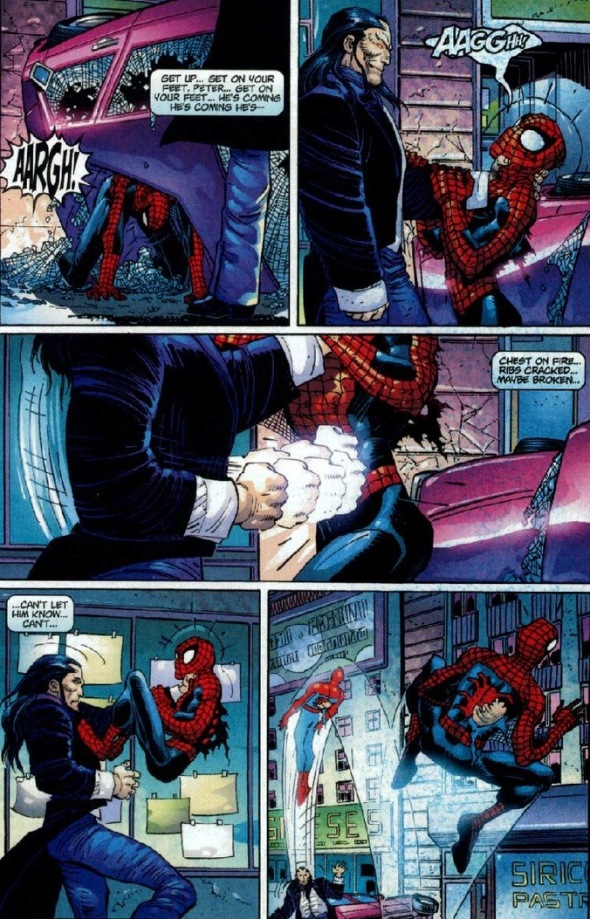 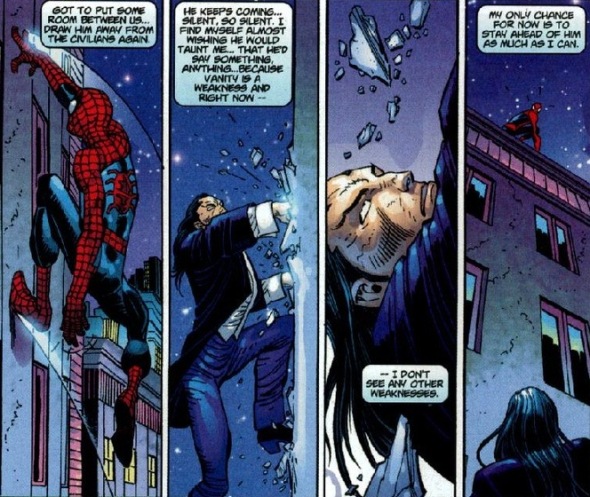 So what’s the problem with running away for a little bit to recover?  Well, two main setbacks.  First, Morlun can track him.  And second, the minute Spider-Man gets too far away, Morlun’ll kill civilians and wreck the city until Spider-Man fights him again.  And sadly, for all his spider-powers, spider-healing is not one of them.

Yes, let’s cheer together!  Spider-Man’s fought hundreds of bad guys thousands of times and he’s come out on top every single time.  One vampire-ish dude in a trench coat ain’t going to be the one who does him in.  Though as you know, Morlun fights dirty. 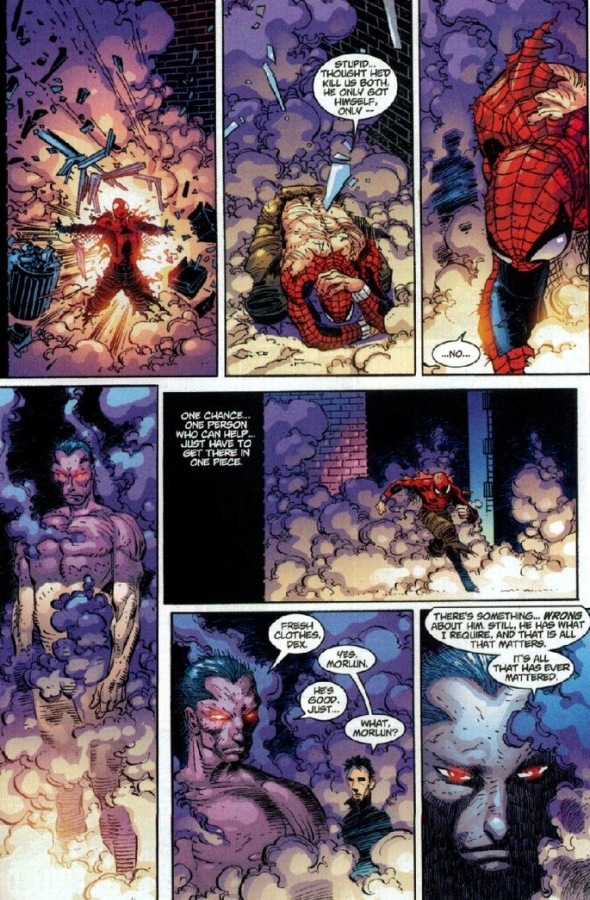 Sure, Morlun only has one henchman, but to be fair, that’s one more than you or I have.  Unless you are a supervillain, in which case I apologize and please don’t hurt me.

Can you guess who Spider-Man’s mysterious benefactor might be?  I’m going to spoil it: Ezekiel. That dude runs a major corporation, has extensive knowledge about our antagonist, and has had spider-powers for decades.  He’ll definitely have some good advice.

Well, that sucks.  To be continued indeed!