Avoid fighting Deathstroke the Terminator.  Sure, he’s the arch-nemesis of the Teen Titans, best known as the team of teenage sidekicks.  Also, he’s older than all the Teen Titans put together.  But still, he’s cool.  Master assassin, enhanced physical attributes, 90% brainpower!  And more importantly, whenever someone asks about the toughness of Deathstroke, fans always bring up that one time he took on the entire Justice League at once.  Luckily, we’re going to be reading that today.

Premiering in 1980, Deathstroke (real name Slade Wilson) learned his killing skills in Vietnam. Judging from his gorgeous head of white hair, that bit of his history still holds true today making him close to 70 years old.  To be fair, with that little army experiment he undertook (superstrength gets handed out like cheap candy in the comic universe), his age remains unimportant.  Oh, and his wife shot him in the eye.  It happens with assassin spouses.  You’ve seen Mr. and Mrs. Smith.

We pick up in Identity Crisis #3, written by Brad Meltzer and drawn by Rags Morales.  The supervillain and current amnesiac Dr. Light, with a genius intelligence and I guess, powers to control light and stuff, is wanted for murder.  Did he commit it?  Not important.  On the run, he hires Deathstroke to protect him.

Okay, let’s quickly go over Deathstroke’s opponents.  You know the Flash (superspeed) and Green Lantern (power ring) already.  Black Canary, the blonde in fishnet stockings, can create an ultrasonic blast by screaming.  Zatanna, the other lady in fishnets, can cast magic spells by reciting them backwards.  Hawkman, who you can probably pick out on your own, has a magical mace.  Oh, and the flying thing.  The Atom, who you can kinda see on Black Canary’s shoulder, gets to shrink himself while maintaining his normal physical strength.  Sneak punches and stuff.  Green Arrow, the Robin Hood-esque dude with wacky facial hair, never misses with his bow and arrows.  Essentially, Hawkeye from The Avengers movie.  Also, he’s our narrator for this story, hence why all the text boxes are green.  There you go, all caught up.

I think Batman, Superman, Martian Manhunter, and the others you know are out having a drink or playing darts or something.  I don’t know.  Anyway, keep in mind that this ain’t a tag team fight. Nope, Deathstroke has to fight them all at once.  The way a master assassin should. 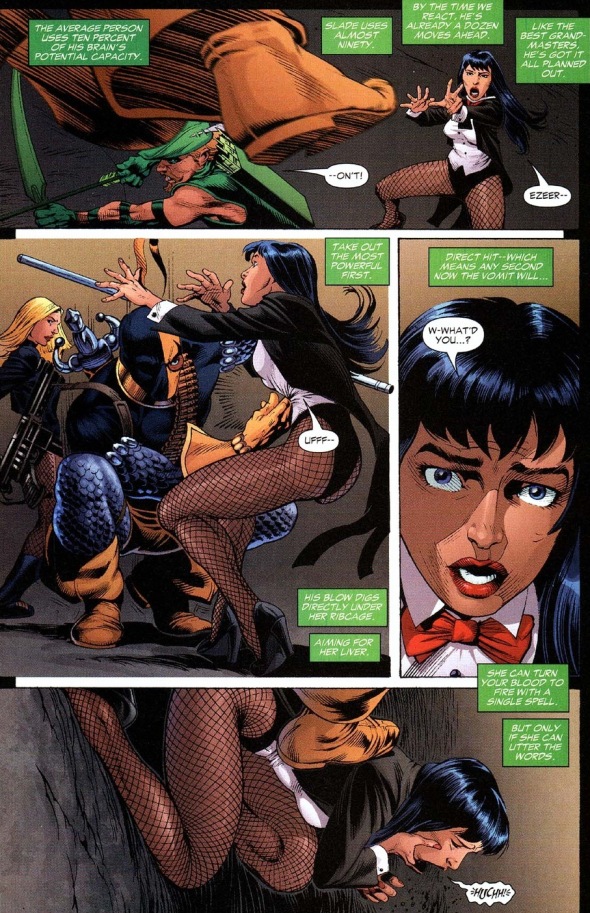 You see the problem with battle armor consisting of half a tuxedo?  Bowties are great for charity balls, but absolutely awful for protecting oneself from old-timey mercenaries.

If Batman wore an ammo belt, carried around a broadsword, and killed superheroes, you’d have Deathstroke.  Though, I hate to bring up uniforms again, but at least the half-tuxedo covered Zatanna’s torso.  Hawkman ain’t even wearing a shirt.  Three down, four to go.

Five down, two to go.  Not bad for six pages into the issue.  Remember who’s left?  Deathstroke certainly does.

I understand the whole shrinking superhero usefulness when say, compared to Superman.  But when The Atom can become microscopic, run inside someone’s ear canal and punch his or her brain with the exact same impact as if he were full size, The Atom certainly has his uses.  Unfortunately, being tiny also brings with it all those obvious weaknesses.  Like this:

If you’re complaining that none of JLA’s heavy hitters fight in this rumble, you’re forgetting the space cop.  Y’know, Green Lantern, who can create anything simply by wanting it.  The same member of the Green Lantern Corps who can change the entire course of wars just by showing up on an alien planet. The most famous police force in the galaxy, roughing up bad guys for over three billion years. 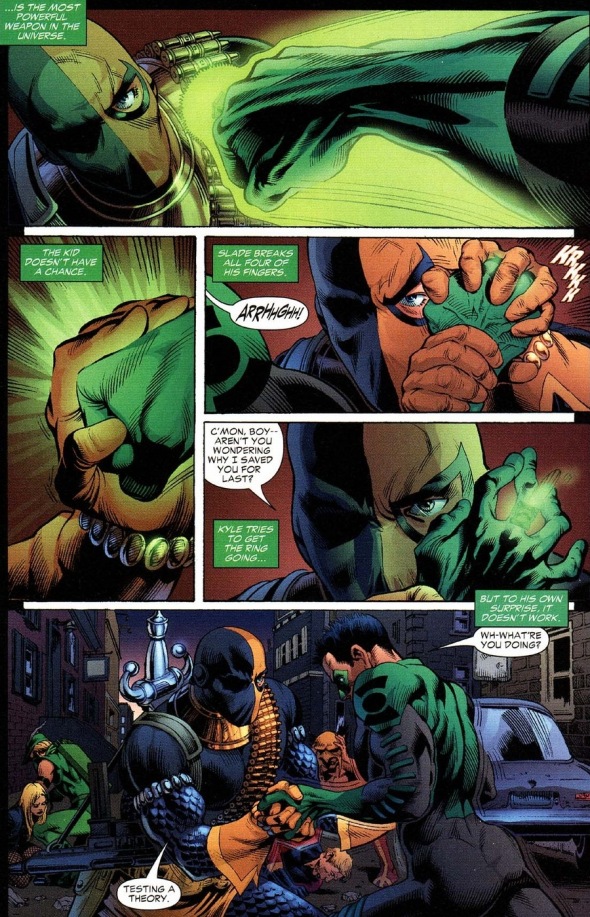 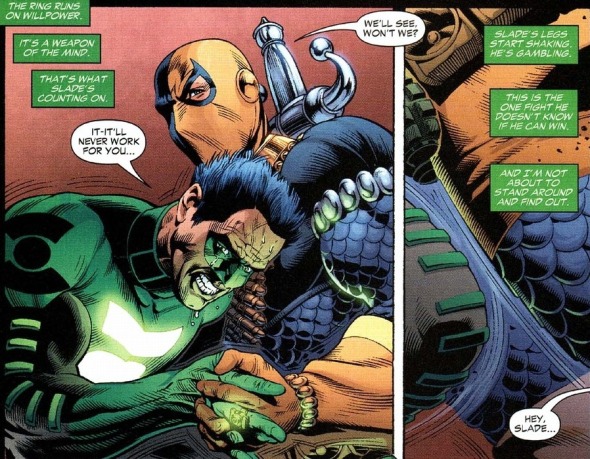 In my personal opinion, which has about as much credibility as any other yahoo on the Internet, it doesn’t fare well for Deathstroke’s little bet.  Pretty sure that since the Green Lantern rings choose their hosts, it ain’t going to work for Old Man Vietnam’s hostile takeover.  Though I guess that’s up to the writer.  Either way, doesn’t really matter. 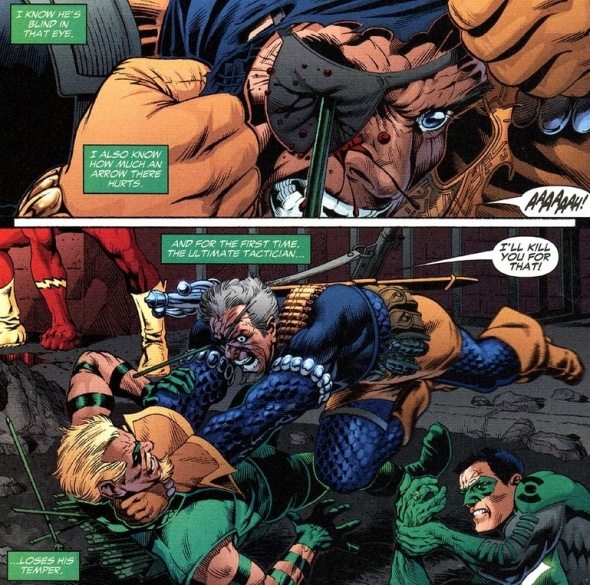 As you can imagine, the fight takes a drastic turn in favor of the good guys.  Because if Deathstroke kills the half the Justice League, the mood of the DC universe would shift dramatically.  Plus, readers would have to plop down a small fortune for all the resurrection events a few months later.  Y’see, since Deathstroke’s whole plan relied on expert timing and crowd control, deviation to smush Green Arrow’s face gives a chance for the other six good guys to recover.

As we wrap up our article in a few images, we’d be remiss to forget about Dr. Light, hanging out in the corner.  Magical amnesia can sometimes make supervillains batty.  Especially when that triggers PTSD flashbacks. 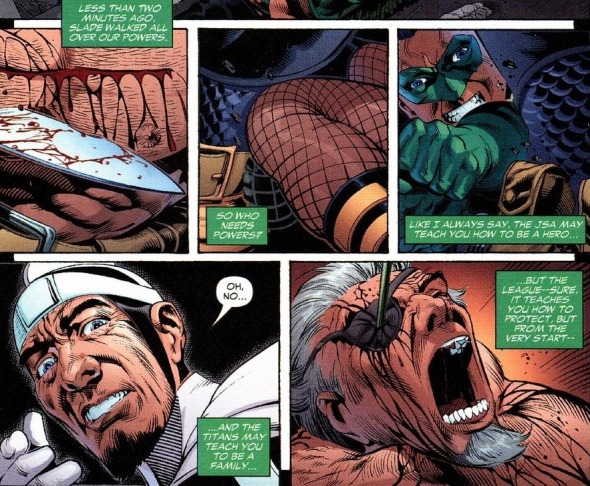 With that, our villains flee and the fight ends.  Super cool battle, right?  You can go read the Identity Crisis event for what happens next.  Like daddy Superman flying in to fold his arms and shake his head in disappointment.