Actually, Bucky Barnes is still sort of Captain America.  The last throes of an obligated dream.

A few years, Captain America was shot and lost in time (happens more than you think).  Bucky, recently returned from the dead as Winter Soldier, took over the role.  Unfortunately, in the past seventy years since World War II, he had been brainwashed as the most dangerous assassin in Mother Russia.  So when his secret killings of top American officials and such came to light, he was arrested not only as a former Soviet spy, but also in Russia as a traitor to their country.  Russians just don’t appreciate their people becoming the moral and patriotic symbol of their biggest enemy.

We start our arc with Bucky trapped in a Russian gulag in Captain America #616-619, written by Ed Brubaker and drawn by five awesome artists. 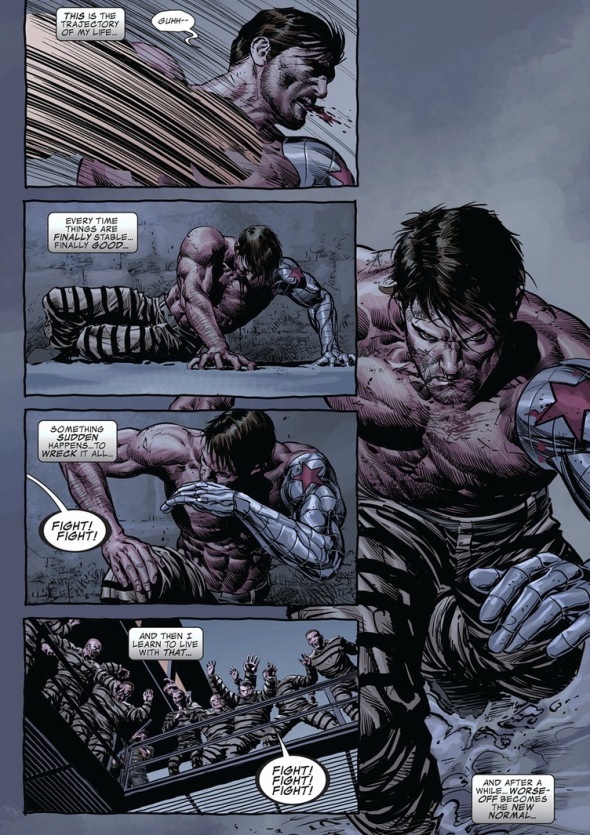 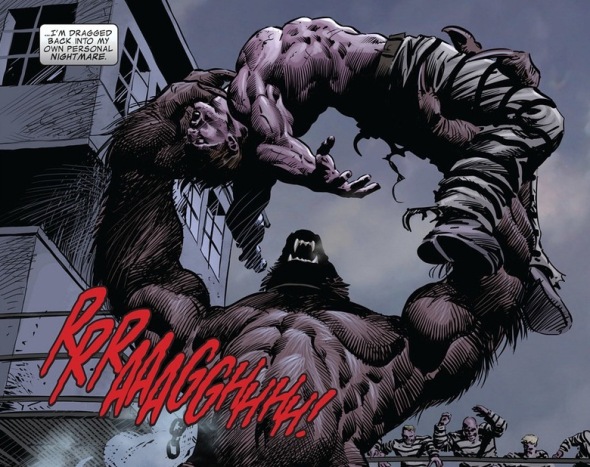 You mean to tell me that American prisons don’t have prisoners battle in gladiator fights against superhuman bears?  That’s Ursa Major, the Russian superhero I’ve covered in a previous article.  And despite any real need for it, the arena battle has a totally reasonable explanation.

Bucky being super famous and all, the Avengers don’t have the diplomatic authority to rescue him and Russian officials can’t just go and have him executed.  Politics are tricky, even for those who make their living by punching.  So the prison warden has an idea.  A mischievous idea.

How about that?  Unfortunately, Bucky used to be Captain America, and that dude’s fought Hulks. Versus a bear?  That’s park ranger stuff. 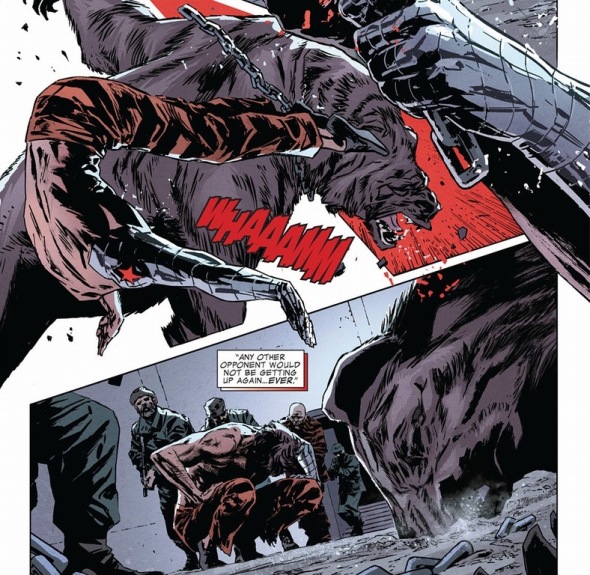 Bucky fights like three battles.  You can read the book for the rest.  But I’d be a horrible commentator if I didn’t show you the mandatory flashback of past crimes compiled in a cool panel page.

See?  He did a bunch of awful stuff while brainwashed, the haircut not included.  He certainly deserves to be punished, and Bucky wouldn’t mind serving out his time in peace.  But you know that can’t happen because you read comic books. 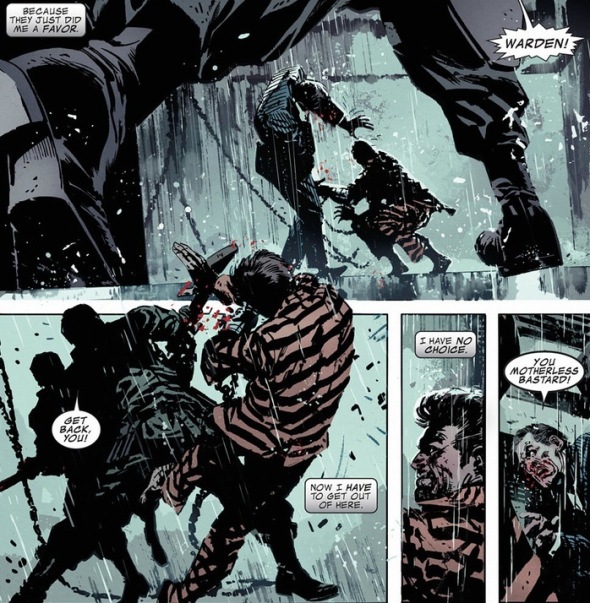 Winter Soldier has mastered dozens of martial arts and served four years on the front lines of World War II as a teenager, but he also doesn’t have any superpowers.  That metal arm is just that.  Still, can’t break that superhero spirit. 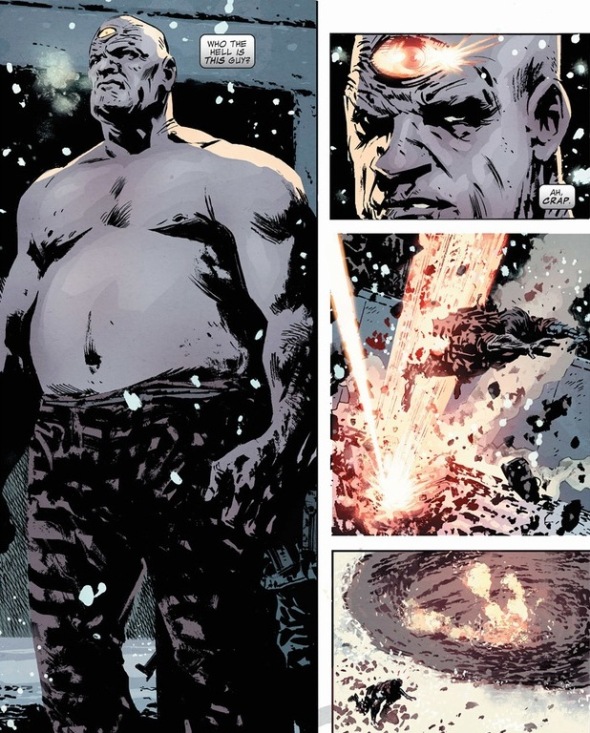 Yup, no winning this one.  Time for the jailbreak advertised in the title of this article.

The best part of the comic book reader is the complete suspension of disbelief.  We have no problem that gods with hammers and giant green rage monsters run around totally scientifically sound in the Marvel universe.  When we see a giant Russian with an eye on his forehead that shoots lasers, not one of us will bat an eye.  Winter Soldier fights a bald Cyclops supervillain.  Sounds good to us. 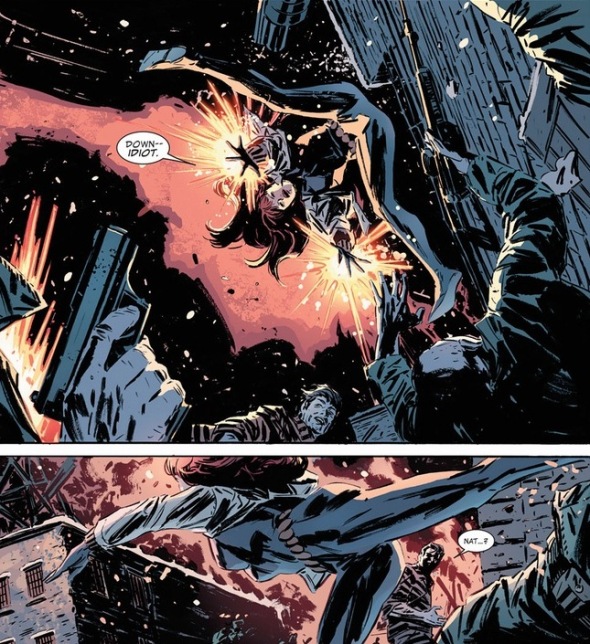 Some hidden benefits of seventy years of Russian brainwashing?  Black Widow being your sexy co-worker, for one.  She came from the same program, which teaches espionage, deceit, and sass.

Happy ending!  Bucky escapes the gulag to live his life as a fugitive of the law with his rebellious record stricken only in his death.  Luckily very soon after this, he gets fake-killed by Sin during Fear Itself.  Not a bad way to fake-go.