We know that superheroes all possesses different levels of powers.  Some can move moons while others can backflip really high.  The inequality of powers forces writers to think of creative ways for their lesser powerful heroes to win their fights, and comics are better for it.  But sometimes the best path to victory is to avoid the fight altogether.  Not so with this batch of today’s battles.  You’re about to witness some superheroes who make some very poor decisions.

Let me be clear: none of our protagonists win.  They’re going up against opponents who massively outclass them in every single way.  And the best part?  Their opponents know it.

Round 1: Punisher vs. Spider-Man

If you think about it from a statistical point of view, the Punisher can’t compete with Spider-Man. Peter Parker’s probably about three to four times faster than him, at least thirty times stronger, and he has that unfair spider-sense to avoid, say, a vigilante’s machine gun spray.  In the critically acclaimed Punisher: War Zone #1, written by Greg Rucka and drawn by Carmine Di Giandomenico, fans cheered for what may be the most accurate fight between the two in the history of comics.

Oh, and why are they fighting?

That’s why: Spider-Man’s unbridled hatred and unrelenting frustration for a man who’s killed more people than times Spider-Man has chafed in his skintight outfit.  In Punisher Max, I believe they list the official murder count for Frank Castle as over 2000. 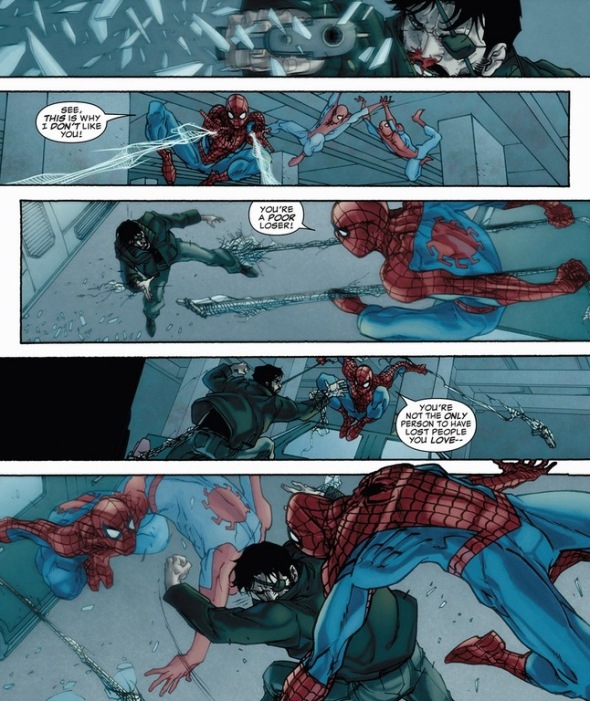 I think people forget how durable Spider-Man is.  He can’t exactly shrug off an explosion or impalement, but he’s certainly not going to be taken down by an old man’s punch.  Time to let Castle know that.

On an unrelated note, have you ever wondered the stink coming off the Punisher?  I can’t imagine he has more than one or two skull shirts, and most of his outfits look like Goodwill rejects.  Add that to his usual residence of hidden bunkers and abandoned warehouses, and we have a man whose smell probably scares away even dogs.  Still, good job with all that mobster vengeance stuff.

Round 2: Slam Bradley vs. Batman

I’ve covered Slam in a previous Catwoman post, but if you’re not caught up, he’s an old-timey detective from comics of the 1930s.  He recently reappeared in Catwoman volume 2, apparently having aged in real time.  Fortunately for Slam, Catwoman tends to make awful choices when under emotional duress and after a particularly tragic Black Mask incident, she started dating Slam.  Well, dating’s probably too strong of a word.  Anyway, Batman would like to have a few words with his former paramour’s new paramour in Catwoman #22, written by the fantastic Ed Brubaker and drawn by Nick Derington & Cameron Stewart.

To fully understand just how badly Slam is matched up against Batman, he actually has a son that’s Batman’s age.  And yes, Batman’s comment was unwarranted, but being a jerk comes with wearing the cowl. 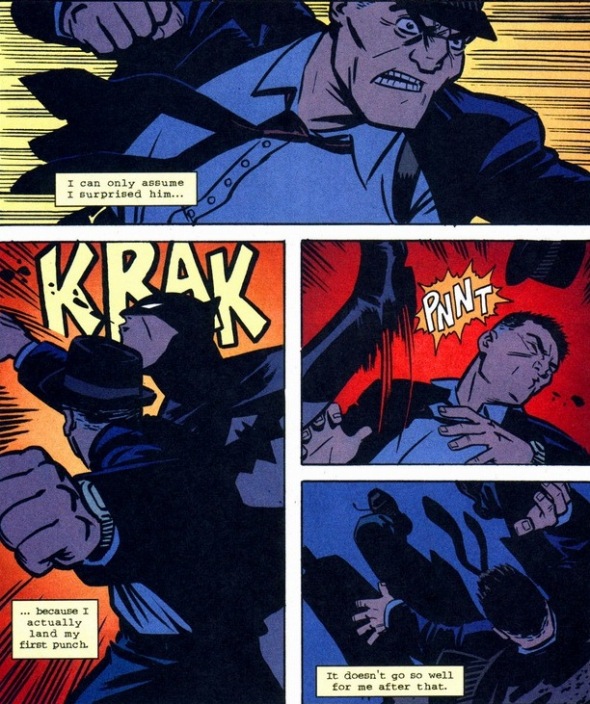 Sure, Slam is a tough guy for his age, but Batman’s not only in his prime, he’s also mastered dozens of martial arts, wears several layers of armor, and has single-handedly scared the piss out of every criminal in Gotham.  Poor Slam. 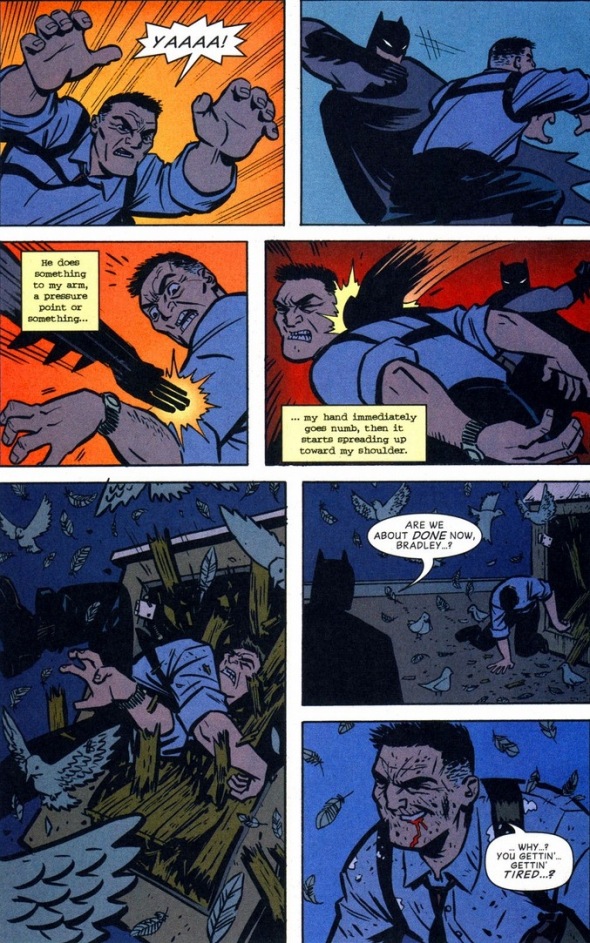 You know you’ve done poorly when Batman’s laughing at your performance.  Especially because Batman has no sense of humor.  Having parents murdered in front of you will numb your ability to let go and giggle once in a while.  So, I guess happy ending?

Round 3: Red Hood and the Outlaws vs. Superman

Jason Todd, the second Batman and current sorta superhero Red Hood has been adventuring with a few buddies since the DC universe rebooted itself.  I’ll happily admit it: Todd’s team has major talent, despite the other members being Green Arrow’s disgraced sidekick and an over-sexualized alien princess.  Though they sometimes make horrendous tactical errors.  Like threatening the Man of Steel in Red Hood and the Outlaws #14, written by Scott Lobdell and drawn by Pascal Alixe.

If you want to know how little chance Red Hood and the Outlaws have against the most powerful man in comics, even Superman can’t believe they’re attempting to fight him.  It’s like their strategy is to do something so stupid, Superman needs a moment to comprehend the sheer stupidity of the decision just made.  Seriously, Red Hood’s strategy is to shoot him with bullets.

Can they pull this off with a gunk arrow?  No, of course not.  Besides being practically invulnerable, Superman also possesses the ability to make up powers on the spot.  For proof, see every single Superman comic from the 1940s.

The fight stops abruptly here, if just because the series will have a tough time continuing the story if all the major characters have their skulls caved in.

Round 4: Swarm of archers vs. Hawkeye

In one of Clint Barton’s solo adventures, he travels to Laos to recover a lost Jesus pillar.  Every word in that sentence is true.  He definitely finds it, but turns out the escape might be a bit harder than he thought: 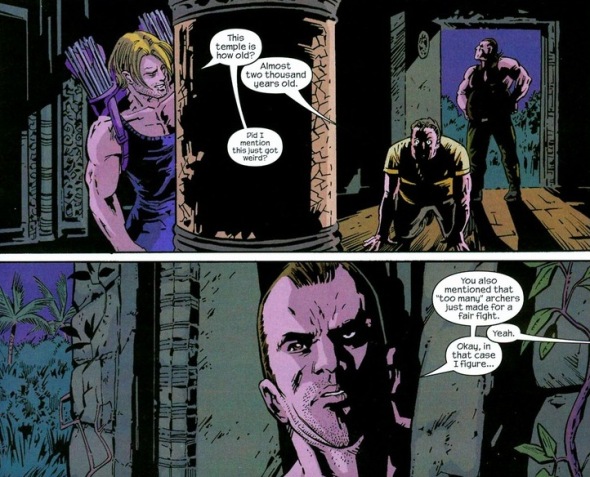 Normally, a hundred soldiers going up against one non-powered man wouldn’t be so scary.  Except they’re going up against a card-wielding Avenger, a man so skilled that an actual god trusts Hawkeye to back him up.  Trust me, you’re about to witness a massacre from Hawkeye #5-6, written by Fabian Nicieza and drawn by Stefano Raffaele.

By the way, Hawkeye’s body count?  Zero.  Third degree burns?  Most of them.

This story’s canon too, meaning Hawkeye isn’t dreaming he pulled all this off while deep under the covers snuggling his bow.  Though you know what else Barton shot up with his arrows?  Cultural insensitivity, but that’s a problem for another day.