A vacation ambush with Cyclops

I’m a bit sick today, so let’s skip some complicated back story, a melodramatic conspiracy, or complicated love triangle.  Let’s just enjoy a superhero brawl.  Cyclops will do.

As Professor X has been slowly phased out of X-Men leadership the past decade or so, Cyclops (real name Scott Summers) effectively and confidently took up that mantle.  Then he transformed the X-Men from a school to an army.  Bigger threats attacking mutant-kind, I guess.  Before that in 2001, back when he was still with Jean Grey, he received his own miniseries Cyclops #1-4, written by Brian K. Vaughan and drawn by Mark Texeira.  Here’s a scene from the first issue. 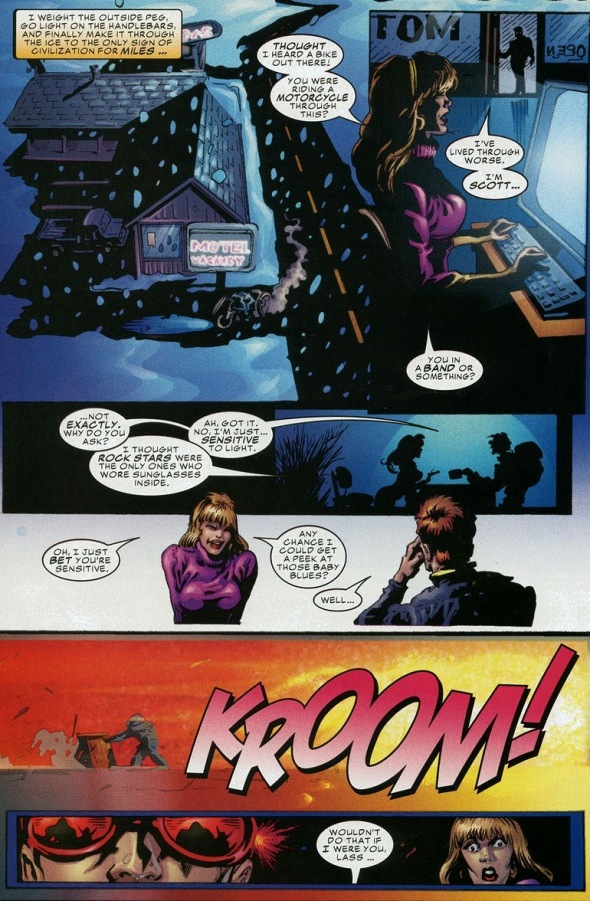 We all know by now that superheroes can’t have vacations.  A supervillain or robot or parasite will inevitably burst through the door for our hero to rough up. 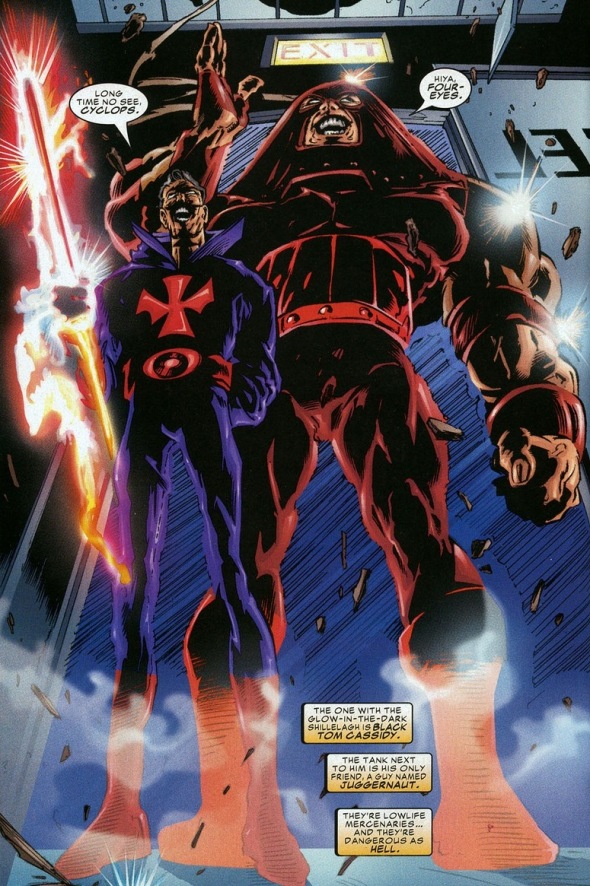 Cyclops has the odds badly stacked against him.  Juggernaut’s practically invincible and Black Tom Cassidy has similar powers as Cyclops. 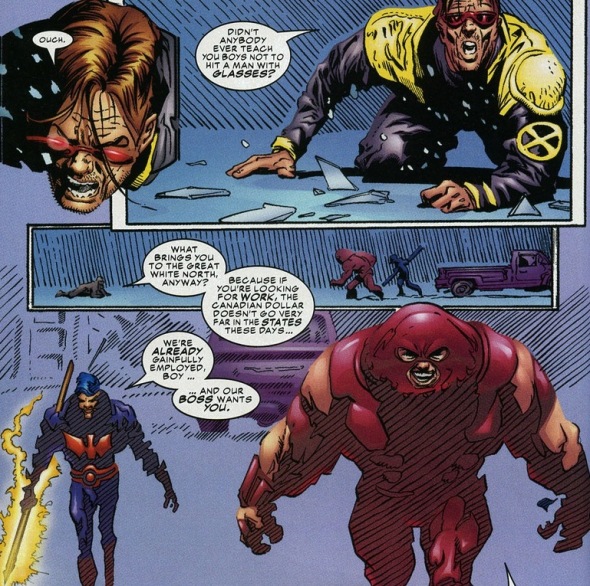 Yes, Cyclops can really only shoot eye lasers.  Nowadays, where everybody can fly, lift tanks, and survive nuclear blasts, I guess eye lasers don’t really stack up.  Except Summers has been fighting baddies since middle school.  And while my X-Men knowledge may not be as extensive as other superheroes, I do know that very few characters are capable of out-thinking the X-Men leader. 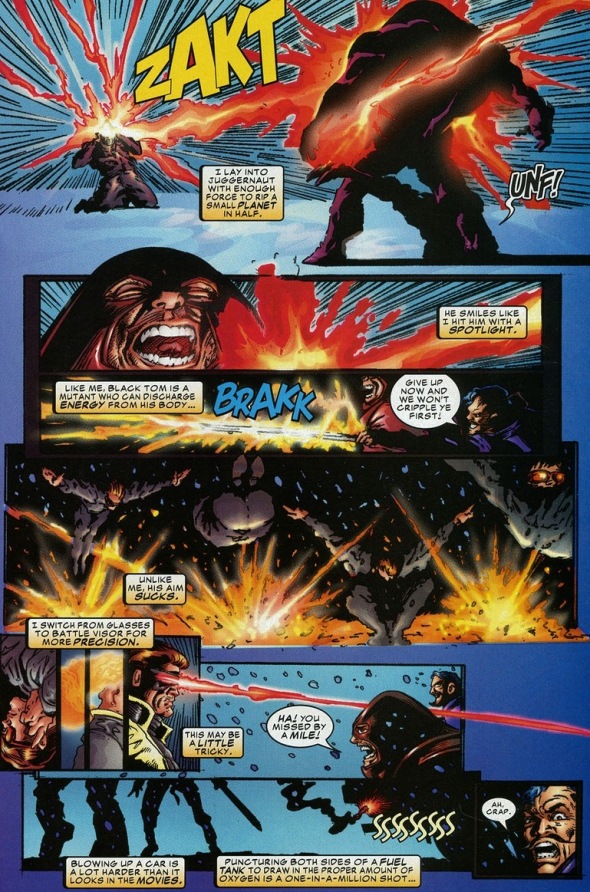 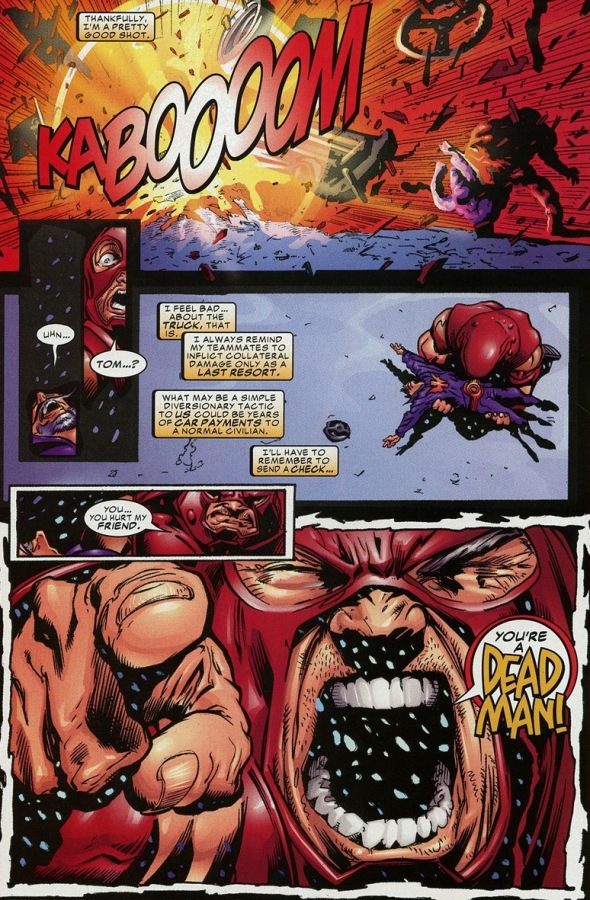 No one can take Juggernaut in a fist fight (except maybe the Hulk), but his intelligence borders on the pity of sympathetic doctors.  I’m saying he’s dumb. 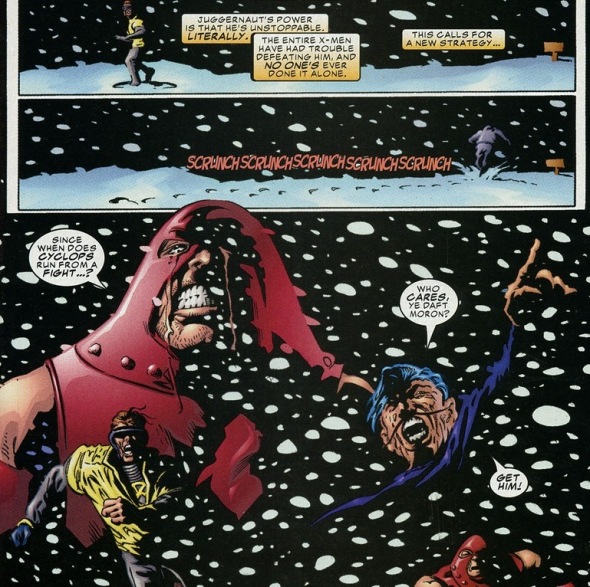 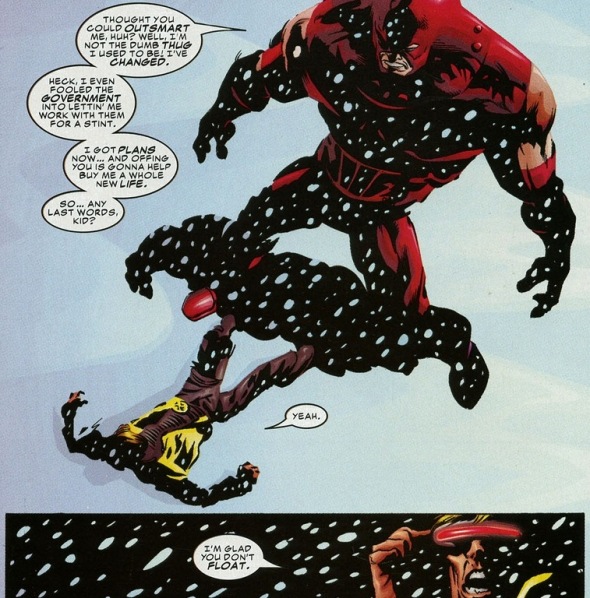 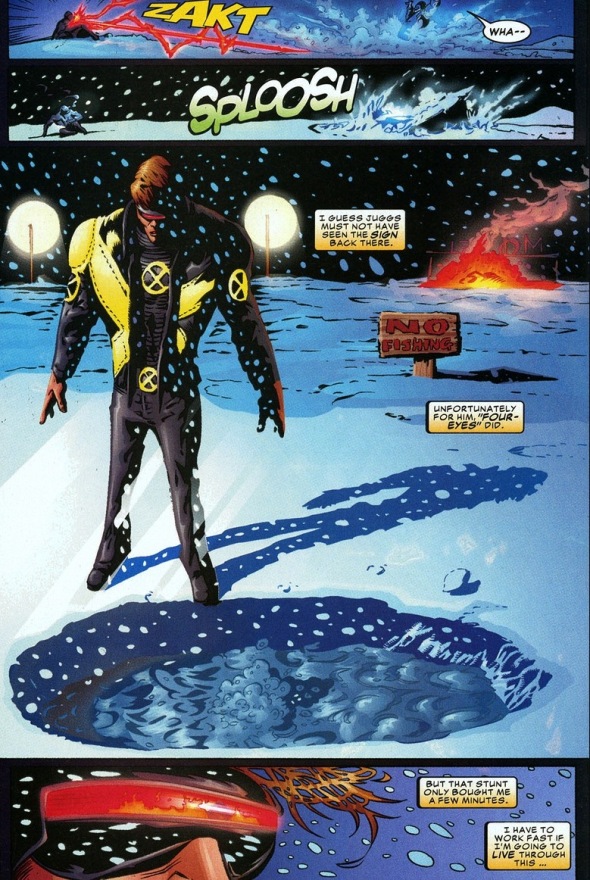 If you’re confused by Black Tom Cassidy, you’re not alone.  The dude’s a minor bad guy at most. Though he is Irish, which I assume makes for some welcome diversity in the comic book world.  Too bad no one takes the man seriously. 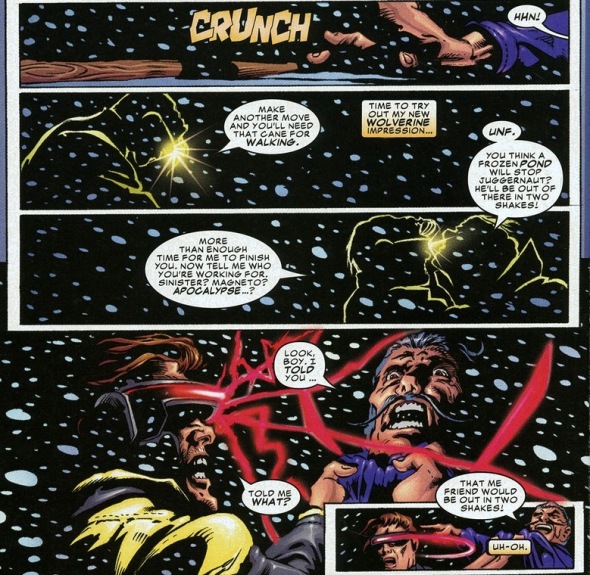 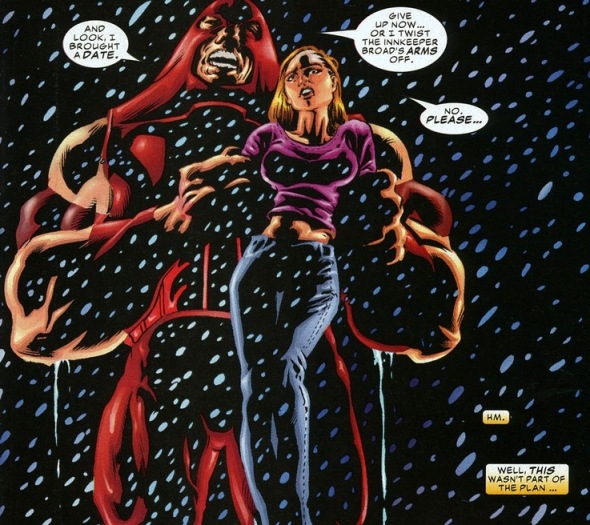 Now things get interesting, right?  If the full force of laser eyes can’t scratch Juggernaut, then him with a hostage pretty much guarantees victory.  Except he’s up against Cyclops, who has been blessed with serious brains to go along with his boyish good looks. 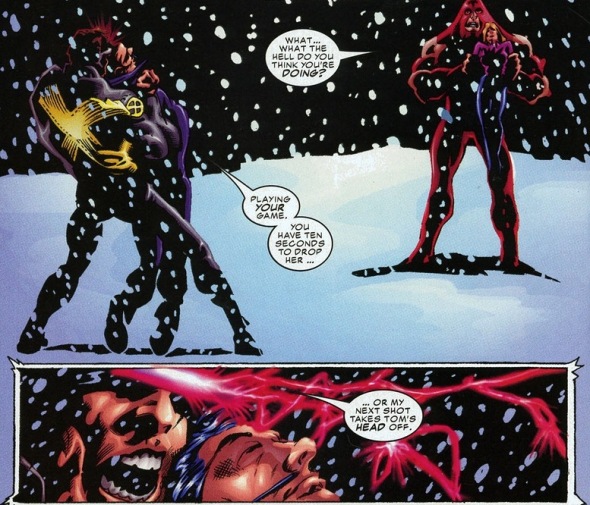 Let’s be fair.  Juggernaut knows the X-Men aren’t killers.  Except for Wolverine.  And Psylocke.  And Nightcrawler.  And Cable.  A few more I’m missing.  Okay, so there’re are a few exceptions.  But Cyclops?  Totally not a merciless killer, but definitely a merciless actor. 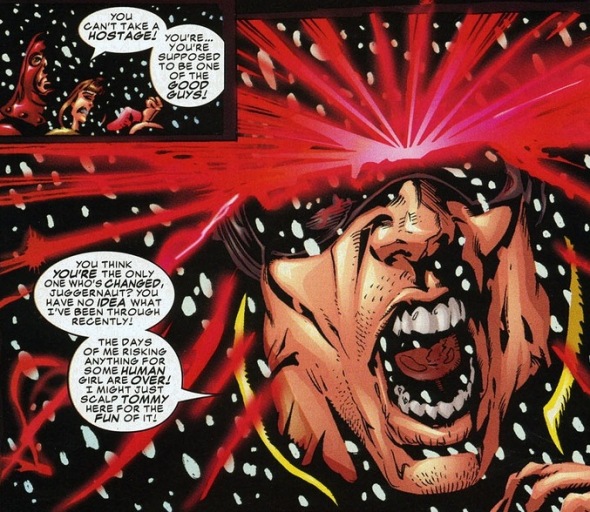 And truthfully, Cyclops has been through some crazy stuff recently.  The early 2000s had some crazy X-Men stories.  Anyway, Juggernaut hates losing fights, but he hates losing friends even more.  Giant of a man, giant of a heart. 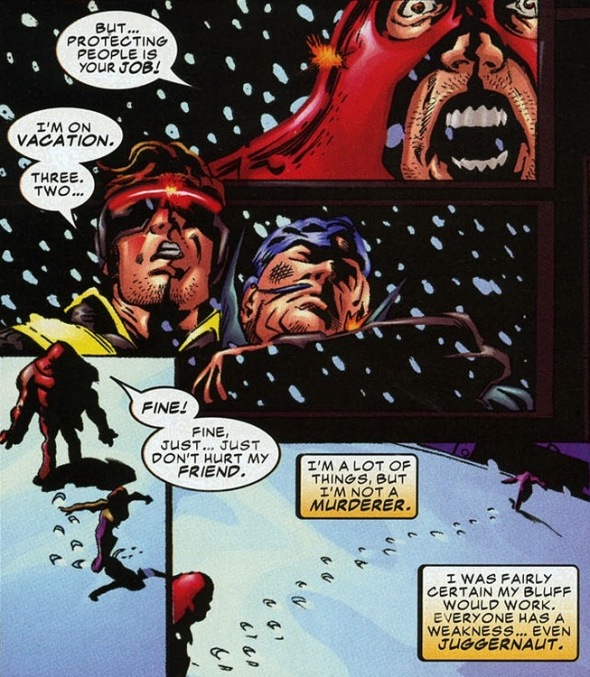 Battle over.  Next up, the three of them giggle together among hot cocoa and Snuggies.

3 Comments on “A vacation ambush with Cyclops”