← Tigra’s vengeance on the Hood
A vacation ambush with Cyclops →

Batman and the Alfred gamble

People downplay Batman’s intelligence, but the dude’s a super genius.  The world’s greatest detective title can’t be bought at an auction or space bazaar or anything.  While mysteries have been a staple of Batman’s adventures since his introduction, victory for the Dark Knight is always just one crossword puzzle or laser death trap away.  Until 1992, when Victor Zsasz was introduced.  A serial killer who carves a tally onto his body for every victims, he has no rhyme or reason to his attacks.  Complete and utter unpredictability.  What a pain.

In Detective Comics #815-816, written by Shane McCarthy and drawn by Cliff Chiang, the killer gets loose again.  Revolving door of Arkham, etc.  You’ve heard it all before. 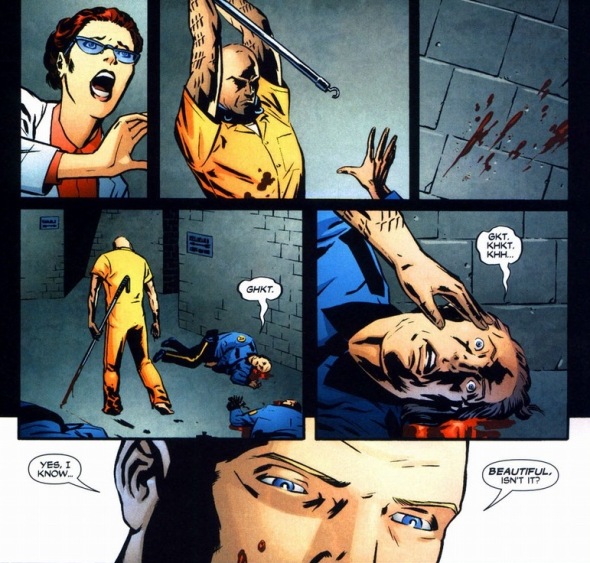 And like every time Zsasz gets loose, Batman can’t find him.

I love that Alfred has a blue tooth.

One of the best parts of reading Batman is the constant reminders of just how much Batman hates being Bruce Wayne.  If he didn’t have billions of dollars to spend and a company to run, he’d never take off that costume. 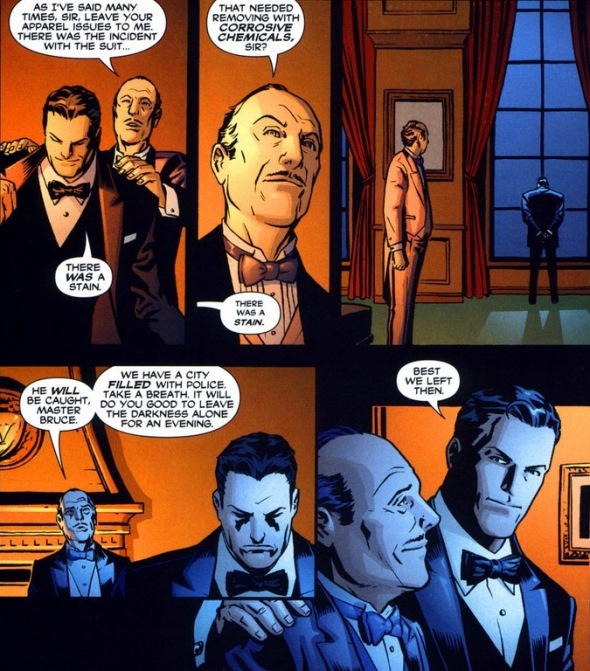 Hey, remember that whole thing about Zsasz not being able to be found?  Oh, he’s around. 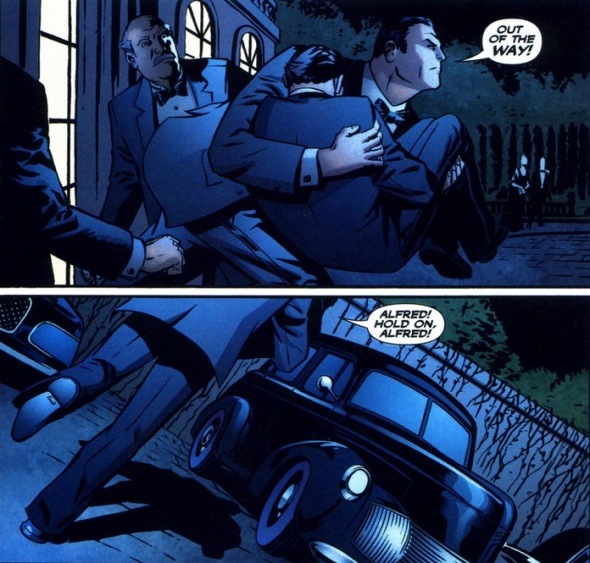 Alfred survives, of course, but now Batman has to make a choice.  Y’see, there is one way to know where Zsasz will show up.  The supervillain doesn’t do unfinished business — Zsasz has murderer OCD. 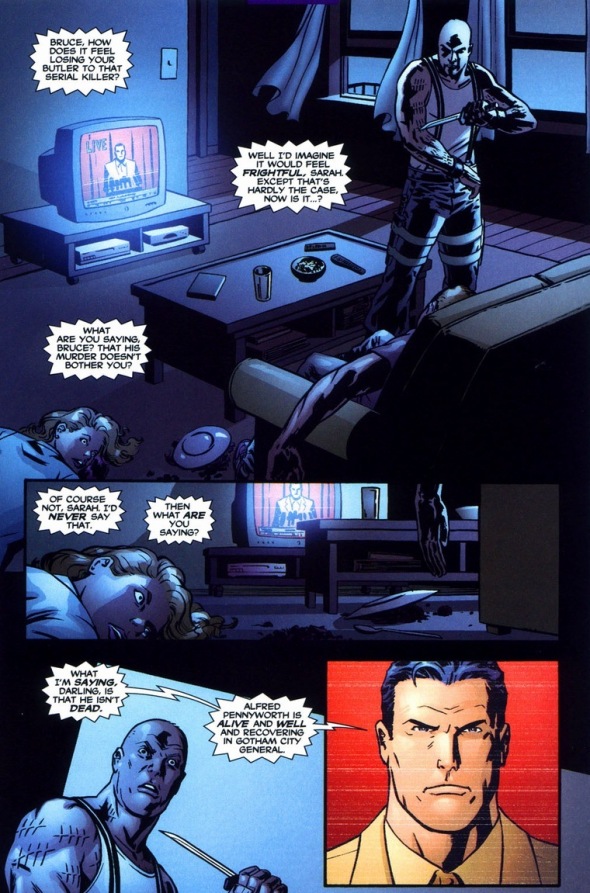 Obviously, Zsasz is coming for Alfred.  All Batman has to do is get to Zsasz first, which wouldn’t be so hard if the stakes weren’t majorly high.  Plus, he didn’t exactly get Alfred’s consent either.  Luckily, it’s a long walk to the hospital, leaving plenty of delays along the way to murder people.  Patience and dark corners does Batman good. 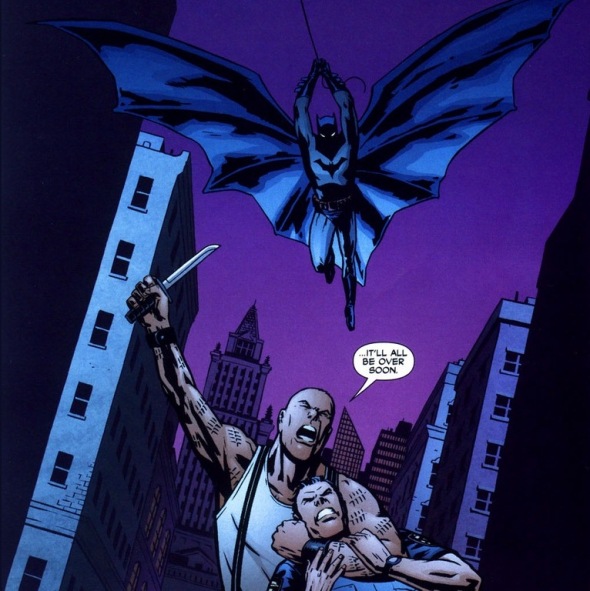 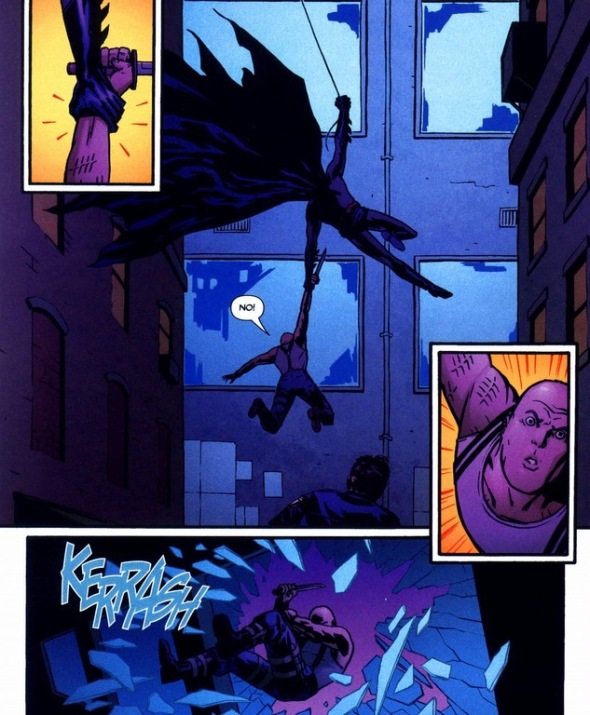 Batman’s a terrible conversationalist.  I always wonder why supervillains get so obsessed with him when he spends most of his time grunting rather than bonding and swapping stories.  Now Nightwing, that guy will monologue you to submission.  But from a tactical standpoint, the Dark Knight’s certainly not above taunting.

Round two of their fight involves a cool car chase.  Buy the book for the whole thing, though here’s two pages of Batman jumping into the moving Batmobile. 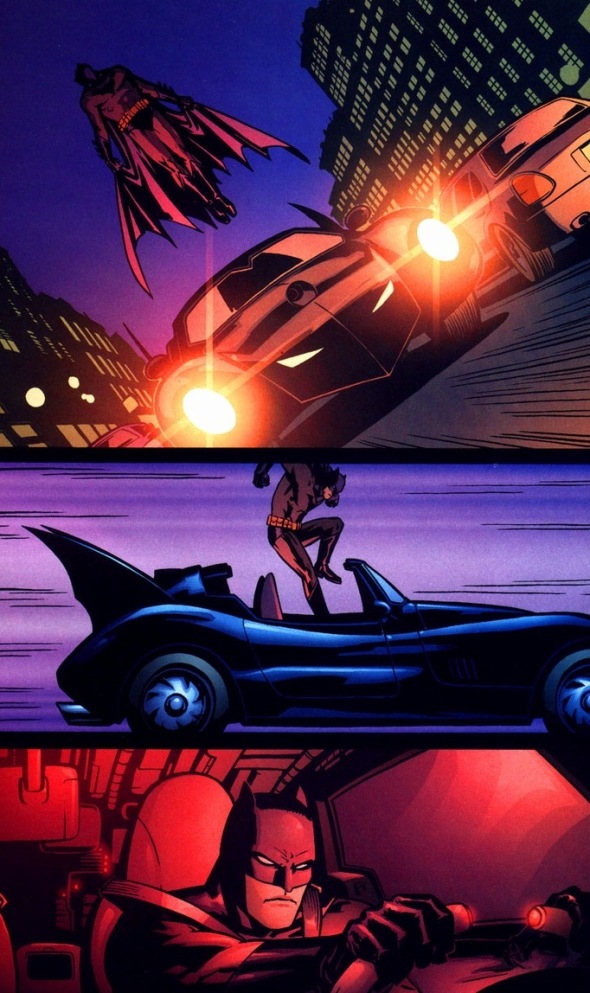 How many times do you think he practiced that in the Batcave?  Whole months must have gone by with Alfred cleaning up Batman pieces off the windshield.  Finally, Batman and Zsasz get cornered by the police, who — shockingly — aren’t terribly fond of Batman vigilante-ing up their city.

One of the main reasons I picked this arc for an article is for the next scene alone.  I firmly believe that McCarthy started his script with Batman’s final line and worked backwards.  I’m talking middle-of-the-night-wake-from-a-dead-sleep pun.

That’s the closest Batman’ll get to a joke.  Enjoy the moment.

4 Comments on “Batman and the Alfred gamble”