Did you enjoy Avengers vs. X-Men?  Irrelevant, because I can’t hear you.  I loved it, if just because I have a soft spot for superheroes punching other superheroes.  In summary, the Phoenix god-like force returned to Earth and impregnated/enveloped five X-Men, one of them being Emma Frost.  Now with practically unlimited power at her command, she sets off to “right” some wrongs.  We’ll get back to her later.  First up, the introduction of Avengers Academy #32-33, written by Christos Gage and drawn by Timothy Green II. 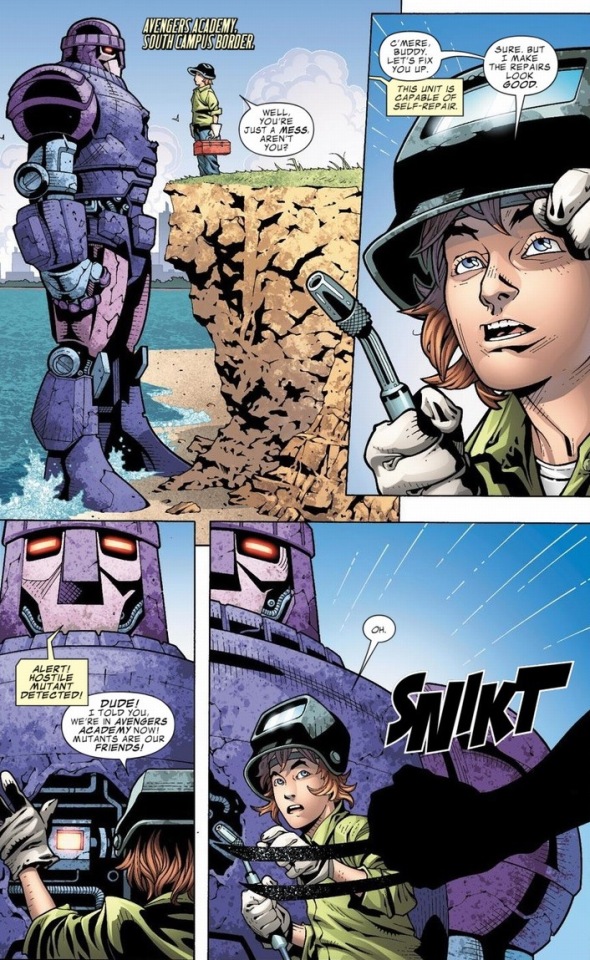 The requirement for Avengers Academy isn’t as stringent as some of the other super-schools.  Juston has zero powers and zero athleticism, but his best friend is a giant robot so that apparently fast tracks his admission.  Sentinels, the henchmen of the government, get programmed to hunt down and kill mutants using lasers and a thirty-foot height advantage.

Mutants tend to have a problem with sentinels.

Meet X-23, female mutant clone of Wolverine.  Two claws on each hand, one on each foot, and much less hairy.  Normally, the destruction of a sentinel doesn’t really shed any tears, but this one’s special.  BFF special. 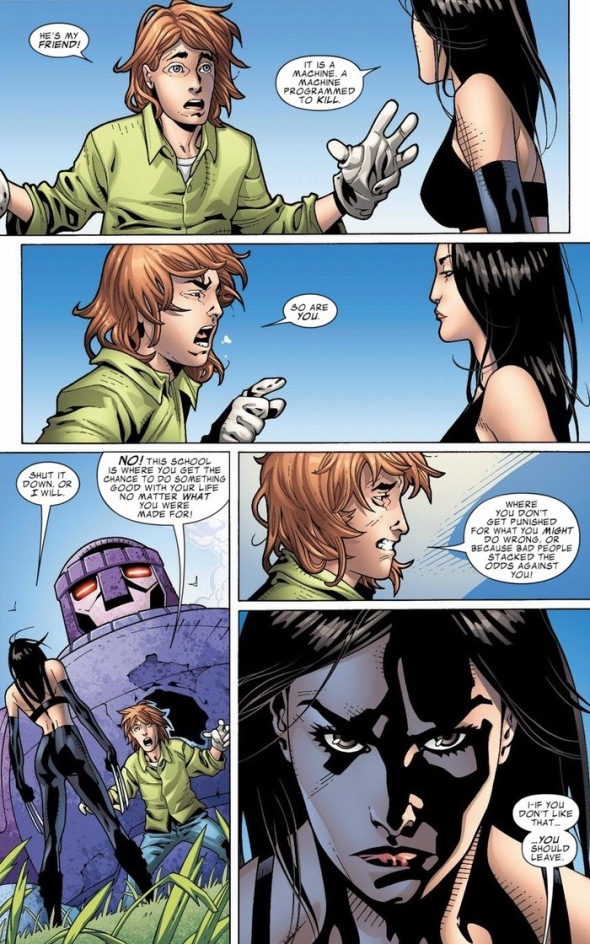 Now X-23 may be a relentless killer, but she also doesn’t really want to crush the dreams and shatter the love of a fellow teenager.  Unfortunately for Juston, there’s someone out there who has no problem crushing dreams and shattering love. 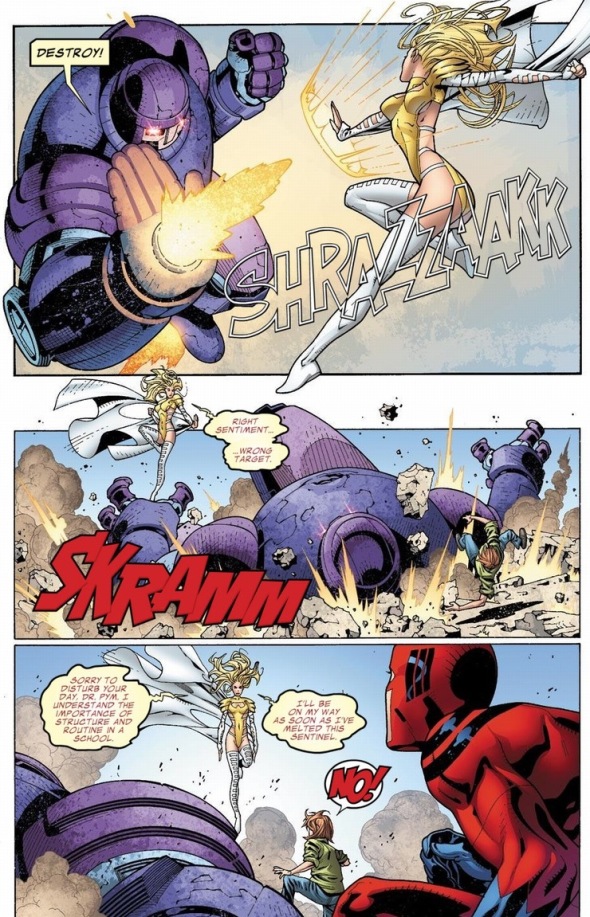 Let me make something crystal clear: the Avengers Academy does not stand a chance against Phoenix Emma Frost.  With all their powers, all their strategies, and the entire academy emptied out to join the battle, they do not stand a chance.  Robots feel differently. 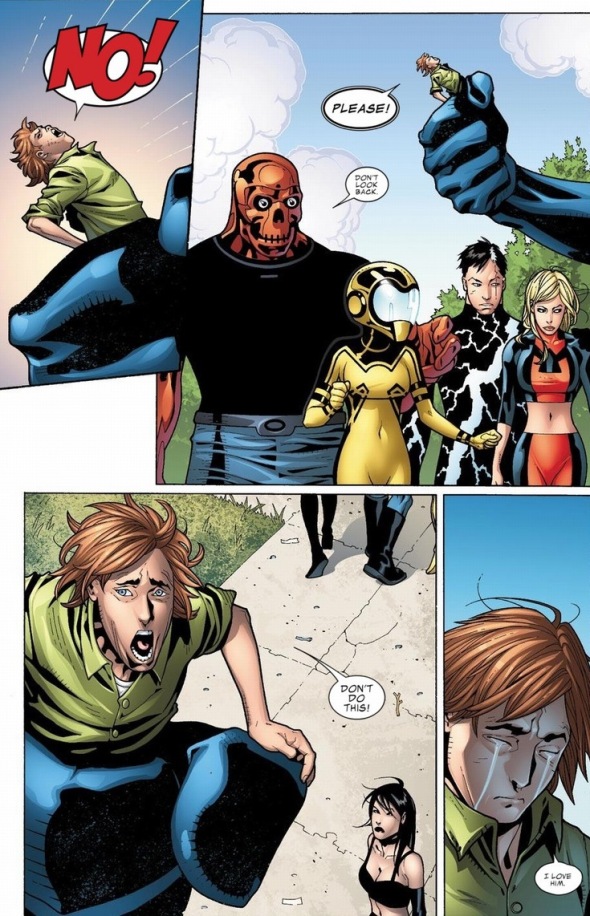 Hank Pym, the headmaster at the school and one of the top five smartest people on the planet, understands the situation completely.  His teenage students on the other hand, tend not to realize that a fight against a catastrophic god-like force won’t end well.  And in a serious moment of growth for our clawed friend, Emma Frost triggers X-23’s sensitive side.

You know how raising trained killers from birth go.  Let them love a puppy, then take it away and kill it. Standard psychopathic fare.  But for X-23?  No more.

Can’t you forgive Hank Pym now?  Unlike other celebrity domestic abusers, he’s spent 30 years redeeming and making up for his mistake.  And how could you not love him after the above page?

I’m skipping a bunch of the fight, but you’ve read enough to know how it goes.  As I show the next few pages un-commentated, please appreciate both the emotional outburst and cinematic feel of the next few pages.  Actually, go to YouTube and play the saddest song you know before continuing. 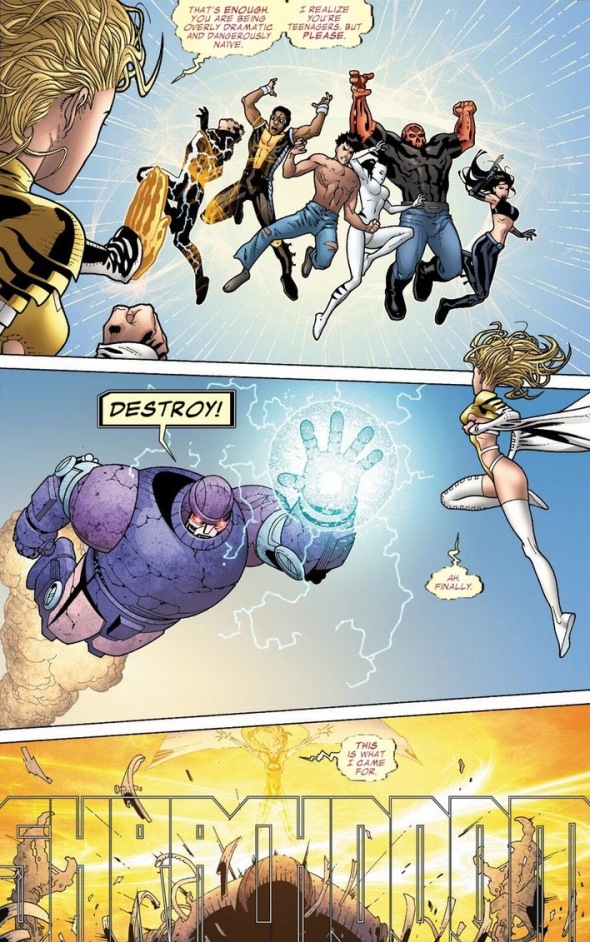 Wonder why the X-Men turned out to be the villains during this event?  Scenes like this, for one. Luckily, as you mop up your tear-soaked cheeks, this story has a happy ending.  Thank god, right?

Quicksilver also serves as faculty, and even Phoenix powers can’t detect his crazy speed.  While the arc ends on dreadful foreshadowing, a boy and his sentinel reunited isn’t a bad way to go out on.