If you read comics, it’s hard to get away from Wolverine.  In the late 2000s, he had two or three solo series, two or three team series, and that doesn’t even include all the X-Men stuff.  So either cashing on his popularity or hoping to cash in before it became overwhelming, Marvel gave his son Daken Akihiro (Dark Wolverine) and his clone Laura Kinney (X-23) their own series as well.  Luckily for us, both X-23 and Daken: Dark Wolverine were both really, really good.

Before we begin, let me explain for those who don’t know.  X-23 may be one of the most successful superhero teenagers to come out of comics in a long time.  She even received a full origin and back story in the miniseries X-23: Innocence Lost.  To sum up, she’s a clone of Wolverine trained from birth to be a heartless and tremendously effective killer.  Of course, that whole thing backfired and she escaped, now trying to do good and all that jazz.

And Daken?  He’s quite possibly Wolverine’s best supervillain in the past fifteen years..  Logan’s biological son from his deceased wife Itsu, Daken gets raised by the psychopath Romulus after tragedy and murder and you get it.  The guy turned out full-on sociopath and evil, premiering in the fabulous Wolverine: Origins series.  Go read it.

Enough words, let’s get on with our story.

Welcome to the fictional country/city of Madripoor.  Think of it as a wicked version of Singapore. Here, corruption and lawlessness run the city, making Madripoor an ideal destination for the more swarthy characters.

You know how team ups go.  First they fight, then they cooperate.  So, here’s some of the fight:

The arc makes use of super awesome double spread battle scenes.  Here’s the first one.  Click for a much larger size. 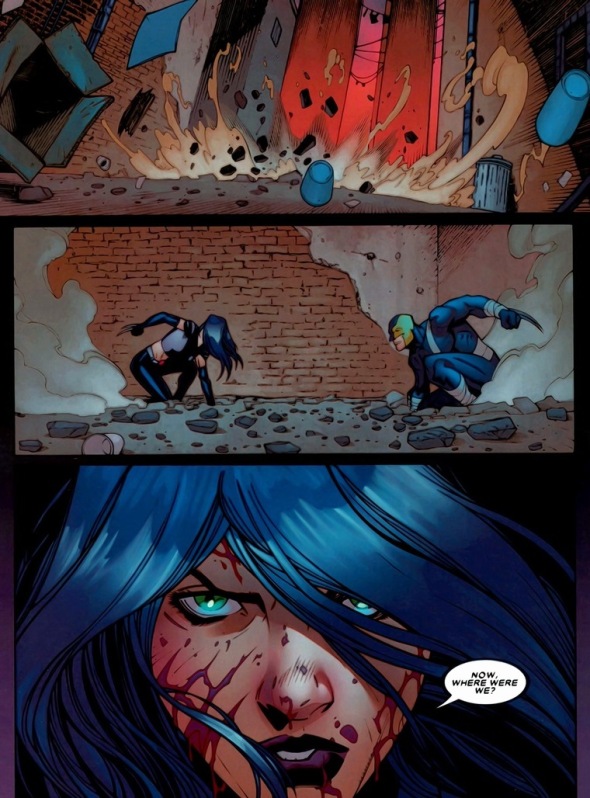 Their battle serves two purposes.  First, who didn’t want to see the two Wolverines brawl?  Also, Daken’s a baddie, so if they’re going to work together, they have to scrap first.  Second, the readers now know their skills and abilities are equal.  Or close to it.  No one’s going to be dragging along the other one.

X-23 and Gambit stop by Daken’s turf after hearing rumors about a Weapon X facility in Madripoor.  If you aren’t familiar with that hellhole, a group of evil scientists did all sorts of awful experiments on brainwashed and unsuspecting victims.  Wolverine received his adamantium claws/skeleton through Weapon X.  To prevent more victims like herself, X-23 visits the seediest city in the world.  Things go badly almost immediately.  Oh, notice the cool differences in art as the next issue begins. 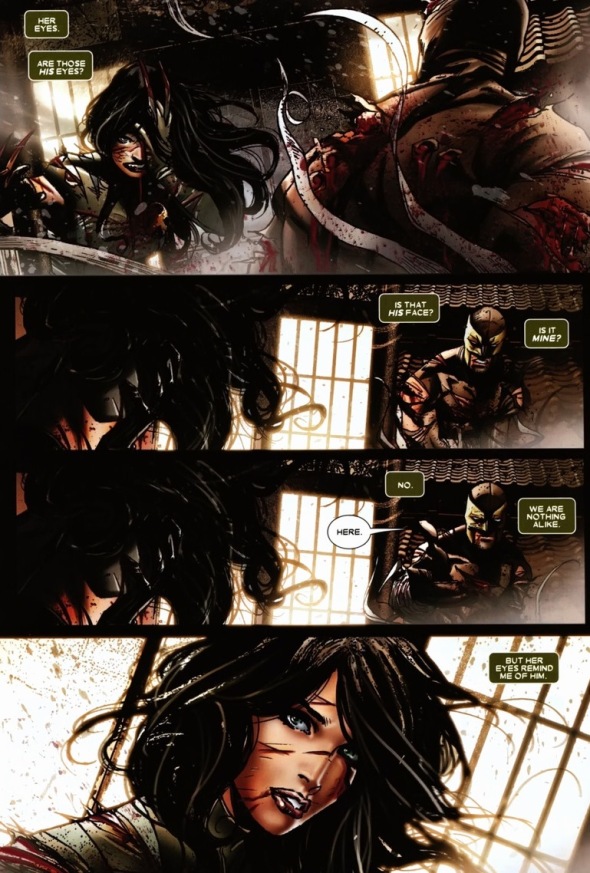 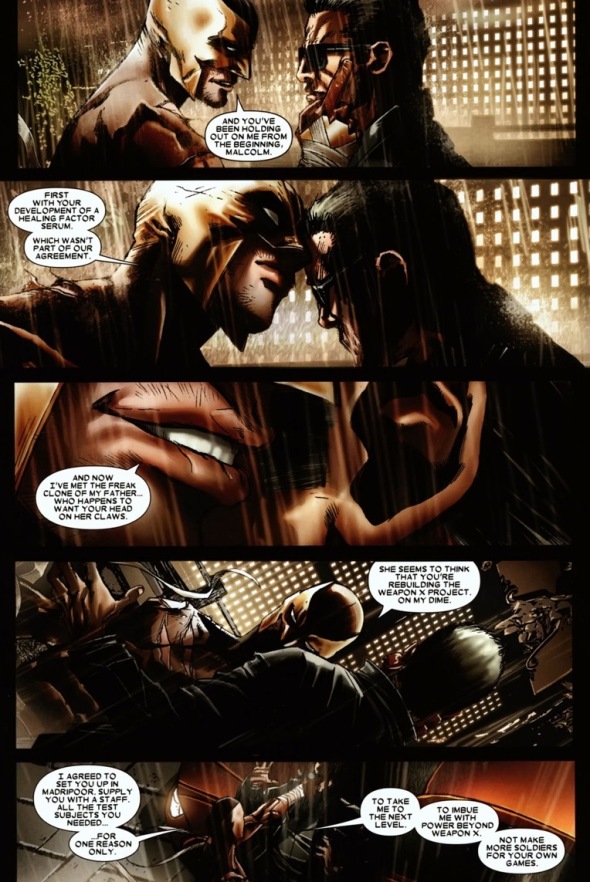 X-23’s also not a big fan of Malcolm Colcord making soldiers for his own games. 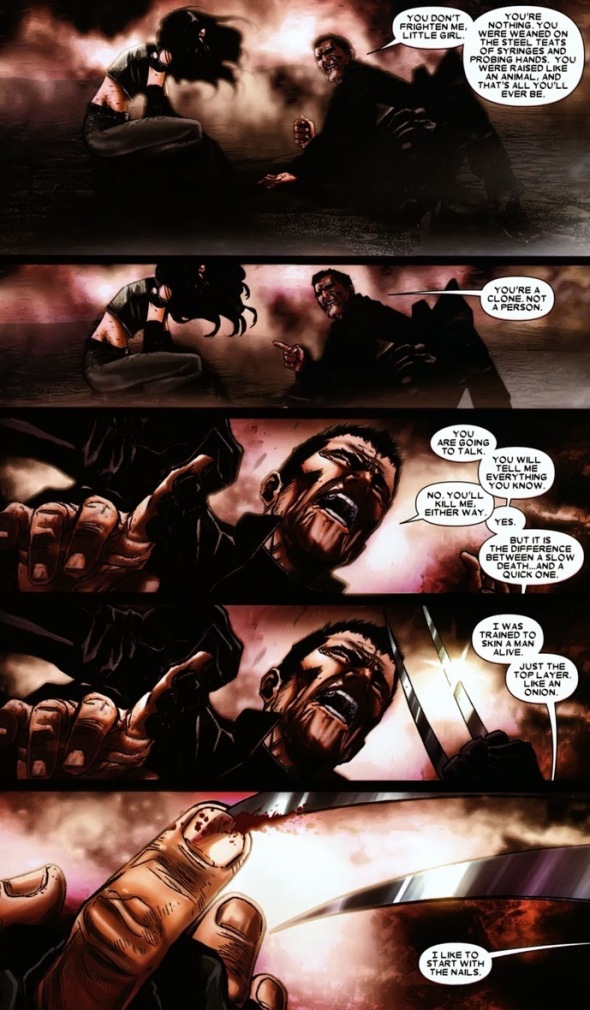 While this is going on, Daken and Gambit fight.  You have to cover all bases when you have series crossover.  Here’s the awesome double spread from that: 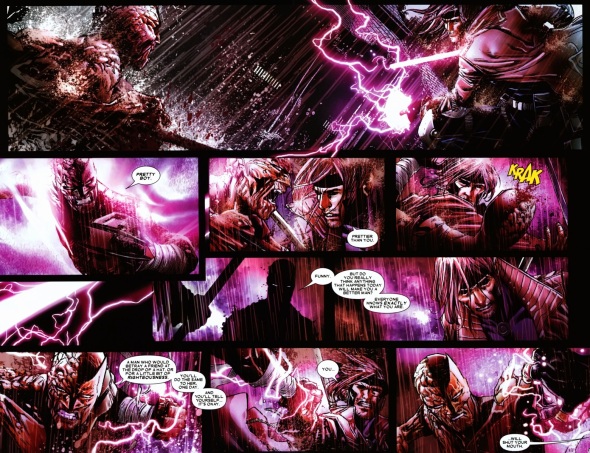 As the second half begins, X-23 finds herself in a tight spot.  Though probably better to bind her up than drug her.  Healing factor plus that tendency to flail her claws.

You see what Daken did?  Someone has ulterior motives that doesn’t include Laura getting ripped open with a chainsaw.

And our final double spread.  It’s just as awesome as the previous two. 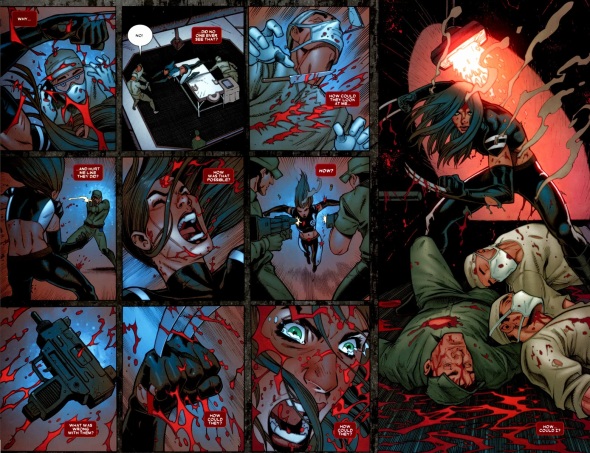 Don’t worry, Daken and X-23 totally claw and stab their way through the monster facility.  But since both of them remain badly damaged and with therapists not terribly pleased to see their patients soaked in blood, life questions have to figured out in between massacring scientists/guards/creatures. 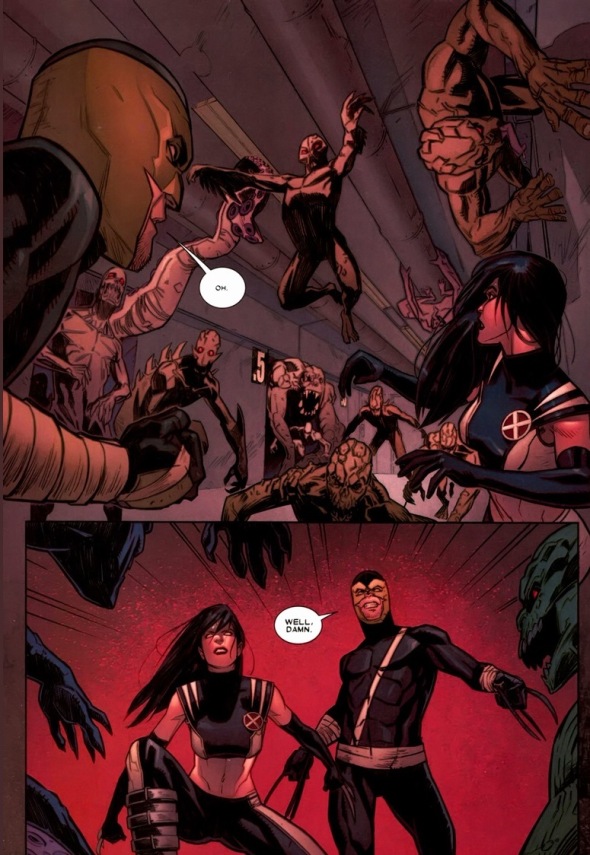 Eventually, the two meet up with Malcolm once more.  This time under very different circumstances.

I present one of the coolest pages I’ve ever seen in comics.  You’ll know which one I’m talking about: 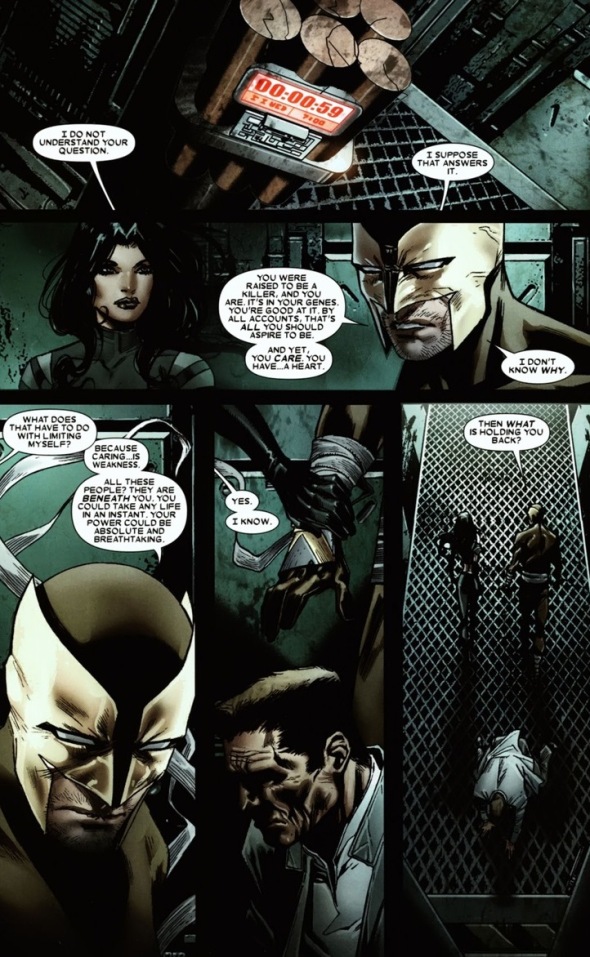 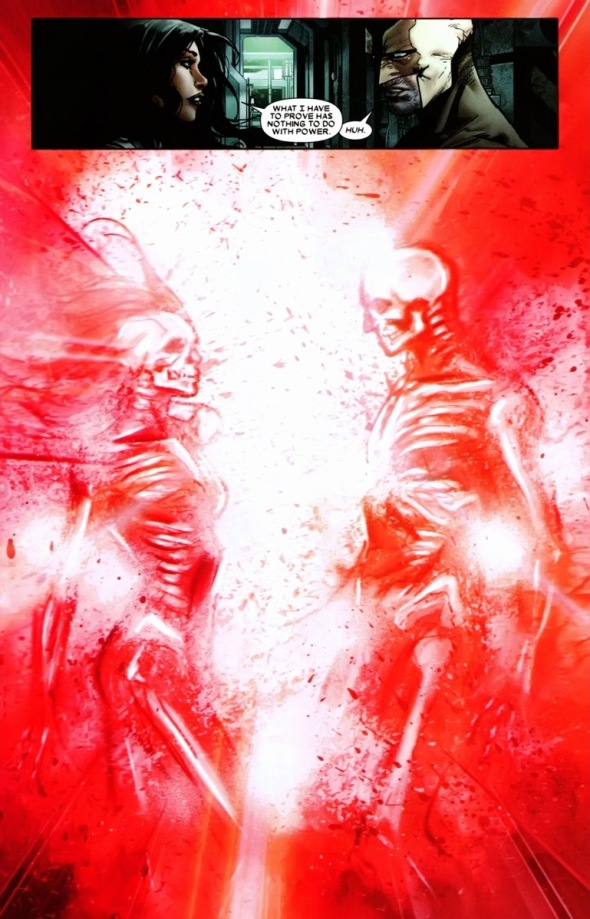