Spoiler alert: he doesn’t like him.  Ever since Lex Luthor’s introduction in 1940, his fascination and overbearing hate towards the Man of Steel — the truest, most powerful symbol of justice and all that other melodramatic stuff — have almost entirely defined Luthor’s character, motivations, and actions. Sure, he may take some time out to squash a business rival or ruin some poor sap’s career, but those are appetizers for Metropolis’ most famous psychopath.

Today, in a five different comics, let’s examine why he despises DC’s greatest superhero so deeply. It’s not just Superman’s gorgeous full head of hair either.

We’ll start way back in 1989 with Lex Luthor: An Unauthorized Biography, written by James D. Hudnall and drawn by Eduardo Barreto.  Near the end, Luthor kidnaps a poor reporter and explains his life obsession. 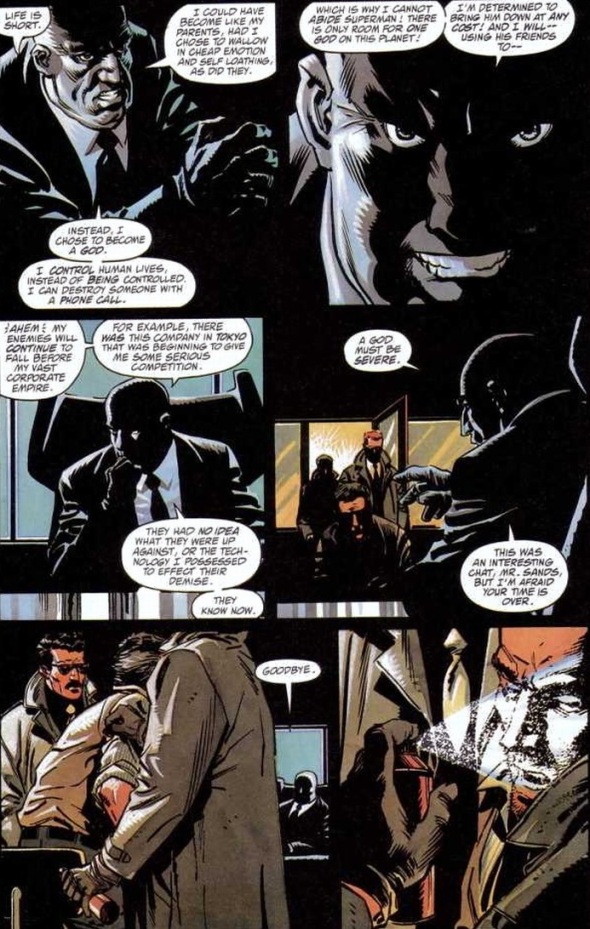 As you’ll see later, Luthor mainly explains his megalomania and jealousy through the shallow guise of protecting humanity, but Hudnall’s Luthor spares no excuses.  This alien showed up on his planet and because of these fancy Kryptonian powers, Superman stole Luthor’s spot at the top of the food chain. Sure, phone calls to dismantle opposing companies sounds nice, just not compared to being able to bench press the moon.

As we move towards the past decade or so, please check out the Lex Luthor: Man of Steel miniseries, written by Brian Azzarello and drawn by Lee Bermejo.  If you want a convincing reason why Luthor’s the most compelling supervillain in the DC universe, this is your answer.  Look, I love the Joker, but he lacks the complexity of Superman’s arch-nemesis.  Or maybe I’m just biased towards bald guys.

It’s not fear.  Luthor fears nothing.  I believe it’s frustration, with Luthor’s pessimism joining forces with his own self-actualized mortality.  Plus, check out how evil Superman looks from Luthor’s perspective. 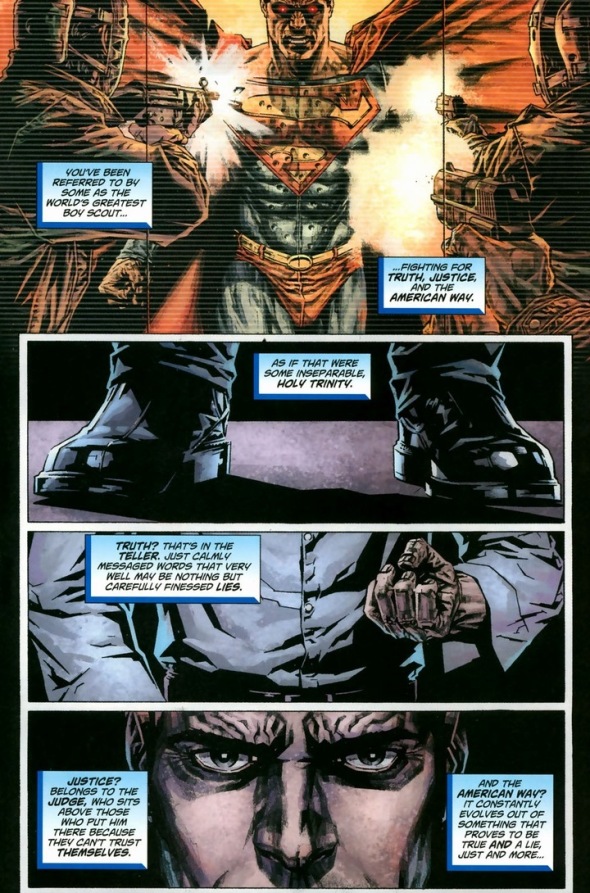 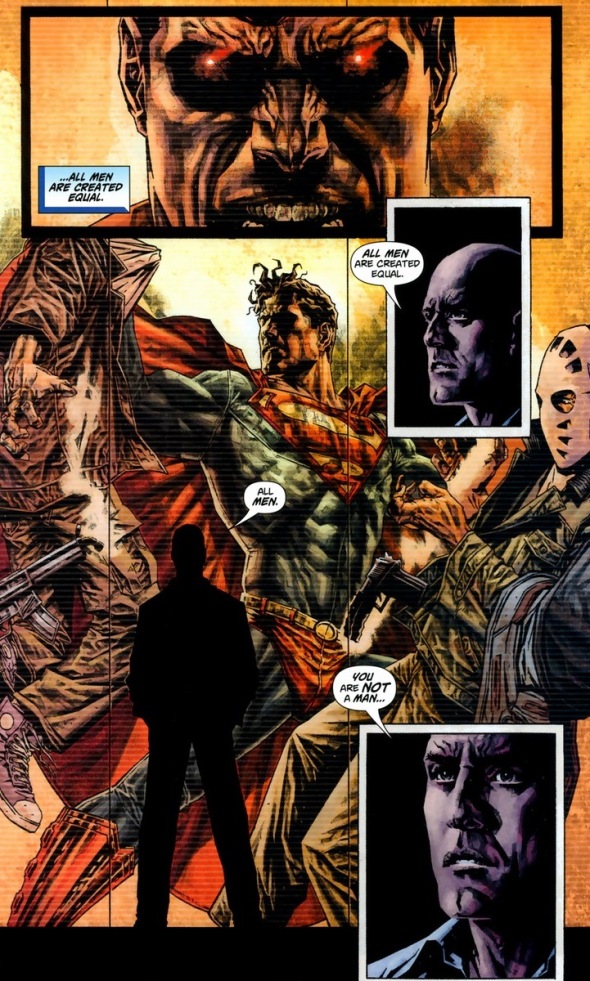 Even if Luthor just had the misguided Earth’s-for-Earthlings mentality, that would be suitable motivation for readers.  Heck, if we can accept Superman’s dog as a genuine superhero (and remember that Supergirl briefly dated her pet horse in the 1960s?), our standard for suspension of disbelief remains noticeably low.  But we can’t forget about Luthor’s own accomplishments.

Though Luthor’s own desire for power still outshines any dreams for humanity’s greatness.  The guy’s a supervillain for a reason, y’know.  Also, he used to be president of the United States.

In Superman/Batman #6, written by Jeph Loeb and drawn by Ed McGuinness, the title characters found some secrets or audio or whatever to Watergate the whole Luthor administration.  Turns out Luthor’s not too happy with his presidency being ruined by his hated rival. 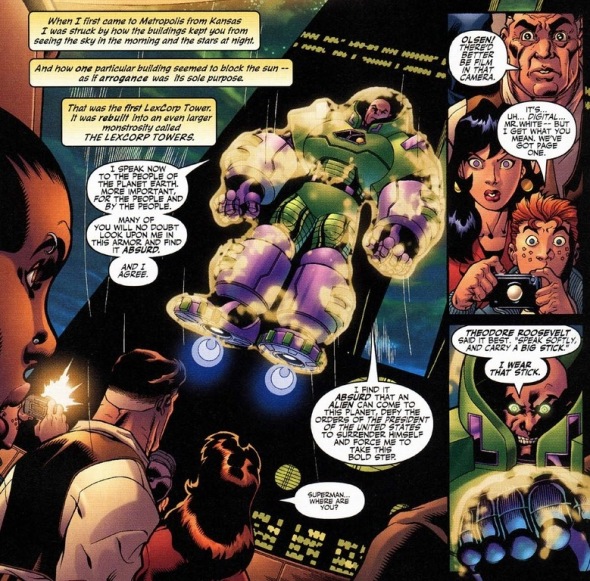 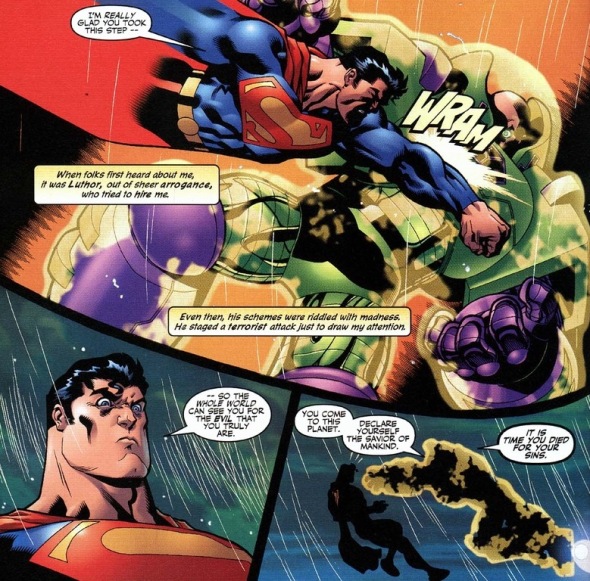 What I truly think, and what I believe Luthor has shown in the past few years is far more delusion than precaution.  Superman rocks.  Metropolis knows it, Luthor knows it, and the reader knows it.  I mean, it’s not a Lex Luthor movie coming out this summer, right?  The guy lies to himself about the danger Superman poses, because deep down, and I do mean really deep down, Superman’s the only being who can make Luthor feel truly insecure.  Seriously, he doesn’t bat an eye against Batman and the rest of the Justice League, but the Man of Steel has proven time and time again Luthor’s glaring uselessness.

Check out one page from Superman #653, written by Kurt Busiek & Geoff Johns and drawn by Pete Woods.  This should prove my point nicely.  Superman lost his powers for a year.  Sad stuff.  Once he finally gets back his strength, Luthor attacks the city in a giant crystal ship, like a normal weekday. 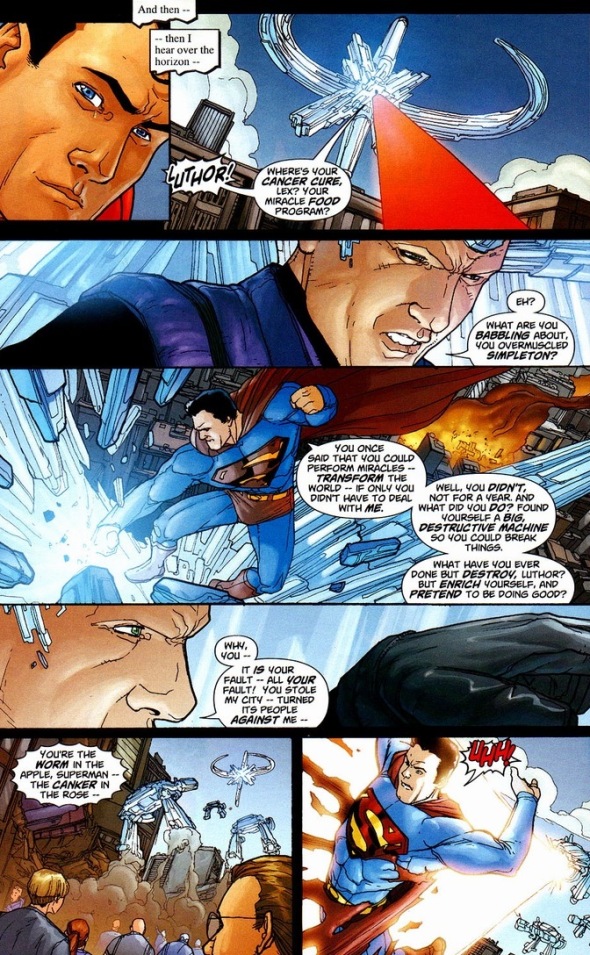 Luthor uses Superman as an excuse, but Luthor’s inability to admit his own weaknesses and emotional failings are the real reason the man can’t live up to his full potential.  To be fair, Superman’s tough, but he’s not a genius, giving his battles with Luthor a very jock-beats-on-nerd flair.

Let’s end today with the fabulous Action Comics #900, written by Paul Cornell and drawn by Pete Woods.  In the past ten issues, Luthor has become a god.  Long story.  Finally with all that power at his disposal, it’s time to make Superman suffer. 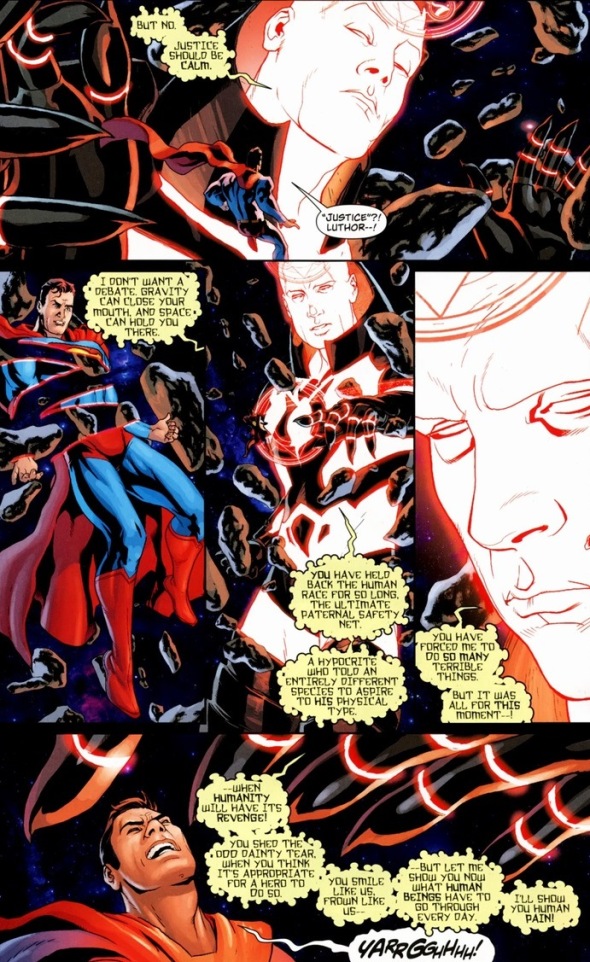 Y’see, Luthor doesn’t know Superman was raised on a Smallville farm by normal farm parents.  He’s about to learn that his arch-nemesis is more like him than Luthor thinks.  Why would this be catastrophic?  If Luthor sees Superman as a person like himself, he’s no longer able to hide behind that motivational curtain.  It’s a truth bomb aimed right at Luthor’s shriveled, bitter heart.  That and Luthor hates to be wrong. 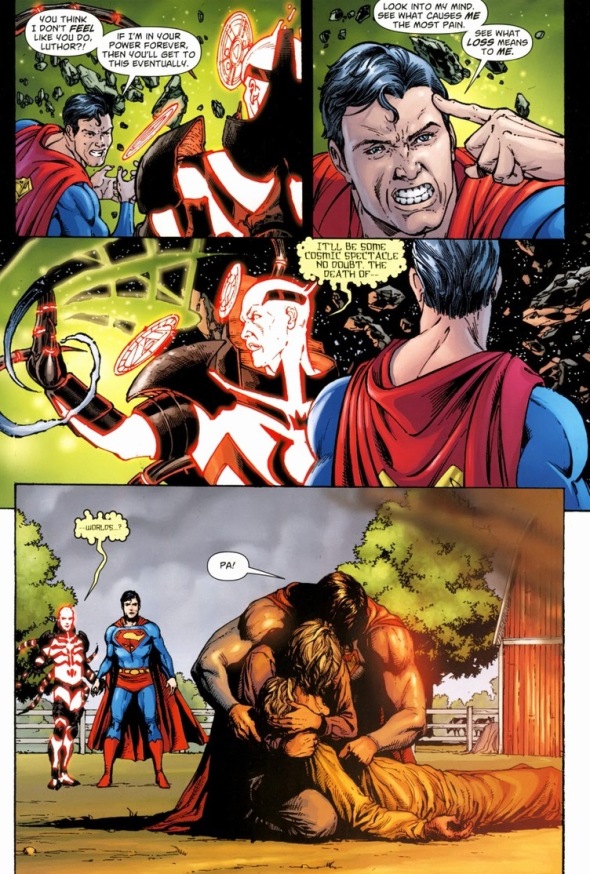 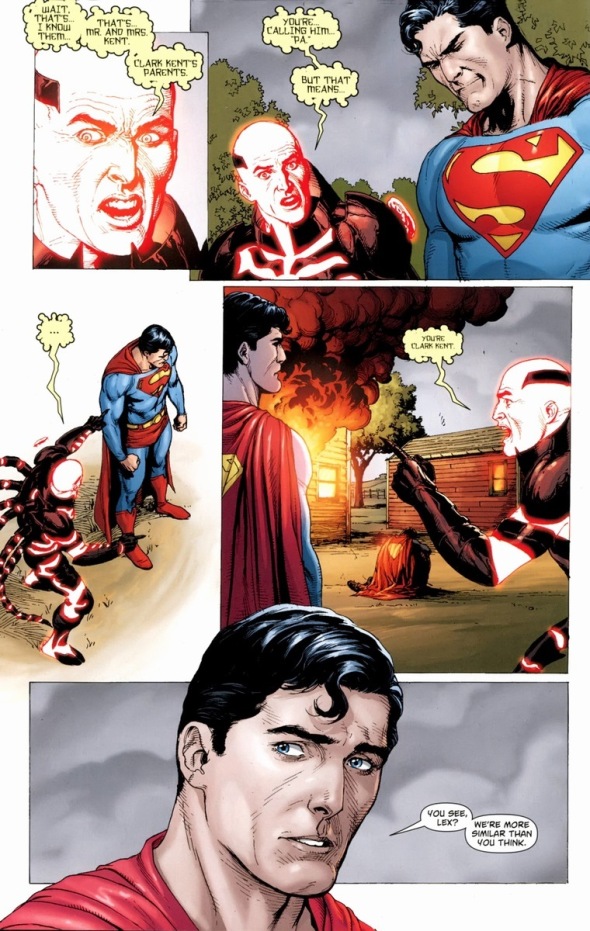 Also, y’know, this is the moment Luthor discovers Superman’s secret identity.  Unfortunately, Flashpoint occurs months after this, so that whole realization was erased and the status quo restored. Still, why won’t Luthor ever emerge victorious?  He’s punching a brick wall of truth, justice, and the American way.  Duh.

Spoiler alert: Superman wins.  Whenever you feel like criticizing Superman’s rogue gallery, feel free to mock Metallo or Parasite or Mister Mxyzptlk, but you leave Luthor out of it.  That man is the massively evil, power-hungry, emotional wreck of a bad guy we as readers deserve.  Plus, we should always admire a normal person who has the cajones to go head-to-head with Superman.  That guy can totally punch dudes into space.

4 Comments on “Lex Luthor on Superman”