I guess traversing the halls of Gotham City’s prison for the mentally insane becomes a rite of passage for Bat- and Super-sidekicks.  I assume if he or she can defeat a dozen of Gotham’s scariest in confined quarters, then a bank robbery and car chase won’t pose much of a threat.

Starting in 2006, the series Batman Confidential decided to have rotating creative teams that explored Batman’s earliest memories — the ones where Robin didn’t wear pants.  In Batman Confidential #20-21, written by Fabian Nicieza and drawn by Kevin Maguire, Batgirl (Barbara Gordon) is still relatively new to the whole crimefighting scene.  Unfortunately, a pursuit of the Riddler led her straight into Arkham Asylum.

As you can tell from her costume, she’s had a rough night already.  I’m actually picking up at the climax of this arc and unfortunately, this was back in the day when the Bat-family outfits consisted of less bulletproof material and more spandex.  Alfred must be a hell of a seamster.  Since Riddler’s known for his brains and not brawn, he figures that maybe the other inmates would like to handle the dirty work of beating up a teenage girl.

She brawls with some of the more minor villains, but you can buy the book for that.  Let’s start with the first of our heavy hitters: 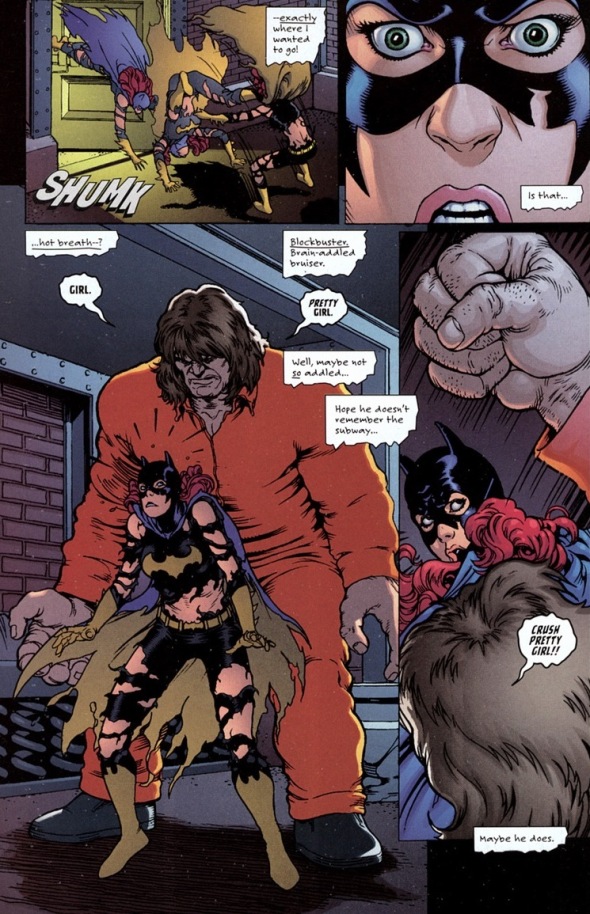 Blockbuster’s a popular supervillain name in the DC universe.  This dude above is the original, with steroids leaving him super strong but super dumb.  Let that be a lesson about drugs, kids.  His brother actually became the second Blockbuster and served as the main antagonist for the first 90-ish issues of Nightwing’s solo series. 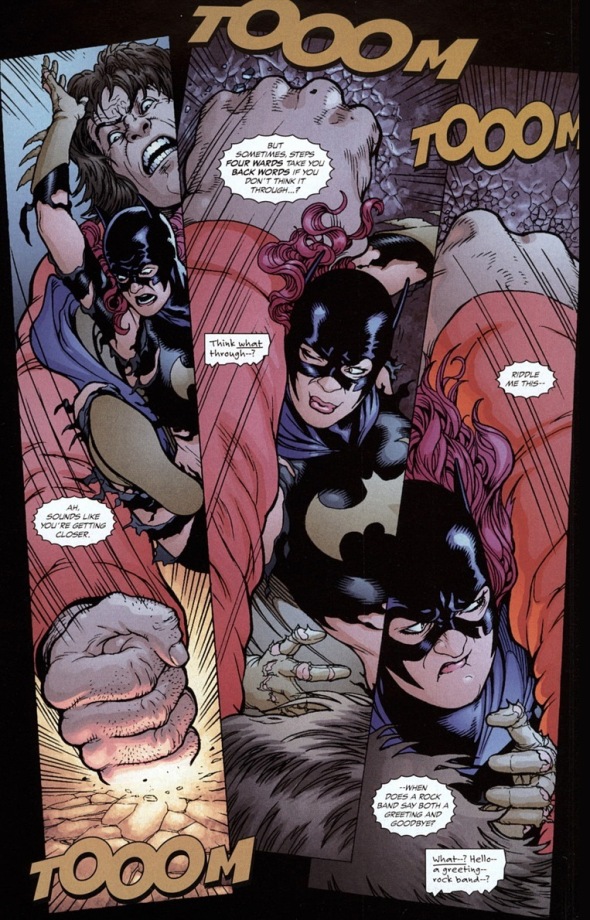 Batgirl has gained unparalleled popularity over the past forty years.  Mainly because she’s a strong female role model with a PhD and crazy martial arts, but fans’ interest comes from her intelligence. She’s not as strong as Batman and not as athletic as Robin.  So, much like Tim Drake, she has use tactics and strategy to defeat her foes instead of repeatedly bashing their skulls in.

And thank goodness for her intelligence too, because Joker’s next. 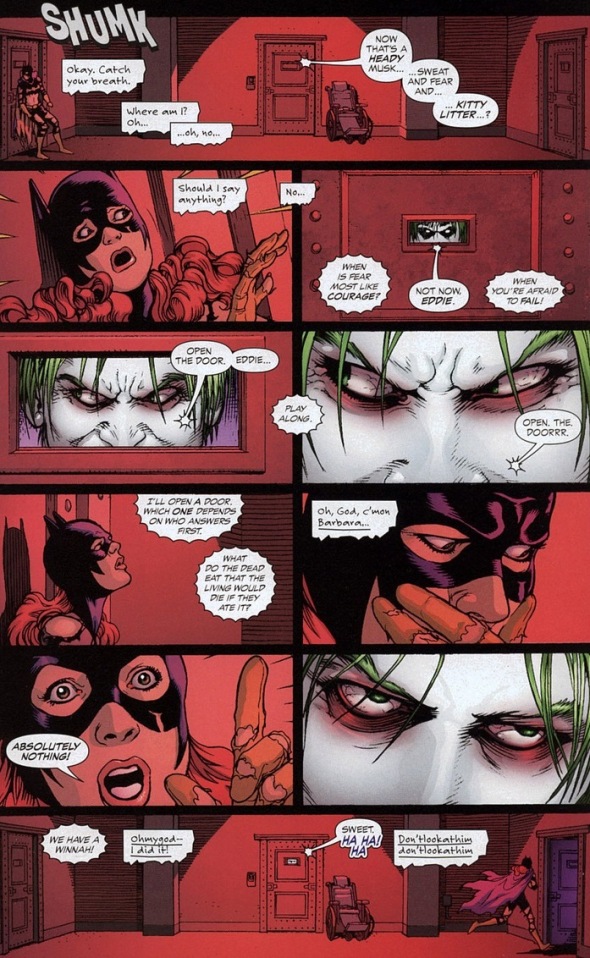 If you want a testament to just how much Joker scares people, even fellow supervillains hesitate to set him free.  Two Face gets next billing, and you shouldn’t underestimate the man’s skill.  When Batman and the Bat-family took that year off to travel or hike or whatever, Two-Face took Batman’s place.  And he totally protected the city, even without a cape and batplane.  Though, this is before all that. 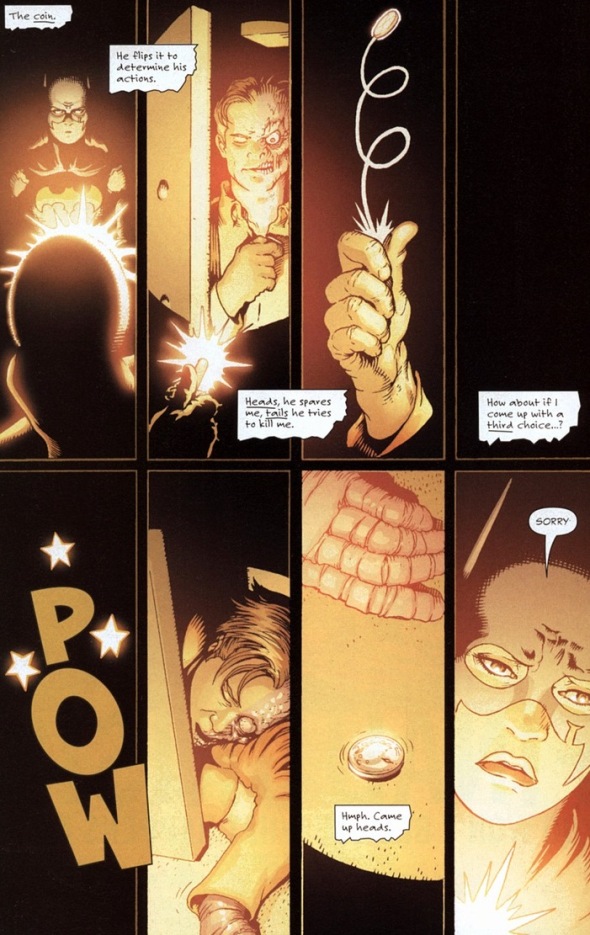 When readers complain about the relative “normalcy” of Batman’s rogue gallery, as in most don’t have superpowers, those that do rock hard.  Like Clayface.  That dude’s really hard to take down. 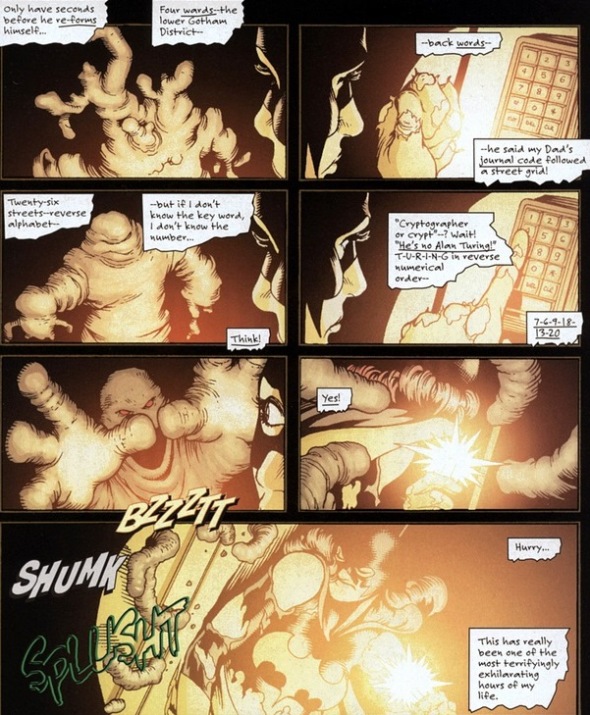 I’ll always have a soft spot for the superpowered Poison Ivy as well, but Batgirl never ends up at the arboretum or test tube — whatever they’re keeping her in.  As Batgirl begins to reach the main control room, she has one final challenge ahead of her.

To be fair, Scarecrow has the fighting skills of a college professor.  One doesn’t really need to study muay thai when all opponents one faces are frantically trying to claw imaginary bugs off of them. Speaking of academic fighting skills, the Riddler stands just behind the final door, ready to get his well-deserved beating. 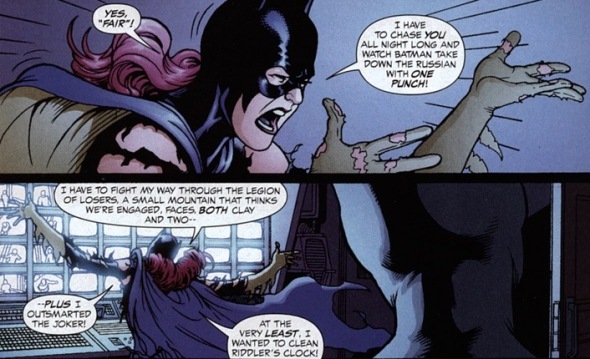 Catwoman teases in more ways than one.  By the way, the Riddler should always top the list of supervillains you would most want to punch.  He breathes in smug and breathes out ego, plus bowler hats should really only be worn by 1920s gangsters and 1950s private detectives.

With the Asylum back under superhero control, Batgirl can swing triumphantly back home for some much needed rest, because the rest of the day will no doubt be spent slaving over a sewing machine: 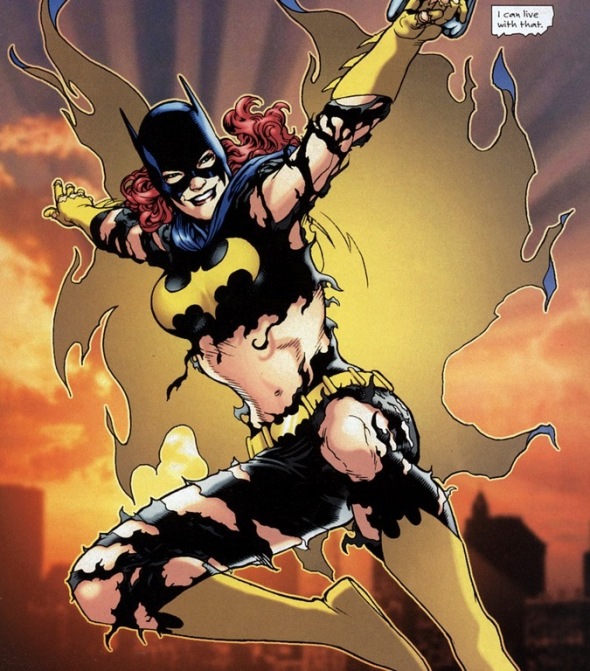