I’ve said over and over again that the best superheroes aren’t the toughest or strongest, but the smartest.  And not like Mr. Fantastic smart either — I’m talking the men and women who remain forever outmatched by their foes yet still emerge tactically victorious every time.  When we bring up Wildcat, trust me, they guy never holds the advantage.

If you haven’t read my first Wildcat article, the guy’s a non-powered elderly former boxer.  Who wears a cat outfit.  In JSA #9-10, written by David Goyer & Geoff Johns and drawn by Stephen Sadowski, Wildcat (real name Ted Grant) gets sidelined due to a broken arm sustained in a previous battle. While relaxing in the tub, the Injustice Society picks a genuinely horrendous moment to attack.

Can a sixty-ish year-old man with one broken arm take out the entire group in a head on fight?  Oh goodness no.  Luckily, Grant does get a single advantage — the Injustice Society attacked him at the JSA’s headquarters, where Wildcat knows all the tricks and secrets.  Still, this’ll take more than just giant exposed cajones. 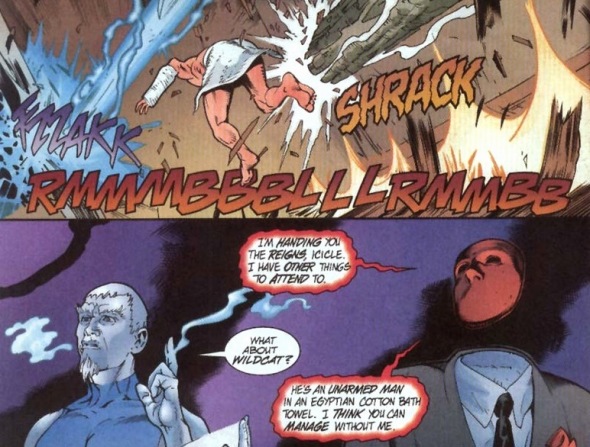 With Johnny Sorrow preoccupied, the battle now stands at six to one.  Even though Wildcat can’t really count stealth as a strong suit, he does have a wide field of surprises.  Like the motorized kind. 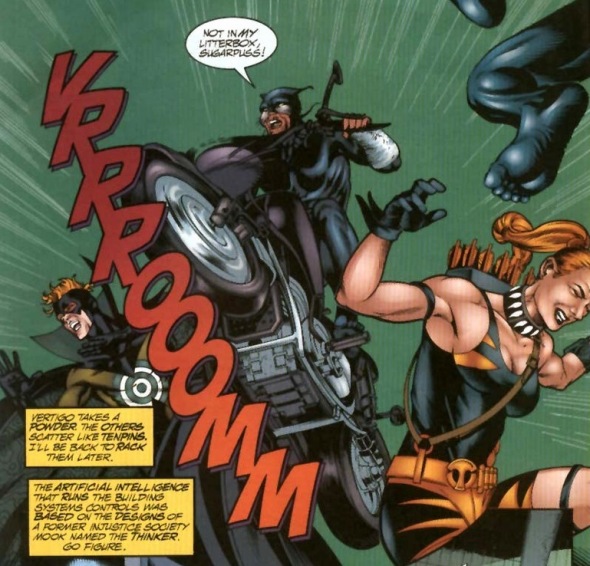 Count Vertigo goes down with a wheel in the face.  As Wildcat speeds off into the depths of the building, he decides to milk the bike’s usefulness.  I mean, you see how much use Ghost Rider gets with his?  And Wildcat has the added benefit that unlike Ghost Rider, his skull isn’t on fire.  More importantly, a motorcycle license may be the closest thing Grant has to a superpower.

Four left.  Wildcat says five, but Johnny Sorrow never actually fights — and we should be glad, because that man’s far more dangerous than I’ve let on.  His face kills people upon viewing.  Think of an uglier Medusa.  Anyway, Icicle’s easily dispatched for being dumb, and we move on to the real troublemakers. 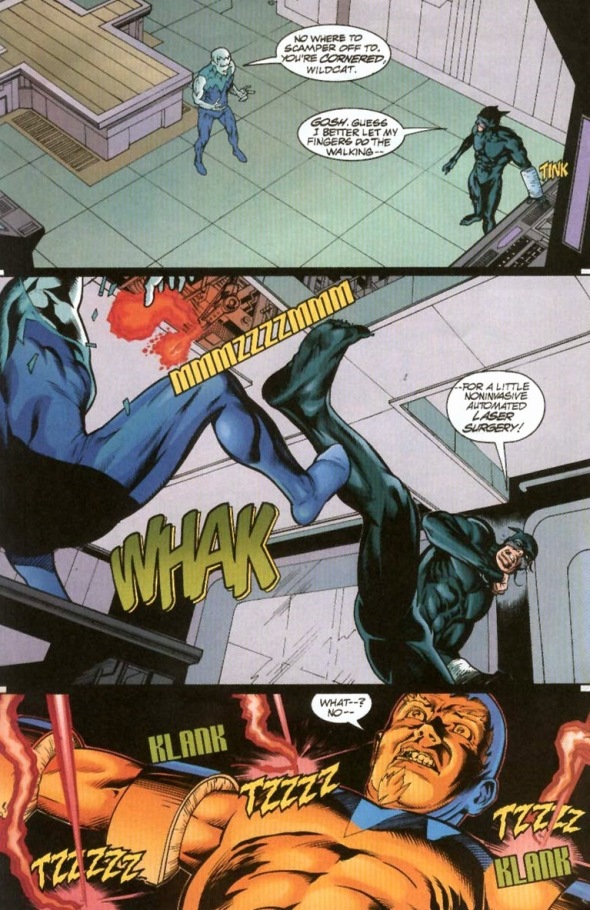 Immortality tends to be a flip of the coin in the DC universe.  Half the time, the immortal ends up strapping and handsome, like Black Adam or Vandal Savage.  The other half, the immortal has to live his life as a crazy wood monster.  Play the odds, y’know?

Nice to know that Blackbriar Thorn keeps his beard in tree form.  Unfortunately for him, the problem with having two thousand years of memories is that most of them are filled with thoughts of revenge and not getting caught up on how modern technology works: 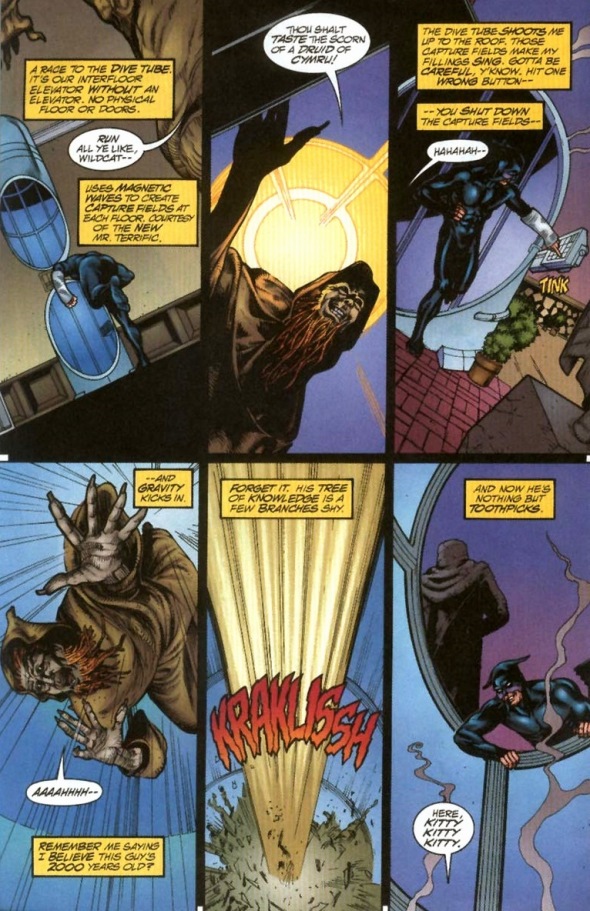 Look, I know why you want to read this article: you want the brawls and punches.  What Wildcat article would be complete without a few fistfights?  Grant’s like Rocky, if Rocky’s best friends had a magic space ring and superspeed.  Plus, we’re suckers for old, washed up dudes battling ferocious young fighters.

Honestly, Tigress totally could have taken out Wildcat, except for a common theme among supervillains: most register an IQ slightly above drooling.  Y’see, evil doesn’t require a high school diploma.

We see this all the time — the bad guy goaded into a no powers, no machines fight by appealing to ego and narcissism.  But pretend to be Killer Wasp for a moment.  The “superhero” mocking you happens to be a man three times your age with only one good arm.  And he challenged you to a boxing match, which greatly benefits from being not old and having use of all limbs.  Plus, you put Killer right in your name.

More importantly, by Killer Wasp accepting this offer, we get to see Wildcat take down his final opponent in the dramatic and heroic manner we as readers deserve. 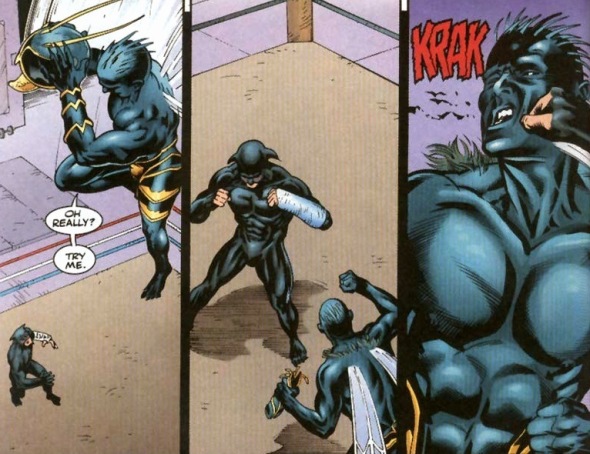 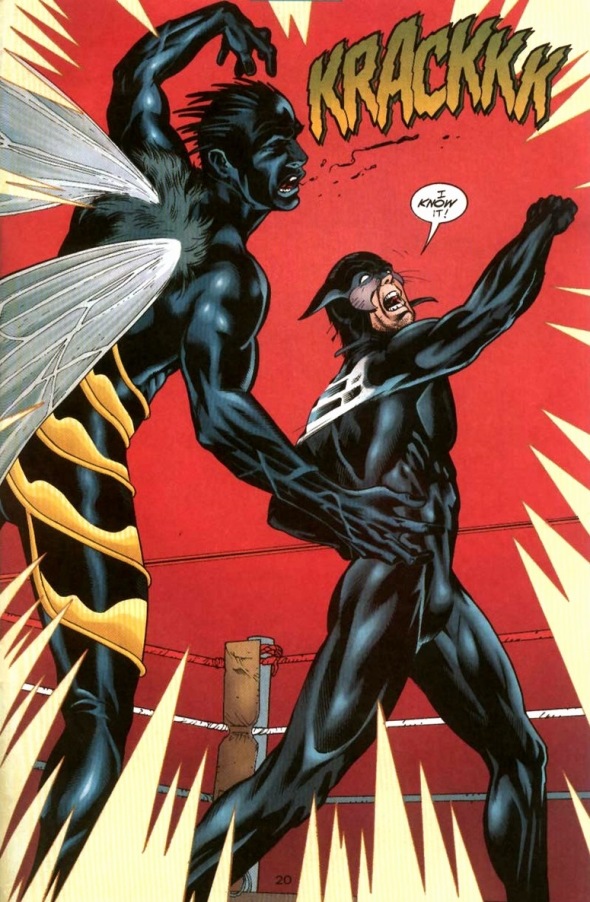 Darn tootin’, right?  We even end on a tried and true literary note — the parents arrive to a destroyed house scenario.  And by parents, I mean a gaggle of old men, teenagers, and Hawkgirl.

By the way, no better victory than using pieces of your enemy to pick out food chunks.  Finally, Grant can go back to his attempts at seducing Catwoman, who’s younger than his son.

3 Comments on “Wildcat vs. Injustice Society”