A better America with Uncle Sam

Some superheroes keep their symbolism close to the vest.  Their beliefs and ideals are tightly wrapped in contradictions and complex motivations.  Not so with this guy:

No hidden agendas here, and I have no problem when the agenda includes punching Nazis.  Uncle Sam first premiered in National Comics #1, created by Will Eisner in 1940, and you can’t have a more blatant propaganda tool than the friggin’ symbol of the country straddling Axis fighter jets.  But this same patriotism also brought on Captain America, who we can all agree is super awesome.  More importantly, like Captain America, the superhero Uncle Sam still graces the pages of DC comics to this day.  I’m serious.  He and his team of Freedom Fighters have fought all sorts of minor supervillains for decades: 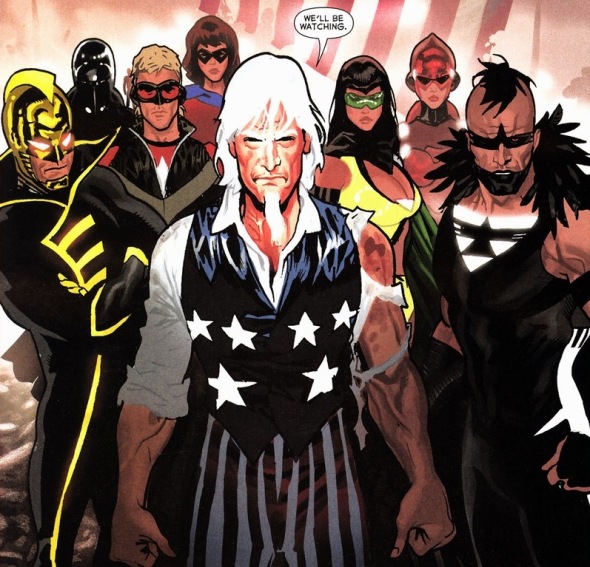 If your curiosity gets the better of you, Uncle Sam didn’t receive his powers (super strength, size changing, slight telepathy) from anything gruesome like a radioactive spill or saving orphans from a goo bomb.  Nope, Uncle Sam’s literally the tangible form of American spirit:

His usefulness in the DC universe, while relegated to a mini-series side character nowadays, still allows him to interact with DC’s mightiest and most popular.  Which means Superman, Batman, and the others all know of Uncle Sam and just don’t talk about him.  In Infinite Crisis #1, written by Geoff Johns and drawn by Phil Jimenez, he even had his butt kicked by Black Adam: 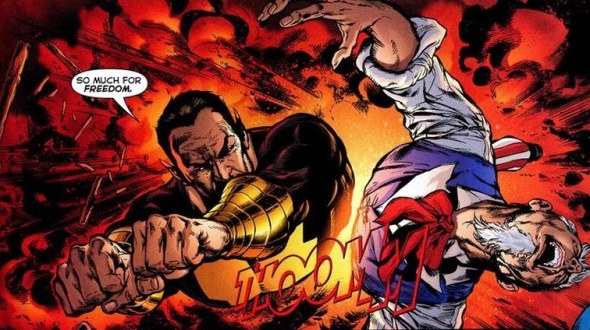 Beatings by major supervillains aside, Uncle Sam totally rocks and I’m here to prove it.  The symbol of America punches hard, of course.  In the first fight, Uncle Sam and his Freedom Fighters battle some mystical scary Native American monsters — and they don’t do so hot. 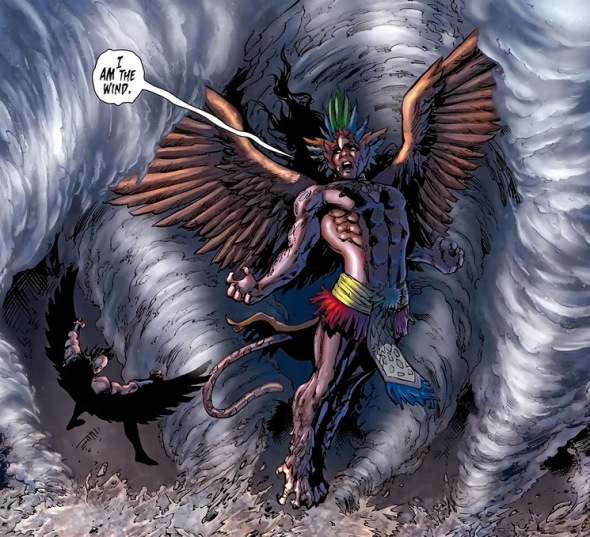 We’ve read enough comics to know that at the lowest point in our hero’s fight, a burst of adrenaline pours forth.  Second wind and moral lecture and whatnot.  Clichéd?  Definitely, but I never want writers to stop. 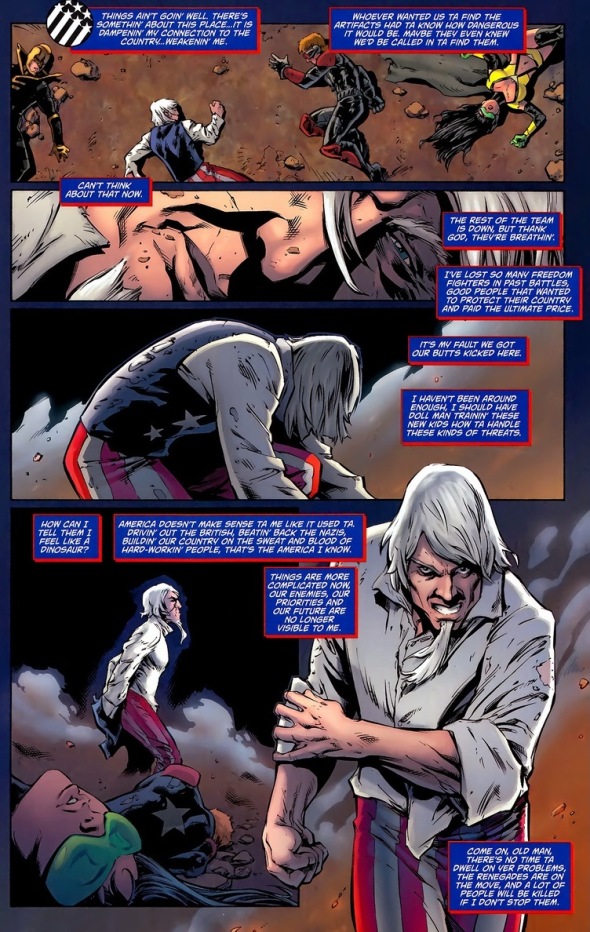 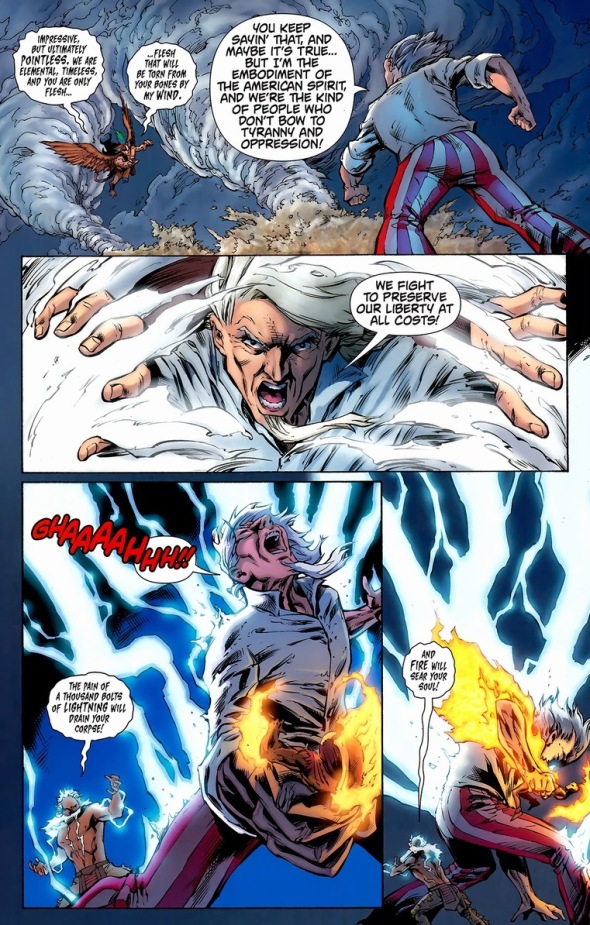 A little fire can’t harm the spirit of America.  Sure, Uncle Sam’s flesh and bones, but he carries with the hopes and dreams of three hundred million citizens.  I mean, he basically just recited the Declaration of Independence.  An eagle’s about to perch on his shoulder as fireworks go off in the background. 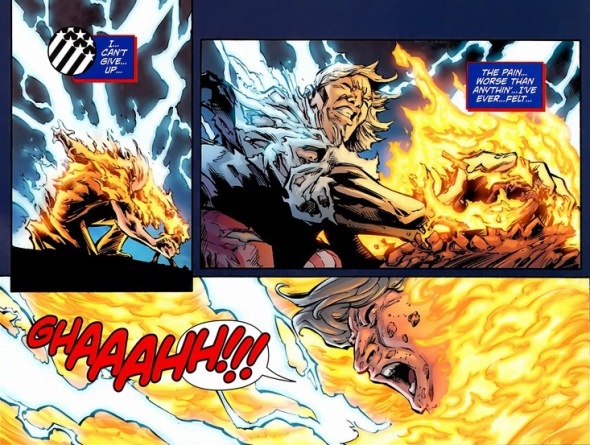 Or not.  Well, symbolism goes both ways I guess.  And just because the American dream’s charred to a crispy skeleton, that doesn’t mean all hope fades.  After all, we can brush off the failure dirt and try again — just like Uncle Sam’s corpse. 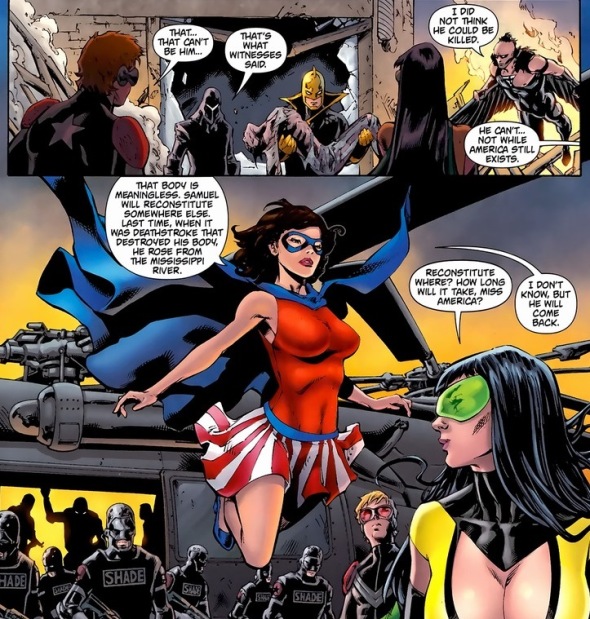 And oh, does he come back.  When a patriot’s blood spills in the name of freedom, Uncle Sam will be there to rise again, complete with top hat, star-spangled vest, and candy-striped pants.  Four issues later when a supervillain called the Jester seeks to take the place as America’s symbol, he figures killing Uncle Sam’s old team would probably be a good place to start.  Bad idea.

Thus begins a simultaneous fistfight and discussion on American ideals.  Uncle Sam’s opinion’ll be stronger (though I’m very biased) if just because comic book readers tend to be more optimistic about the future.  That probably comes from decades of reading stories where the good guys win every single time. 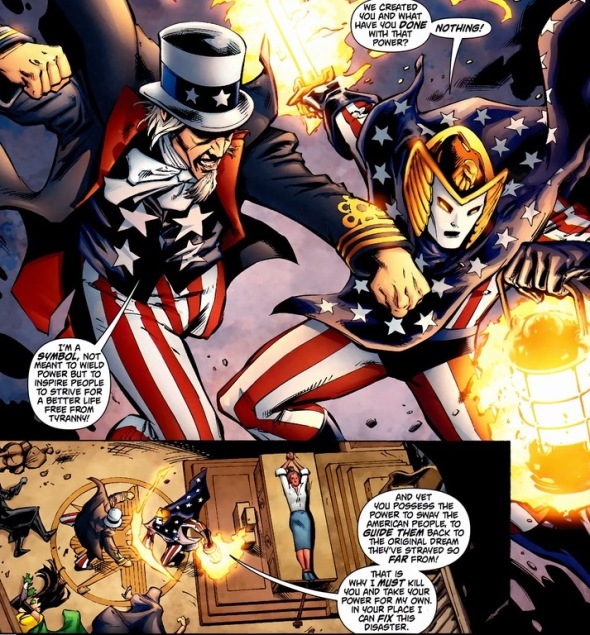 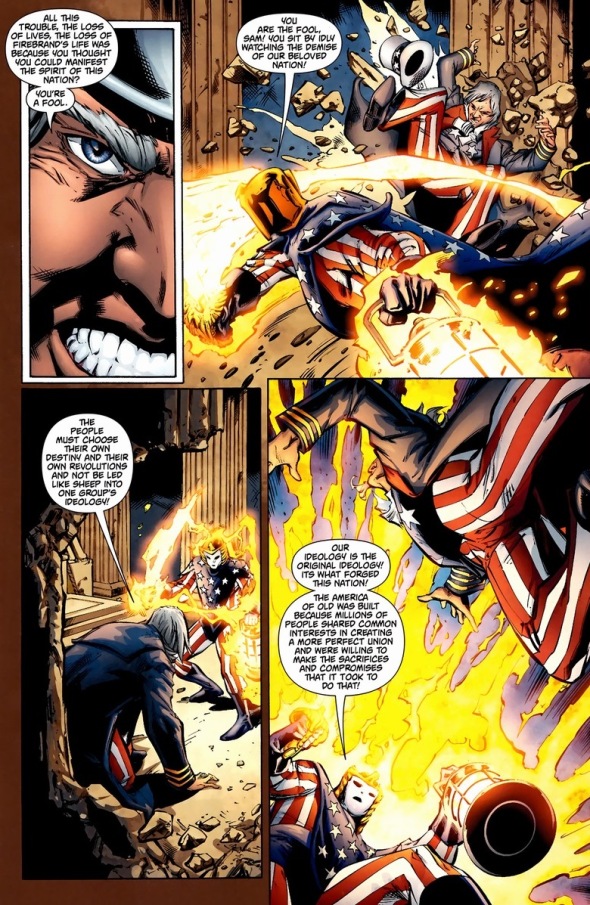 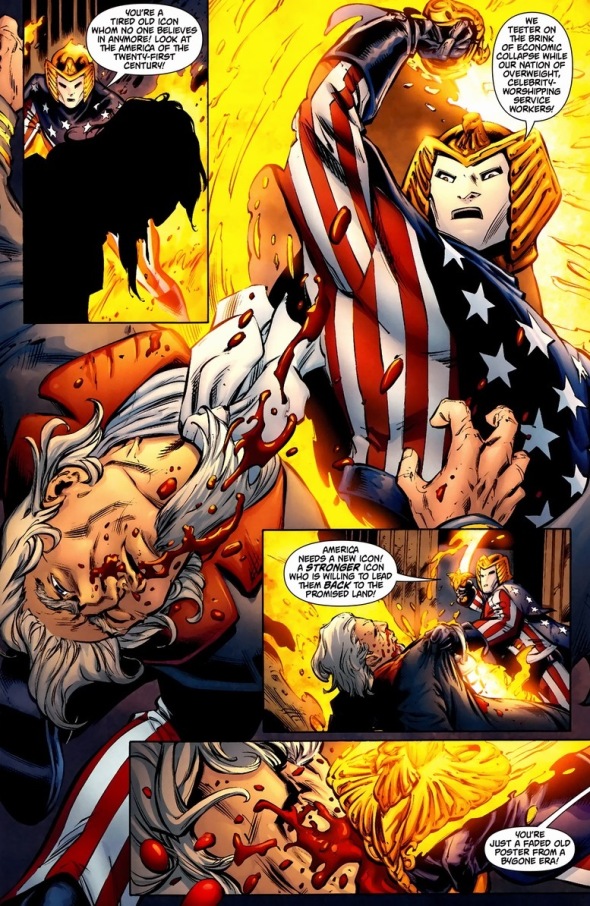 That’s right, Uncle Sam.  Hurt him with both actions and words.  Physically and emotionally.  Plus, I’m not alone when I believe that the symbol of America should have a goatee. 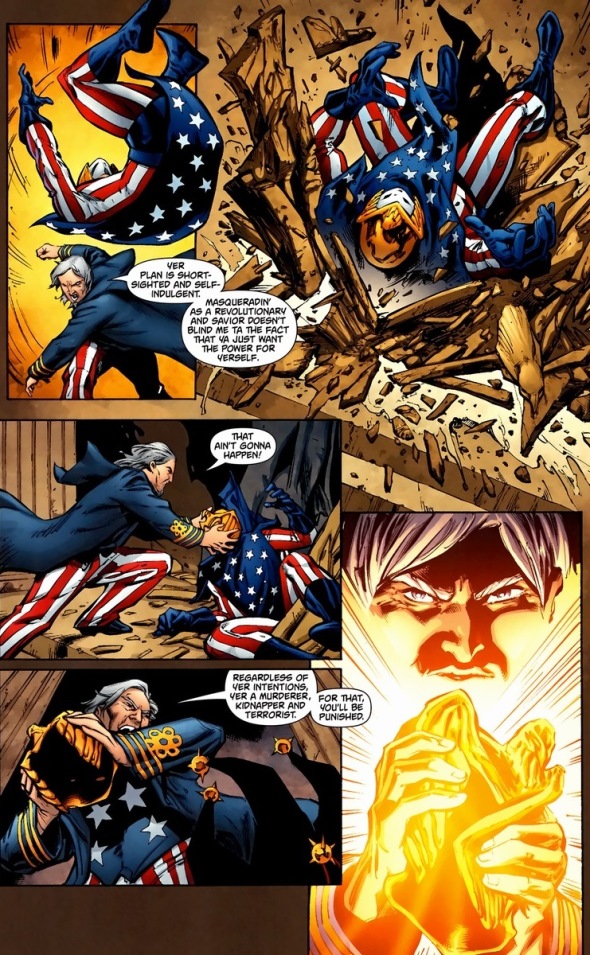 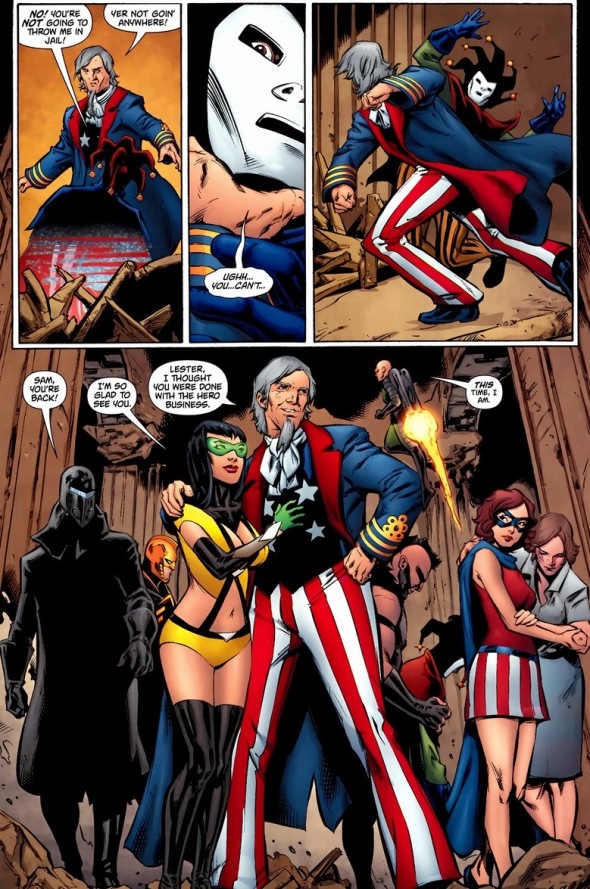 No better way to end this then to have Uncle Sam’s arms around a bosomy woman while standing over the unconscious body of your enemy.  That’s the American way.

One Comment on “A better America with Uncle Sam”