Our favorite green rage monster brings out the most primitive reasons we love superheroes: every time he shows up, all heroes and villains instantly soak their pants.  And what’s not to love about the Hulk? Infinitely strong, wildly unpredictable, and nine feet tall make for a compelling character right from the get go.  Add in the fugitive status, the brilliant scientist trapped within his dumb brute alter ego, and a heaping mound of self-loathing — it’s not hard to understand why the Hulk’s been so popular for over fifty years.

But I want to talk about the Red Hulk today.  Premiering in 2008, he spent the first twenty-two issues of volume two of Hulk as a complete mystery.  It took two years, but finally General Thaddeus “Thunderbolt” Ross emerged from behind the monster mask.  You know Thunderbolt Ross, right? Hulk’s arch-nemesis?  Father to Bruce Banner’s love interest Betty Ross?  Well, now he’s a Hulk.  A red one.

We’re going to take a look at a few of Ross’ fights today and Friday.  Let’s enjoy scenes from Hulk #5 and #24, written by Jeph Loeb and drawn by Ed McGuinness.  First up, Thor.

I’ll admit it — Thor gets his butt kicked horrifically.  Truthfully, I don’t mind; I like the fight.  For goodness sake, I worship the ground Spider-Man walks on and Peter Parker gets his butt handed to him like twice an issue.

If anyone could rival a Hulk’s strength, it’s Thor.  Y’know, except this time. 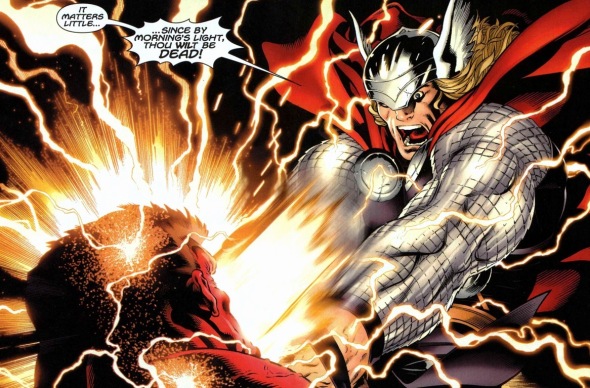 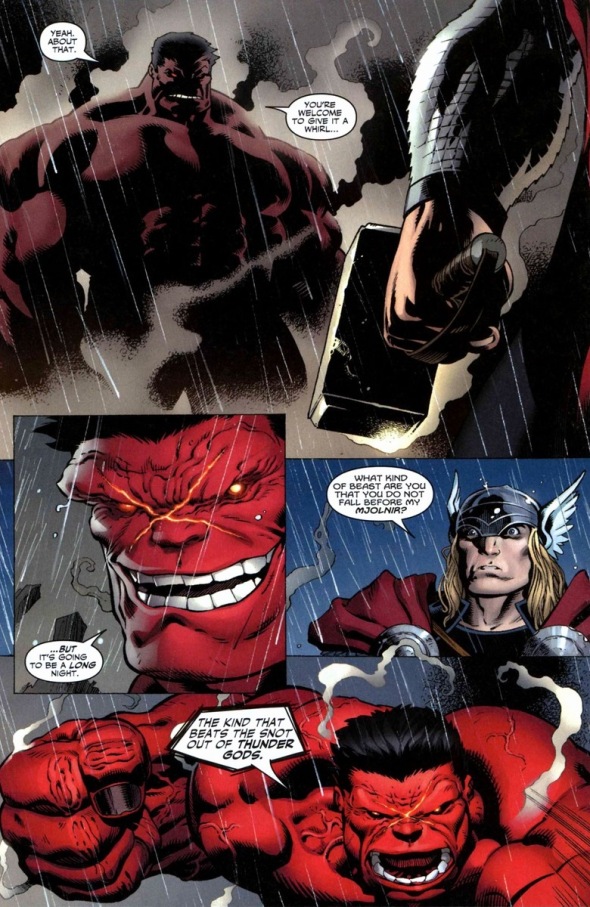 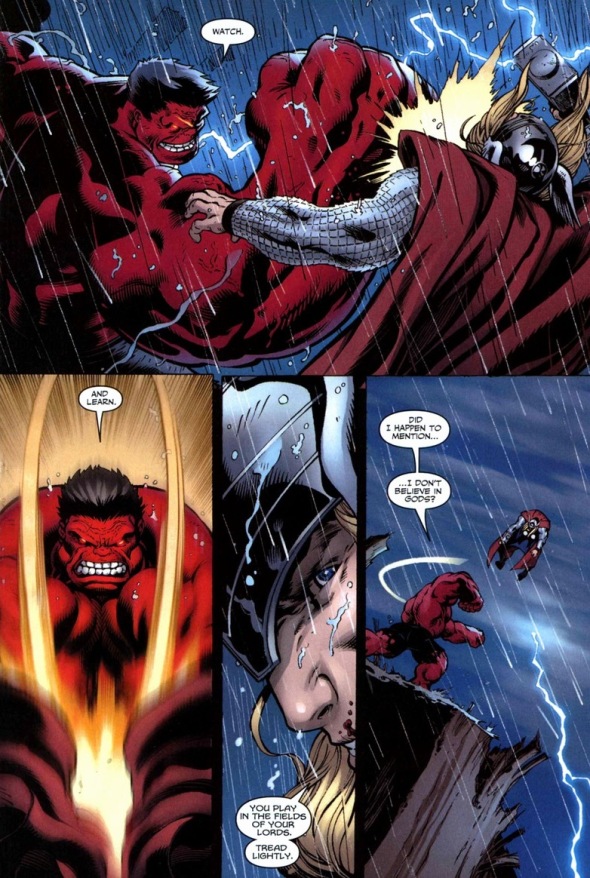 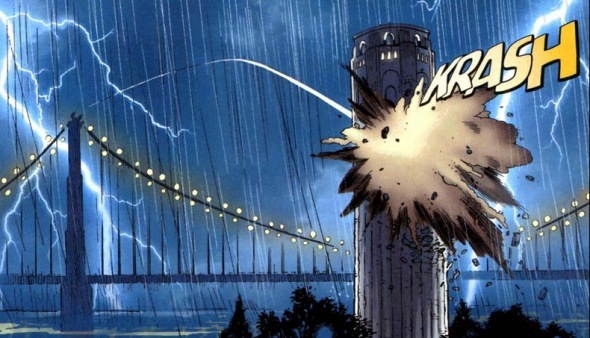 Have you heard of the fictional construction company Damage Control?  In the Marvel universe, they employ superheroes to clean up after battles between the good and bad guys.  I’m just saying the company’s down payment for that new jacuzzi gets placed the second a Hulk shows up in the city.

Now come some weird physics.  I don’t know enough science to verify Red Hulk’s claim and honestly, I don’t really care.  If we accept unconditionally that these characters reside in a world where gods walk the streets and toxic goo grants super powers, then what right do we have to question physics of all things? 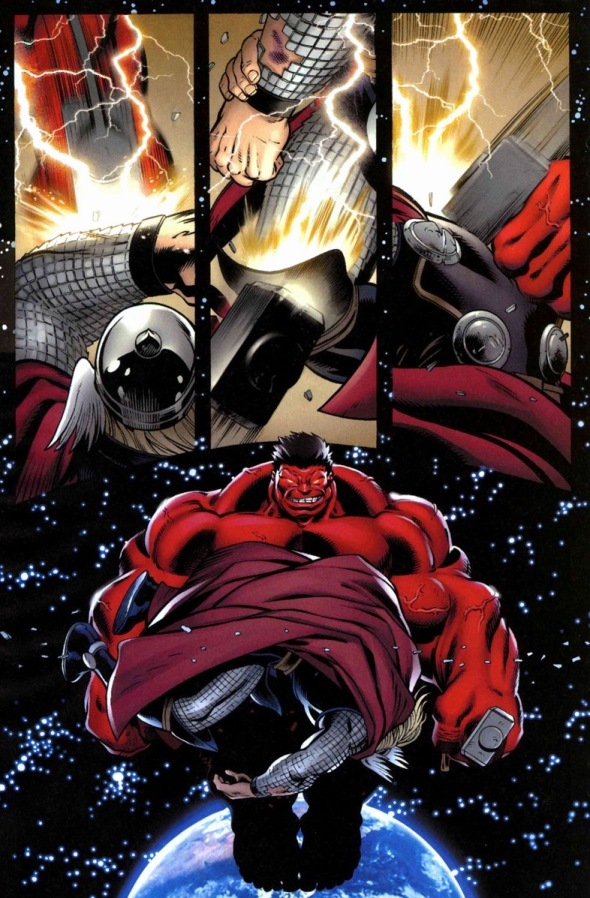 Victory to Red Hulk.  Ross combines all the strength and abilities of Banner’s Hulk with Ross’ own vast combat and military experience.  More importantly, he doesn’t have all the angst of living his life on the run for the past two decades that his green counterpart has.  Still, spending two decades chasing his green counterpoint has definitely built up some rage issues.  No better therapy in the superhero world than bashing the other into paste.

Double spread graces our opening.  I like the color-coded inner thoughts of the two rivals. 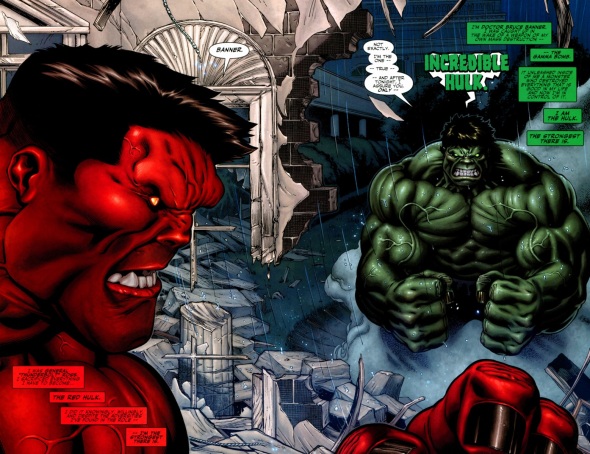 Notice the fire coming from Red Hulk?  Along with all the other Hulk stuff, the angrier he gets, the hotter he gets — and he’s currently quite angry. 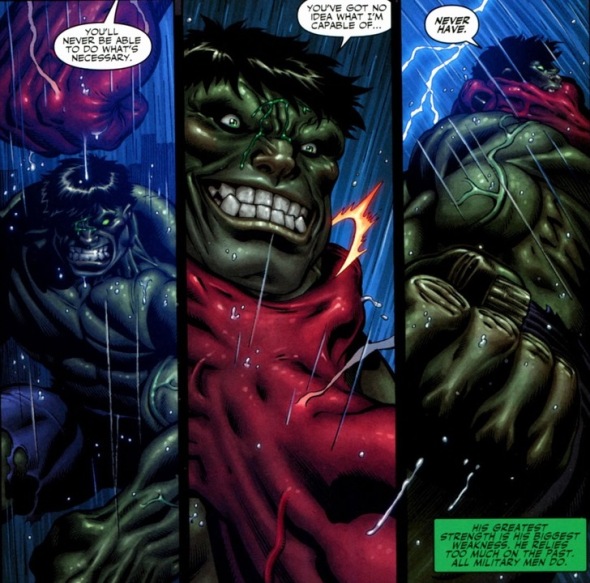 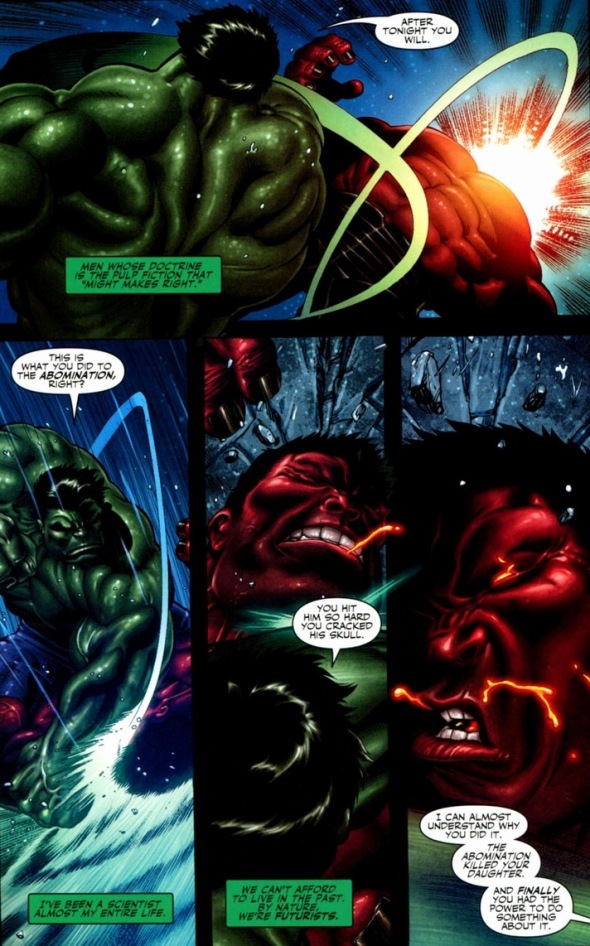 I should probably explain briefly.  In the very opening issue of the series, Red Hulk killed the supervillain Abomination.  And yes, the Abomination did kill Ross’ daughter.  Though she’s back now as Red She-Hulk, but that’s a story for another time. 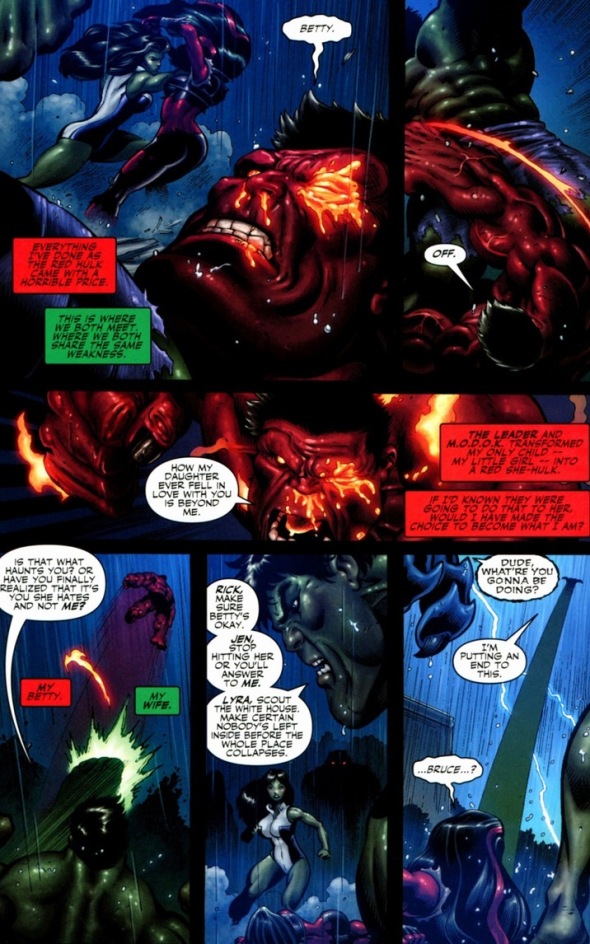 Very few characters hate like these two do.  Each pretty much ruined the other’s life — Banner running forever from Ross and his military while Ross forever hunts his white whale he’ll never win against.  Hell, Ross had baddies turn him into this monster so he can finally punch Banner to death. Turns out missiles and lasers haven’t been as effective as originally hoped.  Well, mission accomplished. Goodbye Hulk.

Normally for dramatic effect, I would go on as if the story ended here.  Ross leaves this life of violence behind and settles into a small cabin by a lake, content for the first time in his long life.  Etc.  But I wouldn’t be fooling anyone today.  You know why everyone’s scared of the Hulk?  Because of this: 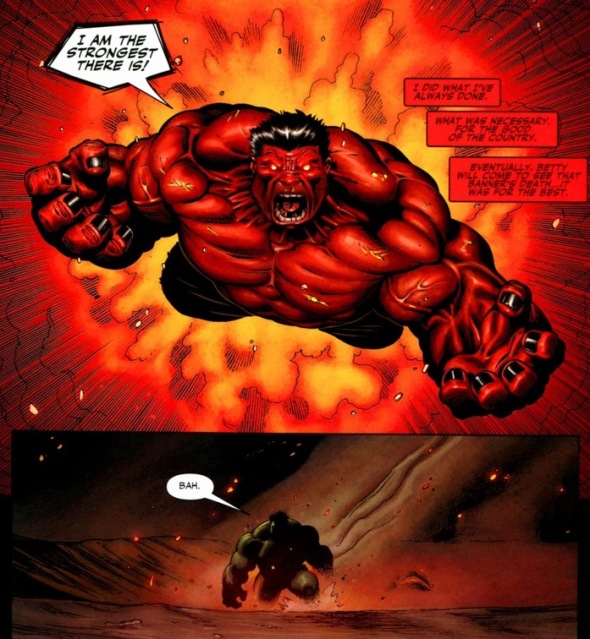 Hulk totally wins, and not just because he’s the title character of the series. While more misguided intentions rather than outright supervillain, Ross has to lose — that’s how comics work.  We have spent our entire lives cheering on our green buddy, and Ross remains the persistent antagonist/loser. Y’see, whether it takes a single issue or years, the heroes will always emerge victorious and justice will always defeats immorality.  Sure Thor can get knocked around a little, but we know in our hearts that it’s only a matter of time before Banner shows up and humbles Red Hulk.  Simple, yes, but also a fantasy I’m very much behind. 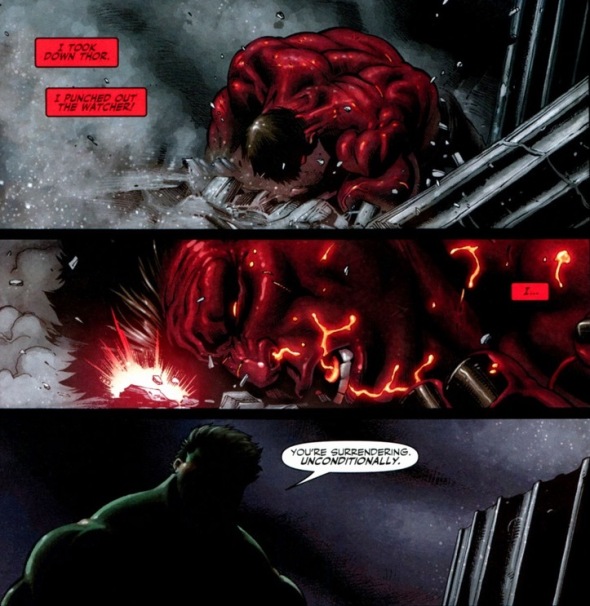 It’s not easy being a Hulk.  Time for Ross to learn that the hard way.  This Friday we’ll cover a few more fights; I promise it involves lots more punching.