For a small group of cosmically-enhanced humans, the Fantastic Four have accomplished an insane amount of stuff.  They travel the microverse, the Negative Zone, and outer space.  They’ve defeated Galactus more than once, who is responsible for destroying hundreds of planets.  Their arch-nemesis Dr. Doom has appeared in more superhero comics than any other supervillain (after Lex Luthor). They’ve successfully raised two children, which is practically impossible in the comic book world.  So how come they don’t get the fanfare the Avengers do?  I mean, Captain America doesn’t go to outer space.  Often.

Is it the uniforms?  They’re better now, I promise.  Is it all the science talk?  There’s always been less science and more punching.  Is it a lack of cool villains?  Y’know, Mole Man’s become quite powerful in the past few decades.  And remember when Spider-Man joined the team for a year or so?  You love Spider-Man, right?

As we move on to other topics on Monday, I figured one last effort to have you fall in love couldn’t hurt. Shall we begin?

In Marvel Knights 4 #4 (a series you should seriously be reading), written by Roberto Aguirre-Sacasa and drawn by Steve McNiven, the team has had to get “real” jobs when they lost all their money.  Mr. Fantastic (Reed Richards) works computers for a tech company.  On his way to work one morning, he stumbles upon this: 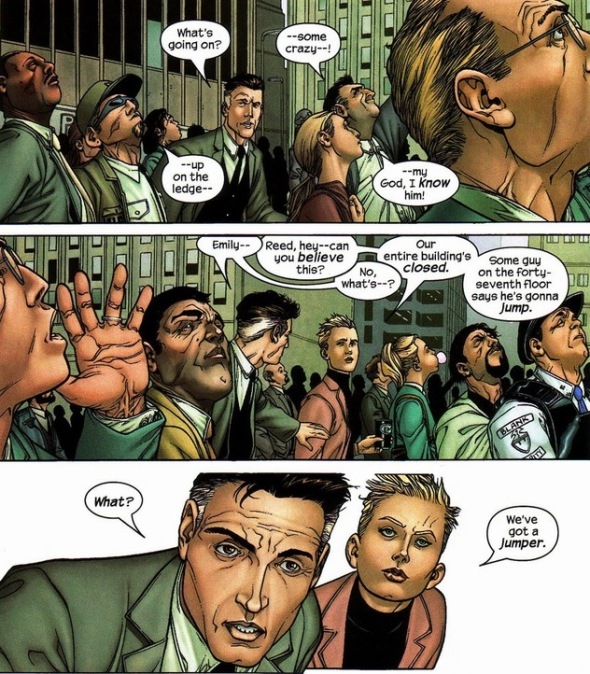 With no remote controlled parachutes or virtual trampolines to save the man with, Reed has to rely on quite possibly his weakest skill: conversation.  But gosh darn it, he’ll try, because that’s what superheroes do. 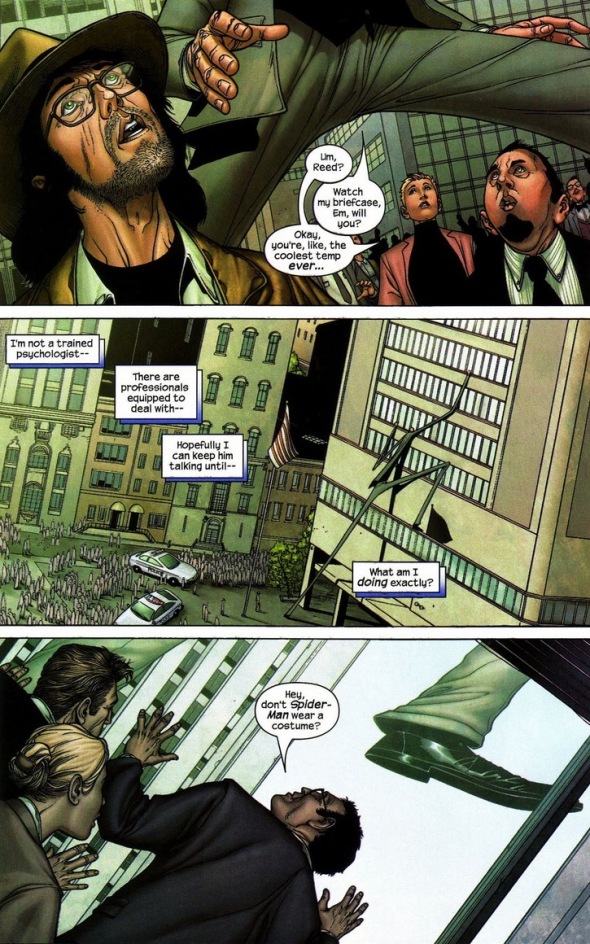 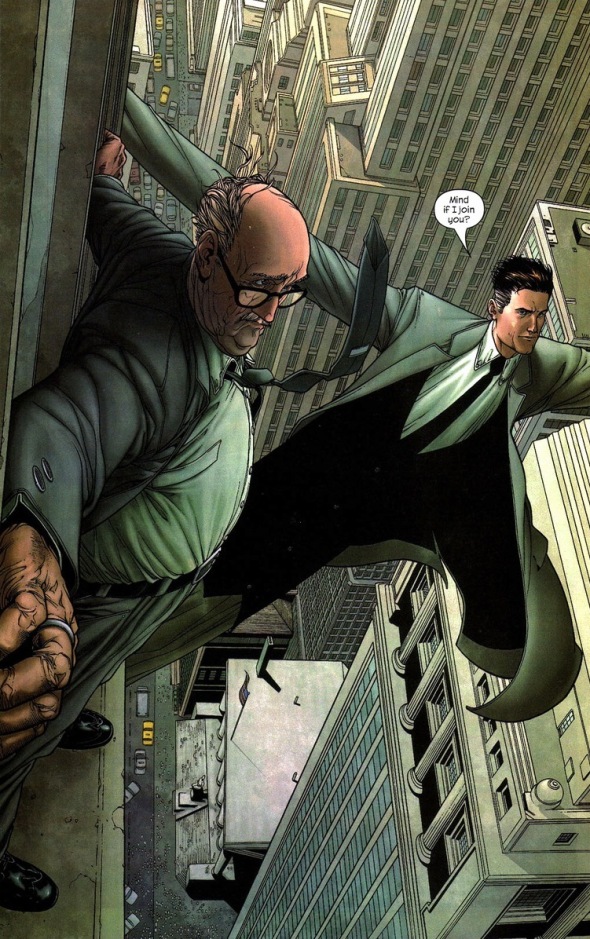 I know the jumper plot device has been done many times before.  It’s okay.  Because as Mr. Fantastic taps into that empathy section of his brain squished between quantum mechanics and alien physiology, this scene serves an important purpose: it humanizes the world’s smartest man. 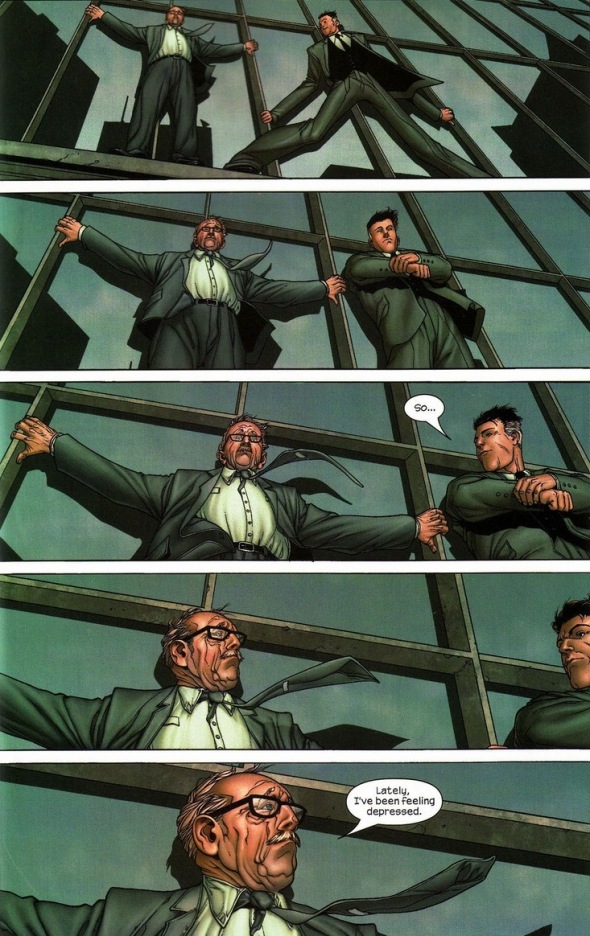 I’m a big fan of the concept of superhero-ism being more than jump kicking bad guys.  As our betters, superheroes work to make the entire comic book world a better place.  With great power comes great responsibility and blah blah blah.  Remember one of the most memorable pages from All-Star Superman?  If you read the series, you know exactly which one I’m talking about:

Powerful stuff, right?  I’m just saying that the thrill of superheroes involves more than them bloodying their knuckles.  Though that’s still a major part.

In Marvel Knight 4 #7, written by Aguirre-Sacasa and drawn by McNiven, the Fantastic Four (minus Human Torch) go camping.  Of course, being like most superhero vacations, aliens show up, abduct lots of people, and the team discovers a town’s horrible secret.  Normal superhero stuff.  When Mr. Fantastic sneaks aboard the alien mothership to rescue to captives, he and the others get trapped.

Teamwork, my friends.  What your parents and teachers have ingrained in you since you popped out of the womb comes in handy when you can’t accomplish everything by yourself.  Even the Lone Ranger has a partner.  Because Mr. Fantastic’s been working with the same three team members for over ten years, he knows exactly how the rescue will be played out — all without a walkie-talkie or e-mail or anything. 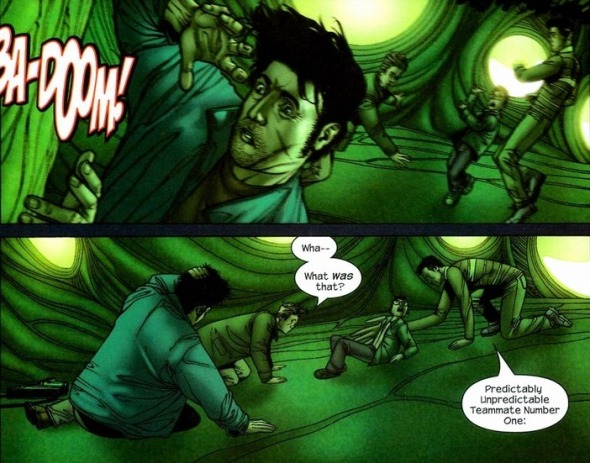 And when clambering super strength alone won’t solve the problem, well, that’s why it’s a team. 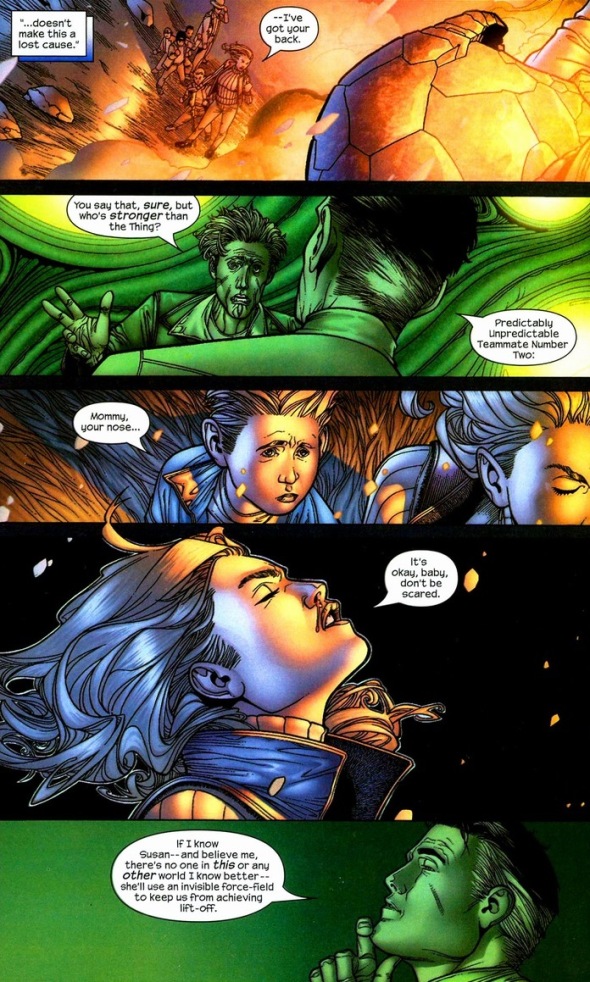 Time and time again have proven the Invisible Woman by far is the most powerful member of the team, if just because her superpower can do so many crazy things besides sneaking around and blocking attacks.  She can fly be creating and moving a force field directly below her.  She can turn an entire living room invisible with a single thought.  She can use her powers to block telekinesis and other pesky psychic powers.  She can hold off tsunamis and tornadoes.  And God help the Marvel universe if Sue Storm ever goes full-on supervillain.  She can create a bubble inside people to cut off oxygen. She could enlarge a force field to explode a person from within.  A thrown force block that’s strong and large enough could crush most superheroes instantly.

Most importantly though, she doesn’t take crap from alien invaders.

Tomorrow will be all Human Torch, my friends.  Johnny Storm, not the Human Torch that killed Hitler.