Superman’s birthday (the famous one)

Out of the 260ish articles I’ve written so far, only about ten or so are from pre-2000.  It’s not bias or lack of interest, but I started reading comics in early 2000 so my knowledge tends to start there.  But with hundreds of thousands of issues of comic books released before then, where does one possibly start to get caught up?  Well, the classics don’t hurt — Watchmen, The Dark Knight Returns, Chris Claremont’s Uncanny X-Men run, etc. etc.  I could go on for paragraphs about the few hundred issues that stand out above the rest.  And they do so for a reason.  So while I decided to brush up on some of the more well-known comics, I found one that rocked my world: Superman Annual #11, written by Alan Moore and drawn by Dave Gibbons.

It’s Superman’s birthday and his pals stop by the Fortress of Solitude to drop off some gifts!  The Justice League cartoon made a very good recreation of this comic in an episode titled “For the Man Who Has Everything.”  Today, let’s enjoy the surprise party gone bad together, but first, how about an alternative Kryptonian birthday for dear Kal-El? 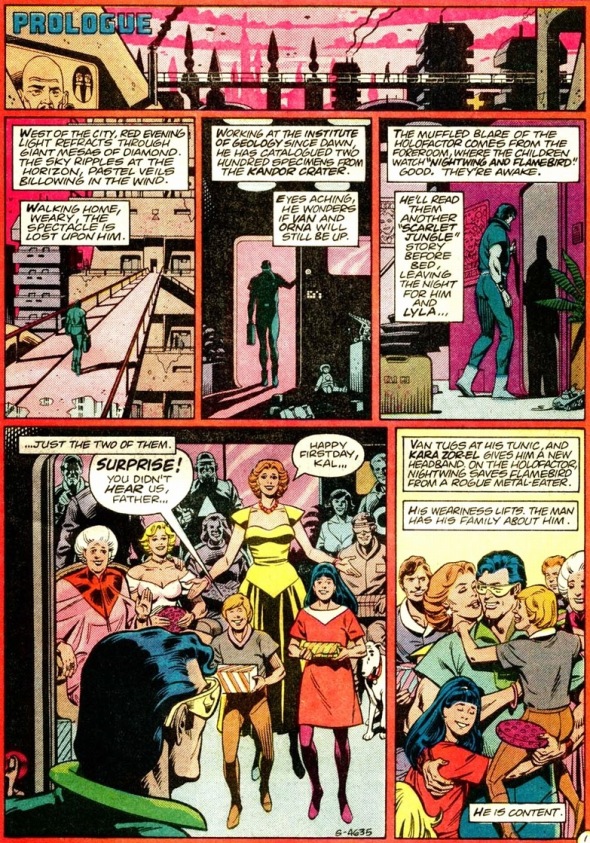 Ah, the beauty of Superman’s future if Krypton never exploded.  A loving family man, living that normal life of no superpowers and no secret identities.  It’s nice to see what could be.  Though, the real world has some perks as well: 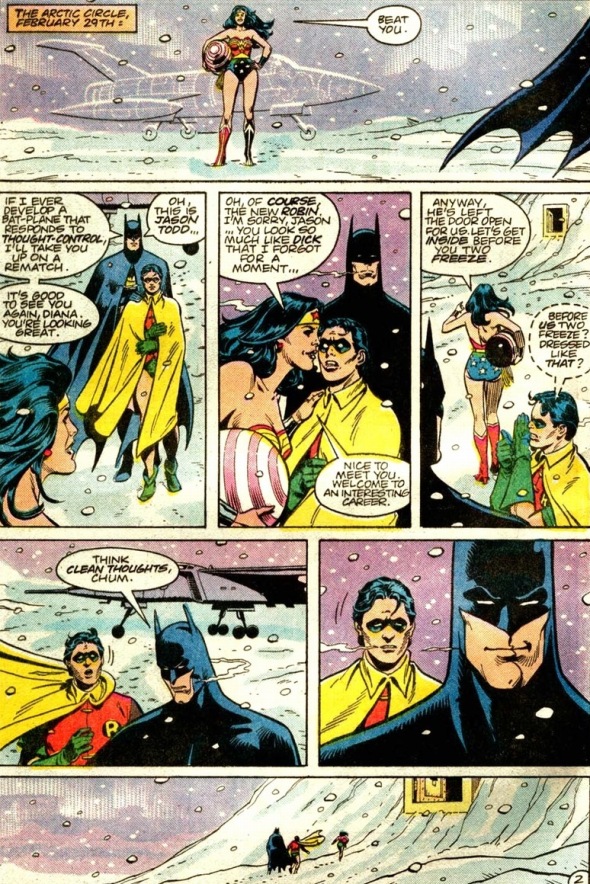 Most fans know Jason Todd as a former Robin turned supervillain turned anti-hero Red Hood, but many of us are simply too young to have ever read anything of him as the actual Robin.  Well, here you go.  Go brag to your friends.  Unfortunately, Superman’s a bit  busy to properly receive his guests. 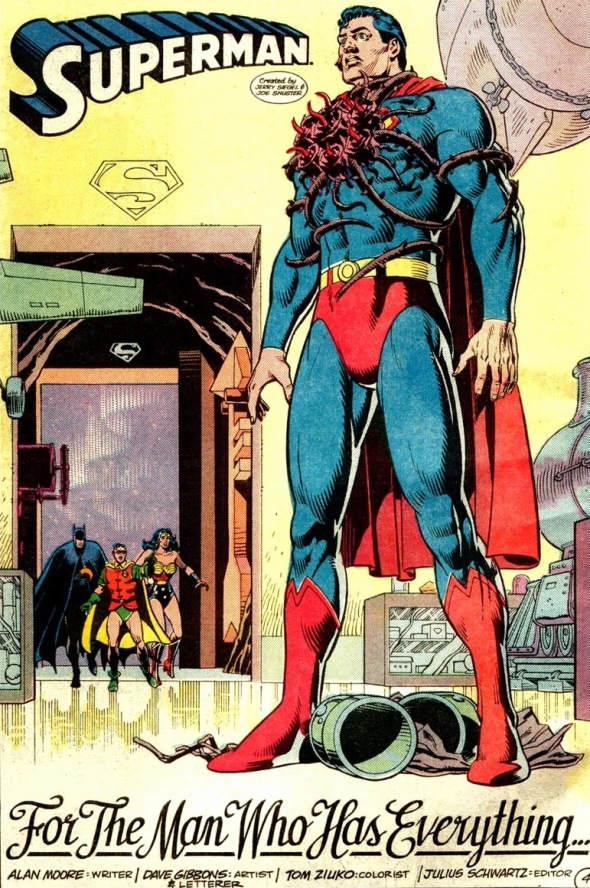 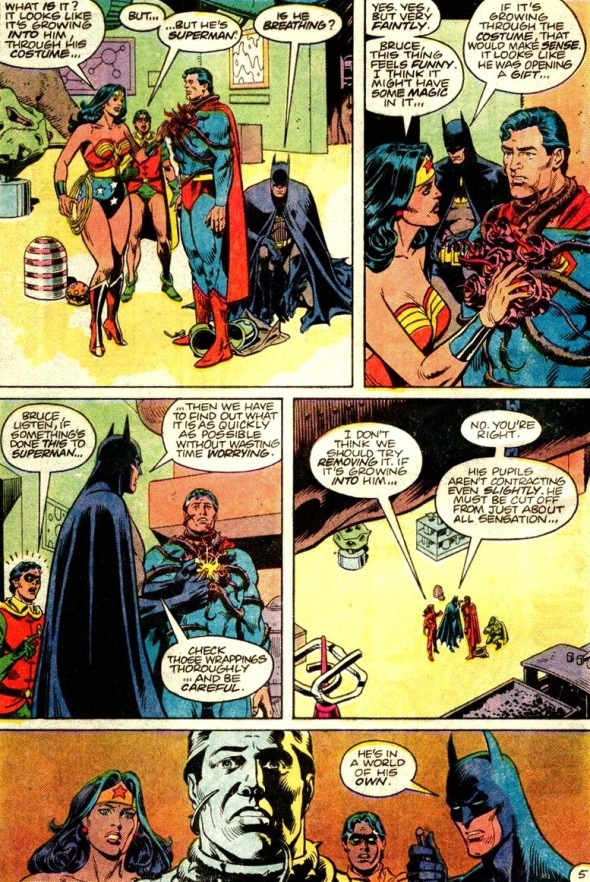 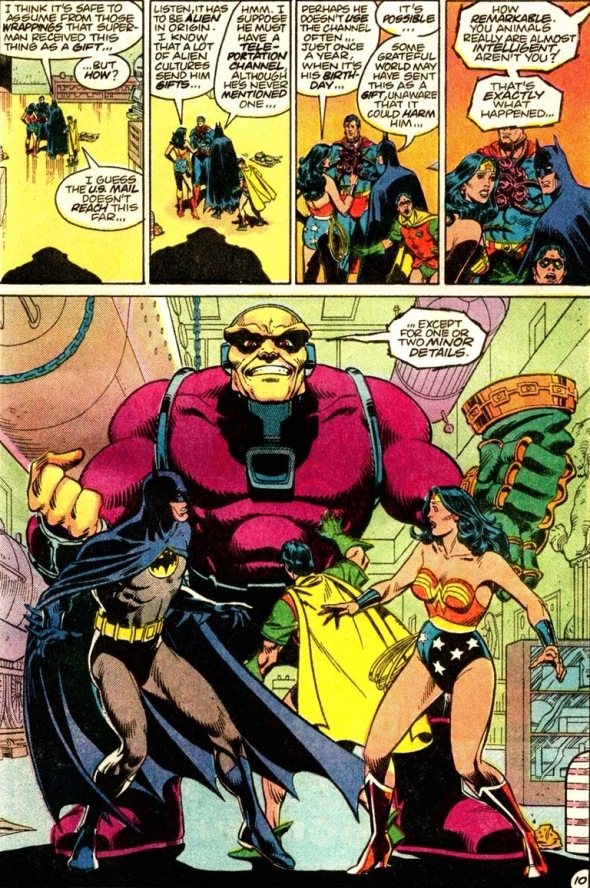 For lack of a better explanation, think of Mongul as a yellow Darkseid.  The supervillain possesses Superman-level strength and durability along with that arrogant alien warlord demeanor we expect from bad guys.  He first premiered five years before this in DC Comics Presents #27, written by Len Wein and drawn by Jim Starlin & others.  In the next issue, we get his origin, which I present to you: 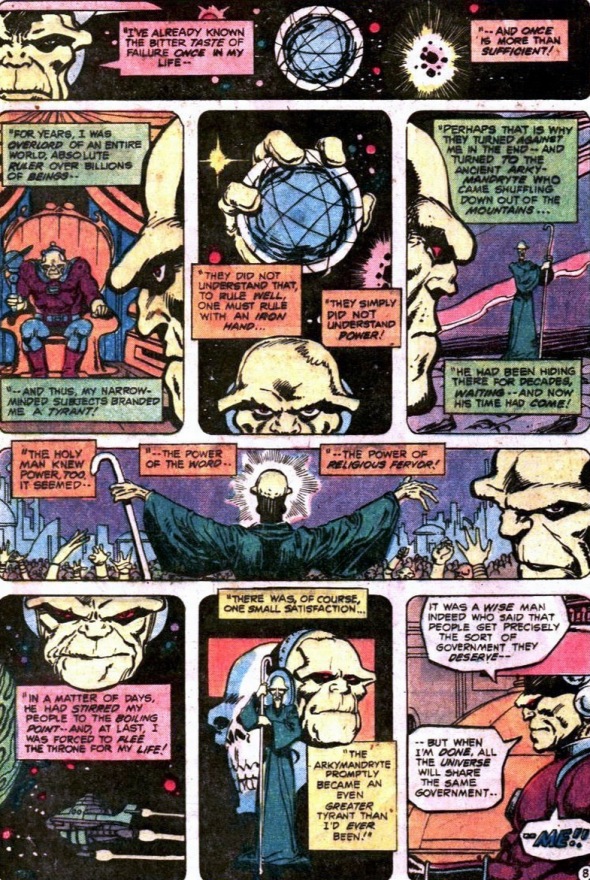 Poor space Hitlers, always looking for new aliens to conquer.  Why can’t the common people realize how good they have it being oppressed and brutalized?  Mongul, never one for giving up, figures that Earth should be as good as spot as any, with its thousands of superheroes flying around.  Though his tastes do remain eccentric, as two decades from now, his son attempts to rule the Sinestro Corps (if you want to see two space Hitlers punch each other). 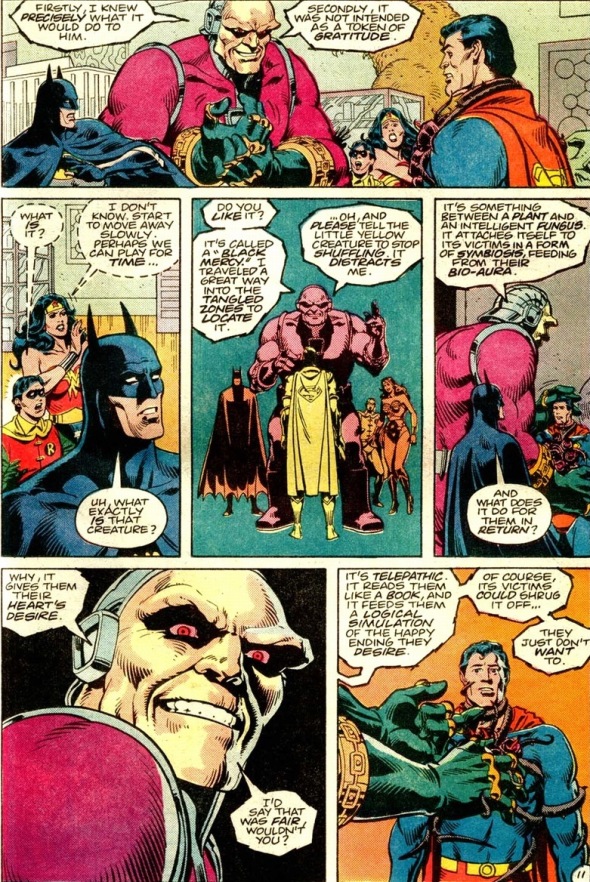 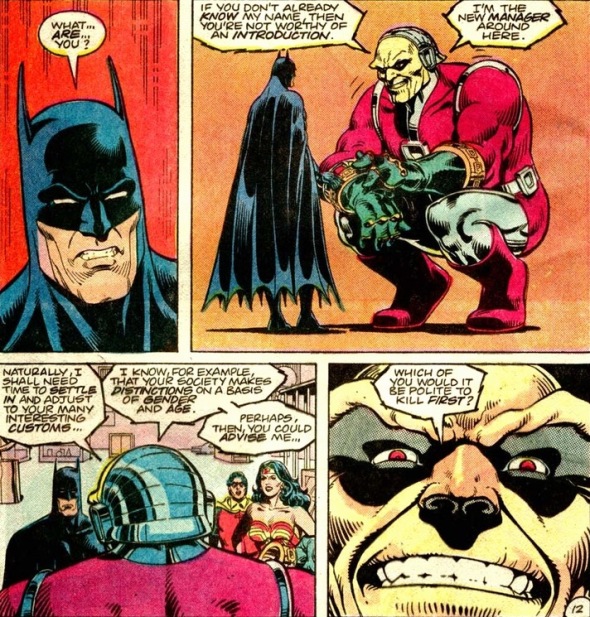 Can you guess who volunteers first?  Hint: she’s the baddest, toughest warrior not currently attached to a space plant. 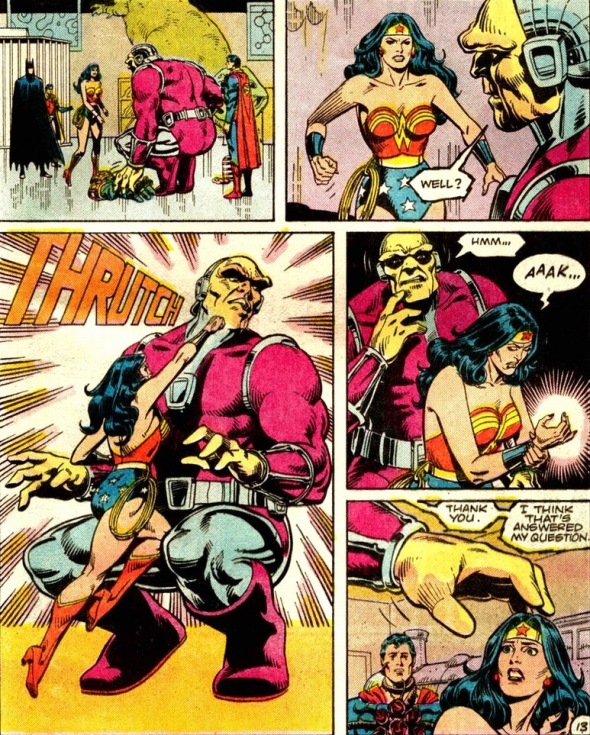 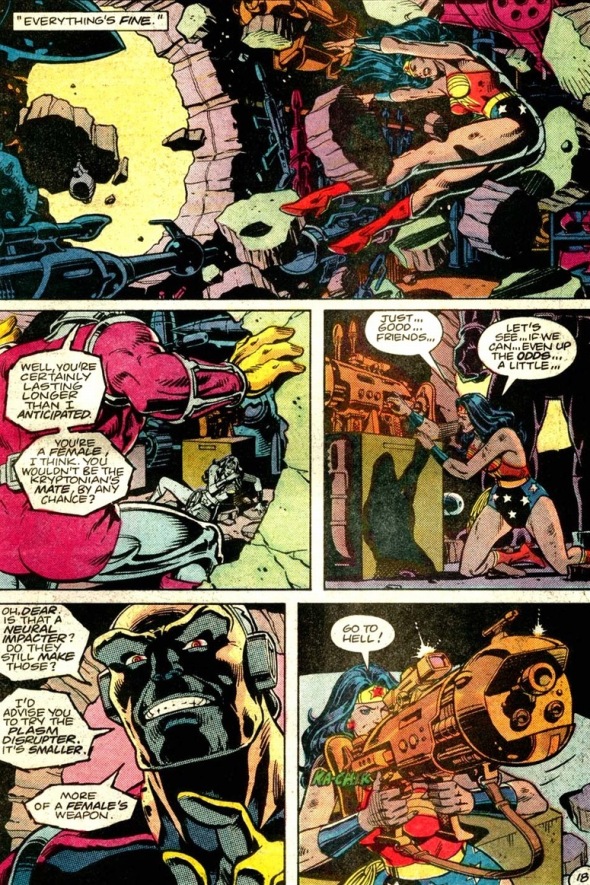 Yes, that last panel also turned me on.  But as Batman and Robin attempt to save Superman, the success of the Dynamic Duo also means the destruction of Superman’s fantasy he believes he’s spent the last thirty years living. 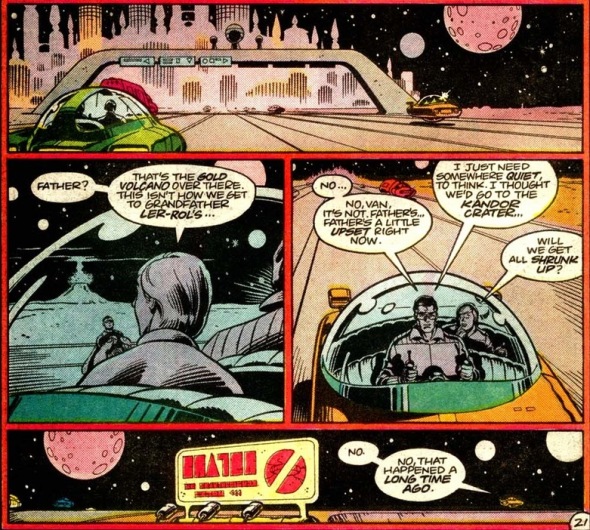 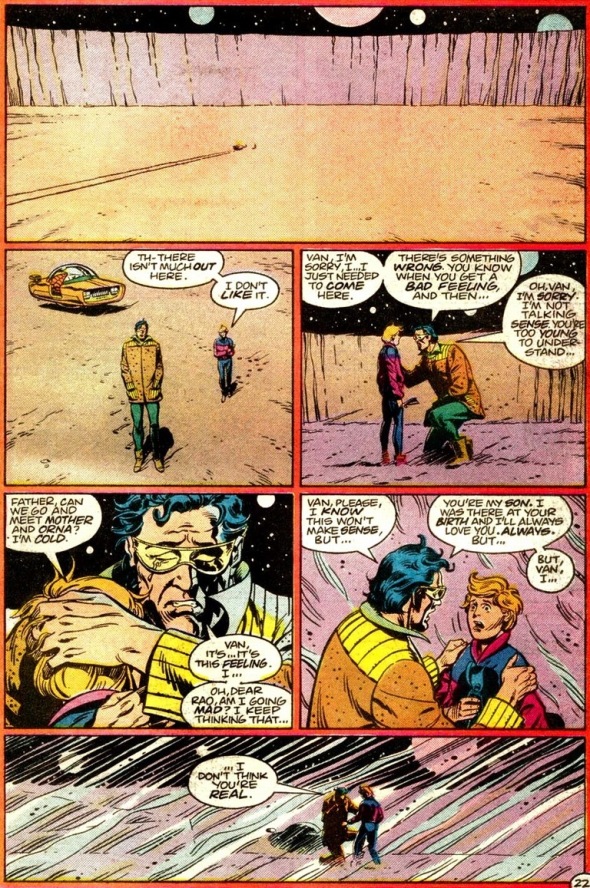 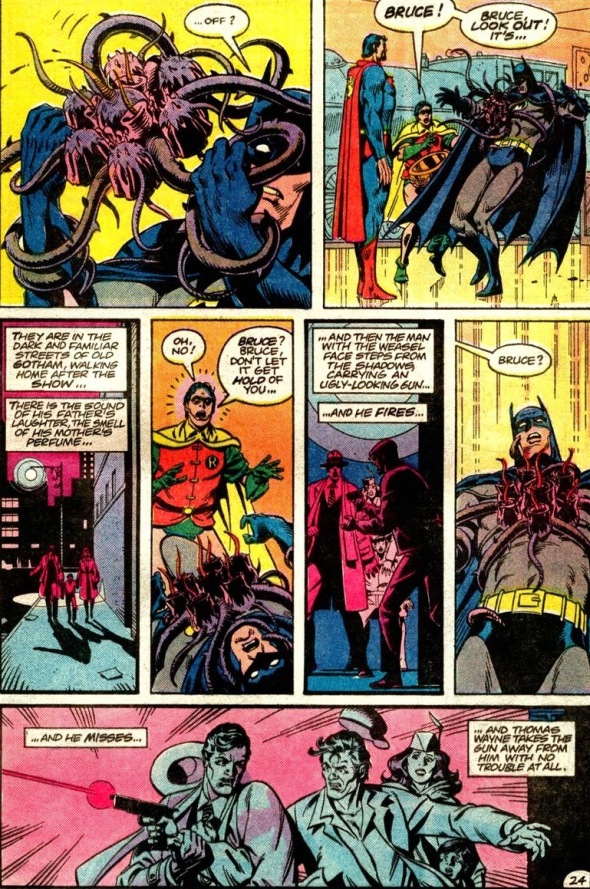 Put Batman’s fantasy aside (which is equally heartbreaking).  Look, Superman gets angry when you shoot him with acid or launch rockets at him, but his rage can’t compare to when you essentially kill his family in a false reality based entirely on his hopes and dreams.  Because when you rip open Superman’s heart, he strikes back with every ounce of his insane amount of power. 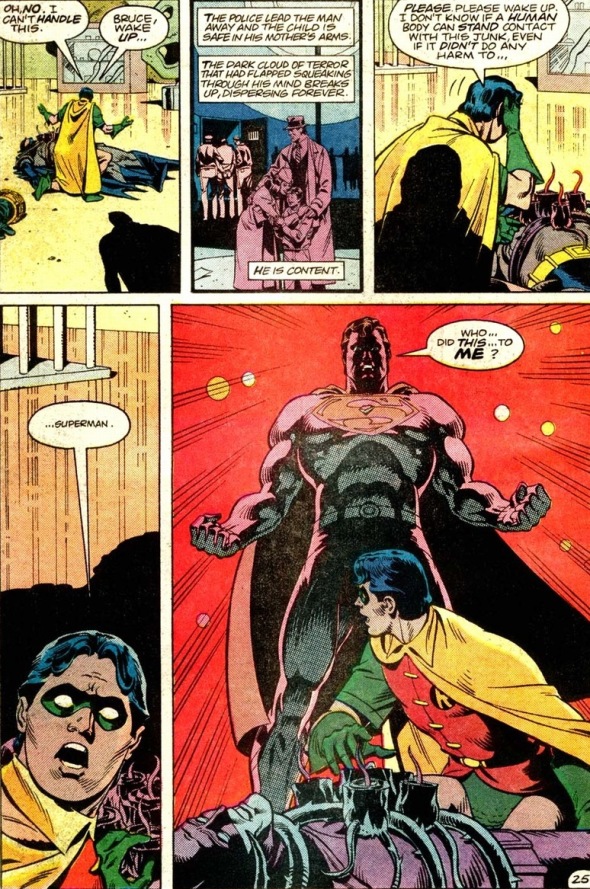 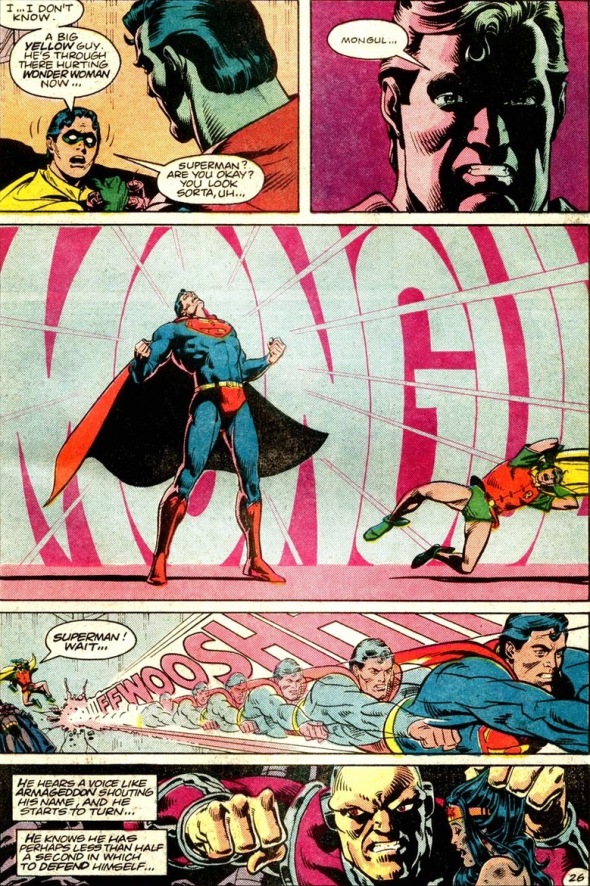 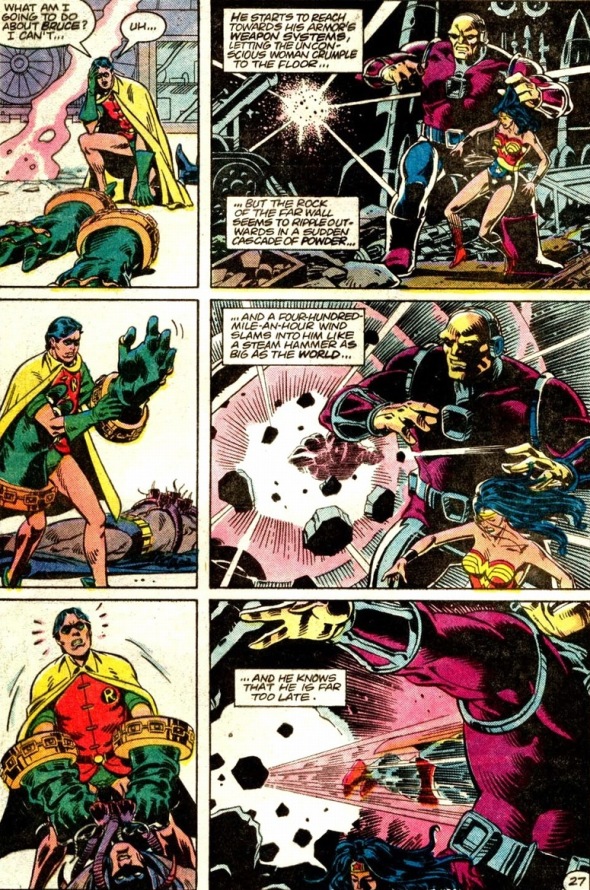 We love Superman because he holds back — a man with his kind of strength choosing to only use a fraction of it.  Self-control is expected in our superheroes, such as them not killing even under the worst of situations.  But though I love superheroes as our betters (physically and morally), nothing’s more satisfying than Superman “letting go.”  The man with the power of a god using his full god-like powers.  More importantly, Mongul deserves it. 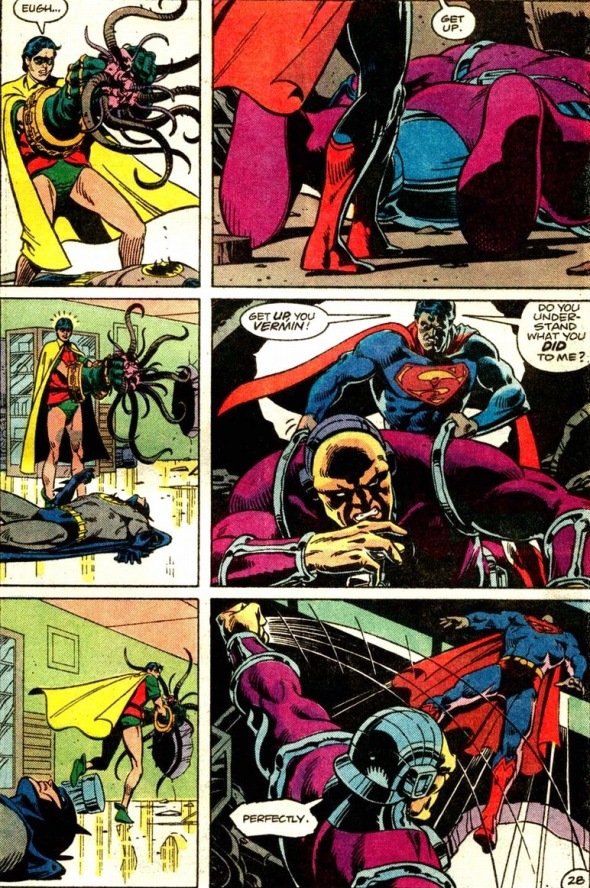 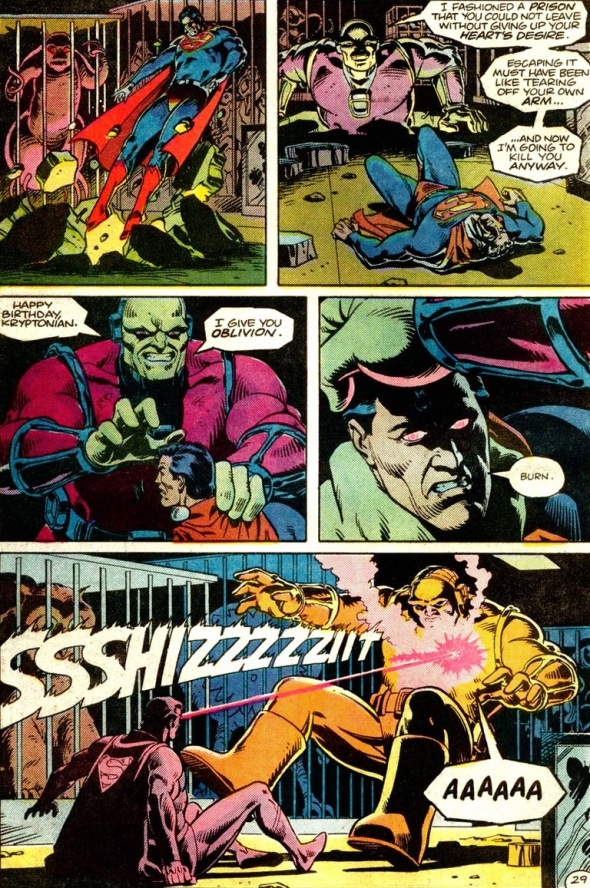 That “Burn.” panel gets included in many lists as one of Superman’s most famous moments.  You wonder why Batman keeps vials of kryptonite littered around his Batcave?  Because my goodness, the Man of Steel is pants-wetting scary when he wants to be. 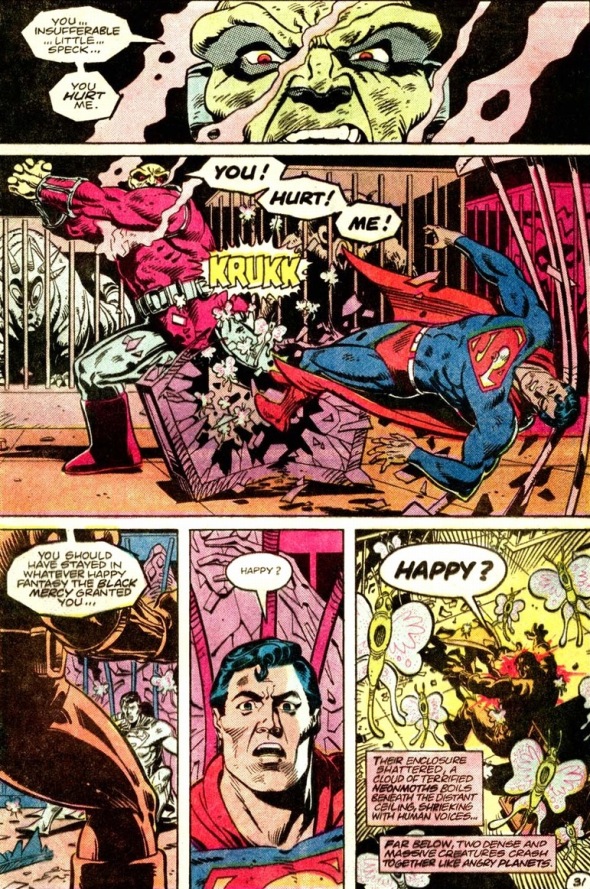 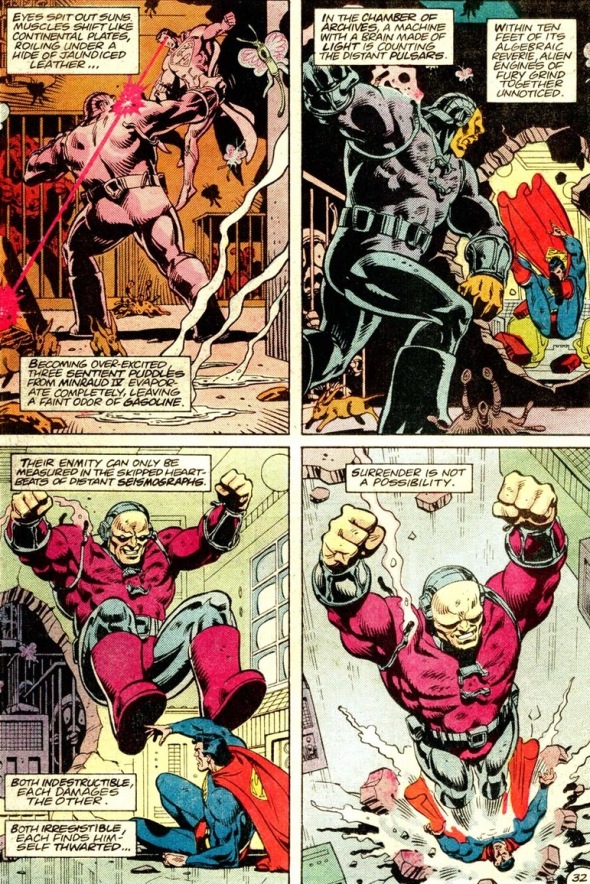 Because face smashing doesn’t seem to be slowing down Mongul’s assault, Robin saves the day. Yes, Robin.  He has to use his brains to defeat opponents, because all the kung fu training in the world can’t make up for the fact that he’s a preteen. 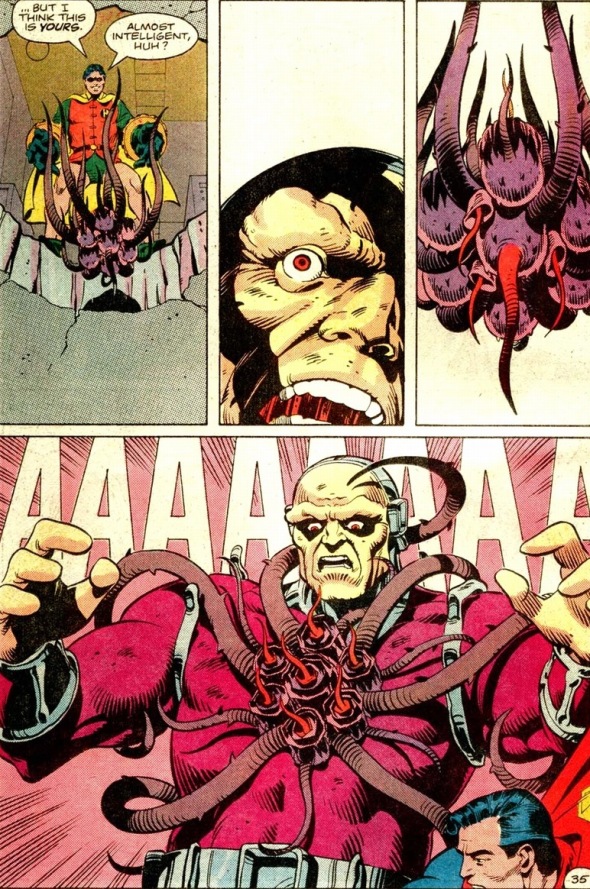 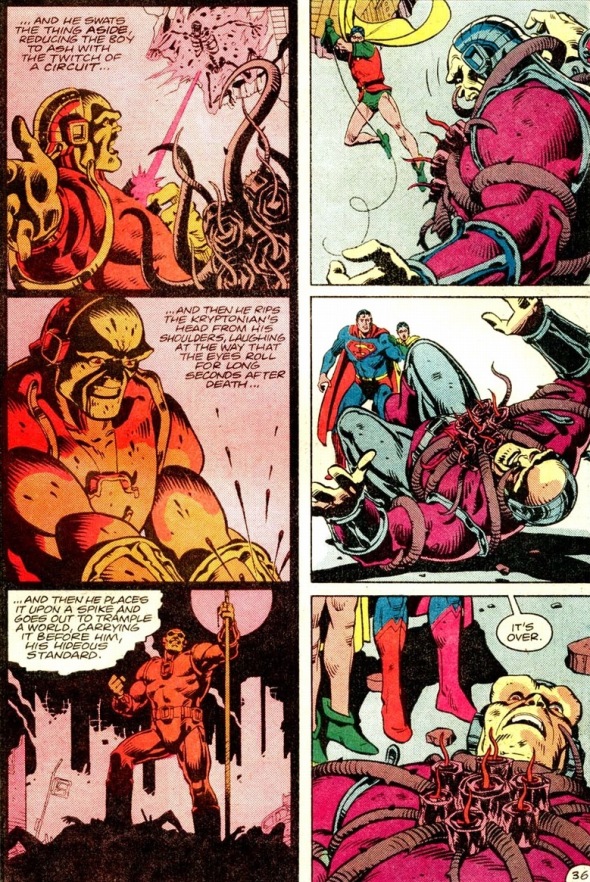 Can we all be thankful that comic’s greatest hero’s fantasy is a family?  Because when you consider some of the alternative fantasies, the sea of blood overflows like a blood tsunami breaking a dam made of blood. 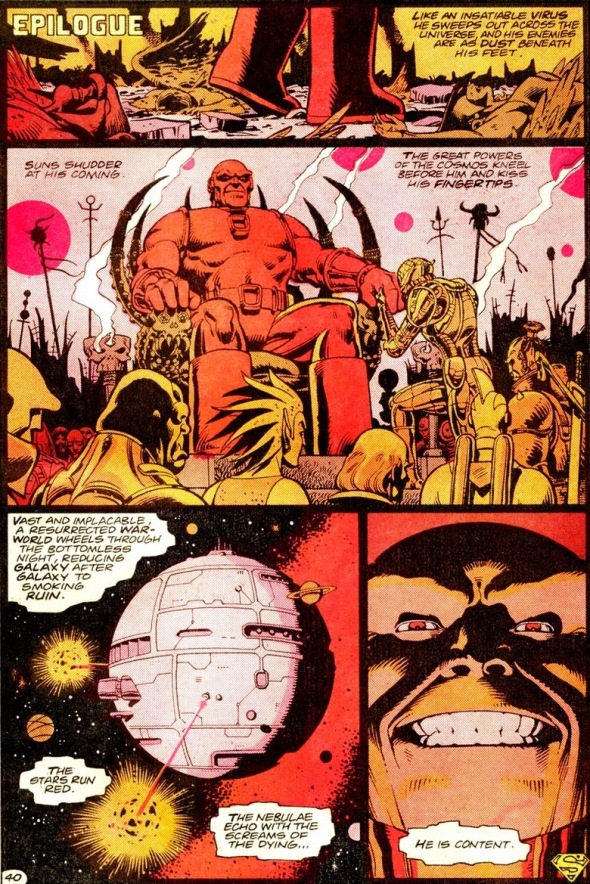 And so am I.  We should all read more of the classics.

3 Comments on “Superman’s birthday (the famous one)”