Let’s continue my ongoing series to uncover the stories behind Comic Book Resources’ Top 70 Most Iconic Marvel Panels of All-Time, something which is definitely not a desperate grab for an article when I run out of ideas.  Check out the full list here, but today we’re going to explore #20, which includes one of the most famous Captain America lines of the past decade: 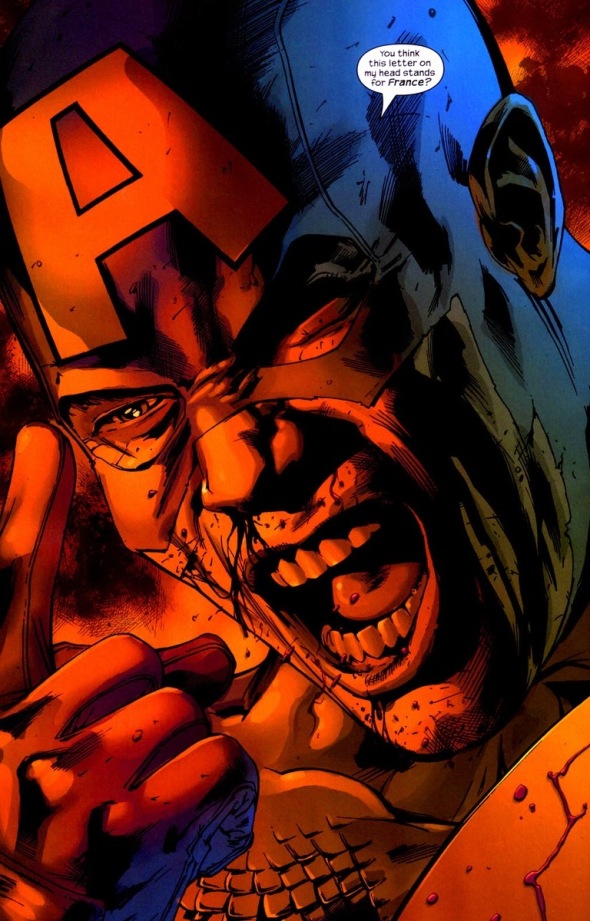 Angry, bleeding, condescending Captain America remains my favorite interpretation of the character. The Ultimate universe’s Captain America absolutely rocks you and everyone you love.  Back in the infant days of my blog, I covered his shrine-worthiness here.  Honestly, Ultimate Captain America is everything I’ve ever wanted in a superhero and we get to see him in all his patriotic, Nazi-bashing glory today in Ultimates #12-13, written by Mark Millar and drawn by Bryan Hitch:

Right?  Most people born in 1920 can’t log onto a computer, much less pilot a top-of-the-line fighter jet.  I mean, if you ignore the fact that he pilots it into tankers full of gas: 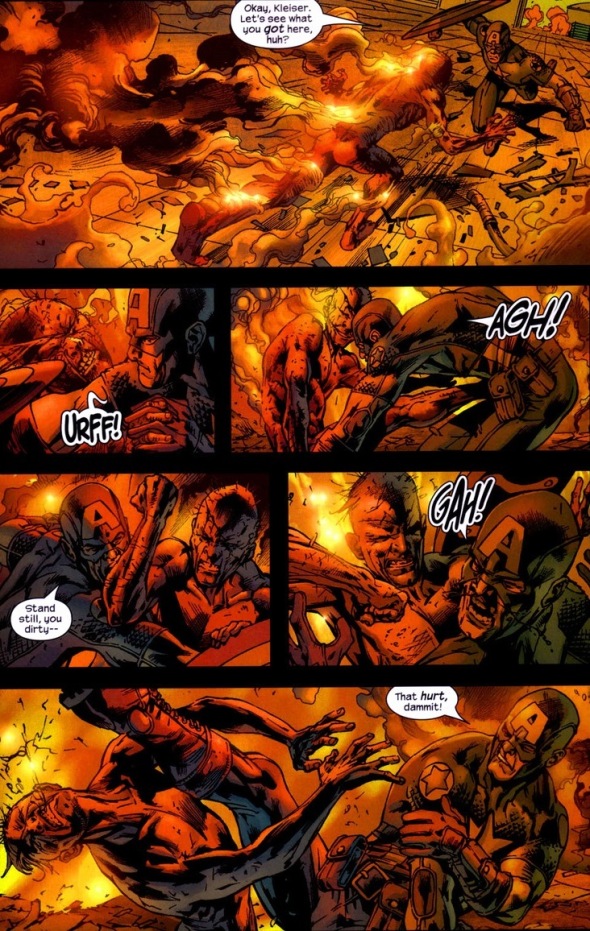 As a full disclaimer, I’m an American.  And yes, we’re a proud people.  Maybe too proud.  Pride bordering on delusion.  But no symbol of our country will ever have his butt handed to him by a dirty, evil Nazi.  Even an alien masquerading as one.  Blast “God Bless America” until the walls shake. Wave that flag valiantly over the unkempt lawn.  Choke on hot dogs and apple pies until you’re red, white, and blue in the face.  Not one American — not in comics books, real books, movies, TV shows, poems, laser light shows, whatever — will ever get his brains bashed in by the world’s agreed upon most vile enemy.  I mean, not immediately.  Soon.  We’re the good guys, gosh darn it.

As the situation reaches its hopelessness apex, that’s when the music swells and our hero stands up for truth, justice, and the American way.  The Marvel version of that, anyway.

It feels good no matter which country you’re from, right?  Well, except France probably.  Ultimate Spider-Man took a bullet for this man, and despite it leading to the teenager’s death, there’s no better man to make that sacrifice for.  To lay some of the guilt off the good captain, Spider-Man singlehandedly fighting the Sinister Six on his front porch was the real culprit, though I imagine the gaping bullet wound didn’t help any.  But back to our story, happy ending for Ultimate Captain America.

On Friday, let’s not ruin a good thing — we’ll enjoy another Captain America famous panel story. Because you deserve it.  You always deserve it.