I made a statement a few articles back that out of all the JLA members, I know about Martian Manhunter the least.  I lied, oh, how I lied.  Because after spending some time reading more DC, I realized that there’s one member I’m wildly in the dark about: Plastic Man.  So today, let’s remedy my ailment and explore a story in JLA #65, written by Joe Kelly and drawn by Doug Mahnke, where the DC universe’s funniest superhero teams up with DC universe’s least funny. 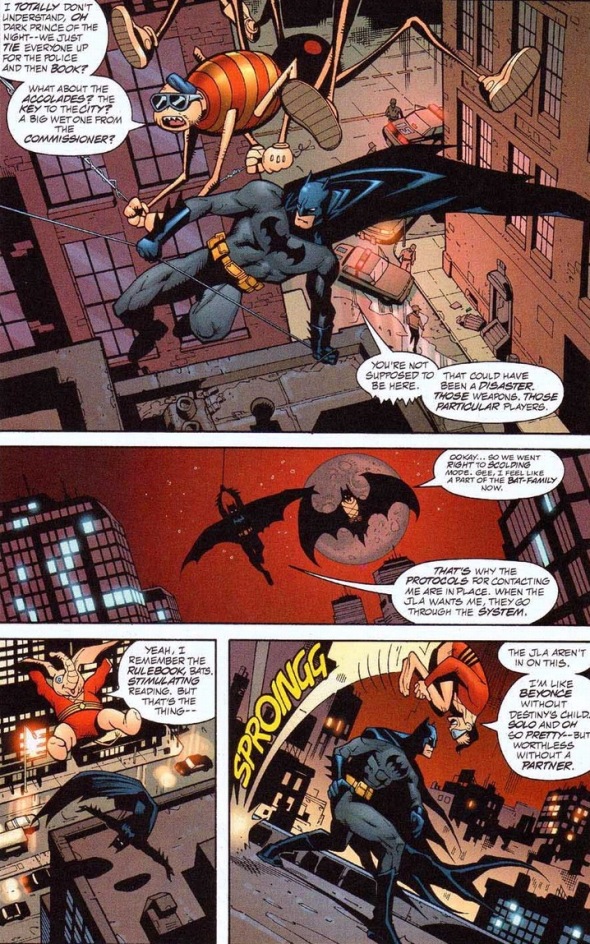 Plastic Man has been around since 1941.  That’s two years after Batman.  A former criminal and basic henchman, Patrick “Eel” O’Brian got shot and splattered with chemicals.  His gang left him behind and now he has a body like rubber.  And he fights crime.  Chemicals are so much more fun in the DC universe — in real life, you just get an eye rinse and a lecture on safety.

With Batman reluctantly assisting Plastic Man — I’m assuming Justice League membership comes with one redeemable favor/finger wagging from the Dark Knight — the duo does what all good detectives do: gather clues.

Before we tackle Plastic Man’s shortcomings, have you noticed a theme in comics starring the silly superheroes?  On paper, Plastic Man is far more dangerous and powerful than Batman, yet the Dark Knight makes criminals wet themselves while Plastic Man dodges scores of bullets shot by apathetic baddies.  Funny doesn’t equal respect in the superhero world.  Spider-Man has the same problem — and I know he uses humor so the bad guys underestimate him — but notice now that Doc Ock took over, the supervillains duck and cower when the web-slinger swings by?  Less jokes, more face slashing.

And this boy our two protagonists are searching for?  Turns out the world’s greatest detective isn’t needed to solve this mystery.

Plastic Man can shapeshift into whatever his dear heart wants.  He can change his size, his malleability, and even heal himself.  He may even be immortal, having once survived a 3,000 year gap at the bottom of the ocean.  He’s just not a good parent. 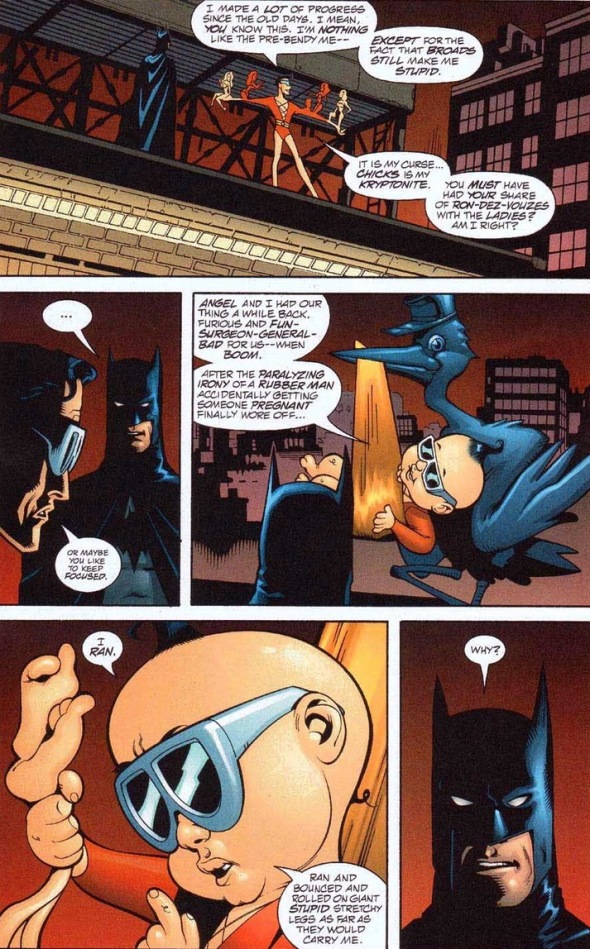 Oh, I adore Batman’s final line.  I don’t think we as readers realize the psychological damage the Dark Knight can inflict when he so desires.  We remember the goofy Batman of the 1950s and 1960s. We know Bruce Wayne’s sad little orphan origin.  But because we aren’t scared of Batman, doesn’t mean normal folks aren’t.  Plus, who doesn’t love the idea that Superman (with his godlike powers) doesn’t frighten criminals but Batman (with the powers of a middle-aged man) makes bad guys cry upon a small glimpse of that cowl.  For this next scene, use your favorite Batman voice for maximum effect (Bale, Conroy, etc.). 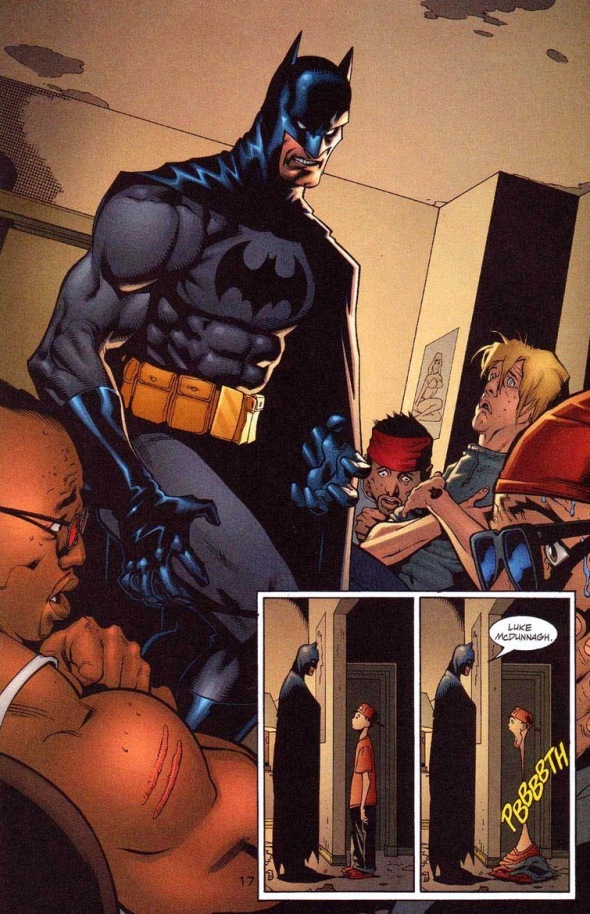 Unlike some of Batman’s trophies, he wears Plastic Man as a belt.  The giant penny doesn’t fit around the waist, after all.  Y’see the dual benefit of this tactic?  The kid gets scared straight while Plastic Man doesn’t have to cough up any parenting responsibility.  Major personality changes take time and usually get retconned anyway.  We’ll end today with a small glimmer of hope for our rubbery man, because that kid Luke McDunnagh?  You’re looking at the future superhero Offspring.  Teen Titan certified and everything. 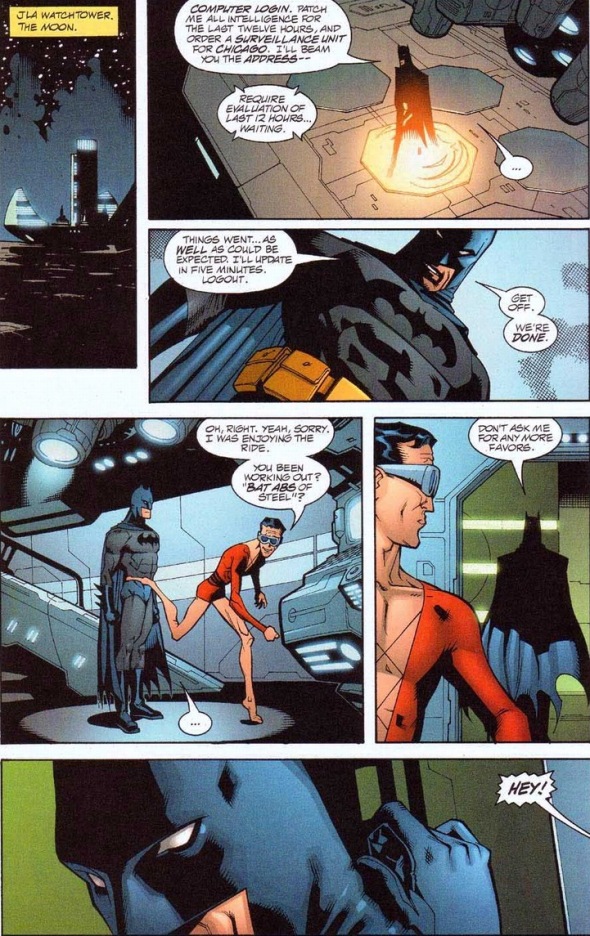