We left off right as the X-Men attacked the Hellfire Club’s little base, because the people in the base savagely beat Pixie and dozens of other mutants and totally deserve this beatdown.  Note for future bigots: if one wishes to attack a minority group of people, it would help if this minority group aren’t all trained fighters with superpowers like laser eyes and diamond skin.  We’ll pick up once more with Uncanny X-Men #501-503, written by Matt Fraction & Ed Brubaker and drawn by Greg Land with the beginning of the X-Men’s retaliation:

We know enough about superhero fights that henchmen never stand a chance.  They exist solely to ramp up the excitement and show off what our heroes can do.  Crowded battles rock.  But let’s not forget about the mutant supervillain Empath (Manuel de la Rocha) and his emotional death glares.

I know we’re supposed to witness Empath igniting each X-Man’s individual biggest emotional burden, but I’m more focused on Cyclops helping Wolverine up.  Remember when they used to be friends? Teammates?  When they didn’t attempt to slaughter each other under the boot of a murderous sentinel? This comic is only five years old — the Marvel universe changes quickly.

Oh yeah, and now that motorcycle chase I promised: 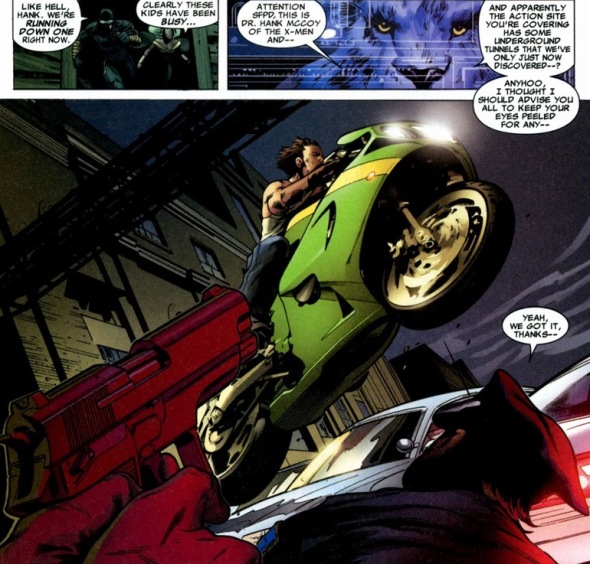 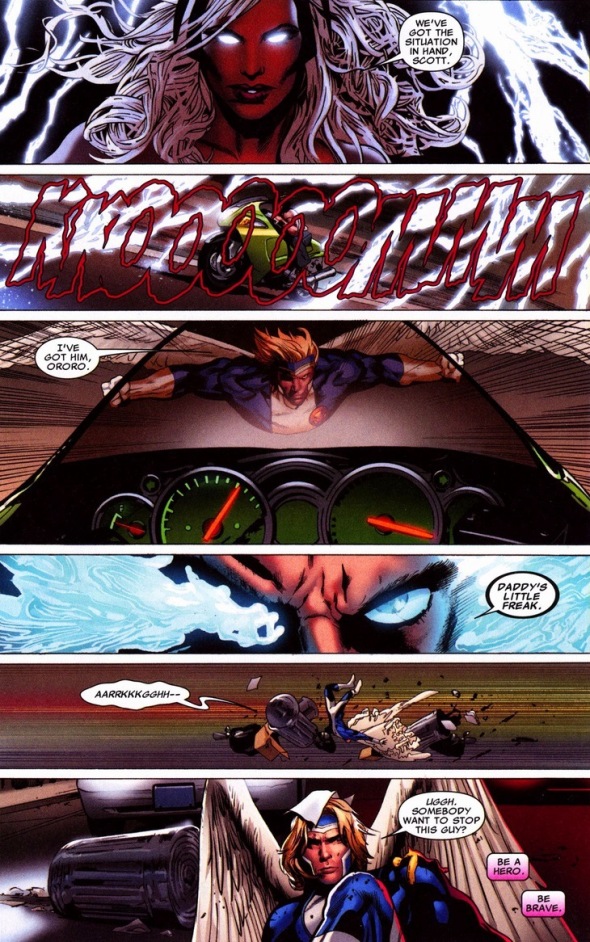 Notice the pink text boxes?  That’s not Angel speaking, because I assume his would look like clouds or something.  Truthfully, if this issue only involved Pixie getting beat up and then her hanging out in the infirmary the rest of the arc, her name wouldn’t be in the title of the article. 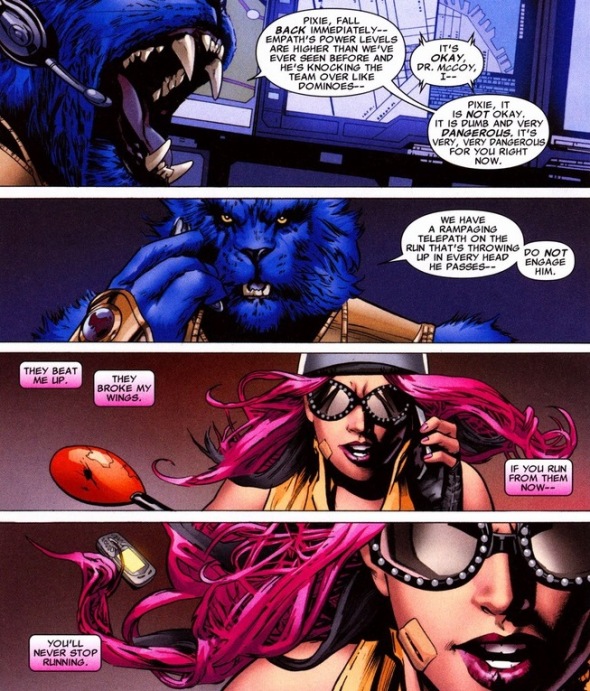 So let’s talk a bit about Pixie.  Originally from Wales (didn’t know you were supposed to read her dialogue with an accent, right?), Megan Gwynn enrolled in the Xavier Institute as part of the New X-Men series they released back in the mid-2000s.  Because when X-Men run a school for teenage mutants, it’d be smart to populate the school with actual teenage mutants.  Her mutant powers consists solely of the insect wings and hallucinatory dust.  Everything else came from one really bad experience in Limbo.  Magik — Colossus’ sister and ruler of Limbo — uses part of Pixie’s soul to create a Souldagger.  If you want to be angry at Magik for corrupting a young girl’s essence, just remember that Magik has had goat legs for much of her adult life.

Anyway, Magik teaches Pixie some teleportation magic (making that ability a black magic spell and not a mutant power) as well as being able to pull out that Souldagger to demon-style slash up baddies.  And finally, notice those black streaks in her pink hair?  Besides being fashionable, that’s black magic residue at work, my friends.  Yes, the Marvel universe is insane — in the absolute best possible way.

We jump back to the motorcycle chase.  The reserve team (Cannonball) has been called in for a scene right out of an action movie. 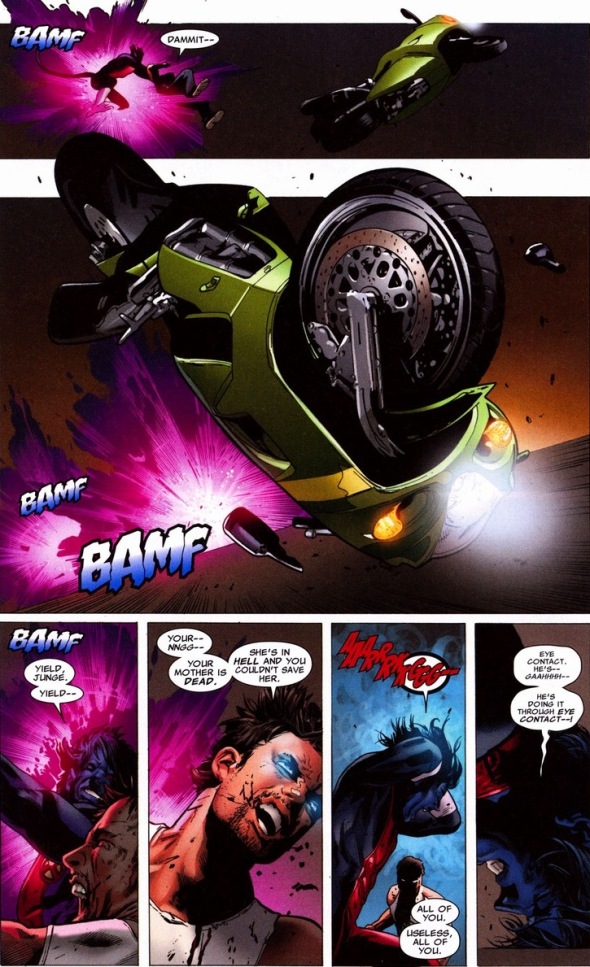 Trust me, I adore delusional supervillain rants.  Something about an egomaniac screaming despite a full squadron of X-Men just moments away.  But everything comes full circle — a redemption only possible in superhero stories.  Empath ordered his henchmen to maul all mutants in order to prevent mutants from bringing about the end of the world.  Violence to stop violence.  But we as readers understand full well that to stop evil, violence remains an acceptable solution.  We embrace it.  We look forward to it.  All superheroes end their stories with bloodied knuckles and a furrowed brow.  Even the cutest, sweetest superheroes can’t escape this ideology.  Because after all, the cutest, sweetest superheroes are still superheroes. 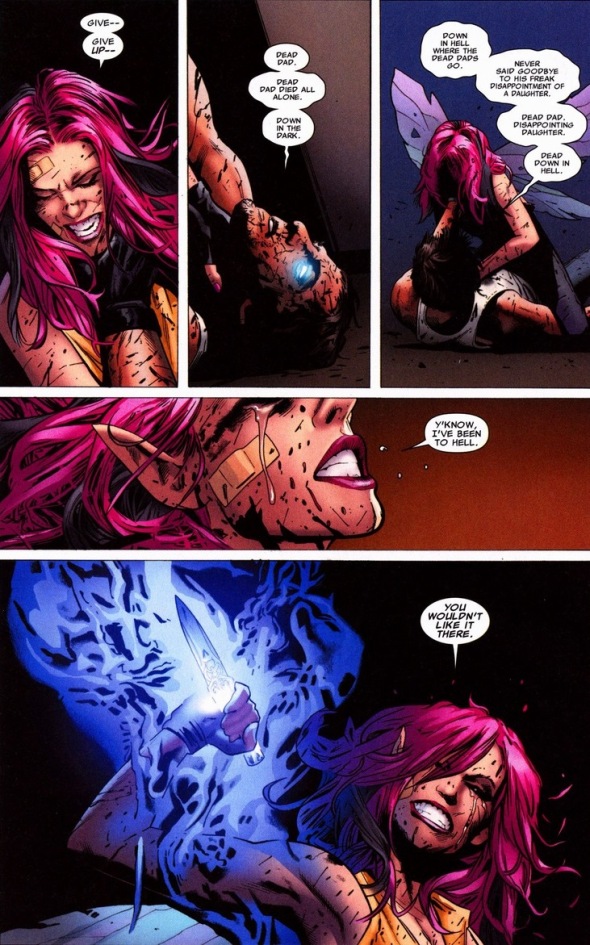