← Spider-Man vs. Thing
The complete story of Bill and Kelda, Pt. 4 →

After a week of love, romance, and all that other gross mushy stuff, let’s take a week off for punching. We’ll get back to emotions and feelings next week.  Today, we start with Ultimate Captain America battling Ultimate Hank Pym from Ultimates #8-9, volume one, written by Mark Millar and drawn by Bryan Hitch.

Y’see, since Ultimate universe isn’t part of the canon Marvel universe, they have the freedom to do whatever they please with the characters.  Like instead of a mentally ill Hank Pym backhanding his wife Janet Pym once and then spending the next thirty years attempting to redeem himself, Ultimate Hank Pym has a history of abuse and just ended the previous issue by unleashing thousands of hungry ants onto the shrunken Janet Pym.  That tends to be a bit more calculating and vicious, and the good captain would like to have a word. 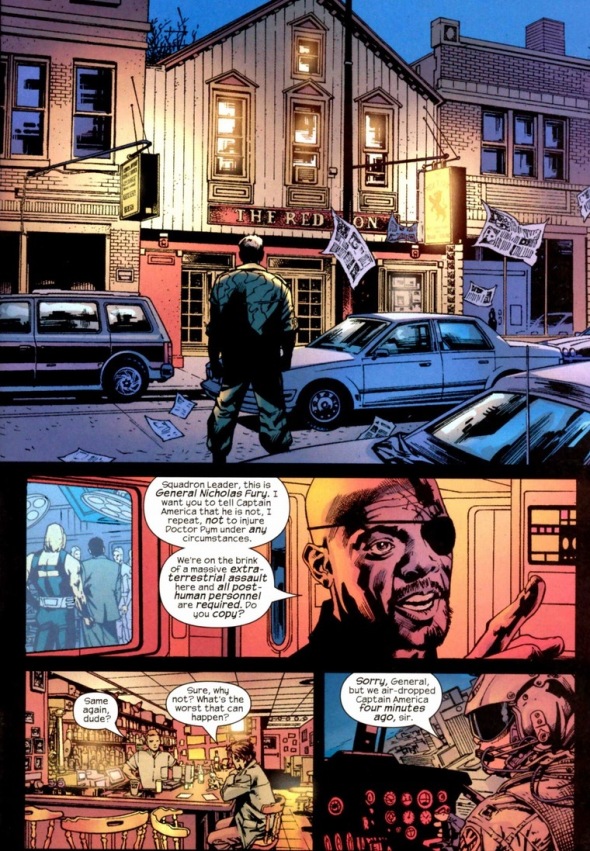 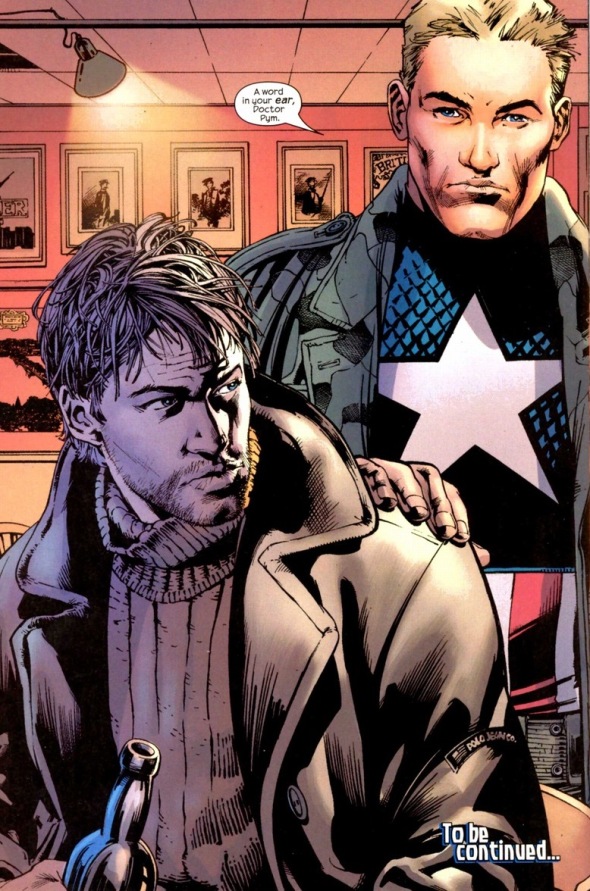 Please keep in mind this isn’t the normal flag-waving moral paragon back in our canon universe.  Sure, he’s all that here, except for this Steve Rogers coming clean off a 1940s Nazi-shooting, explosive-ridden war zone that he never really recovered from — less superhero, more soldier.  At least his personality anyway: he calls Hank Pym a meatball in two pages.

So when a former Avenger almost kills another Avenger with an army of killer insects, he’ll have to answer to Captain America.  And once again, by answer I mean get punched in the face. 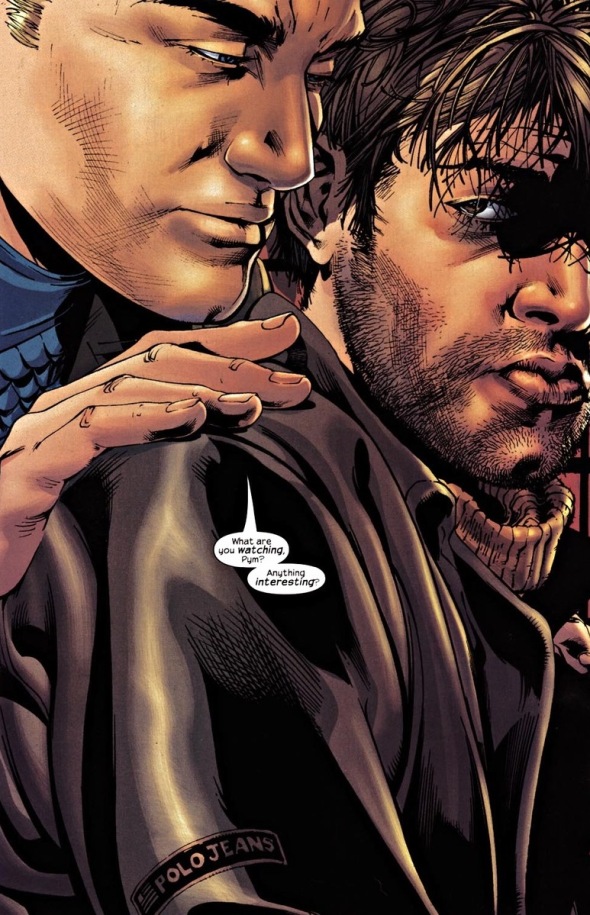 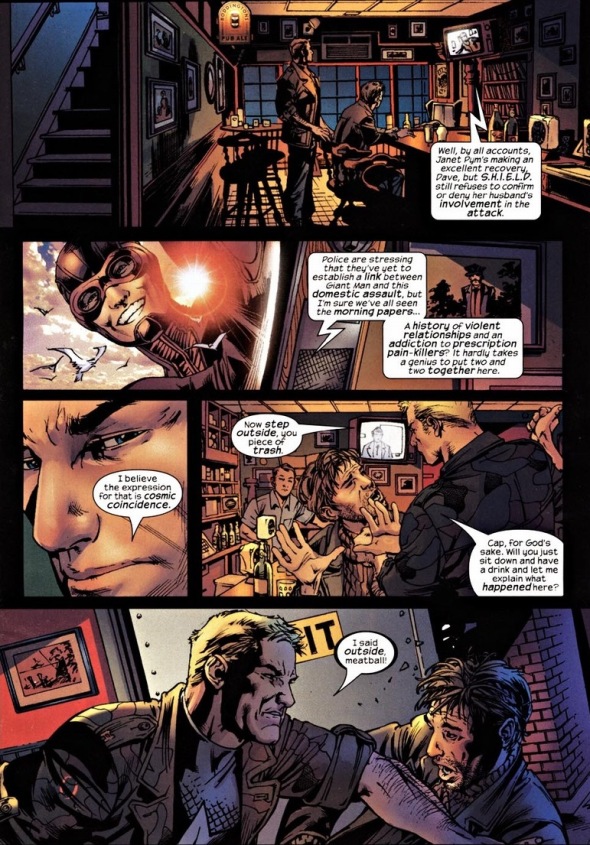 While meatball doesn’t really have much of a crippling derogatory effect, compared to Captain America’s 0% body fat and perfectly sculpted super soldier build, we’re all meatballs by contrast.

Nick Fury’s screaming at the beginning today rings true — there is an alien invasion upcoming and savagely beating a drunk Giant Man will solve nothing but potentially bruising Captain America’s fists. And he needs those for punching. 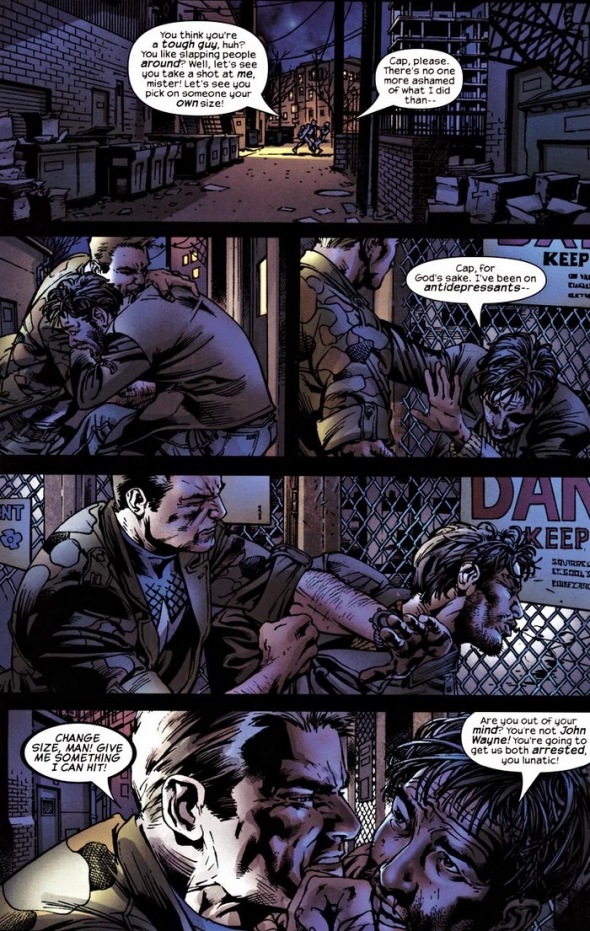 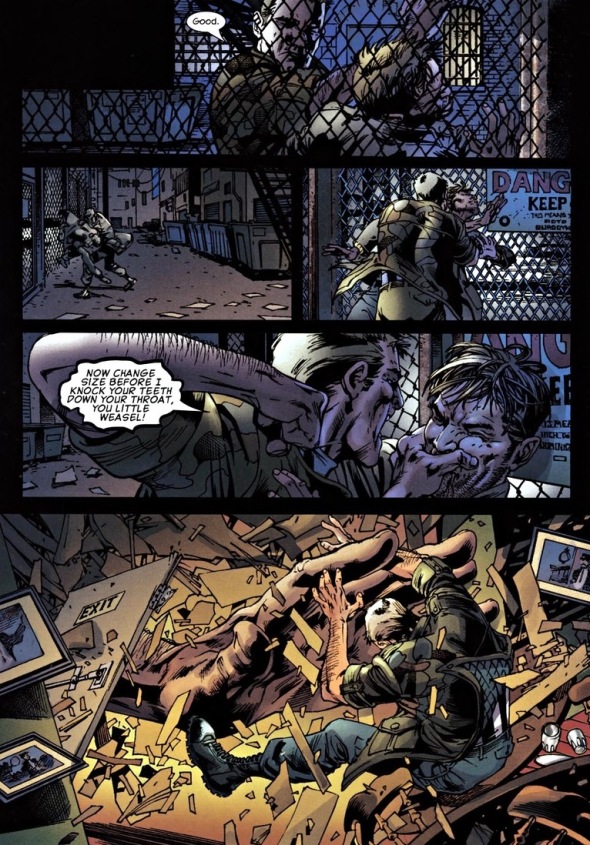 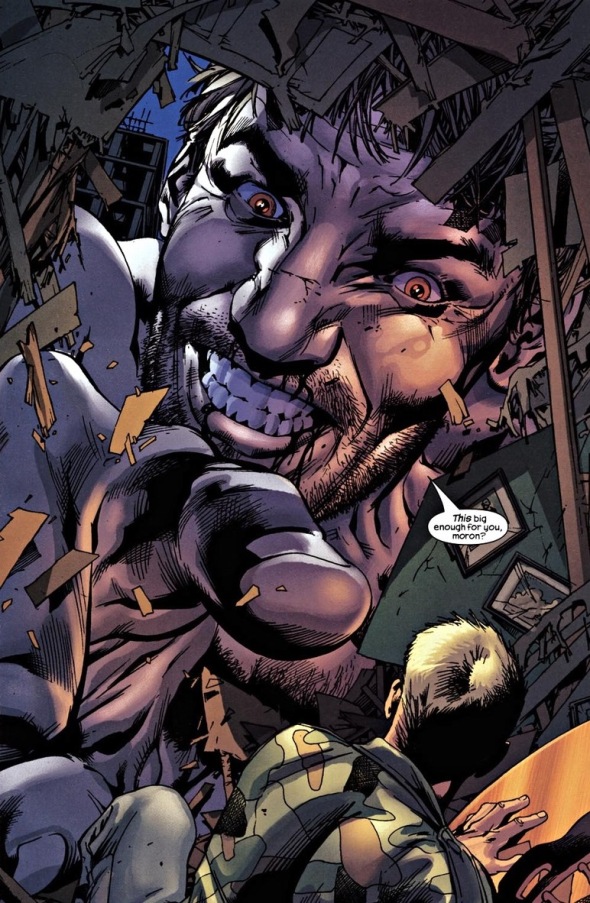 Keep in mind this was Captain America’s goal the whole time.  He picked up a lift with SHIELD so he could jump kick a naked 60-foot man.  A man who could swat the captain across an entire football field with one well-placed slap.  Though now at least it’s a fair fight. 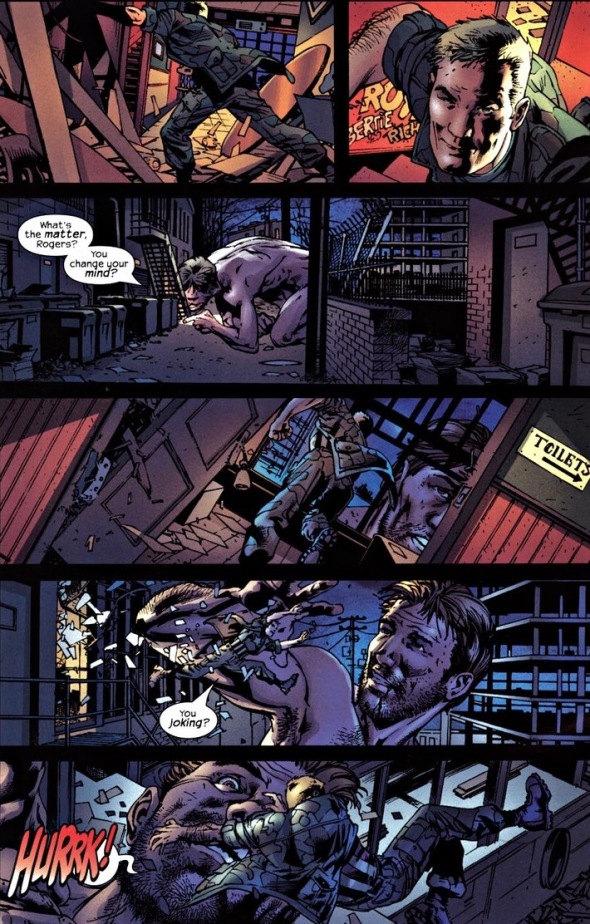 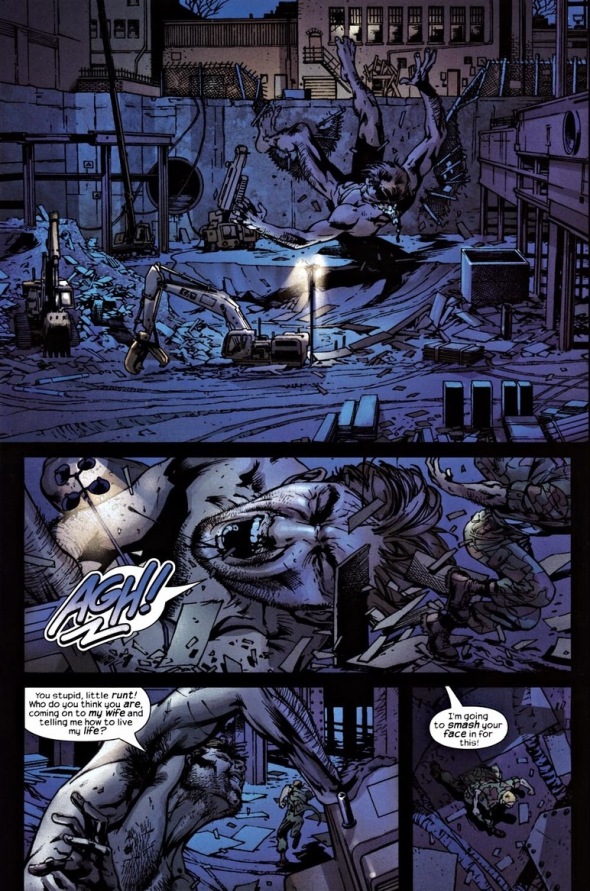 If you haven’t read the first two volumes of Ultimates, you’re missing out.  Every issue plays out like a movie, and as you just saw, a weaponless Captain America scaled a two-story building to ride Giant Man’s nose into a construction site.  Vibranium shields are for wussies.  Oh, and did you see that Giant Man just chucked a bulldozer at Captain America? 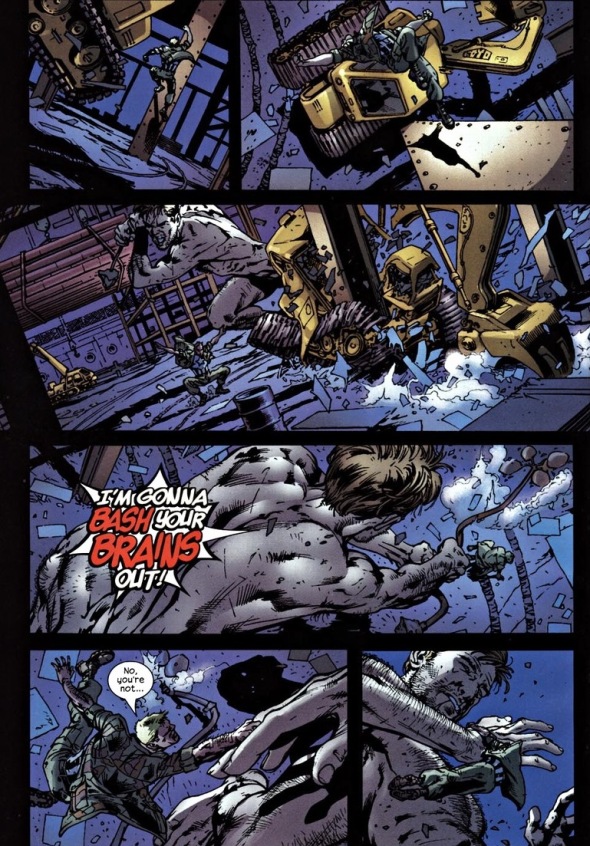 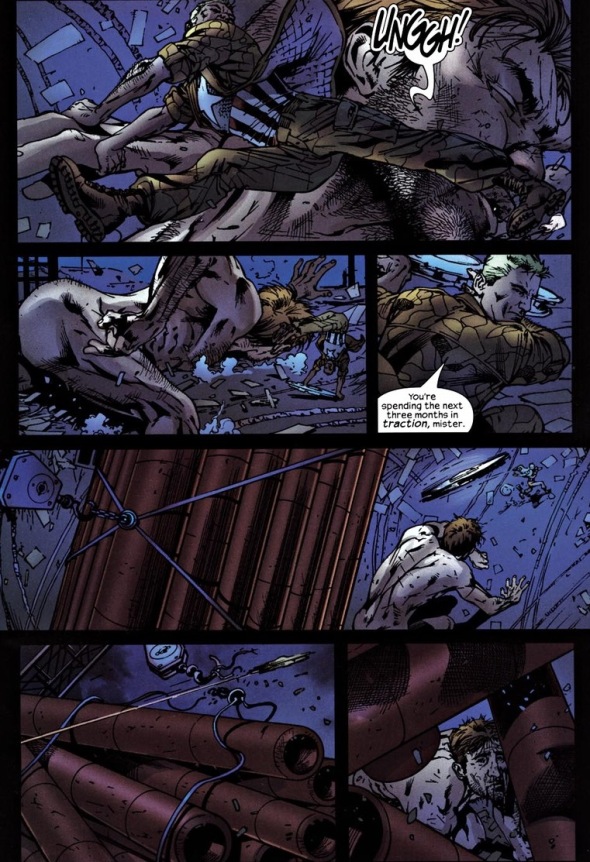 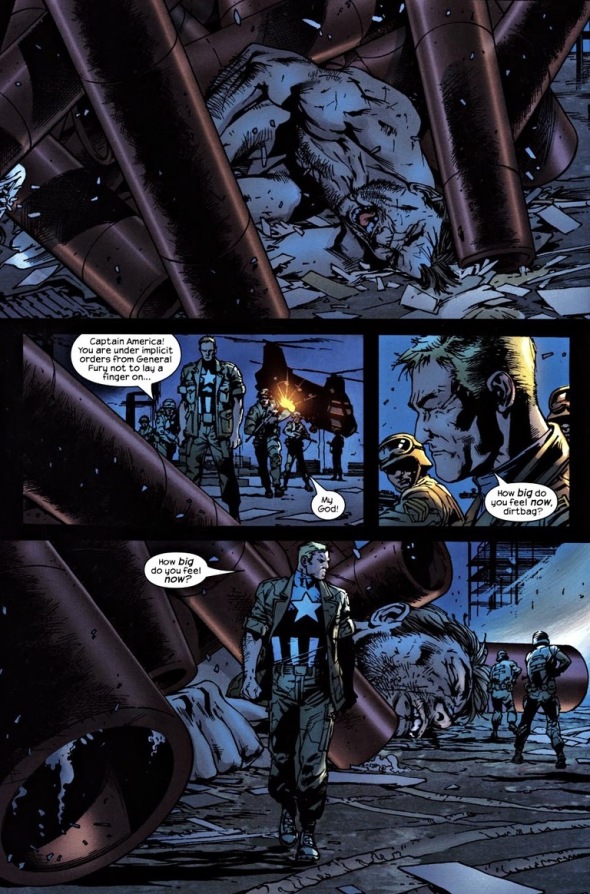 While no problem was solved or lesson was learned, Hank Pym totally deserved it.  Spouse abusers and whatnot.  For more of this delightful Captain America, allow me to self-plug an article I wrote about him here from way back in the early days of the blog.  On Wednesday: Spider-Man!