Unlike every superhero ever, I’m in the beginning stages of a cold so I’m going to just schedule this to premiere at midnight and try to fall asleep before the sun goes down.  I’m just saying Batman could have had his leg blown off the night before and tonight he’d still be dragging himself to the Batmobile while incoherently growling to Alfred, “The Riddler is still out there!”  But our fictional characters exist as the best version of humanity (and aliens), so I figure what better way than to show that with a wildly underrated character (at least to casual fans): Sue Storm Richards, the Invisible Woman.

Sue didn’t gain her force field powers until Fantastic Four #22 and despite being a mother, didn’t change her codename from the Invisible Girl to Invisible Woman until Fantastic Four #284.  But unlike Thing’s super strength, Human Torch’s fire, and Mr. Fantastic’s elasticity, her powers come with a special ability — they’re only restricted by the writer’s imagination.  As you’ll see today, she constantly reminds her enemies exactly why she’s the most powerful member of the Fantastic Four, mainly because magic force bubbles have far more potential uses than self-made arson.

I want to start right off the bat with quite possibly one of the greatest Fantastic Four moments of all time.  Y’see, the supervillain Wizard and his Frightful Four ambushed and kidnapped the Invisible Woman.  In Fantastic Four #549, written by Dwayne McDuffie and drawn by Paul Pelletier, they find out that was a mistake. 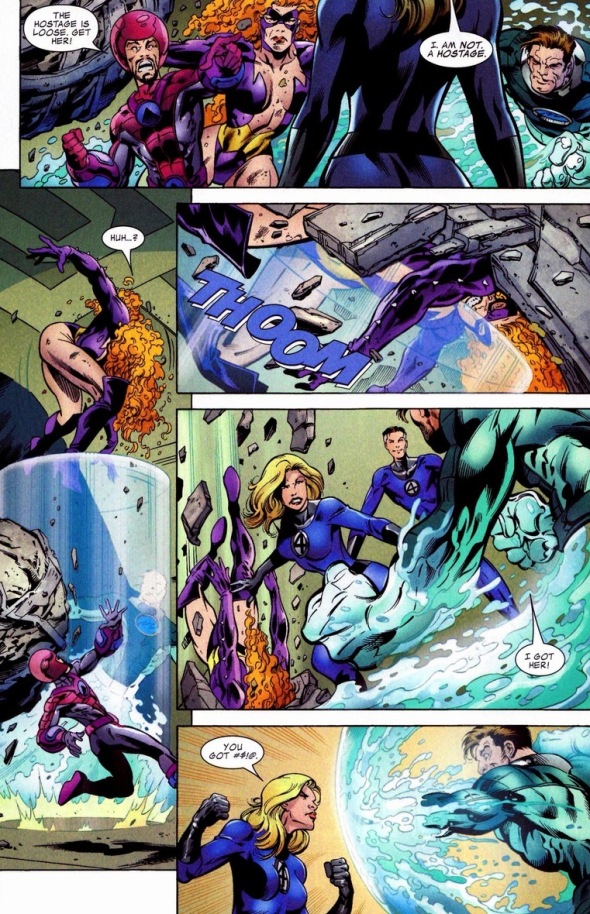 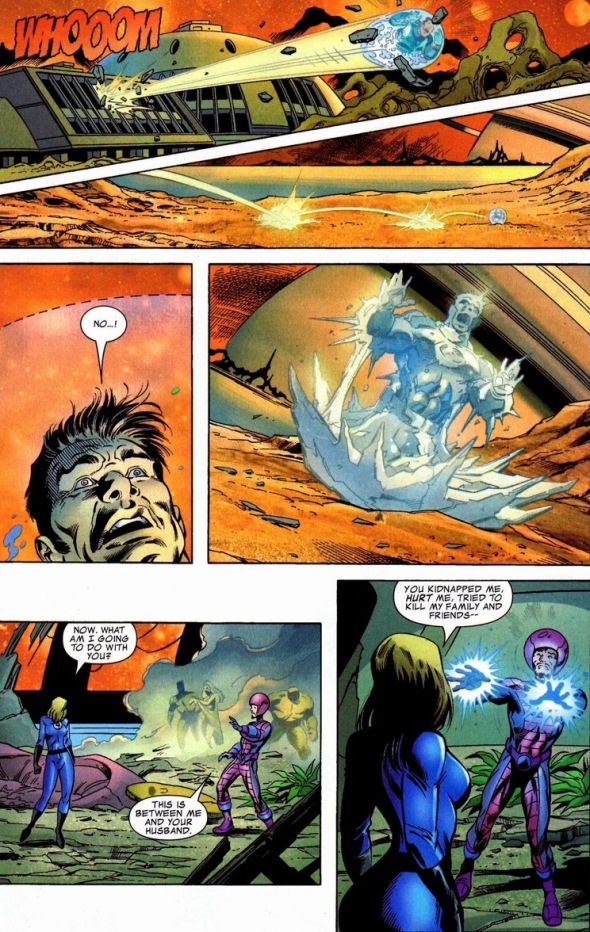 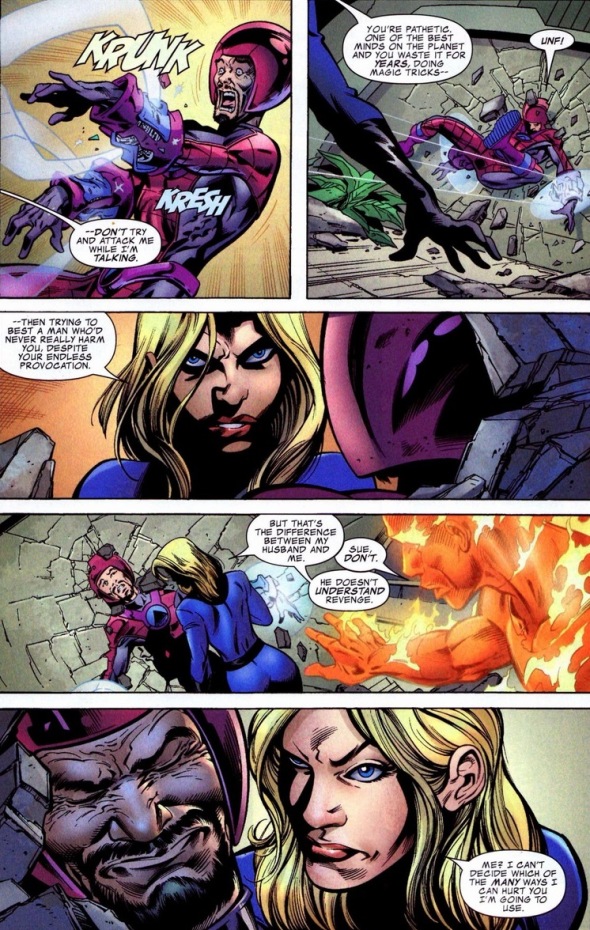 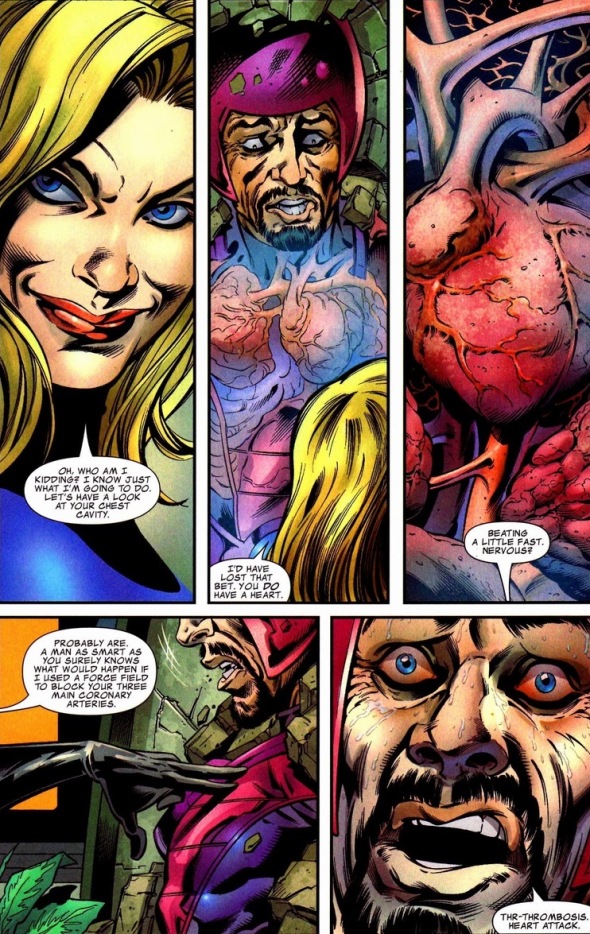 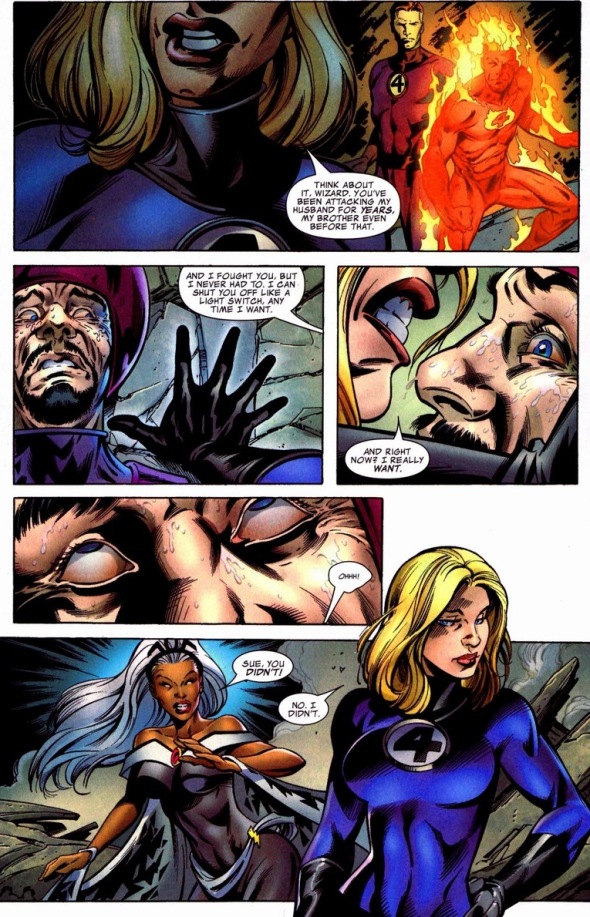 That about sums up the gist of it.  Sue Storm is scary.  Like making grown supervillains wet themselves with just an explanation of what she could do — not even doing it.  In pages I didn’t show you, Mr. Fantastic, Human Torch, Thing, Storm, and Black Panther battled the group all together and still lost.  So while it may have taken the Invisible Woman decades to hit her well-deserved stride, nowadays she may be one of the most powerful female superheroes in Marvel comics today.

Here she goes yelling at the robot Thor that Mr. Fantastic built during the Civil War in Black Panther #25, written by Reginald Hudlin and drawn by Marcus To:

And taking down that jerk Electro in Amazing Spider-Man #660, written by Fred Van Lente & Dan Slott and drawn by Mike McKone: 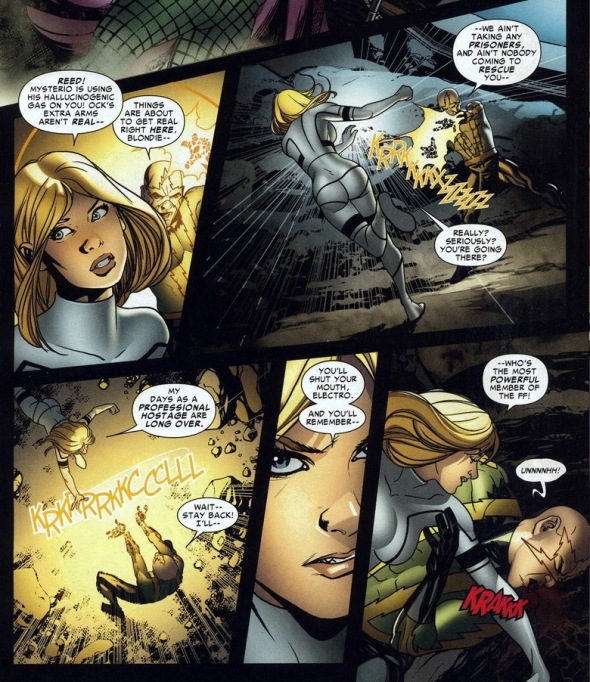 Let’s not forget the time she threatened Namor (the handsomest fish) in Fantastic Four: Season One, written by Roberto Aguirre-Sacasa and drawn by David Marquez: 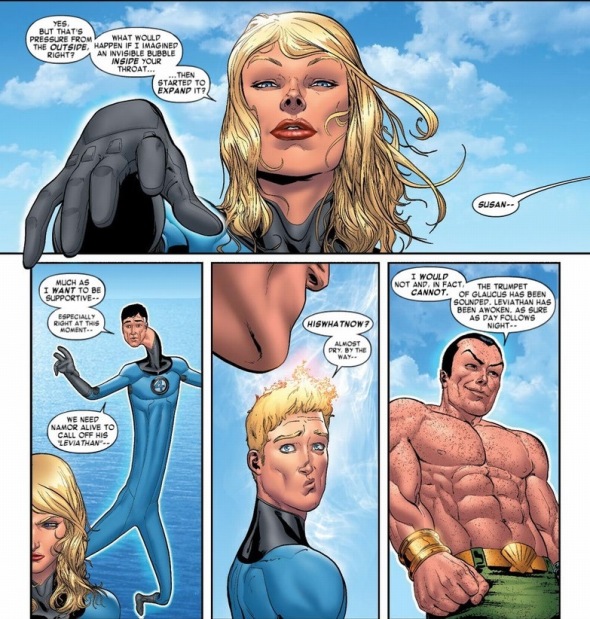 But you know who never underestimates the family matriarch?  Doctor Doom, of course, because along with his scientific genius and accomplished sorcery, he knows the 30-something year-old woman who married his arch-nemesis (gross) can explode him from the inside with a well-timed flip of her wrist.  Though the writers wouldn’t implement that strategy to avoid a two-panel battle with Doom goo splattered all over the rest of the issue.

After Doom lost to the Fantastic Four (and gave Mr. Fantastic a half-melty face), in Fantastic Four #507-508, written by Mark Waid and drawn by Howard Porter, he escaped from his prison dimension with no physical body but something much better: possession magic.  Oh, and SHIELD wants to arrest the Fantastic Four for conquering and unlawfully ruling Latveria.  Long story. 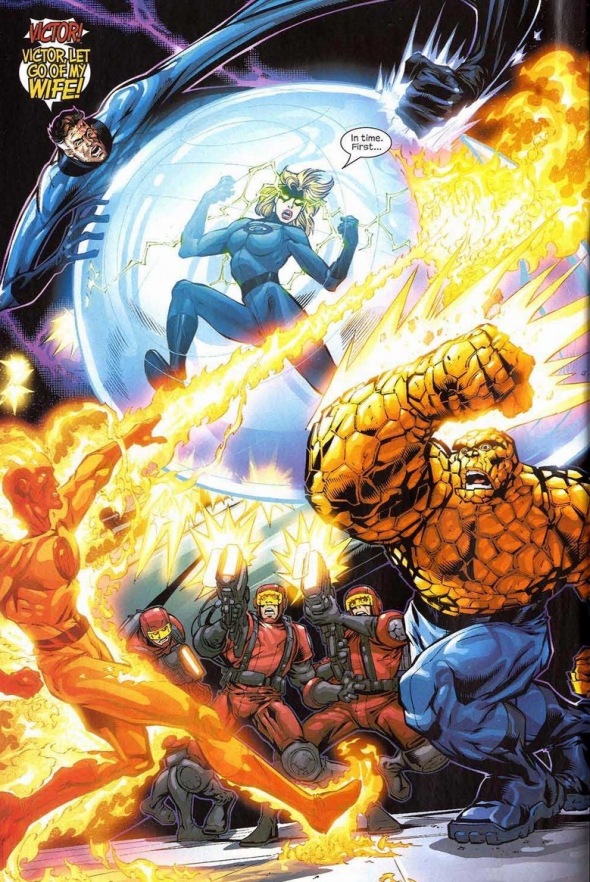 A tactician like Doom now controls the most attractive member of the Fantastic Four (depending on what gender you’re attracted to and the intensity of your rock monster fetish), plus he can utilize all those force fields as weapons beyond blocking kicks and energy blasts.  Even worse, who better to counter how Mr. Fantastic thinks?

Nick Fury’s eye patch is like how Barbara Gordon’s paralysis used to be.  Easily cured by magic or medicine or some other miracle of comic book science, but kept for the symbolism (past mistakes/tragedy).  Look, more than one superhero who lost a limb replaces it with a robotic arm capable of crushing motorcycles, and Marvel can’t give Nick Fury a new eye that can shoot webs or speak Mandarin or anything?  SHIELD has flying cars but Nick Fury still has to look like an angry pirate.  If Batgirl can walk again, surely Nick Fury can regain his depth perception.

Back to our topic, superheroes still lose tons of battles.  It builds suspense and whatnot.  But gorgeous moments arise from those losses like in Fantastic Four #603, written by Jonathan Hickman and drawn by Barry Kitson.  I should admit that I see everything Sue does through majorly biased rose-colored lenses.

And against evil Ben Grimm in Fear Itself: FF one-shot, written by Cullen Bunn and drawn by Tom Grummett: 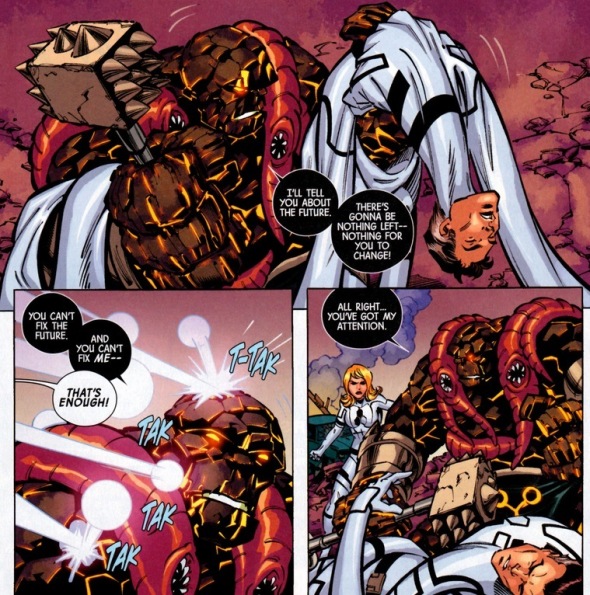 Jonathan Hickman added about two dozen supporting characters to the Fantastic Four and beautifully fleshed out Valeria and Franklin Richards, Mr. and Mrs. Fantastic’s two children.  Valeria has the intelligence of her father with the unfortunate downside of being a five year-old.  She can create the technology to destroy entire civilizations before she finishes a Gogurt, but the poor girl can’t see over the kitchen counter.  Her older brother Franklin has the same reality-warping powers of the Scarlet Witch without the downside of being sexually attracted to robots.  It’s unrelated, but the Richards have raised some amazing children, like this page from Fear Itself #5, written by Matt Fraction & Stuart Immonen and drawn by Wade Von Grawbadger:

We end today (mainly because the NyQuil is starting to kick in) with scenes from FF #2-4, written by Hickman and drawn by Kitson & Steve Epting.  To sum up recent events, a group of several dozen alternative dimension evil Mr. Fantastics are attempting to destroy Earth.  So to solve this problem, our good Mr. Fantastic gathers up a whole collection of supervillains to discuss debate-style possible methods to kill Mr. Fantastics.  It’s a genius idea, and any successful Mr. Fantastic-killing council needs the big baddie himself: our pal Doom.  You know who’s not happy with this?  Everyone. Especially Thing who still hasn’t really gotten over the Human Torch’s death recently. 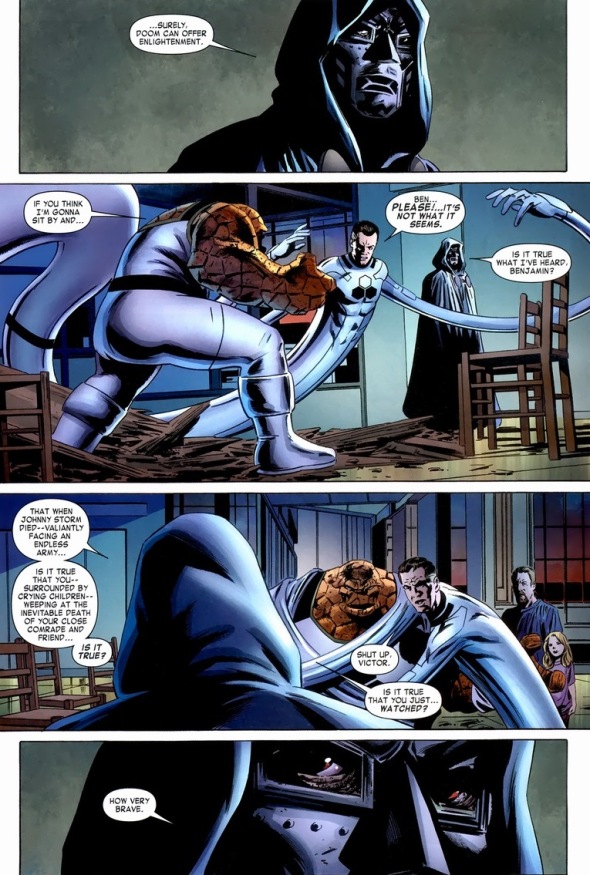 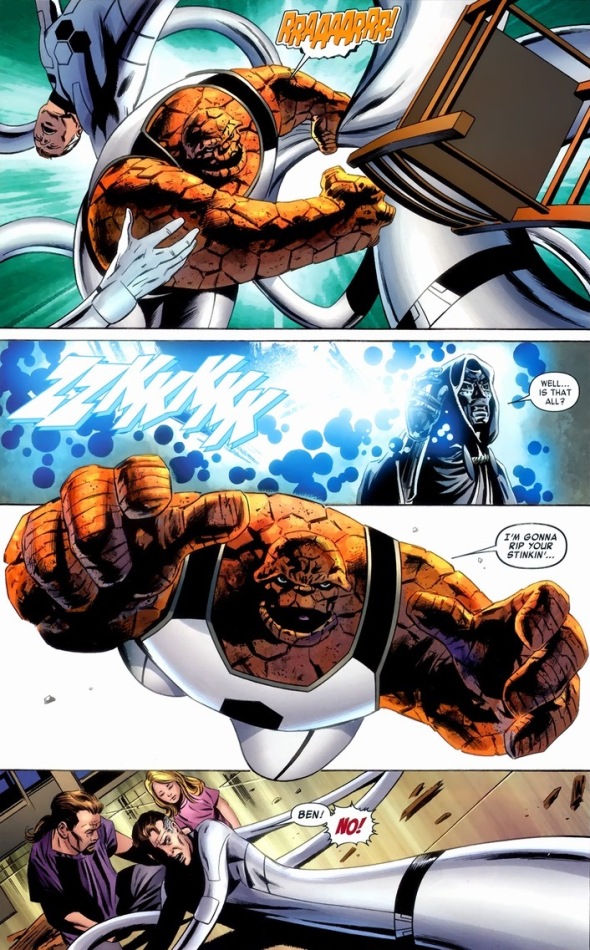 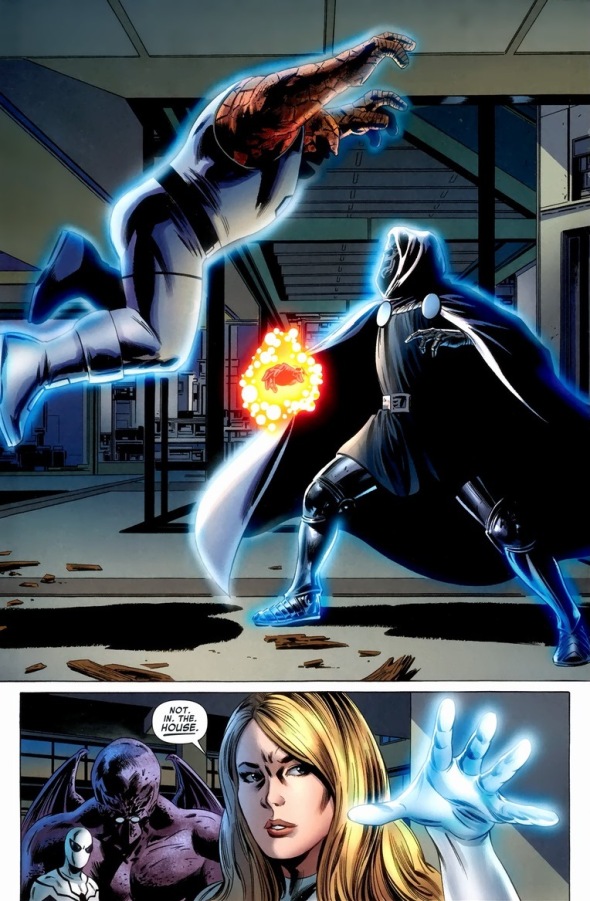 The Invisible Woman won’t take crap from nor be provoked by Doctor Doom.  It’s not because she’s level-headed or emotionally stronger than the Thing.  Nope, because to sum up everything we’ve discussed and read today, Sue asks the question we all know the answer to — who the hell do these supervillains think they’re messing with? 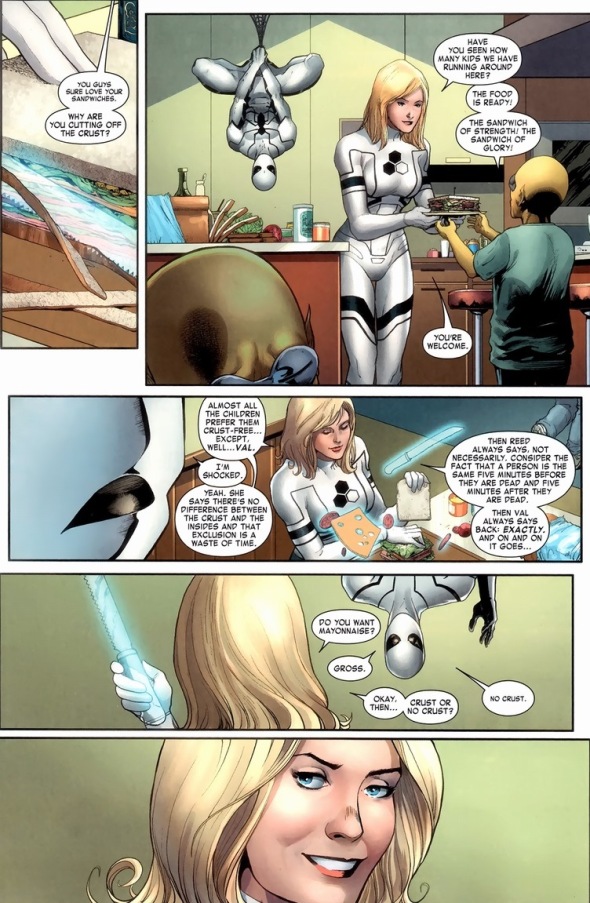 May all young fictional girls grow up to be like the Invisible W0man.  On Friday, we’ll cover a Wolverine story, because there’s no better time to blatantly and shamelessly milk the new X-Men movie for an increase in hits.

8 Comments on “The fantastic Invisible Woman”