You know Invincible, right?  Normally I only cover DC or Marvel (if just because that’s where the entirety of my knowledge lies), but we forget that on the fringe edges of the comic book universe, other superheroes fight baddies in their own fictional worlds as well.  Like Invincible, the teenage Superman-esque superhero created by Robert Kirkman (who you know as the writer of the Walking Dead).  It premiered in 2003, and is still going strong over 100 issues all linking to one coherent and beautiful story (both those statements also apply to the Walking Dead).  But since plot seeds get planted dozens of issues before they sprout, a cast of characters that would take many paragraphs to explain, and twists that break and repair your little heart time and time again, it’s sort of difficult to find a good Invincible story to show you all.  Luckily, my dear friend Mark Johnston pointed out something that I can touch upon — the primal emotional brutality of the fight scenes.  Let’s take a look today at one of those from Invincible #61-65, written by Kirkman and drawn by Ryan Ottley.

Luckily, the beginning of this arc gives us a thorough explanation of the past few issues.  Y’know, the arc where Angstrom Levy sent dozens of evil versions of Invincible to totally wipe out large portions of the population.  One of the joys of a world not attached to DC or Marvel is that ability to destroy it and reshape it as much as the writer wants.  This should take care of any major back story:

There’s Invincible (real name Mark Grayson) sitting bedside next to his girlfriend Atom Eve, who received some injuries during the last battle.  Think of Invincible as a younger Superman-type half-alien superhero — definitely the strongest on his planet, but with a surprisingly more complicated family life than the Man of Steel.  His girlfriend’s a human with pink forcefield powers.  There.  No more beating around the bush, let’s get to the set up.  I really shouldn’t write these things at midnight.

Long story, but think of the Viltrumite people as Kryptonians and this dude as an uglier General Zod flunkie.  Time for some punching, but if you haven’t done so, you should stop here and read the first twelve issues of Invincible.  It’s not as if you won’t understand today, it’s just that the first twelve issues are really, really good. 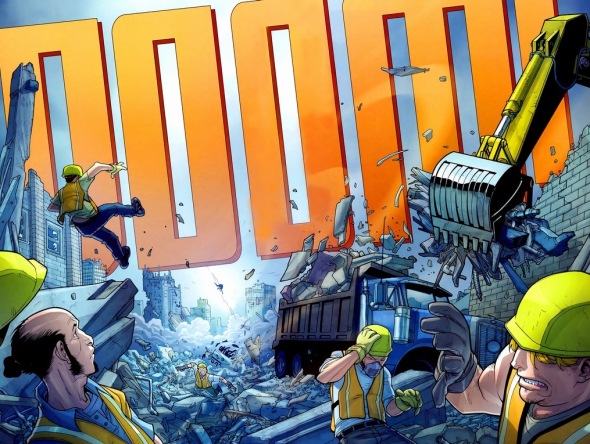 Doesn’t this remind you a little of the Man of Steel movie finale?  In about five images, it won’t, but hasn’t enough time passed that we can admit the movie wasn’t that bad?  A great Superman story? No, not really, but as a standalone action flick?  Totally awesome. 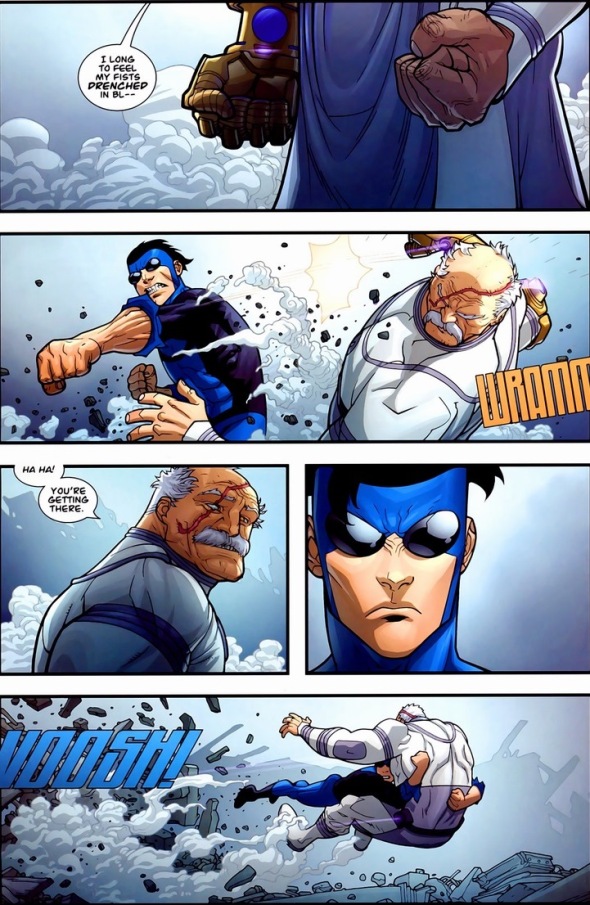 I’m always secretly excited when the bad guys are drawn to be physically imposing.  Conquest (the supervillain’s name) dwarfs Invincible, despite somewhat comparable abilities.  Good.  I don’t think it’s a jock-versus-nerd mentality as much as simply that bigger dudes are scarier dudes.  How frightening would Galactus be if stood only five-foot ten?  That and it would take him way longer to devour the world.  But I promised you brutality.  Blood and gore, right?  Here’s your first taste:

Remember when Superman died fighting Doomsday?  It wasn’t as if his buddies weren’t around, it’s that Superman was the only person on the entire planet who stood a chance of defeating this behemoth.  And trust me on this, because Doomsday’s first six issues or so consist entirely of the monster tearing superheroes in half.  So when Conquest flies down to Earth, Invincible has no choice — he’s legitimately the only one with enough power to take this dude down.  There’s no Kryptonite in the Invincible universe, my friends.

Still, what sort of superhero fight would it be if our protagonist’s loved ones didn’t intervene?  Miracles can happen and whatnot, especially when the world is watching Grayson getting his face caved in. 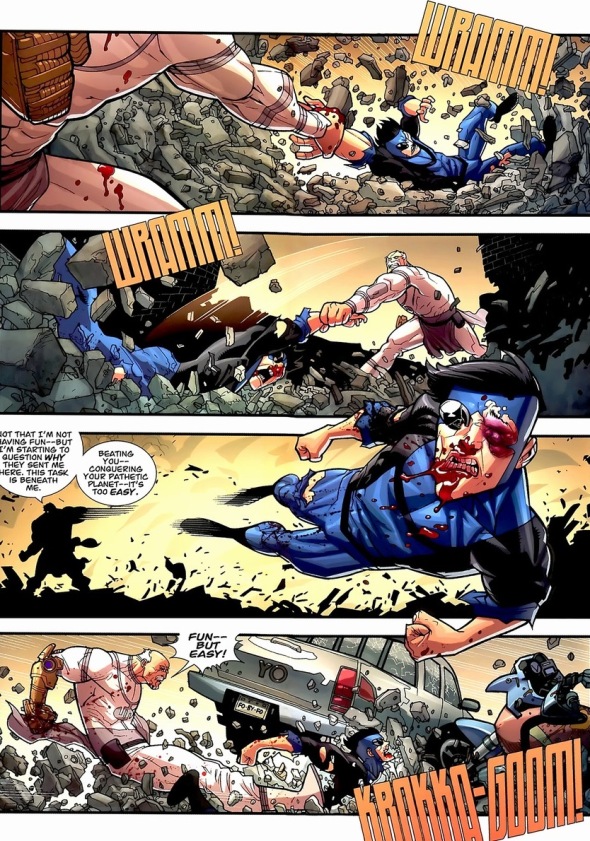 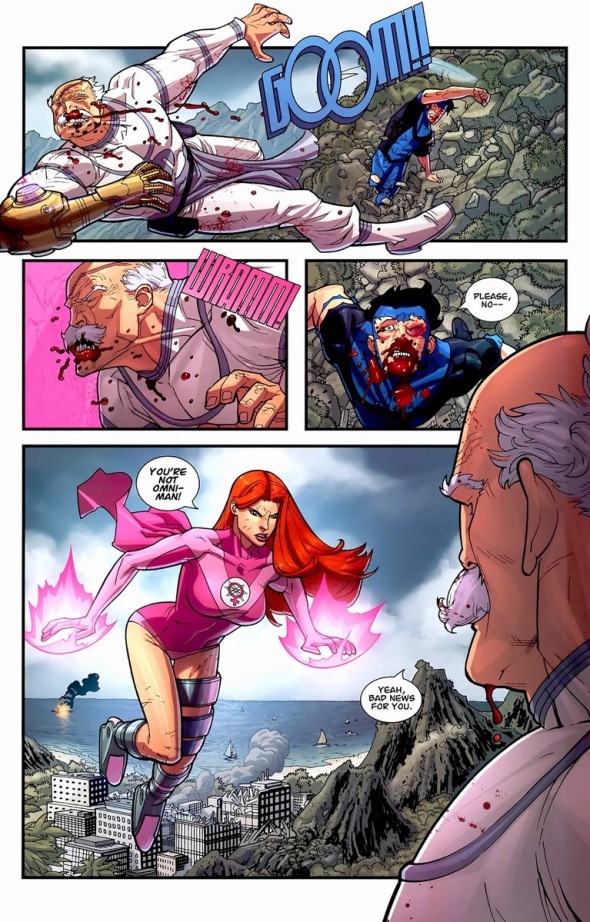 Time for our hero’s lady to save the day!  She’s a superhero too, gosh darn it, and deserves a piece of action just as much as the Grayson does.  If Invincible and Conquest equally match each other’s strength (maybe Conquest a tad higher), the best plan would be to throw a wrench in the fistfight with some other type of cool superpowers.  Let’s watch.  Remember, even godlike Superman sometimes needs to be saved by the human Batman (though Invincible and Atom Eve tend to make out a bit more than Superman and Batman).

By the way, if Superman decided not to hold back, that’s exactly how his fight against Batman would go.  You can imagine Invincible’s response to Conquest shoving his arm through his girlfriend’s body.

Listen, Atom Eve isn’t dead.  She doesn’t die here.  But Jason, you say, isn’t that a huge spoiler that ruins almost all the suspense of the story?  Kind of.  But she lives, and I’ll tell you why it’s important you know that: if you want to go back and read the series Invincible, you’d start at the first issue.  But I’m showing you sixty three issues down the line — that means every time you see Atom Eve, her relationship with Invincible, and all the phenomenal build-up, that gnawing little thought burrowed in the back of your brain tells you that she’s going to die.  Why get too attached then?  It’s a spoiler that ruins the experience, so she totally lives.  I promise.

Unfortunately, I’m not giving you the end of the story — go buy the book for that.  Here’s a taste:

I love this series, and I get just as excited each month about this as my Marvel/DC comics.

Have a great weekend, you deserve it.

6 Comments on “Invincible vs. Conquest”