About four years ago, I remember watching Saturday Night Live discuss one of President Obama’s triumphant debates over the Republicans.  I forgot the context and the reason, but Seth Meyers made this joke:

Come on, Republicans … you thought you could take down Barack Obama by debating him?  You realize debates are why he’s President, right?  Seriously, all you guys do is complain how Obama is “all talk,” and then you invite him to a forum that is literally all talk. That’s like saying, “Let’s see how tough Aquaman is when we get him in the water.”

Y’see, each of the DC superheroes has their strengths and weaknesses — some physical, other personality — but those downsides are what make the characters so interesting.  And Aquaman?  So maybe he’s not so great to plop down in the Middle East, but may the DC gods and goddesses help whoever decides to challenge him in the ocean.  The supervillain Eel learns this lesson the hard way today in Aquaman #21-22, volume six, written by Will Pfeifer and drawn by Patrick Gleason.

So currently, Aquaman patrols the city known as Sub Diego.  It’s part of San Diego when an earthquake submerged half of it and all of a sudden its inhabitants could breathe in water and no longer breathe air on the surface.  You can read an old article I wrote on it for more details.  But much like all other great DC cities, the mobsters, criminals, and supervillains still make their home there — even if they now live underwater.  Time for Aquaman to show these baddies who they’re dealing with (spoiler alert: Aquaman).

I’m not saying that a killer whale makes for a better sidekick than, say, Robin, but Hollywood did make four Free Willy movies.  So let’s consider Sub Diego simply a wetter Gotham City.  They even have their very own criminal mastermind, out to take control of the city’s underworld (though isn’t everything sort of considered the underworld now?).  Meet Eel (real name Mortimer Coolidge), a telekinetic so insignificant that he only appears in six issues total.  Three of those are alternative reality Flashpoint issues, so they don’t even count towards canon.  But despite his lousy future, he’s still full of delightful supervillainy ambition.

When Aquaman has to face the new head of Sub Diego’s mafia — an experience he probably didn’t have to face often in Atlantis — who does he turn to?  Who in the DC universe has fought mobsters more times than Superman’s saved Lois?  And it’s a bunch, because she falls out of a lot of buildings. Aquaman turns to the only other humorless member of the Justice League who, unlike Aquaman, cannot ride his sidekick. 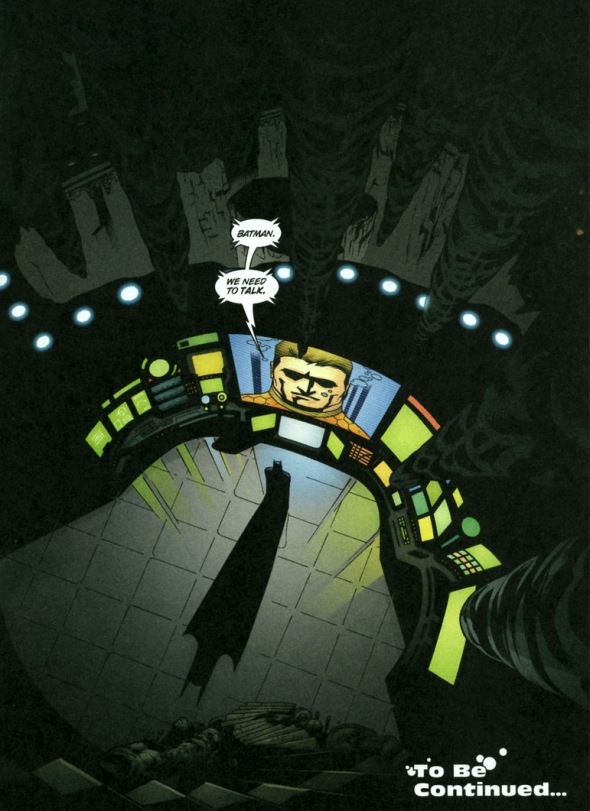 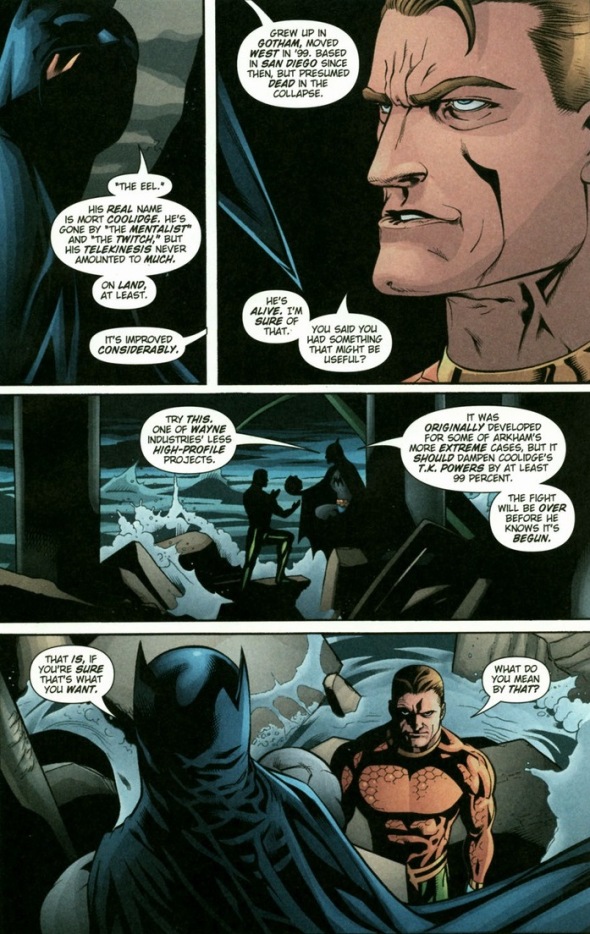 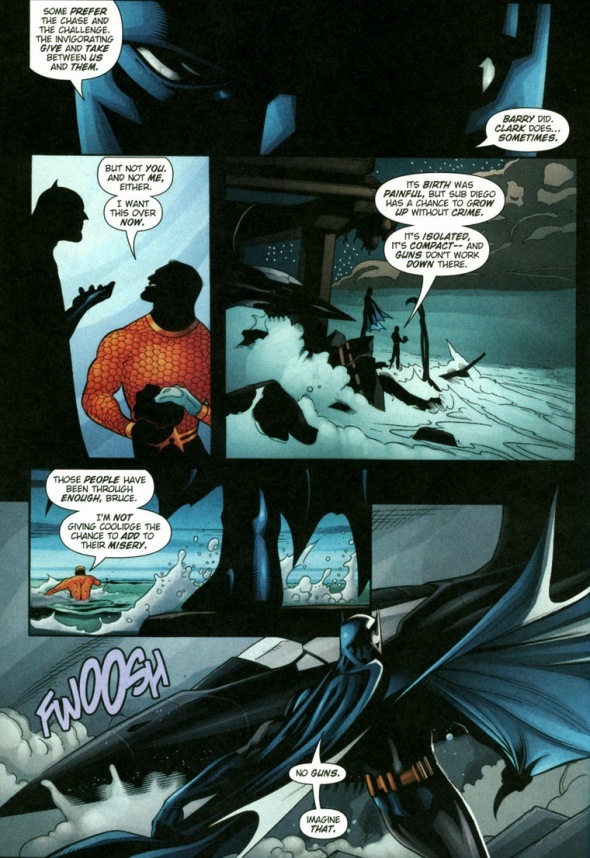 Can we take a moment and appreciate the cool upwards angle of the Batcave in that first picture?  But let’s talk about Batman’s comment (and ignore him handing Aquaman a deus ex machina) before we continue.  I kinda do think Batman enjoys the “chase,” but that’s only because his entire self revolves around fighting bad guys.  Batman can’t exist in a world without crime, and his claim does apply to most of the Justice League as well.  Hal Jordan lives for the “chase.”  So does Wonder Woman. Green Arrow needs it.  Definitely Nightwing.  Probably not Martian Manhunter, but he has other major issues to deal with.  It’s hard to be a superhero and not enjoy the adrenaline rush that goes with it. Either way, time for Eel to realize the folly of his ways.  Water plus Aquaman equals this: 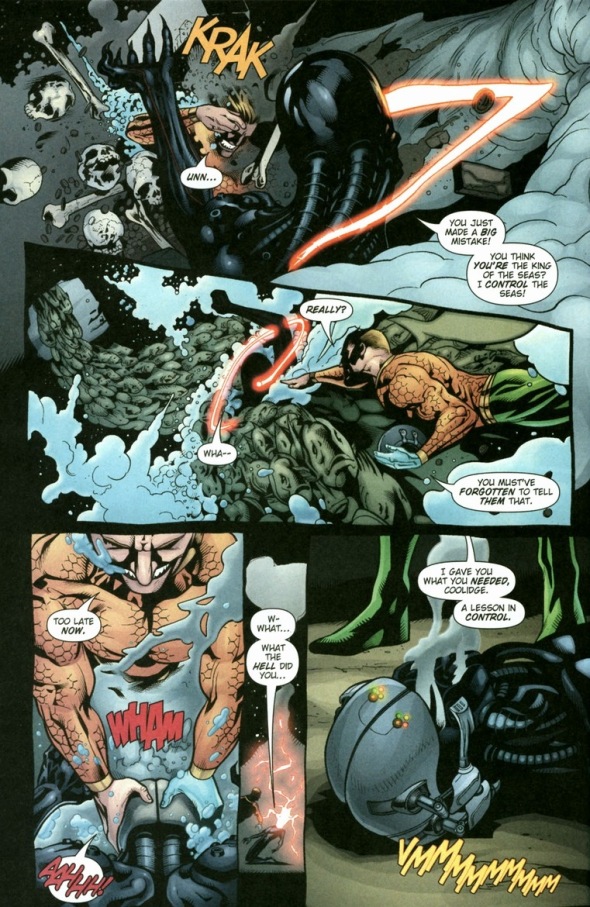 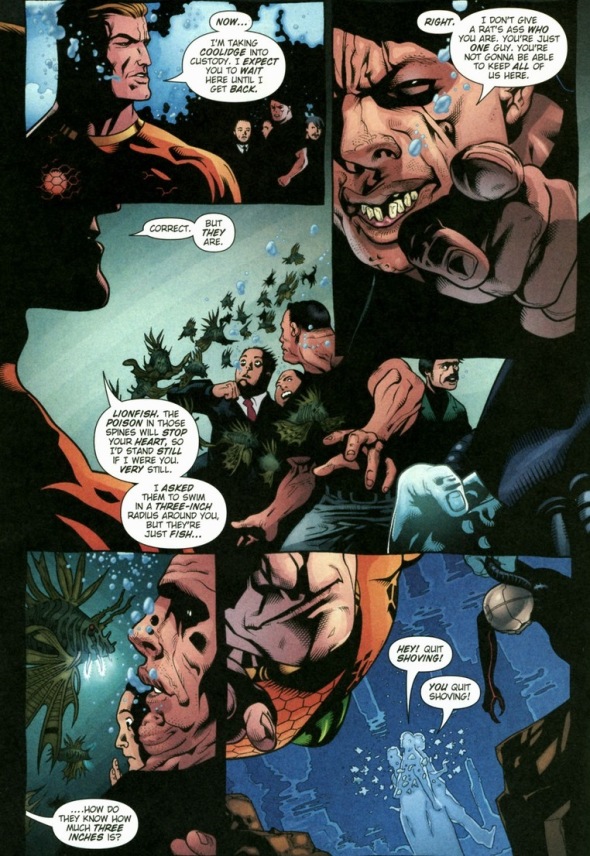 Eel’s telekinesis only works around water, but when the local superhero bursts through walls like a fishy Kool-Aid man, what chance does Eel possible have?  On that note, our dear Aquaman makes the mistake all good superheroes do once in a while: he underestimates his opponent.  Mainly because what type of fight would this be if it’s over in a single page? 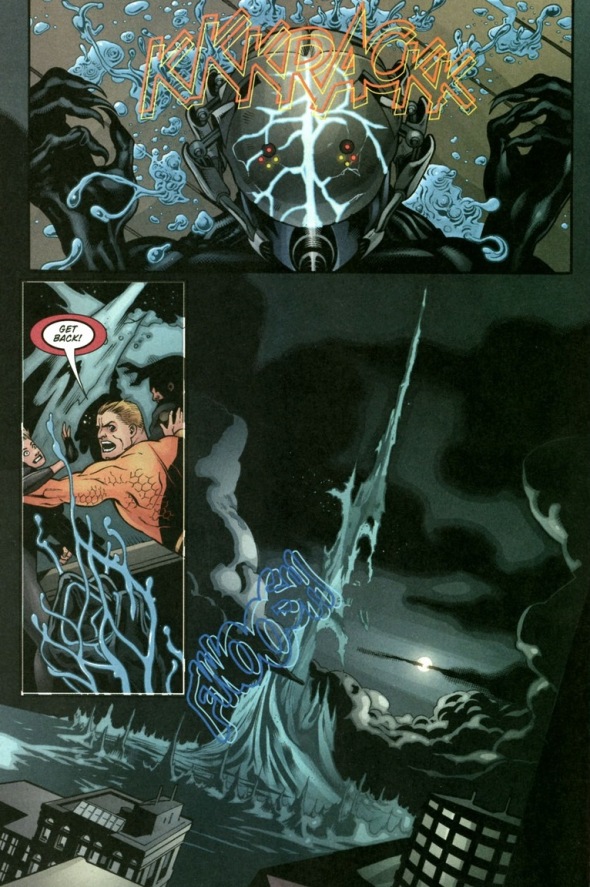 Round two, my friends.  Despite Coolidge’s second wind, his opponent wildly outclasses him.  Since I already shamelessly plugged another one of my articles earlier, have you read the article I wrote on mismatched superhero battles?  I should tell you that my self-esteem relies entirely on my blog’s hit count.  Oh yeah, and Aquaman pounds on Eel. 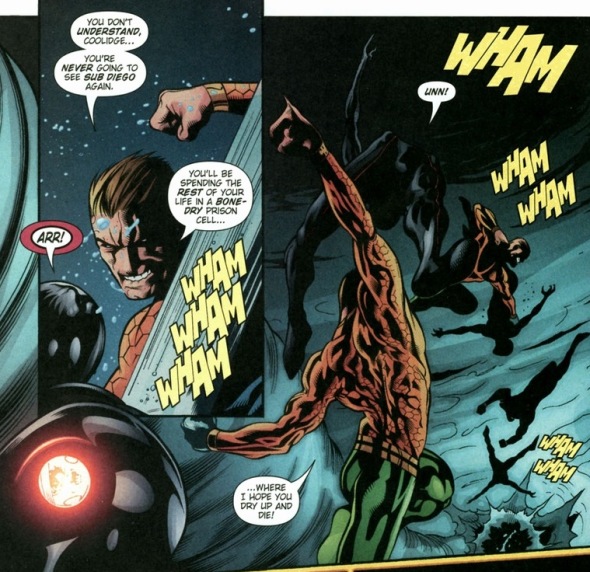 Look, all these other pages still likely hasn’t convinced you of Aquaman’s water superiority.  It’s just a normal fistfight at this point.  But y’see, Aquaman can’t lose.  Like he had the fight wrapped up from the moment Eel dropped into the water way back in Sub Diego’s origins.  We’re in Aquaman’s house, and his house is disgusting. 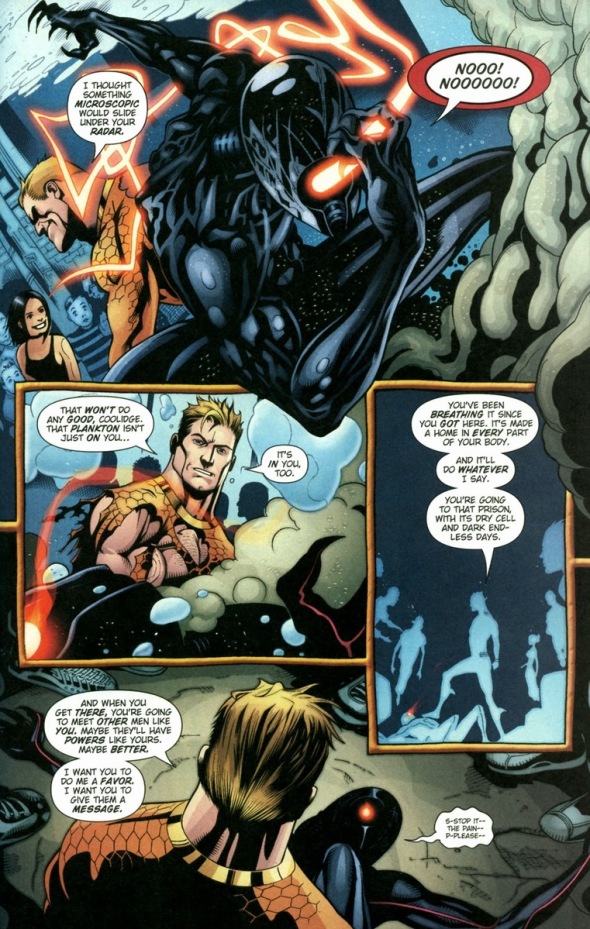