← Cammi and the Avengers Arena
Cammi and Drax in space, Pt. 1 →

Cammi and Drax in space, Pt. 2

Our current favorite duo — Drax the Destroyer, an alien/human hybrid with unbeatable fighting skills, and Cammi, a 10 year-old with both above average intelligence and moral skepticism — get to fight in the Annihilation Wave war.  For those not in the know, Annihilus, the bug ruler of the Negative Zone bug dimension decides to conquer the galaxy with his bug army and whatever else Thanos gives him. It goes badly for our heroes.  But Nova Richard Rider leads the defense with the help of superheroes/villains such as Drax, Gamora, Star-Lord, Ronan the Accuser, Firelord, Red Shift, Stardust, and other minor characters I’ve never heard of.

Note: this all takes place before the Guardians of the Galaxy officially forms (the Star-Lord version of it anyway).  Another note: the Guardians of the Galaxy you loved so much in the theater this weekend formed in 2008.  This team has only been running around the universe for six years, so don’t feel bad if you haven’t heard of them.  Oh yeah, and Cammi and Drax and stuff.  But first, war! 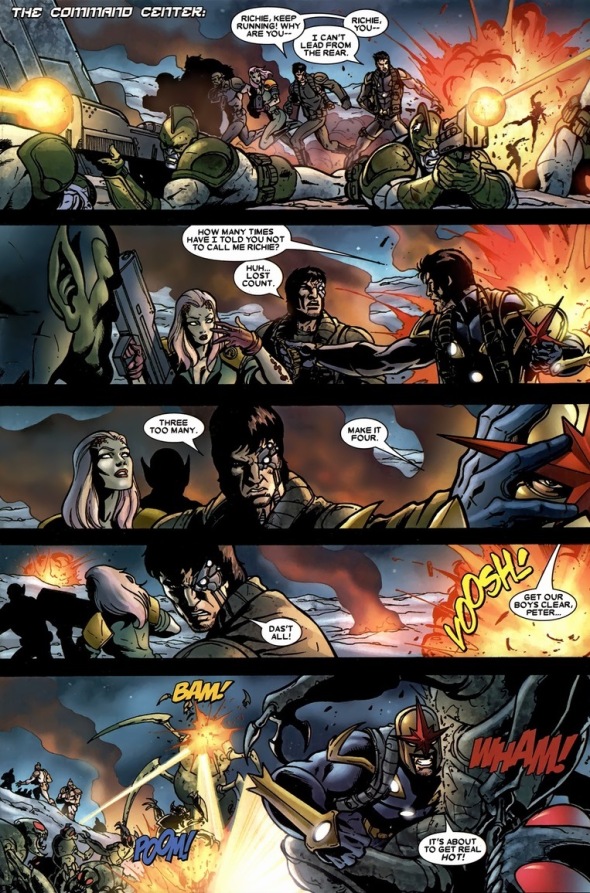 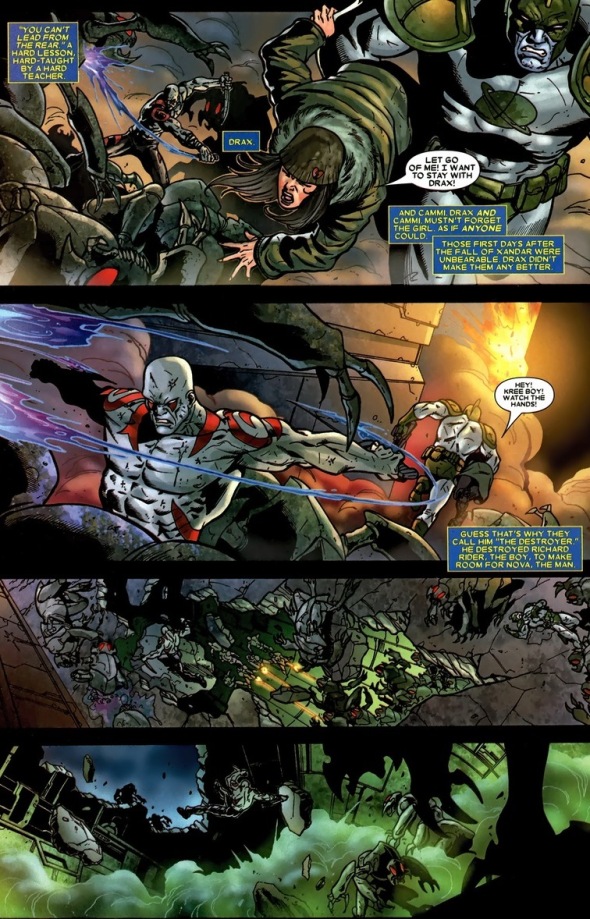 See Star-Lord?  He’s the cyborg with the robot eye.  He’s been through some tough times.  Anyway, like all good war literature, the vicious battle must be spread throughout moments of quiet reflection. The soldiers calmly eat and hang out in the makeshift camps before dawn breaks and the next battle begins.  I like to think of Cammi and Drax as friends and confidants, but both are so emotionally damaged that I think the push/pull relationship between the two is the closest they’ll get. 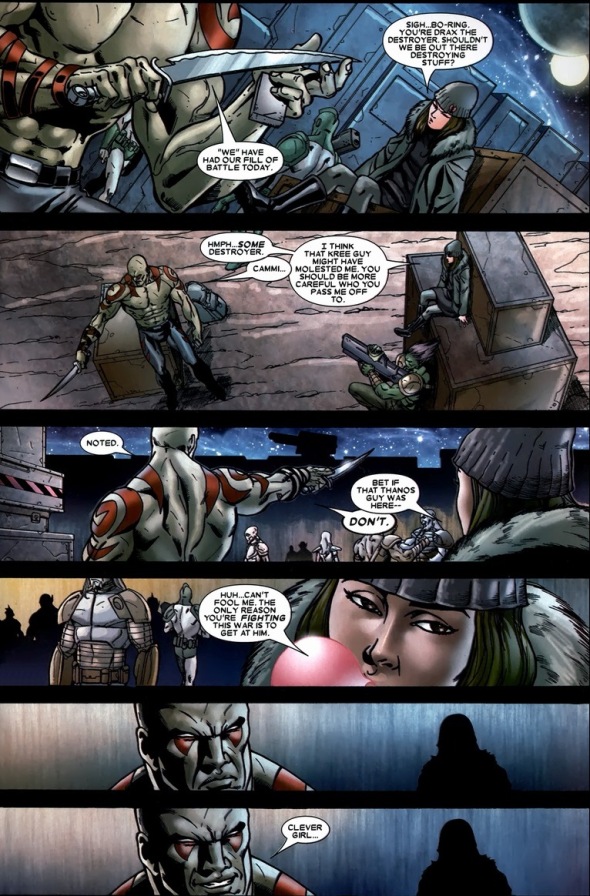 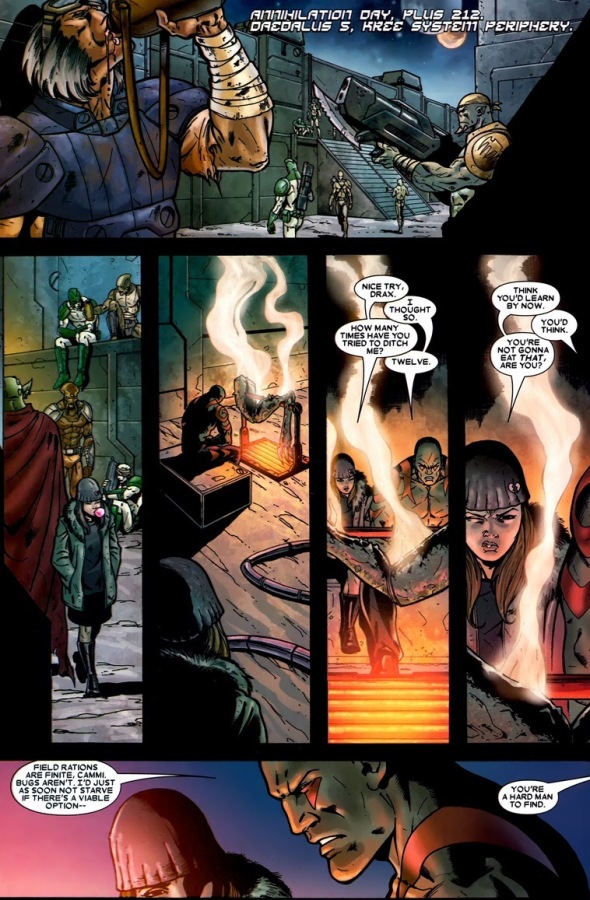 So why does Drax keep an eye on Cammi?  She’s resourceful, but totally useless in a fight.  Most likely, it comes down to Moondragon, Drax’s daughter.  Surprise: Drax isn’t a terribly good parent. Superheroes tend not to be (Batman, Wolverine, Cyclops, Hulk, Catwoman, etc.) with the whole lifestyle of fighting crime against dozens of psychopathic killers.   But like what Wolverine does with young X-Men girls, Cammi can give Drax a second chance to feel those feelings again and whatnot. Protect a child to make up for not protecting his own daughter.  Which brings me to this plot twist: 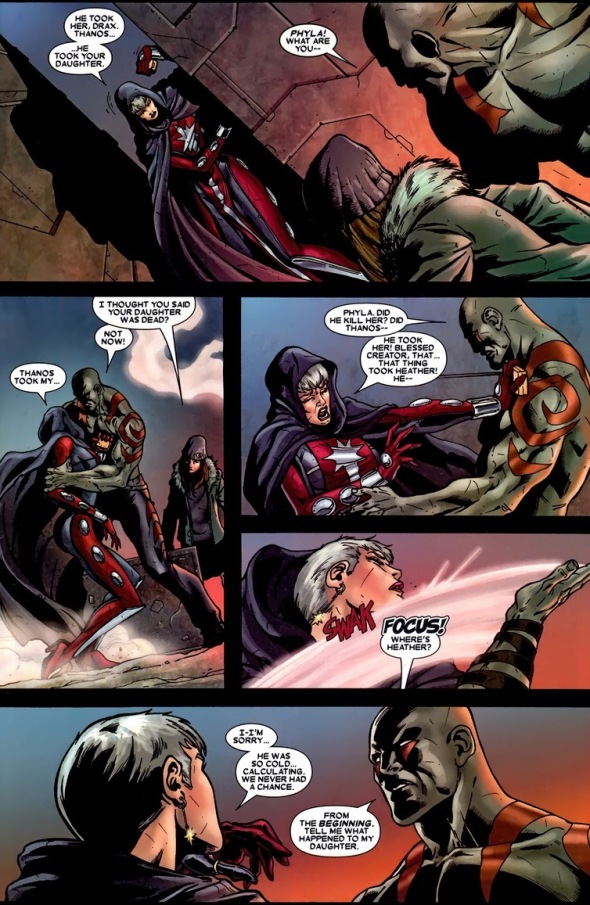 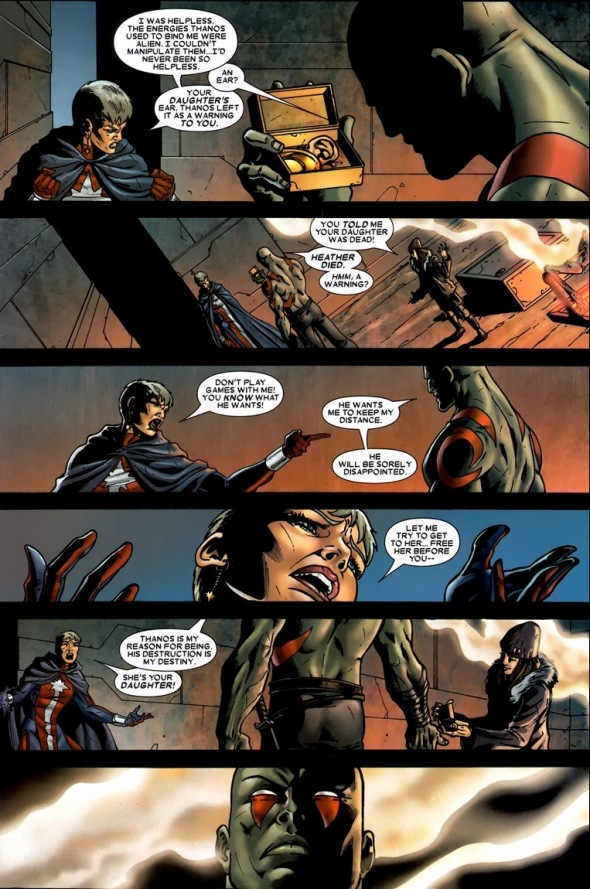 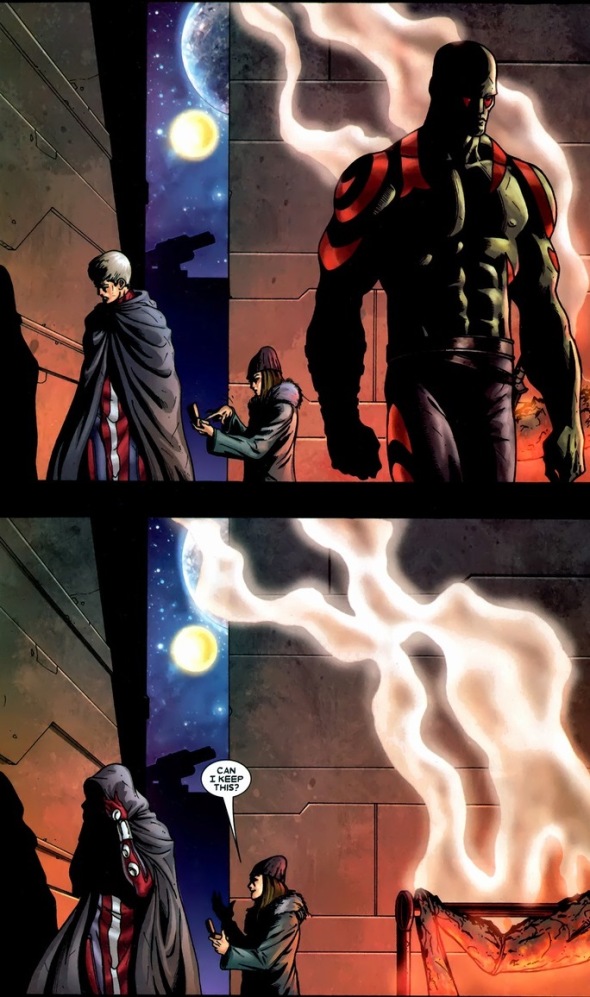 Okay, so maybe Drax isn’t Wolverine.  If the Destroyer has to choose between keeping his daughter alive and killing Thanos, the big purple guy drops dead every time.  And Cammi now has an ear to add to her collection of morbid alien mementos.  Moondragon’s capture means the end of Cammi and Drax’s friendship.  I mean, they’ll still stay buddies and all, but it’ll have to be long distance. Remember what Cammi figured out earlier: Drax isn’t fighting to save the galaxy from Annihilus, he’s using the army to get close to Thanos.  And so I present to you, the last time our two ever see each other.  Ever.  It’s amazing, and make sure you read Nova’s commentary. 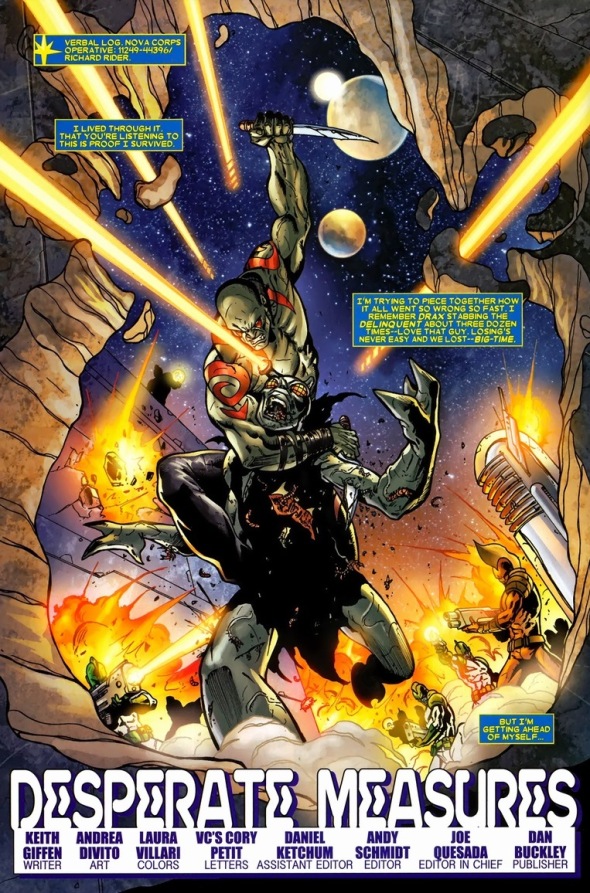 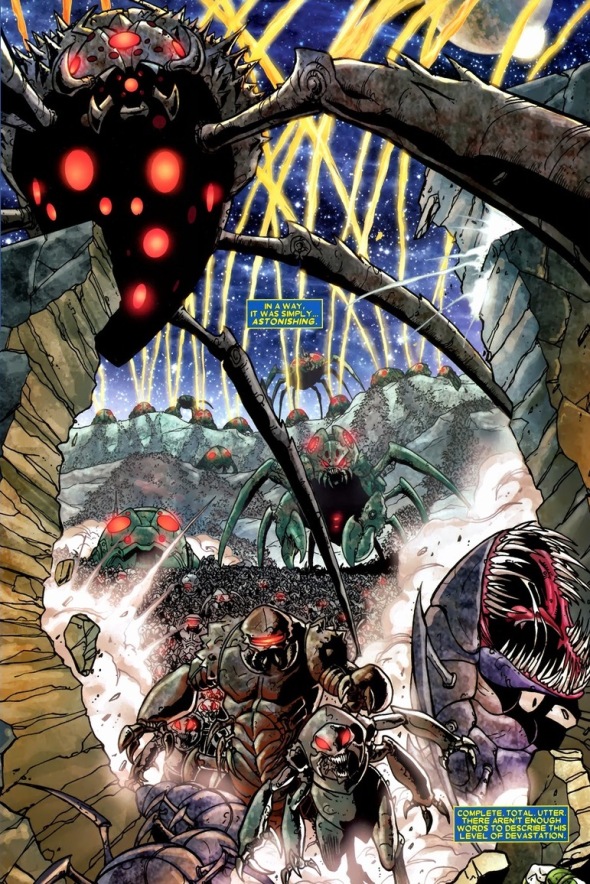 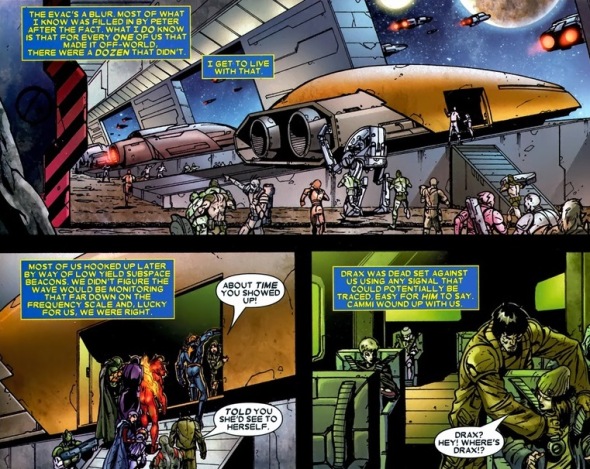 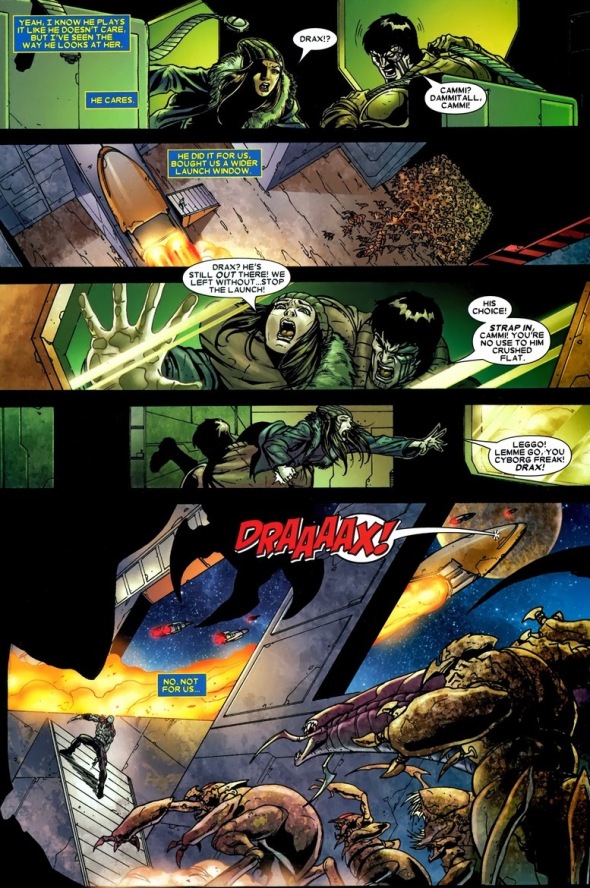 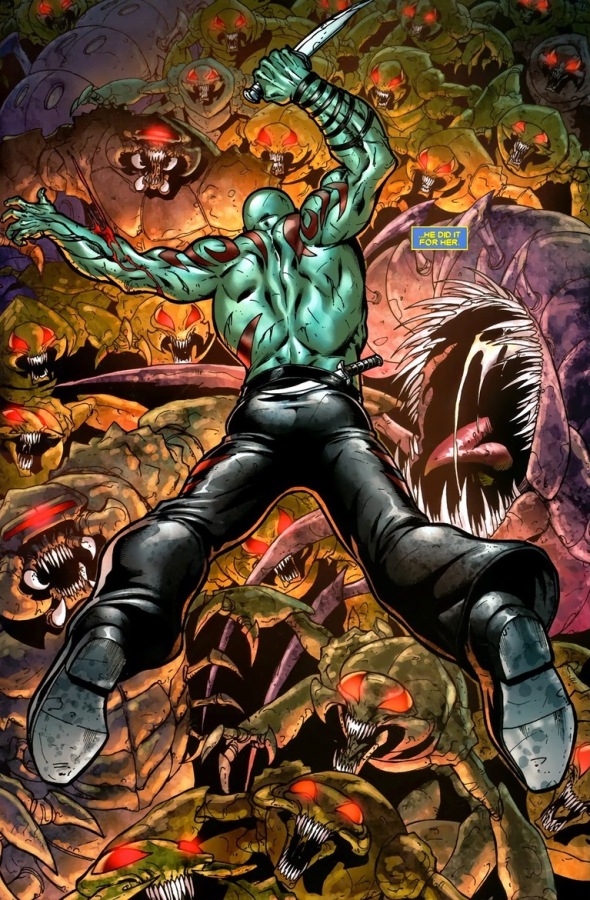 So begins the battle of Drax versus hundreds of thousands of Annihilation Wave bugs.  Armed only with a pair of knives and abs too glamorous to hide behind a shirt, our hero selflessly sacrifices himself to protect Cammi, Nova and all his other friends.  That’s just what superheroes have to do, being selfless and sacrificing themselves and fighting the entire enemy force all by their lonesome. Y’know, except not. 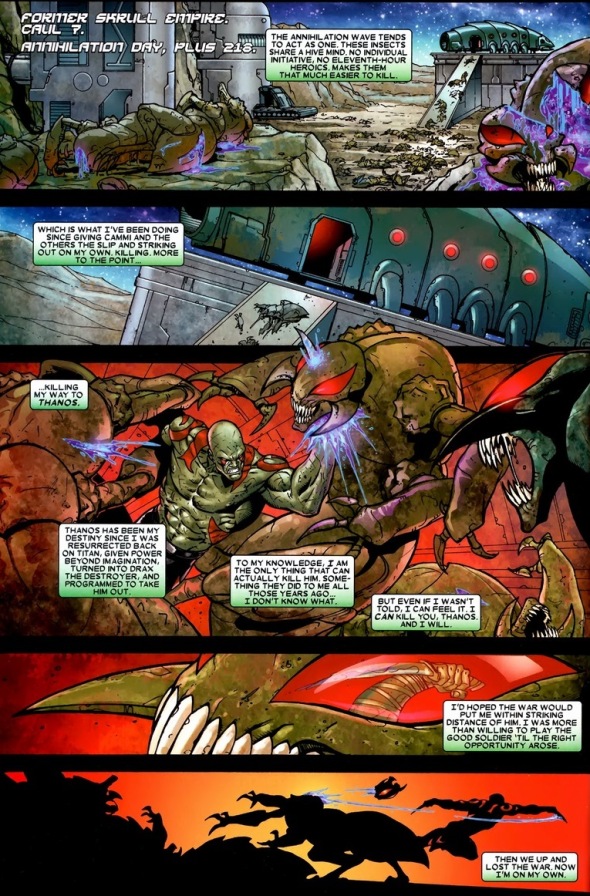 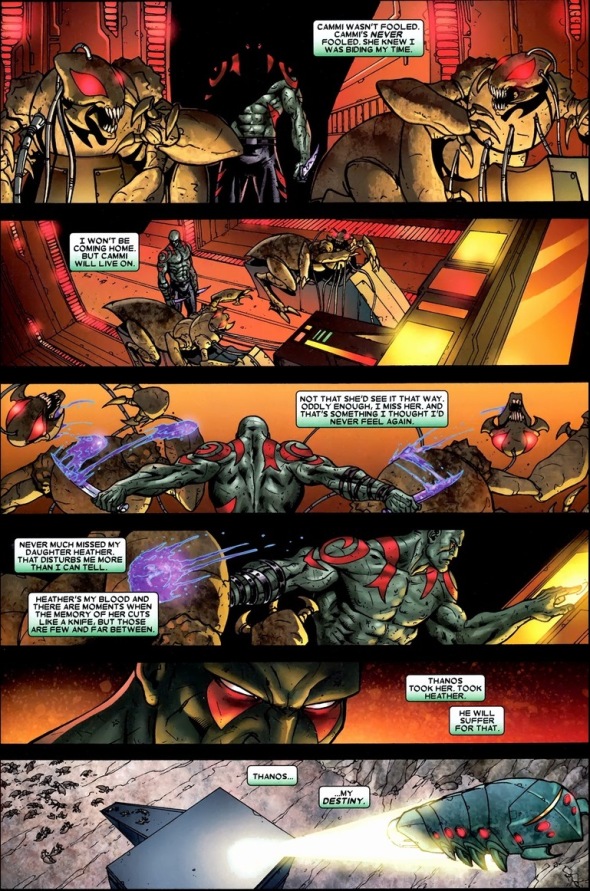 Drax’s character developed by not developing at all.  He won, for one, which alone deserves a standing slow clap.  But like Cammi predicted and Nova got terribly wrong, Drax only stayed behind to break off from the military and sneak into Thanos’ ship.  No sacrifice, no selflessness, but totally fighting the entire bug army himself.

The war continues, but Cammi takes a backseat, as you can imagine from her inability to fight. But don’t worry, as she continues to be a pain in the butt for as long as the others can handle her.  She has a reputation to keep up. 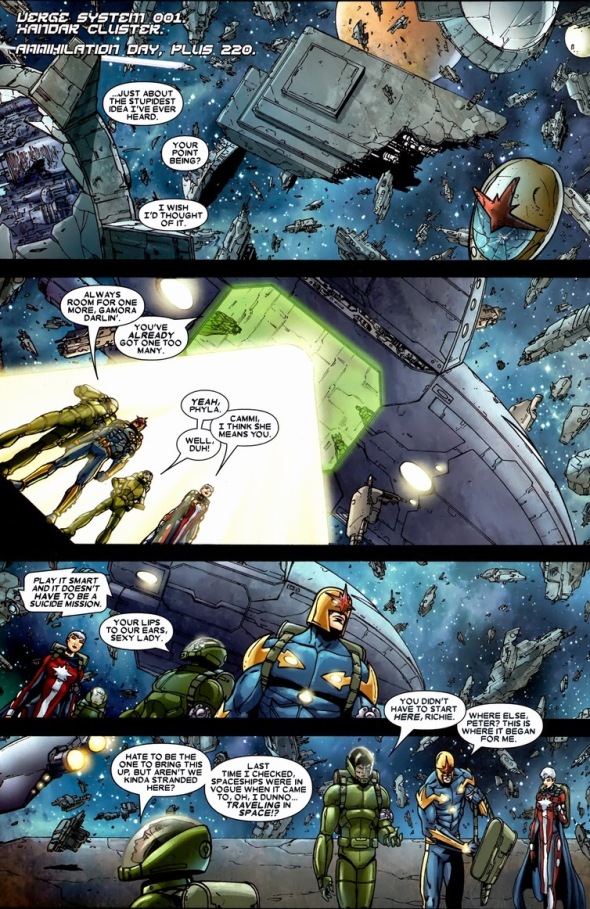 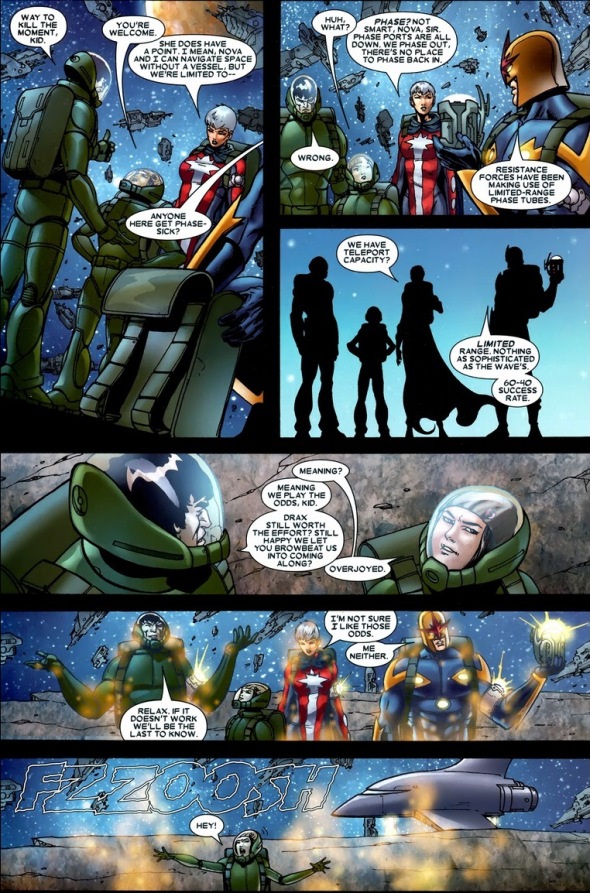 I won’t spoil any of the last two and a half issues of the Annihilation series for you, but I will provide you with a bunch of teasers to make you angry you don’t own this comic yet.  Also, have you noticed just how grander the stakes are in outer space?  Sure, one of the burroughs of New York might be wiped out if the Avengers don’t hit Kang the Conquerer with a hammer enough times, but if our cosmic superheroes fail, the galaxy blows up.  Things get exciting. 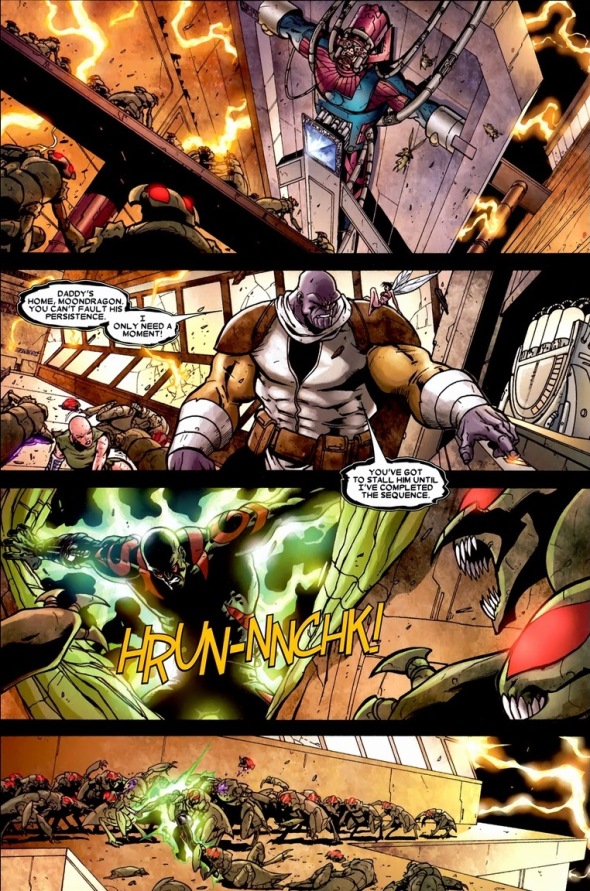 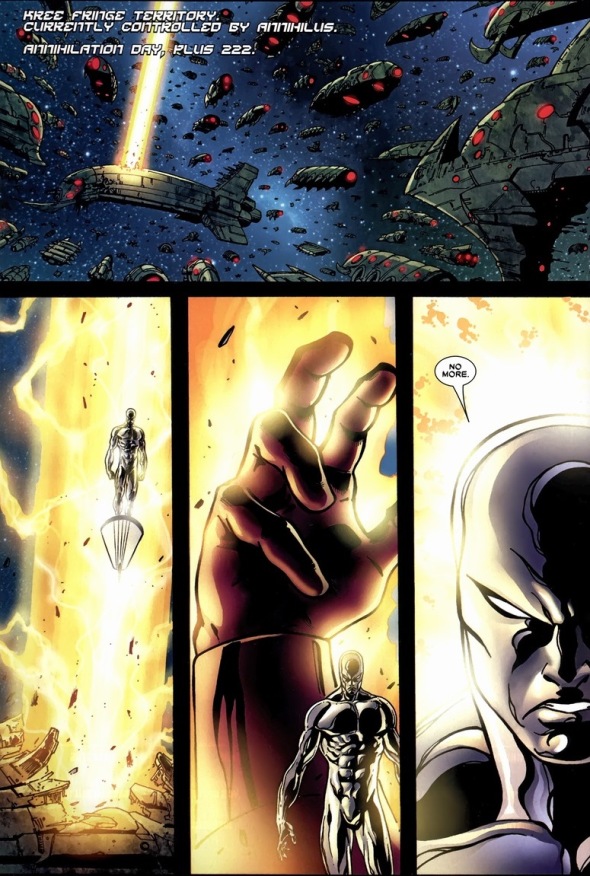 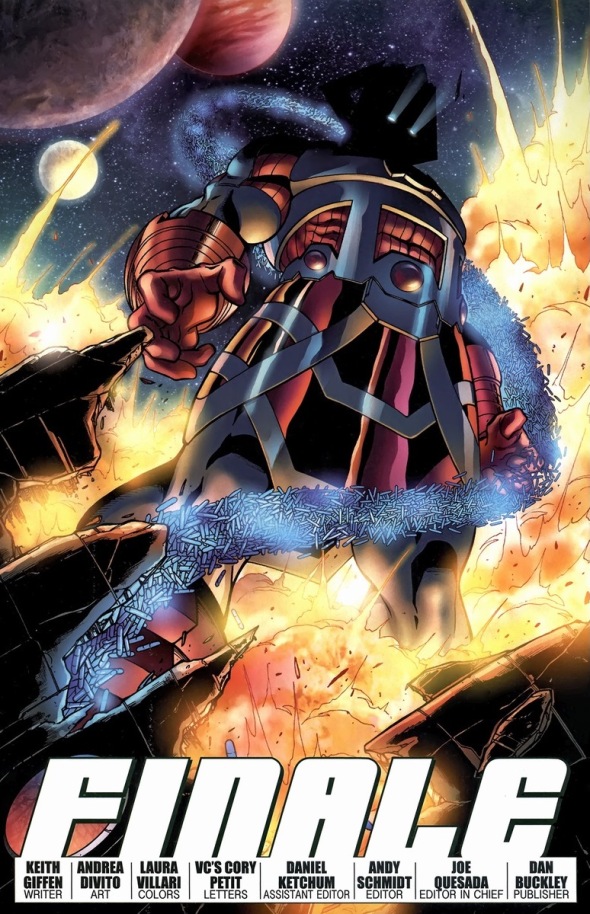 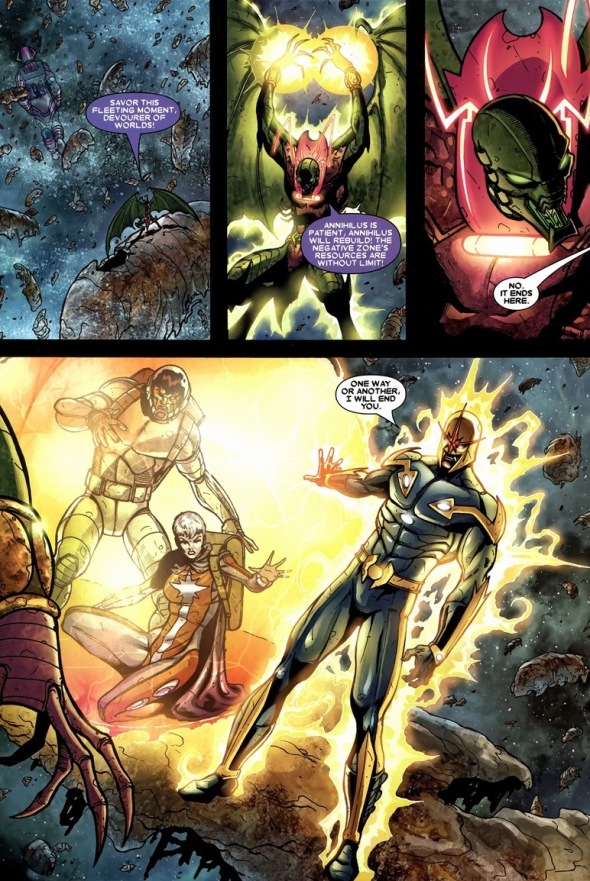 When the fate of trillions of planets are at stake, even our dear Galactus, Devourer of Worlds, pitches in.  My friends, Cosmic Marvel rocks.  So what happens to Cammi?  We’ll cover her new Drax-less adventures on Wednesday.  Until then, all I can give you is foreboding and Cammi’s new ally: Thanos’ Chaos Mite fairy. 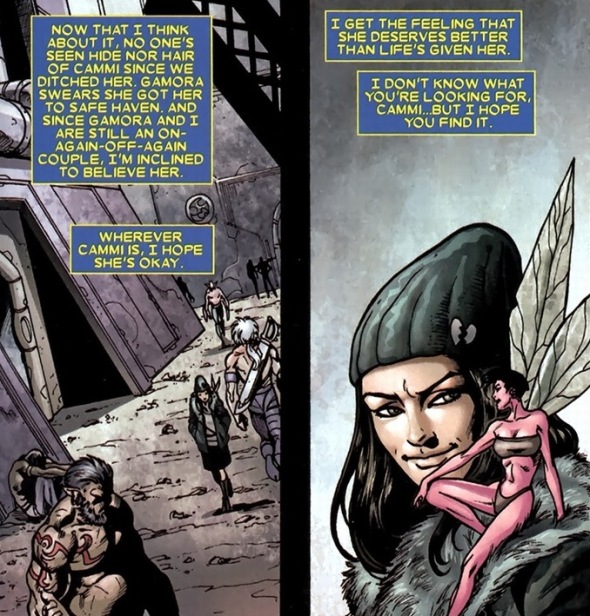