Batman vs. Azrael: round two

One more fight!  We jump forth about ten years from our last article, as Azrael’s solo series begins to wrap up.  Luckily, the years haven’t calmed down the hallucinating, post-traumatic suffering, fanatical religious superhero too much.  With everything poor Azrael has worked for spiraling out of control — including his sanity and friendships — only one person can bring Azrael back to the light one final time.  Using his fists.  In Azrael #98-99, written by Denny O’Neil and drawn by Sergio Cariello, Batman misinterprets Azrael’s current situation and reacts poorly and violently, like all good superheroes.  And what did Azrael do to incur Batman’s wrath?

To be fair to Azrael, it was a criminal dressed as Santa Claus, but I have a feeling Batman has been looking for an opportunity to justify his takedown of Azrael for a long time now.  Attacking St. Nick just broke Batman’s back of tolerance, unlike Bane who broke his normal back. 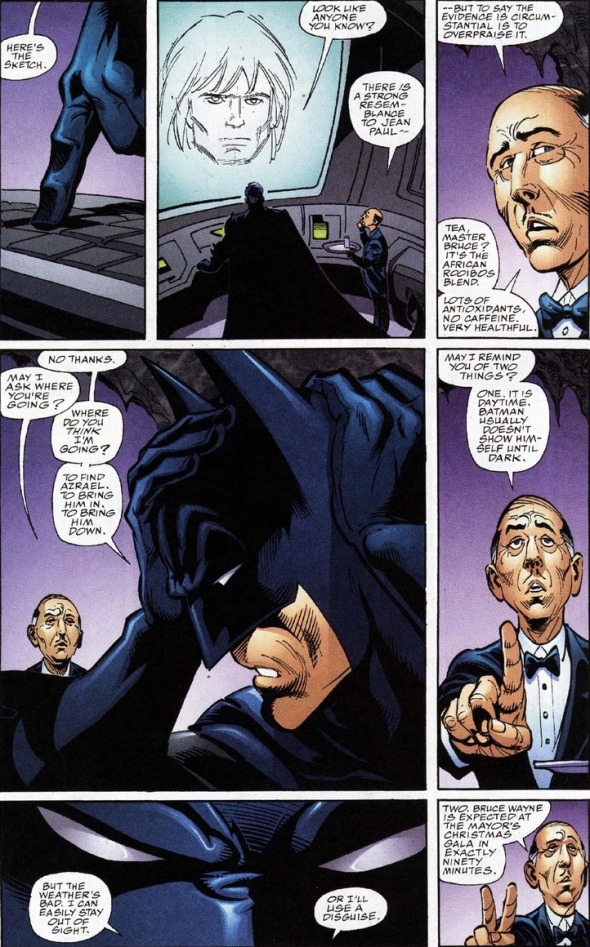 To Alfred’s benefit, I looked up African Rooibos and it’s a real tea.  It contains no caffeine and offers many different health benefits — Alfred’s no liar.  Unfortunately, it doesn’t prevent Azrael from clawing Batman open over an obvious misunderstanding.  But I may be giving too much credit to Azrael — the dude’s struggling.  Like right before Batman shows up: he’s having a sword fight against a ghost:

The spirit of St. Dumas talks to him, commanding him to do all sorts of terrible things or suffer the severe punishments caused by disobeying.  So he swordfights the ghost.  It’s complicated.  And while Batman slapping Azrael around wouldn’t be so bad to snap our protagonist into a dose of sanity, the Dark Knight’s arrival sparks another global superhero problem: Azrael really doesn’t have time for this — and the time it would take to discuss their feelings or even push Batman’s opinion one way or the other would ruin other far more important plans.  Plus, Batman tends to be a bit stubborn, to put it mildly.  Note the similarities in the beginning talk from their initial fight last article.  Oh, and the yellow text boxes are Batman’s narrations. 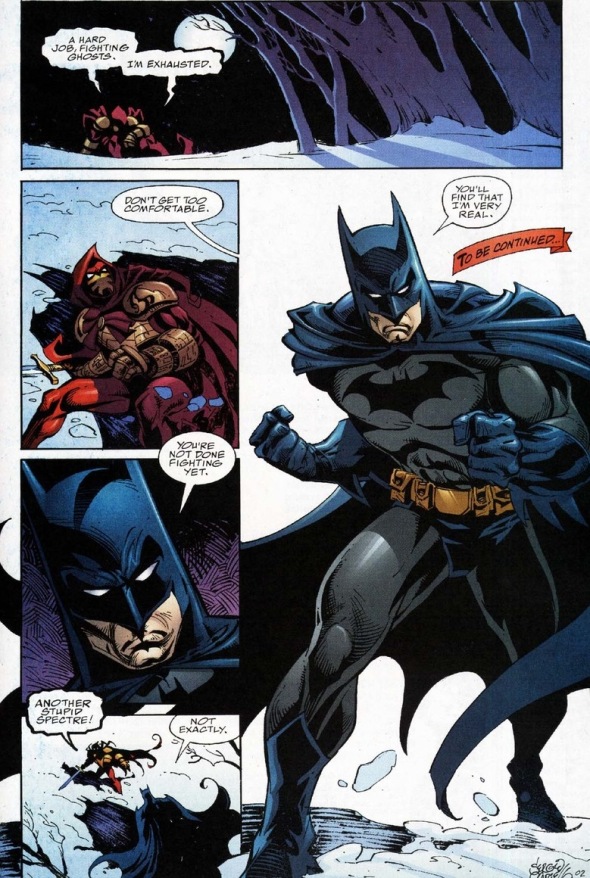 Yes, Azrael becomes the rare exception to Batman’s vigilante group — our buddy has actual superpowers because of the schizophrenic genetic doohickies the Order of St. Dumas fetuses receive. Comics were weird in the ’90s.  More importantly, this isn’t the whacked-out Azrael wearing the mecha-Batman costume.  I mean, he’s still certifiably crazy, but he won’t be goaded or tricked like last time.  Batman has to win this fight the old fashioned way: batarangs and kung-fu movie poses.  How beautifully cheesy was that double jump kick in the moonlight panel in the picture above? 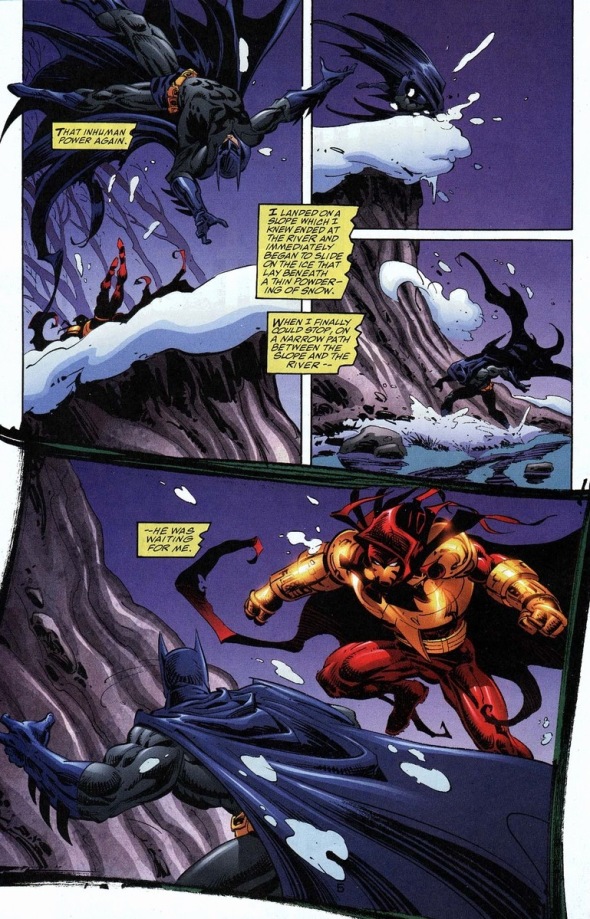 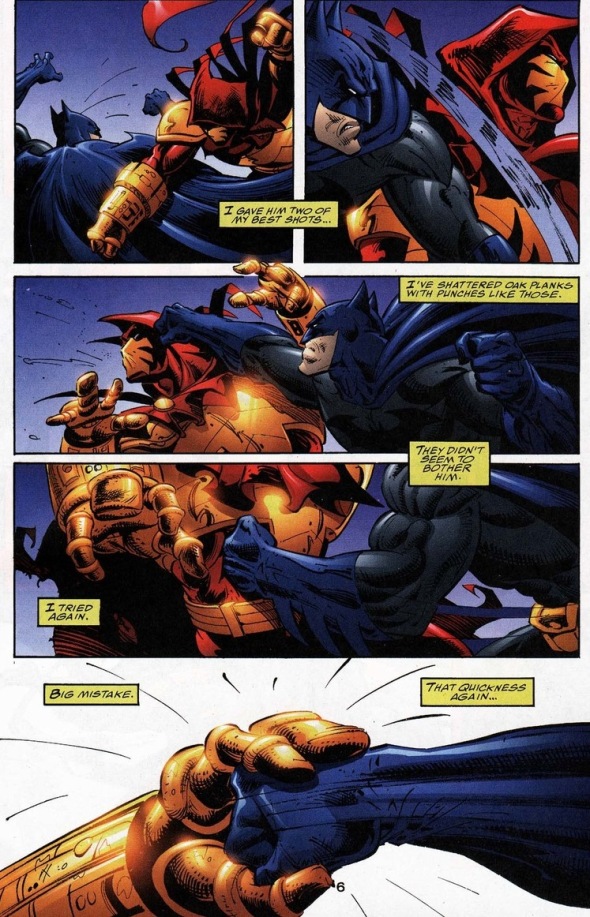 I am by no means a carpenter, but Google tells me oak’s a tough wood to break, which I assume Batman has punched through cabinets and coffee tables to surprise the bejeebies out of bad guys before, most likely on the other side of the wall right after the henchmen proclaims to his buddy that he thinks they’re finally safe.  If Batman has an actual weakness, his own reliance on using physical strength against stronger, more durable supervillains like Bane, KGBeast, etc. could definitely count up there with his other weaknesses like healthy relationships and smiling.  Let’s learn something valuable today: if you want to battle anybody, it’s always better to battle superheroes.  They’re far kinder in the embarrassing aftermath.

Azrael, finally free of Batman’s influence, has one final issue of his solo series before it ends — so his freedom’s not terribly lengthy.  On Friday, we’ll delve into more Azrael but with something mushier and heartwarming.  And punching, but that’s always implied.

3 Comments on “Batman vs. Azrael: round two”