← Azrael & Batgirl meet the Joker
Batman vs. Azrael: round two →

We jump back a few years from last time’s article to the post-apocalyptic earthquake-destroyed ruins of Gotham City that took place during the Batman event No Man’s Land.  Gone is the crazy, unstable Azrael.  We get to enjoy today a kinder, friendlier, still-schizophrenic Azrael — a man who just wants to do some good while dressed as a medieval crusader.  We’ll focus on one more Azrael Christmas adventure (no dodging punches from Batman) in Azrael #61, written by Dennis O’Neil and drawn by Roger Robinson.

So No Man’s Land is over.  Lex Luthor’s company stepped in to rebuild the city and the Gotham police force/Batman and friends have regained their hold over most of Gotham City.  All that’s left is the Joker and his devious plot to kidnap dozens of babies.  But that’s for later on.  Azrael (real name Jean-Paul Valley) grew up religious, but more in a brainwashing cult than anything established like Christianity.  Ever want to hear an old woman describe Christmas to a grown man who looks like Thor?  Of course you do. 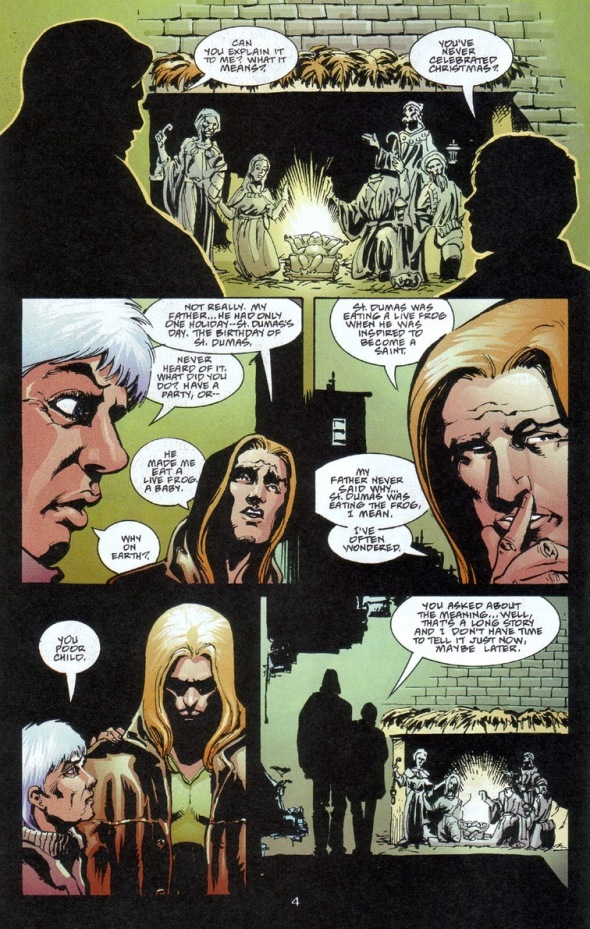 The metaphor given to baby Jesus pretty much applies to every superhero who ever existed.  Except maybe the Punisher.  Did you know I once received an angry comment from someone in a previous article because I assumed the Punisher to be super smelly?  I refuse to back down.  The Punisher doesn’t bathe.  Axe Body Spray doesn’t come in Vengeance.  Frank Castle reeks like weeks-old gunpowder, trench coat sweat, and chunks of mobster brains.  There.  Bring it, buddy.

Back to our story, we’re in the infancy days of Cassandra Cain’s Batgirl role.  She hasn’t learned to talk yet.  Also, like Azrael, she grew up in an assassin’s clutches without all the warm fuzzies we love and experience during those loving Christmas years (or at least the first eight or so for Bruce Wayne). Fighting crime isn’t the only hobby for superheroes — sometimes it’s appreciating a sandal-wearing bearded Superman who came back from the dead to forgive all our sins or whatever.

I want you to appreciate this moment when Oracle taught Azrael and Batgirl what presents are.  Now, we know bonding time can’t be fully complete without applying our superheroes’ new knowledge. While neither of our protagonists have any extra cash or apparently ever heard of the idea of giving other people goods or services, the two have to improvise.  Batgirl first. 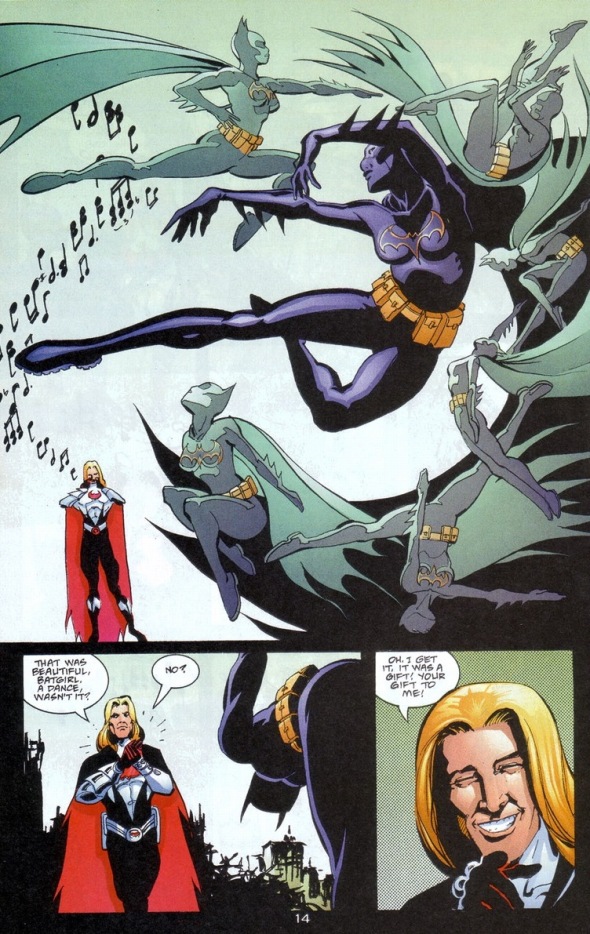 So remember last article where Batman realized Azrael may have fallen off the deep end because cameras caught him beating up a Santa Claus?  I just want you to remember that, because if superhero comics have taught me anything (and I already learned about gifts a few years ago), Santas only bring trouble.  Especially the Santas wielding axes with thick henchmen-esque accents. 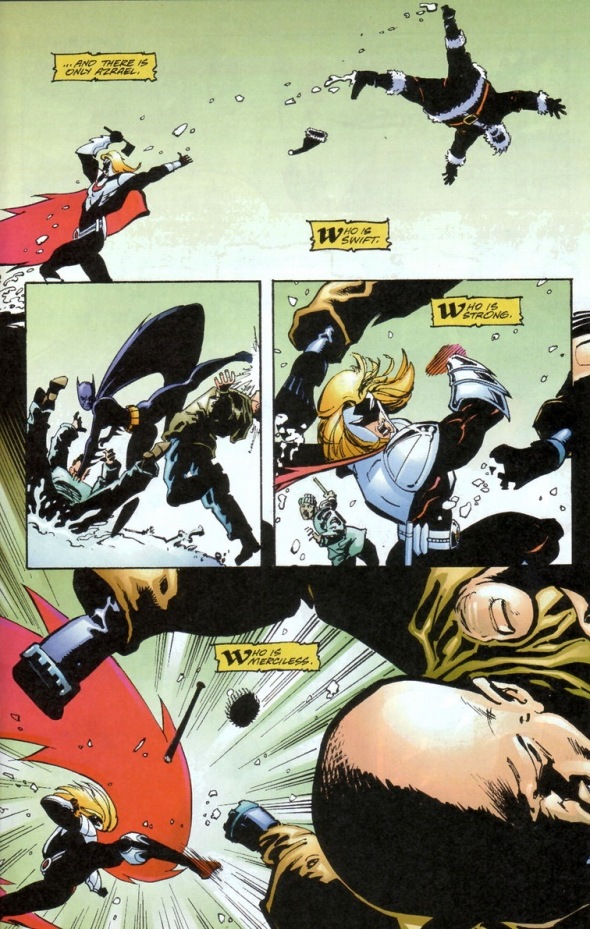 Here’s how Azrael works: if his mask is off, he’s the lovable, clueless Jean-Paul who solves his problems with smiles and hugs.  When the mask goes on, we get the powerful, butt-kicking Azrael who solves his problems by crushing the bones of all those who cross his path.  But today’s a Christmas story (that I’m writing in mid-September).  You know who hates Christmas?  Spoiler alert: Joker.

Moral of the story?  Besides babies make terrible Christmas ornaments?  It’s about the spirit of giving. Like giving yourself up as a flame shield to protect two ladies from a tree explosion.  And the girl in the chauffeur outfit is Mercy Graces — Lex Luthor’s personal assistant/bodyguard.  Azrael may have suffered injuries saving Batgirl and Mercy, but look, Luthor’s limo isn’t going to drive itself.  Oh, and a delightfully happy ending:

I know, I’m touched too.  On Monday, Azrael and Batgirl team up one more time against the Joker!