← Iron Man and the Graviton problem
The roast of the Fantastic Four, Pt. 1 →

The roast of the Fantastic Four, Pt. 2

Let’s read the rest of the issue!  I still don’t have an angle, but I can improvise my way through this.

Last time, we experienced all those groaner puns we’ve come to expect in old school Marvel.  It’s delightfully conducive with the time period.  Or not.  I don’t really do a lot of research.  But besides far more puns and wordplay than you can shake Thor’s hammer at, we also get stories.  Learn from past members, allies, more villains, etc. about the Fantastic Four’s history and life up to this point.  I mean, you probably know it all, but have you heard the Avengers tell the story?  No.  No you haven’t. 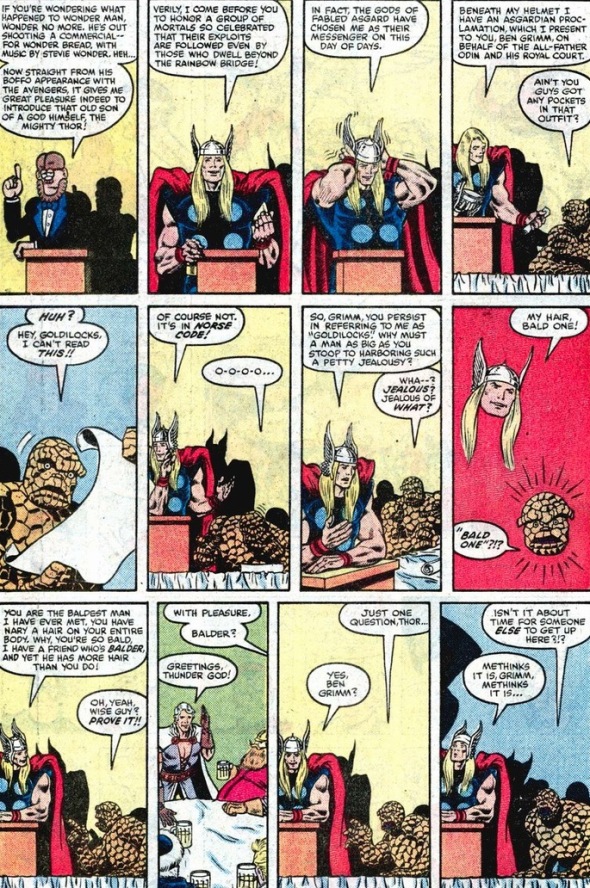 I like my superheroes with faults.  But Thor, besides being super good-looking, super-strong, super-tough, and everything else associated with super-stuff, he’s also super-funny.  It’s not okay.  The man’s the total package of the fictional Marvel universe.  He’s unfaultable.  Seriously, have you seen Thor in the past month or so?  Without his hammer, the former thunder god just stops wearing a shirt and his abs alone are enough to “shock” his opponents.  See?  I can make puns too.

Cyclops’ Nightcrawler joke may be the only Hitler joke the X-Men leader ever made.  Or the only joke he ever made.  The dude’s humorless, but then again, so’s Wolverine and Colossus and Storm, and most of the mutants.  Do you know how much Iceman has to talk just to get the humor index for the X-Men back up to neutral?

But this roast also houses a darker scheme.  Someone’s trying to kill the Fantastic Four!  It’s a mystery with a silly answer I’m not going to show you, but I think it’s important you see the seriousness of this threat: 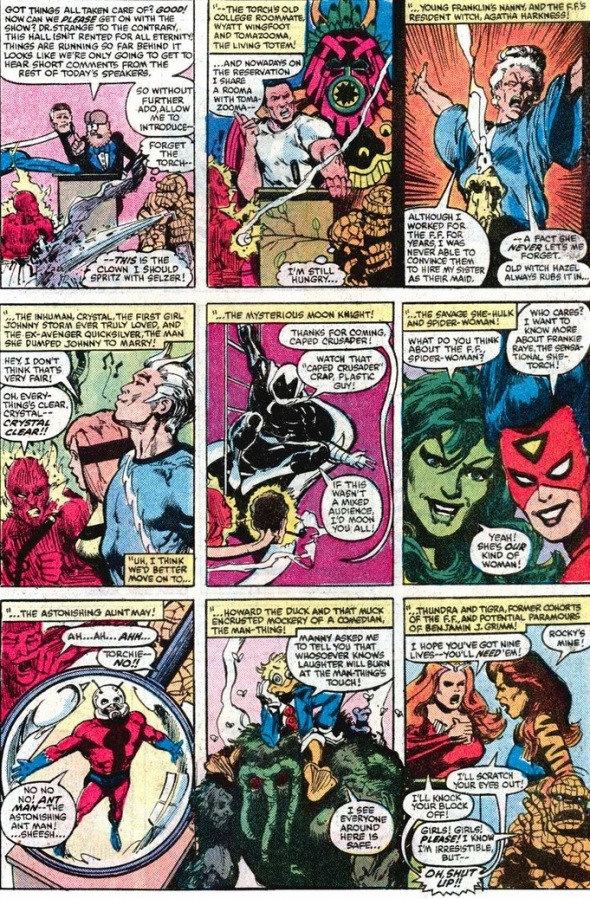 Let this be a lesson from Thundra and Tigra: no matter how ugly you are, if you can punch through a car then women will always fall for you.  Or She-Torch, a character that has definitely never existed, but Frankie Raye is real.  Well, real for a world drawn on paper.  Raye briefly served as the Herald of Galactus and called herself Nova.  And to be fair, she also served as a replacement Human Torch for a while.  So I guess She-Torch would work.  I take back what I said previously, but I still won’t forgive Moon Knight for his joke.

And like all good roasts, it’s time for the Fantastic Four to repay their friends for their barbs all evening.

Cross this off your bucket list, you can sleep easy tonight.

2 Comments on “The roast of the Fantastic Four, Pt. 2”