Iron Man and the Graviton problem

You like murder mysteries?  Of course you do, but rarely does Tony Stark get involved in an ol’ fashioned whodunit.  He’s far too busy tinkering or shooting lasers or trimming his goatee or whatever he does with his time.  But after the Marvel event Civil War and before the Marvel event Secret Invasion, Stark served as Director of SHIELD, obligating him to do stuff like find out who killed his operatives.  Get ready for a bummer today from Invincible Iron Man #21-23, volume four, written by Daniel & Charles Knauff and drawn by Roberto De La Torre & Butch Guice.

Each state in the USA gets assigned one superhero team.  Nebraska gets Paragon, Gadget, and Ultra. I don’t know who they are either.

That’s right, I called this a murder mystery when it seems obvious Graviton totally murdered Gadget. As the pieces unfold, Stark’s mental state gets slowly unraveled to the point of apparent schizophrenic hallucinations.  He’s only human.  But to make you feel even worse about this murder, here’s some personal information about the victim. 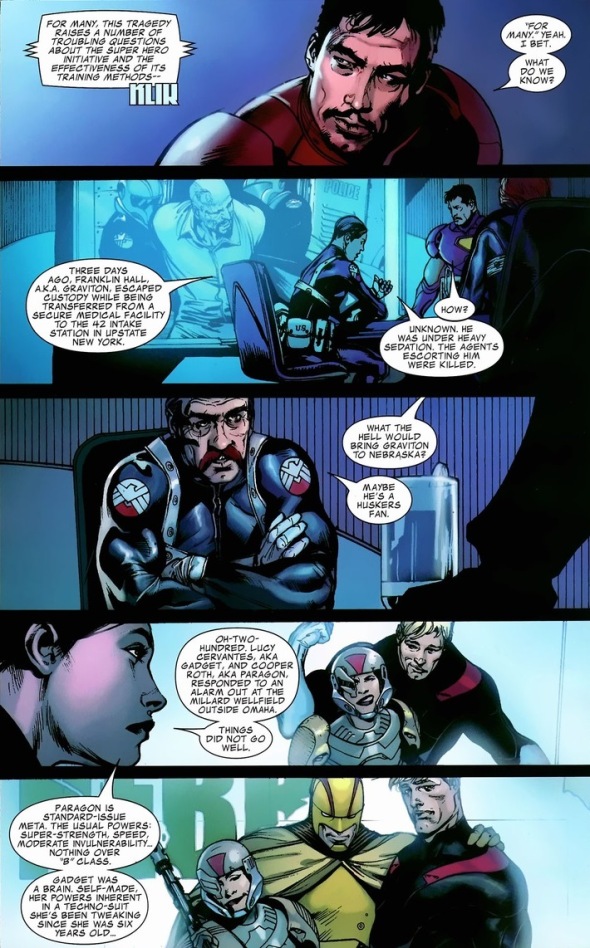 See what happens to superheroes without name recognition?  They get used by writers to show how strong supervillains are.  And Graviton gets a special “Class A” ranking that SHIELD uses to put threats into groups or whatever.  As you suspect from his name, he can manipulate gravity and whatever science mumbojumbo powers that gives him.  Most importantly, like Stark soon becomes, he’s also crazy. 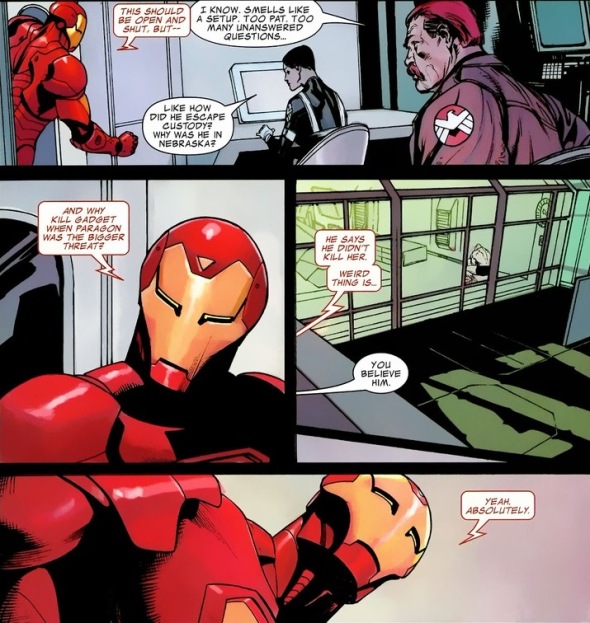 So you can tell there’s a bunch I’m skipping.  Like Stark’s hallucinations.  And a side plot with Maya Henson (who created Extremis, better known as that fiery thing bad guys could do in Iron Man 3) and Mandarin, both of whom are supposed to be dead.  Spoiler alert: they are not.  I’ll be honest with you, besides me writing this way too late to really form a cohesive narrative with my commentary, my eyes tend to glaze over when stories get too technical or time travel-y.  Iron Man’s all technical (and sometimes time travel-y), but the past ten years of his comics have been really, really good if you want to get caught up on the (iron) man.  Here’s what I would do if you time and funds are limited: start with Invincible Iron Man volume five written by the genius Matt Fraction.  It’s well worth it.  Then go back and read everything else.  Stark has been sober since 1979.  You have a lot to catch up.

Oh yeah, and the murder mystery.

We’re only on issue two of this arc, so you can imagine the plot takes a sharp turn.  Like say, through a hospital wall into the aesthetically-moody night time rain.  Oh, and Paragon’s reasons for betraying/killing his ally are doused in Mandarin lies and manipulation.  It’s one more thing I’m skipping but it has to do with all the normal motivations of having superheroes turn into supervillains.  If you need further proof of Paragon’s instability, he follows Mandarin’s order despite Mandarin being an old man with a very prominent ponytail. 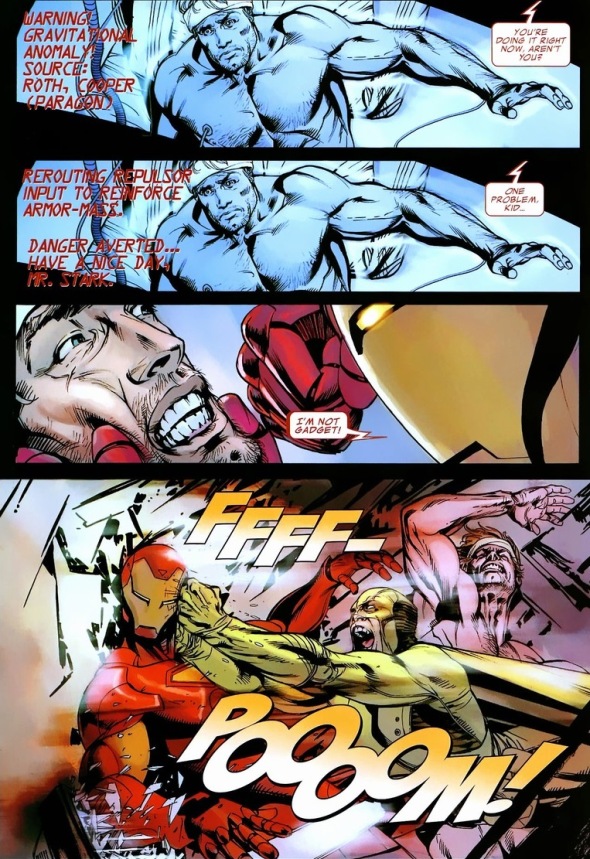 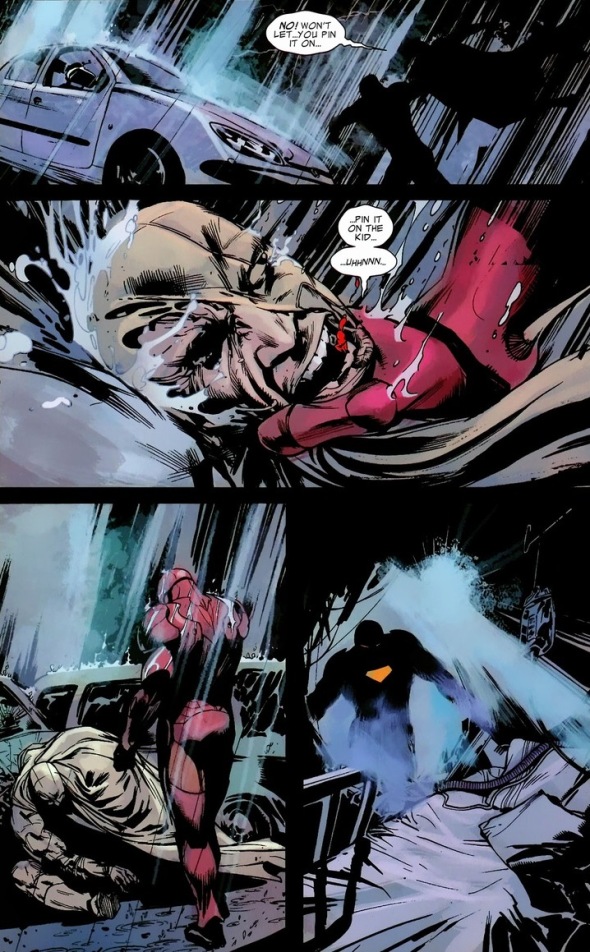 Paragon’s gone.  But luckily for our protagonist, he comes right back — like a plot boomerang.  Also luckily, Iron Man doesn’t have to fight his own battles either.  It’s nice to take a break from breaking faces every now and then. 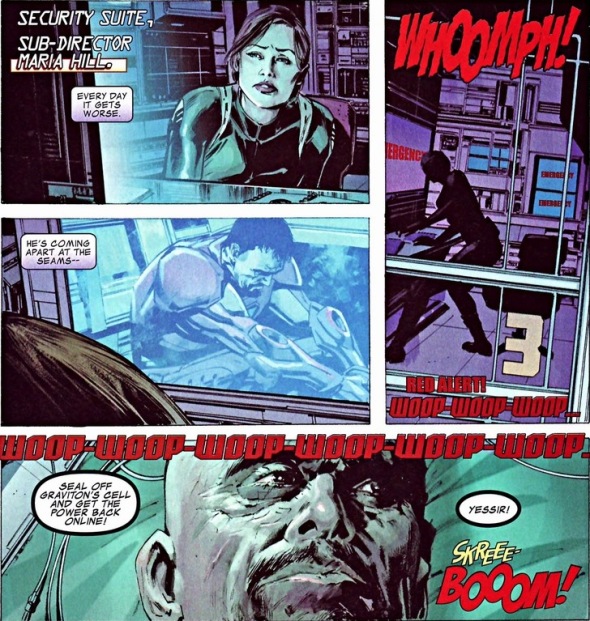 I told you this would be a bummer right from the very start.  I enjoy happy endings far more than these bleak ones, but if it’ll make you feel better, we’re only halfway through the arc.  Doc Samson hangs around, Iron Man fights his arch-nemesis, all that good stuff.  So while you’re about to witness the end of Graviton’s tale, if you have Netflix, he has a super awesome two episode part in Avengers: Earth’s Mightiest Heroes where he fights the entire Avengers team at once for a good thirty minutes of show time.  Bring your elementary schoolaged niece or nephew with you in case you get caught watching a Disney show. 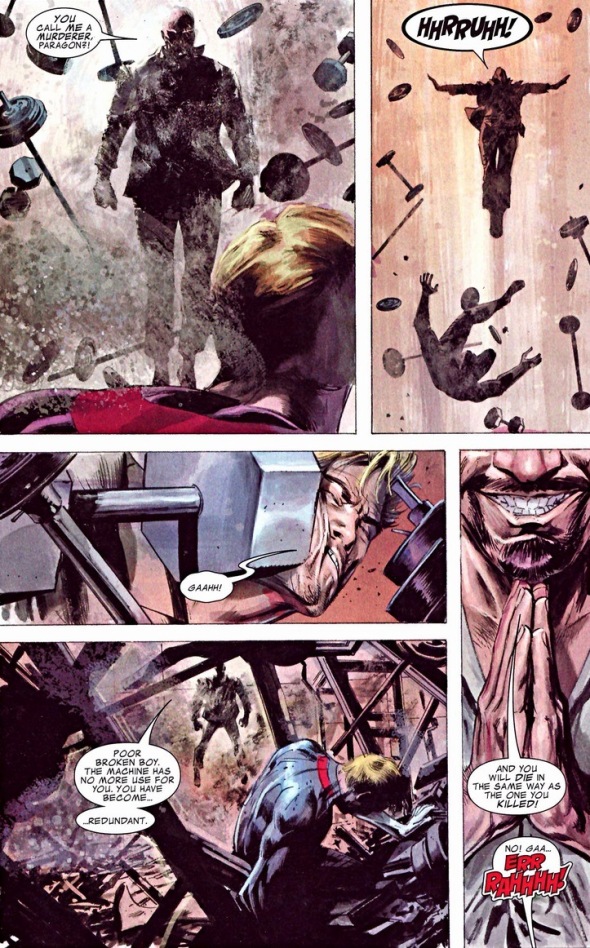 One Comment on “Iron Man and the Graviton problem”