Aquaman, Mera, and their Aquababy, Pt. 3

In our previous part, Aquaman and Mera got back together again after their marriage tore apart from the death of their child.  Now it gets torn apart again, because happy endings don’t bring in readers. So while today’s story is all about tragedy and political uprisings and revolutions and everything that makes a superhero story great — we’re here to complete our mission for Amnesty International‘s 16 Days of Activism Against Gender-Based Violence.  At the command of our leader Reid Vanier and Modern Mythologies, my job is to hopefully bring awareness on one of the injustices that comic books committed against their women — in this case the differences in emotional outbursts between the fish king and his fishie wife.  And exactly like part two, Aquaman’s the picturesque self-confident do-gooder against Mera’s wild insane ramblings/attacks.  And sure, it’s not totally fair that the writers portray Mera in this manner, but on the other hand, her child did die.  So she has that excuse.

We’re in the late ’80s, eleven years after Part 2.  Our story took a eleven year break — or the amount of time it took for Aquaman to get another solo series after his previous one wrapped up in 1978. Currently, underwater war: 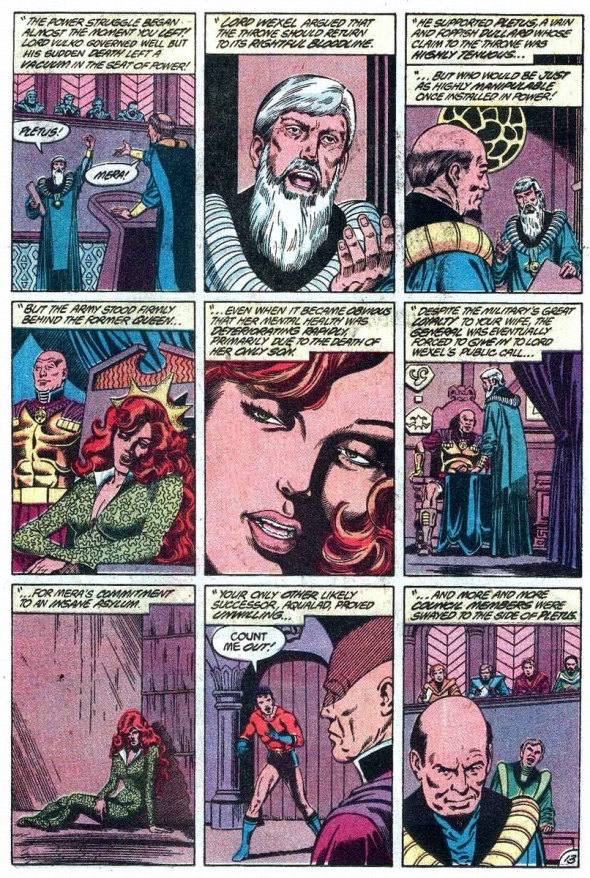 I love this scene just for the brilliant notion of Aquaman screaming, “Nobody’s beating up on my woman!”  Can we see how sweet it actually is, simply because of the “stable or not” comment?  Our Atlantean king punches his own dudes (who are absolutely in the right) just because they’re trying to restrain his crazy wife.  It’s romantic, right?  Probably?

But now the comparisons arise once more: Mera says some really mean things in the next dozen pages while Aquaman works tirelessly to keep her from hurting herself and the man she loves. 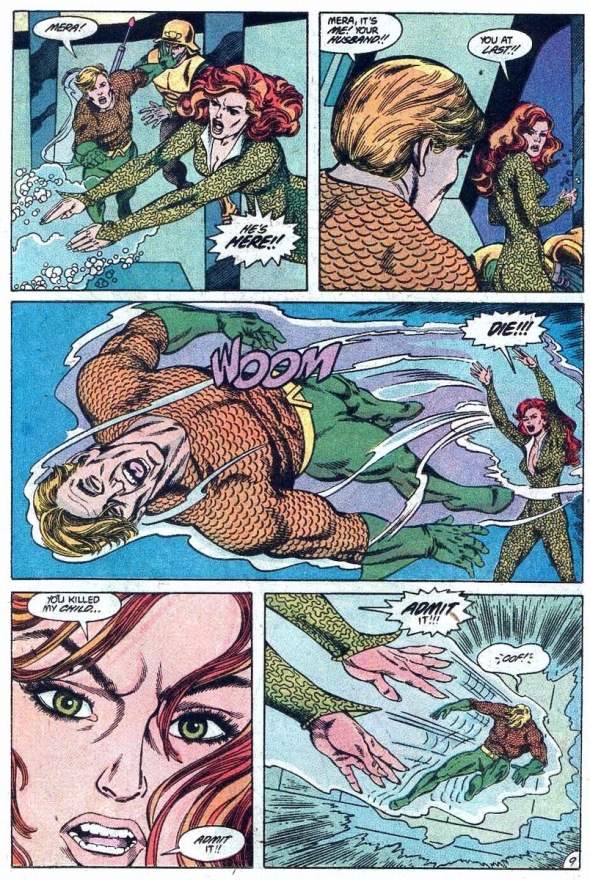 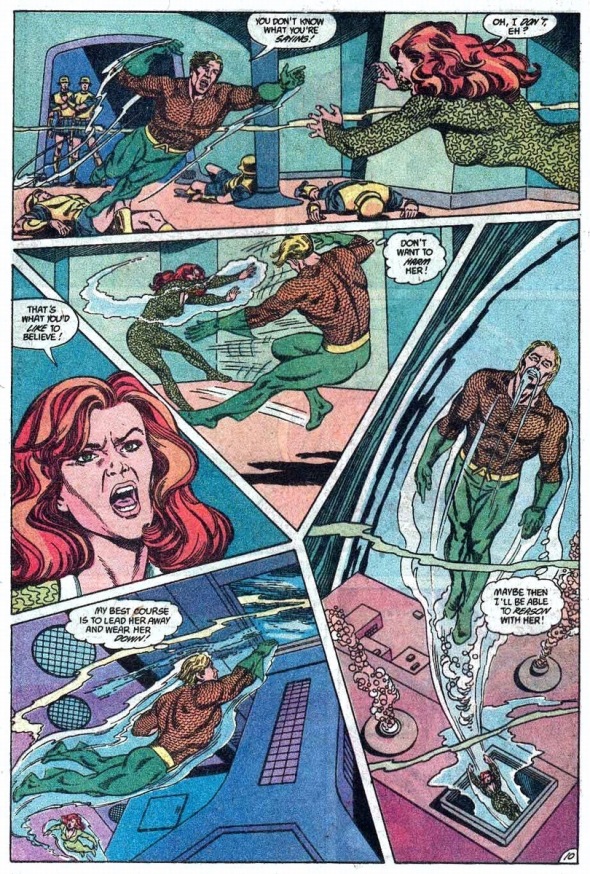 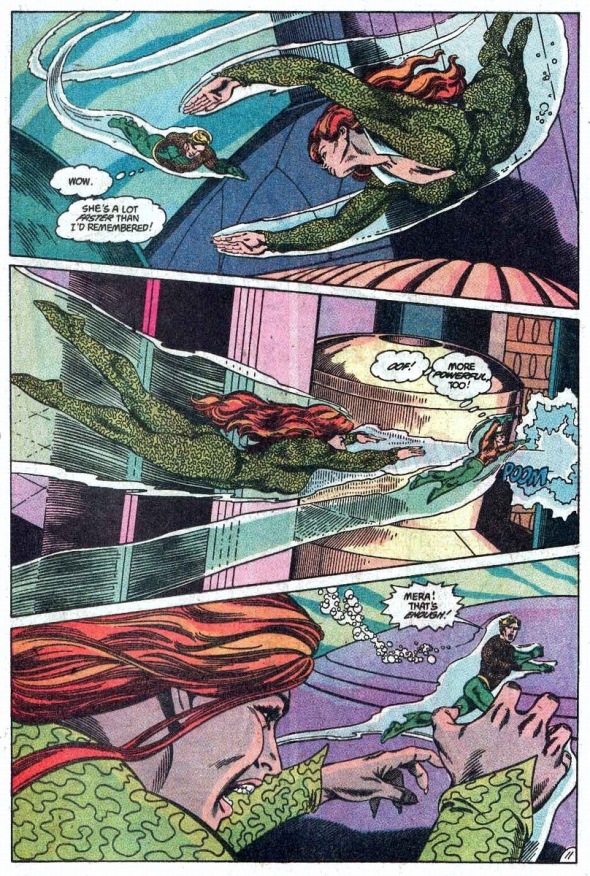 Sure, Aquaman could use his manly hands to knock her out, but that’s not what superheroes do. Despite Mera being a superhero.  So just like when Green Lantern killed the entire Green Lantern Corps during those few confusing years he became a supervillain, Mera’s attempt to murder her husband forever glues itself to Mera’s lists of faults and mistakes.  Remember, some people still haven’t forgiven Hank Pym for backhanding his wife Wasp (who routinely gets injured ten times worse every issue or so in battle), and that happened almost thirty-five years ago.

But can we all agree that Mera’s biggest fault is her style?  If mold shopped at Chico’s, we’d have Mera’s outfit. 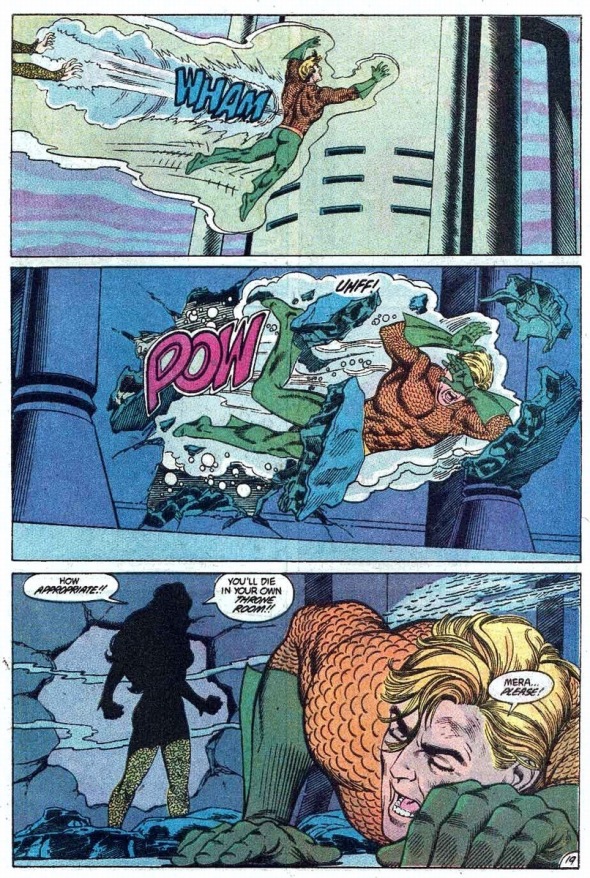 By this point, Mera’s the full-on antagonist of this issue.  Anyone who shouts lines like a bad Bond villain is definitely in the wrong here.  Aquaman’s pleading and emasculating himself so he doesn’t have to lay a hand on his wife.  What superheroics!  But poor Mera, she crossed from irrational to evil.  You all love melodrama, right?  Get ready for this gem: 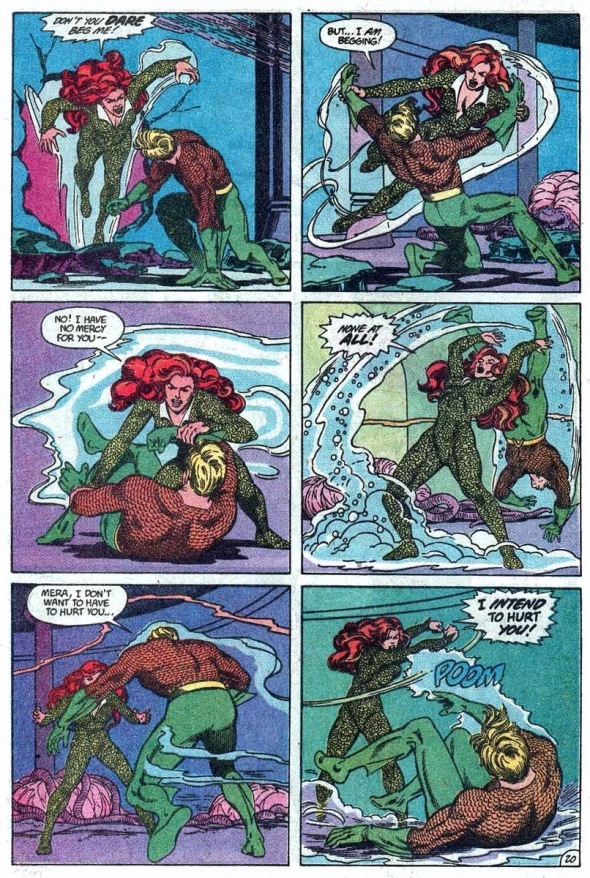 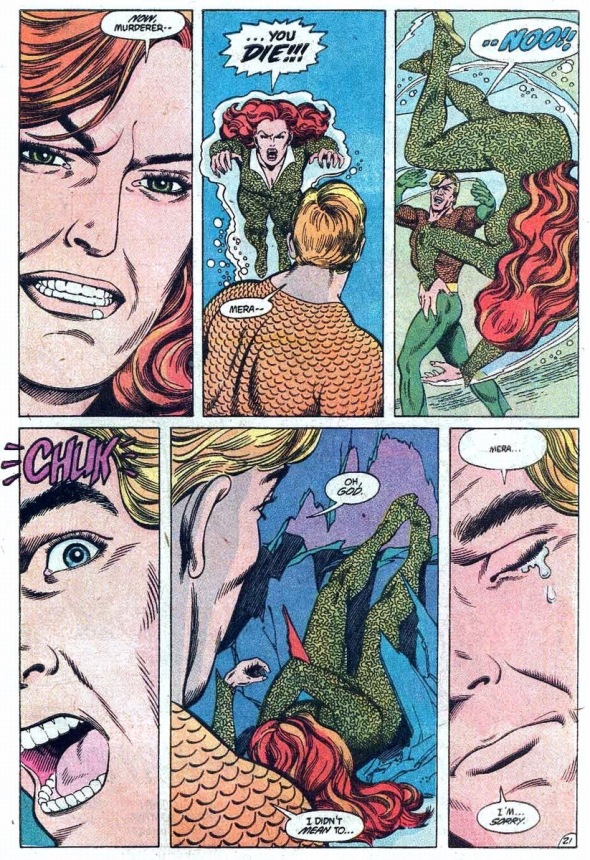 Here’s what makes this moment sad (and it’s not that she died, because y’know, comic books): Mera believes her craziness now.  Her insane beliefs wrapped around her long enough to squeeze out any skeptical ideas from that distraught brain of hers.  She spends the next few years of comics 100% understanding that Aquaman killed their kid and he’s the worst half-human/half-Atlantean that ever walked/swam this planet.  If anything can relate to what Reid wants us to be aware of, it’s that this change in her personality serves only to add drama to Aquaman’s already pretty full plate of soap opera.  Or to sum it up, a woman being hurt only to further a man’s story.  Oh, and now comes the meanest line of the arc: 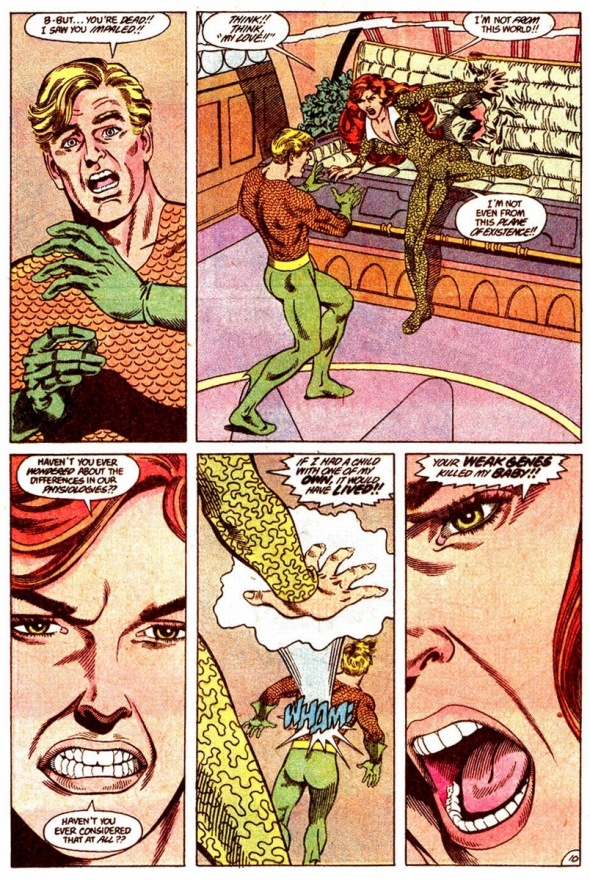 Weak genes, right?  I’d call it a burn but they’re underwater, so that won’t work.  Can’t you feel Professor X squirm uncomfortably as you read that line?  And let’s be fair, while Mera’s not exactly Atlantean (she’s sort of a water alien?) Aquaman’s half-and-half genetics make him far stronger than both humans and Atlanteans, so what’s she complaining about?

As we wrap up today, hopefully with a larger understanding of treating female superheroes/supporting characters with the respect, love, and fairness they deserve (that was the goal, anyway), there’s only one way to properly end our week-long sad-fest: Aquaman collapsed in a heap of tears.

Mera may not, but I still love you, Aquaman.

One Comment on “Aquaman, Mera, and their Aquababy, Pt. 3”