The moments before the DC reboot were certainly bright.  As in they had a series called Brightest Day that brought to life a bunch of dead characters just before the reboot made that unneccesary.  Luckily for everything wet, Aquaman gets to be one of those fortunate few to come back from the dead.  He died a few years before, it’s complicated, and I’m skipping that life (death?) event.  But before he gets to do things like enjoy himself and be happy, he has a few loose ends to tie up.  Like Black Manta in Brightest Day #10-11, written by Geoff Johns & Peter J. Tomasi and drawn by Ivan Reis, Scott Clark, Patrick Gleason, & Joe Prado.

Oh, and apparently, Mera’s first appearance was retconned so that she was actually an assassin who fell in love with her target.  There, you’re all caught up, but it needs to be discussed so Mera can swim away.  How can Aquaman get back his self-esteem with his more powerful wife at his side?

You guys remember the Young Justice cartoon?  I know you’re upset it got cancelled.  But most importantly, the series introduced the new Aqualad (Jackson Hyde or Kaldur’ahm depending on comics or TV).  So to keep comics and TV equal(ly flushed with money), we get this kid formally premiering: 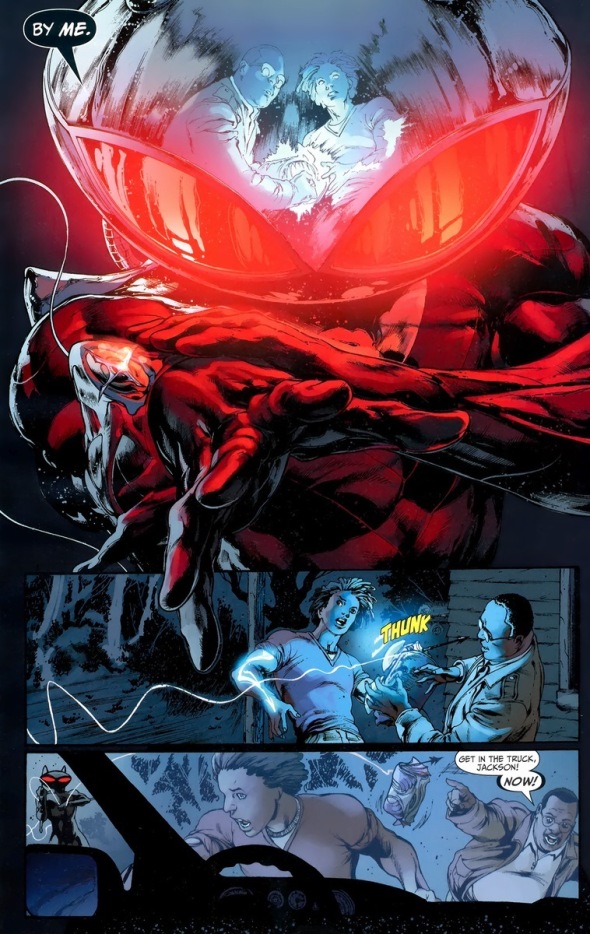 Kind of a spoiler, but I’m going to tell you anyway: Black Manta is Aqualad’s father. Much like other supervillains, he’s an awful father, always trying to kill his offspring and other bad-parent things. Unlike Aquaman, our new teenage superhero has powers more like Mera, which is the whole controlling water as opposed to the creatures that live in it.  And to kill two birds with one stone, Black Manta’s suit gives him the normal super strength, durability, and a delightful horde of weapons to shoot at civilians.  Oh, and a laser face mask.  The basic stuff.

Look, I know Aquaman hasn’t even shown up yet.  You’re looking down the barrel of ten Aqualad pages, and our title protagonist hasn’t shown one gill or fin.  Well, don’t you worry — you know superheroes.  He’s waiting for the most dramatic moment possible to pop up and begin pounding his arch-nemesis.  But does he still stand a chance without his hook hand or cool beard or devil-may-care attitude?

The trident’s a nice touch, though I guess it’s sort of a quin-dent with five prongs.  Please take a moment in the next few pages and admire Black Manta’s incredible boasting.  Aquaman outclasses him in every area of combat (I guess except in laser face masks), and our bad guy still prattles on like he’s not fighting a dude who can shrug off bullets and lift tanks. 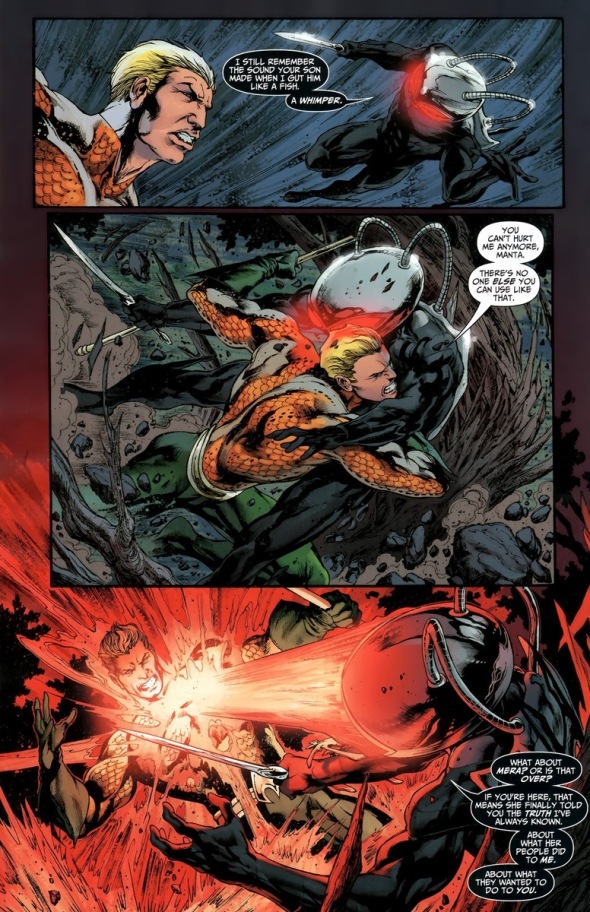 Am I the only one who doesn’t see the big deal about Mera’s confession?  Sure, she may have originally planned to kill him, but she also married him a few times, popped out a few of his children, and ruled Atlantis for years with Aquaman at her side.  And let’s be fair — Mera has tried to kill Aquaman many times in their relationship, so who cares about the non-first time she was supposed to?  Is it about keeping secrets?  You know who doesn’t have time for these games anymore?  Damn right, Aquaman.

We’re not done with Brightest Day!  Get ready for beach warfare next time as Aquaman, Mera, Aqualad, and Aquagirl team up to fight other people who have water-themed powers!

4 Comments on “Aquaman vs. Black Manta”