← Batman vs. Punisher 2
The Batman and Daredevil team up 2 →

Finally, right?  You know you’ve been clamoring for it – Batman does many things, but fighting non-powered dudes who shoot guns isn’t one he does often.  By that I mean every ten pages as opposed to the entire issue cover to cover.   But this team up carries a far different weight than the last article, due to the whole Batman and Punisher disagreeing violently over their very moral cores.  So when they have their inevitable fight, it’s for real.  No genital measuring contest here.  Except in Batman/Punisher: Lake of Fire, written by Dennis O’Neil and drawn by Barry Kitson & James Pascoe, you might notice something different about this Batman.  Hint: this comic came out in 1994.

That’s right, my friends.   It’s Mecha-Batman.  The lunatic Azrael still reigns over Gotham City as their forced caped crusader since Bruce Wayne’s back remains still broken by Bane.  Azrael’s cult brainwashing and inferior complex to the real deal drives him further into those insanity depths he jumped in long ago.  But since I introduced Azrael, I’ll give you Punisher’s intro as well.  Spoiler alert: religion doesn’t come up as often with him. 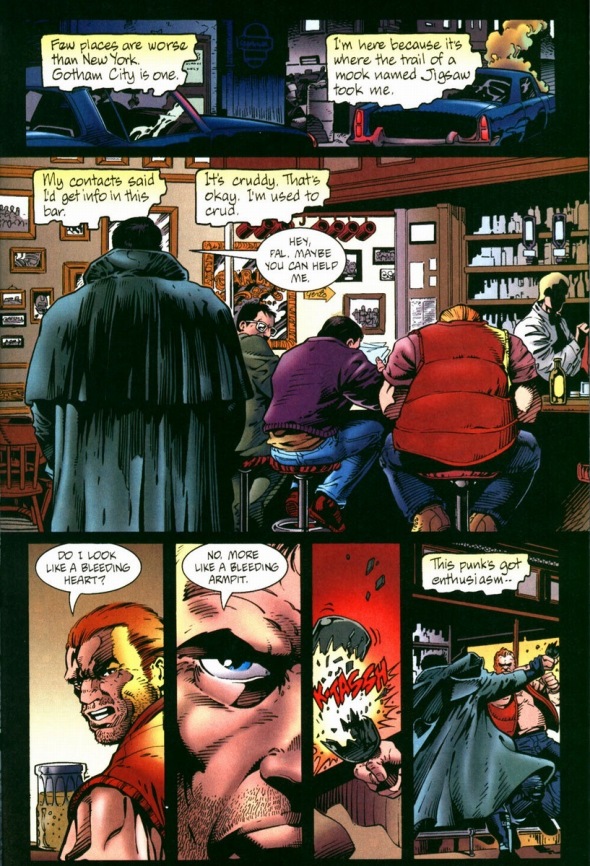 I know that going into “stats” or superpowers is a useless discussion.  The writers determine many of the imaginary limitations for the imaginary characters, but it won’t stop me from attempting it – it’s very late, and I have space to fill.  Azrael’s suit makes him stronger, tougher, and faster than Punisher.  But Punisher, usually armed with only silly weapons like guns and bullets, takes on Marvel supervillains frequently enough for that to negate all of Azrael’s benefits.  Plus, the Punisher fights dirty.  Don’t go expecting a long drawn out ordeal – it’s a six page fight – but I hope it’s bloody enough to satisfy your superhero bloodlust. 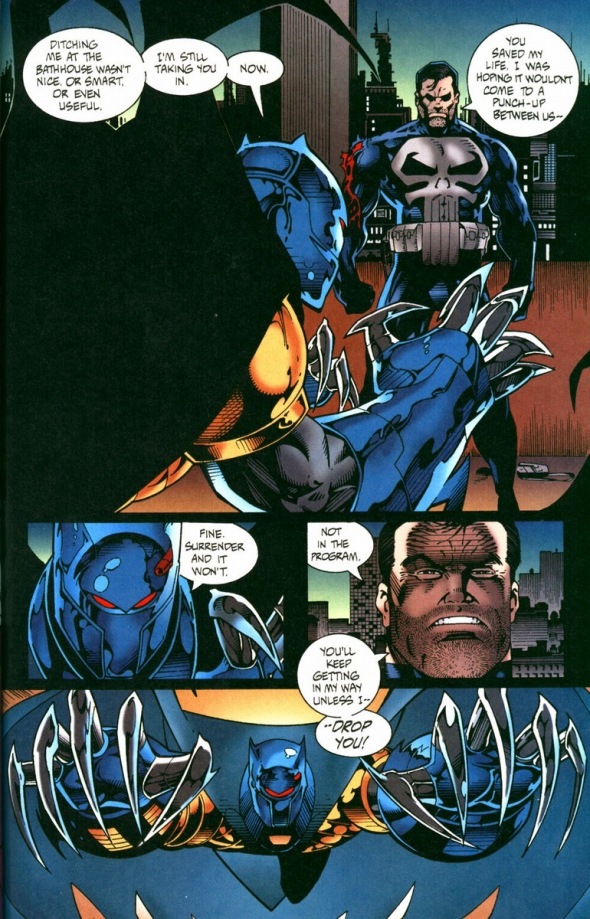 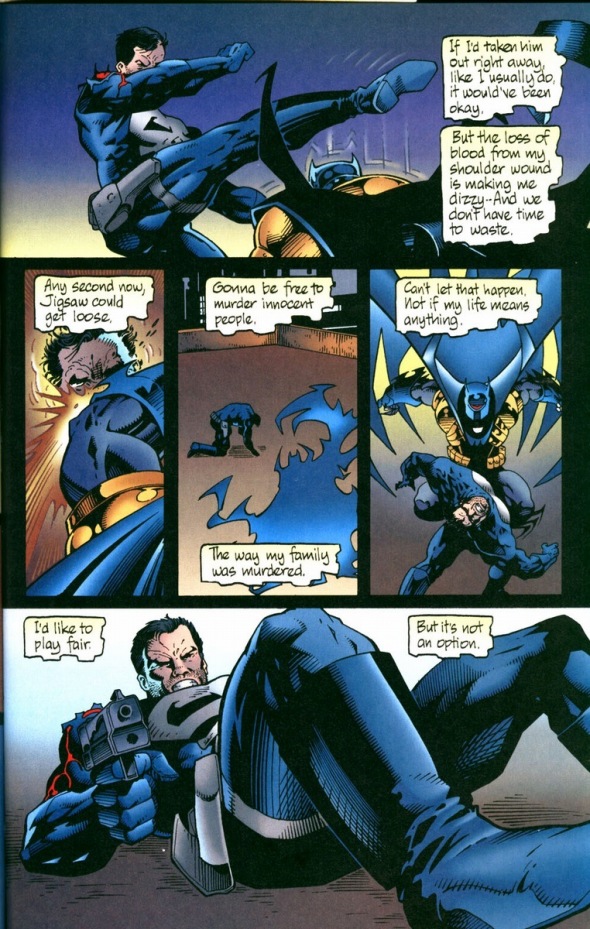 Punisher isn’t cheating.  He thinks he is, but he’s not.  If Mecha-Batman can use super strength and giant claws to fight a man clad in just spandex, it’s not against the rules if the Punisher pulls out a pistol.  Actually, the fight should have probably started this way.  And also, since when is the Punisher against cheating?  The only reason the team up had to include Punisher’s baddie Jigsaw is because Jigsaw is the only bad guy Punisher has.  He has a rogue gallery of one.  His oppenets tend not to last more than single issue when Punisher’s modus operandi is to murder them.  Almost always by cheating. 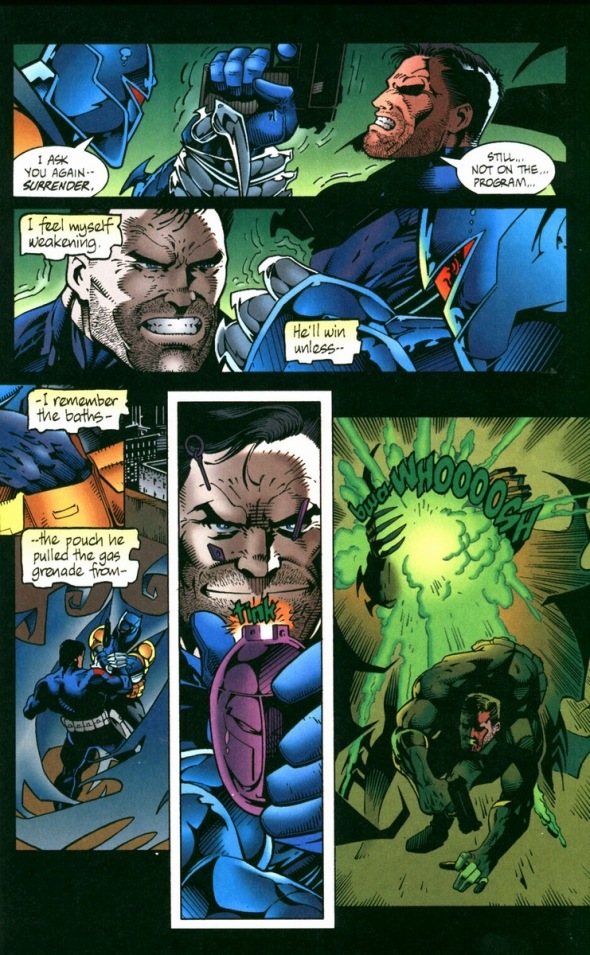 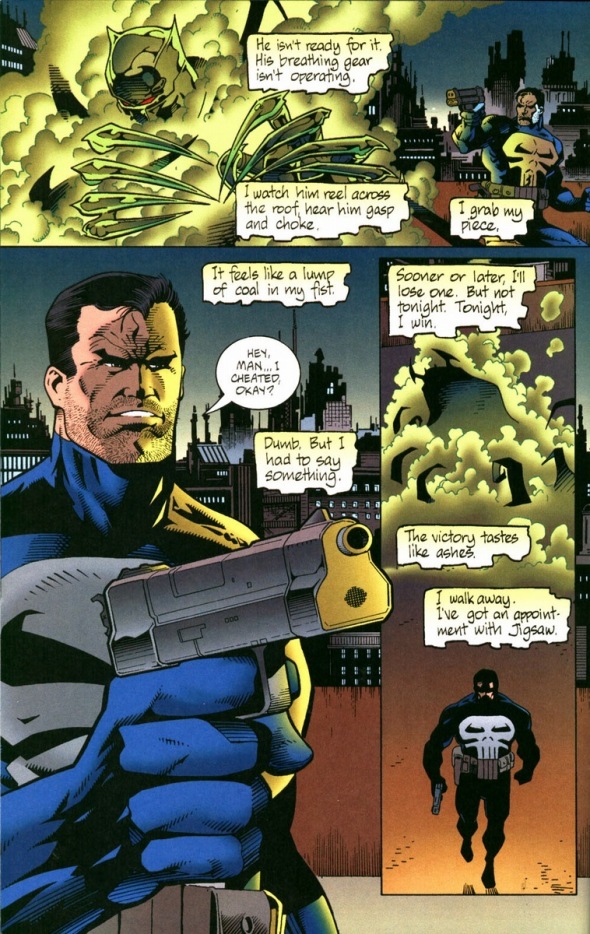 Good news.  There’s a second team up, and Punisher fights the correct Dark Knight next time.  We’ll read it next time to finish up our crossover articles, as it’s hard to find enthusiasm for all those Silver Surfer team ups.

4 Comments on “Batman vs. Punisher”