We can fight our evolving pop culture as hard as our desperate little hearts can manage, but technology has caught up and surpassed comic books.  The limitations of the static medium of pictures and word bubbles can’t compare to a CGI fight scene or romantic interlude or musical number or whatever TV/movies want to accomplish.  Still, that’s no reason to give up.  With the correct writer and artist, our chosen artistic form can create marvelous fight scenes, powerful romantic moments, and everything else you so deserve and desire.  I present to you proof of that with the incredible archery fight in Green Arrow #20, written by Jeff Lemire and drawn by Andrea Sorrentino.  You want two dudes shooting arrows at each other with the same suspenseful build up you get from watching what I assume would be a very awesome new Olympic sport?  You have it. You’ll love it.

We’re in the New 52 – note Oliver Queen’s lack of Van Dyke facial hair.  I’m skipping all important set up.  All you need to understand the story is that the supervillain Komodo – an evil Green Arrow – is trying to kill Green Arrow.  There.  Comic books are pretty to understand sometimes.  But these next four pages truly showcase what simple drawings can accomplish.  As Green Arrow and Komodo shoot arrows back and forth at each other, you’re witnessing two vital ideas: first, in the hands of a skilled artist, a fight scene can flow just as brilliantly as any movie, and two, Green Arrow looks so much better shaven.  He already has his Robin Hood gimmick; the mustache and goatee combo is a superfluous gift much better suited to a boring or non-descriptive superhero.  A Van Dyke is a powerful present given to the correct face.

Have you noticed that every hero in the New 52 wears armor instead of spandex?  Superman, who’s immune to everything our pitiful Earth brains could ever conceive, wears a full suit of armor. Batman’s protected by armor.  So is Aquaman and the Flash.  And good!  If, say, our beloved Superman is going to be punched by Doomsday hard enough to slam into our moon, he should absolutely wear something beyond a thin layer of underwear.  If Green Arrow, who has no powers to begin with, wants to wear protection (though sleeves for wussies, I guess), he darn tootin’ should. 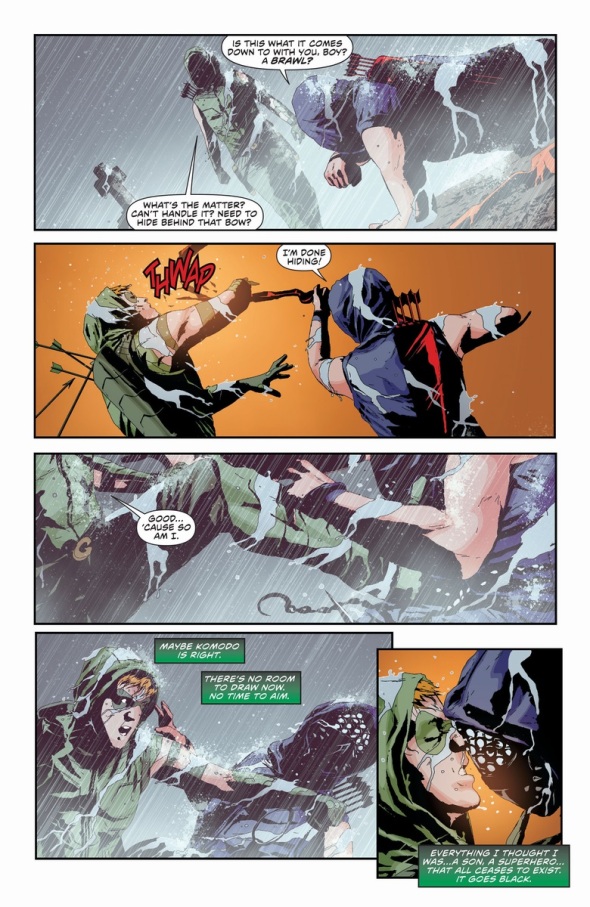 Superheroes gain an unfair literary advantage in the rain.  Since rain always symbolizes hopelessness or depression or frustration, our superheroes automatically enter the battlefield coated in the gloomy downside of a hopeless, depressive, or frustrated fight.  So of course good triumphs over evil.  The more “dark” the setting, the more victorious our superheroes’ actions become.  When Green Arrow takes down Komodo with an arrow in the eye (which isn’t a spoiler as you can clearly see it below), oh, how powerful the moment becomes.  It feels good.  Good rocks, evil sucks.

In summary, the New 52 is awesome.  I mean that with every fiber of my heart.