← Hawkman loves Hawkgirl
Storm vs. everybody →

In the 2000s, no one had it rougher in the Marvel universe than Daredevil.  His identity was revealed as Matt Murdock, he watched his girlfriend die and another wife divorce, his career ruined, etc.  He even got set on fire at one point.  Eventually, the poor guy ended up in prison, because that’s the next logical step in misery.  Today, as we cover Daredevil #82-87, written by Ed Brubaker and drawn by Michael Lark & Stefano Gaudiano, all the loose ends of Murdock’s life combine in a whirlwind of sad chaos.

We pick up about halfway through the arc, and so far, prison hasn’t been kind to Daredevil.  First, his enhanced senses don’t do well in the stinky, noisy cells.

Then, his best friend and law firm partner gets stabbed.

All the crime bosses he put away want to have some words. 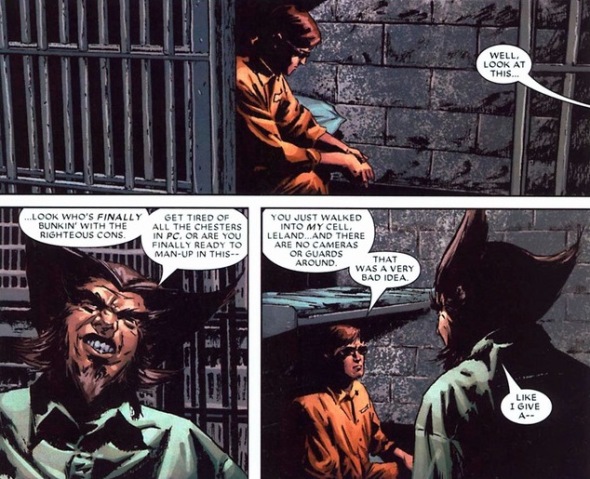 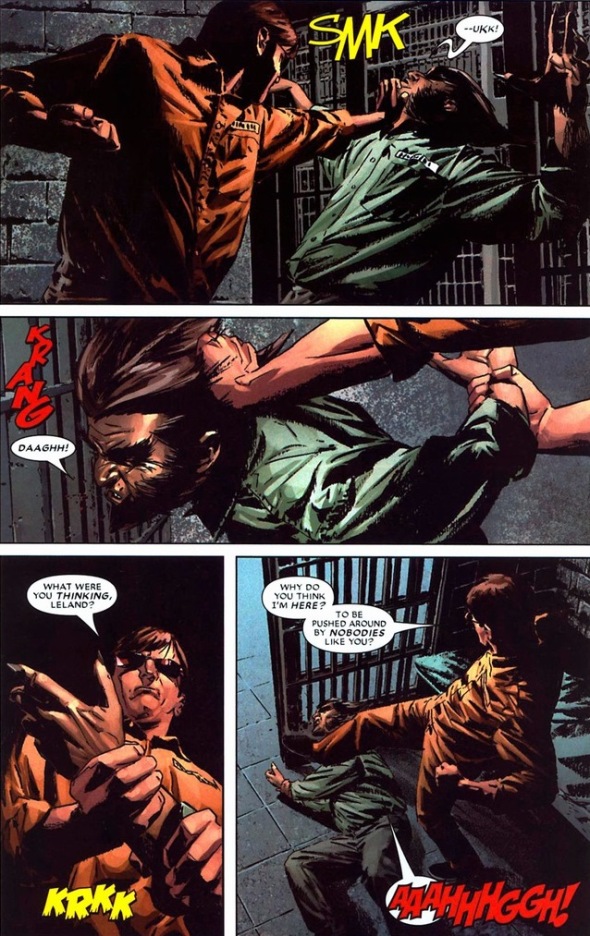 Next, his psychopathic arch-nemesis Bullseye arrives. 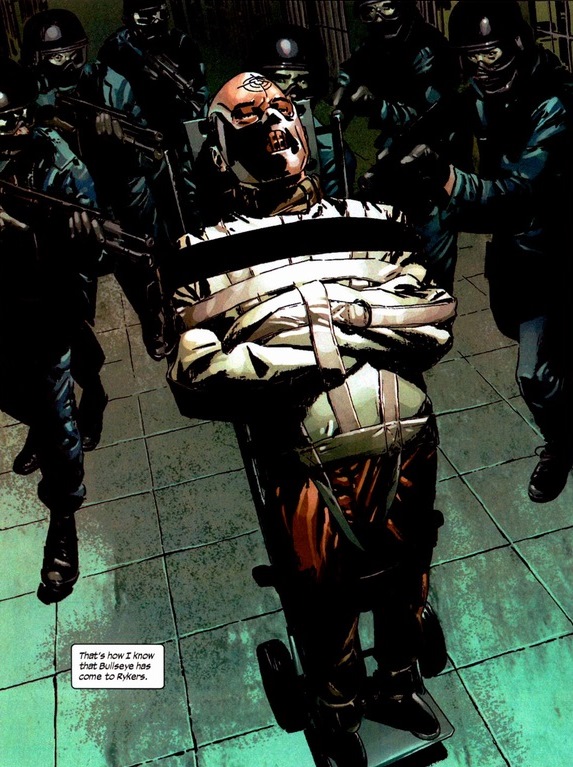 Plus, he spends almost every day fighting for his life.

And finally, the big man himself shows up.

All the decks are stacked against our hero.  You know what would be really nice right now?  Someone at Ryker’s Island prison who wouldn’t enjoy watching the superhero have his guts dragged outside his body.

Y’see, I adore superheroes-in-prison stories.  The man or woman has to use all his or her resources and skills in an unfriendly environment, a closed environment, and with none of the luxuries battles on the street would provide.  Luckily, a few good guys feel right at home in a cesspit of mischief and evil. Like this guy: 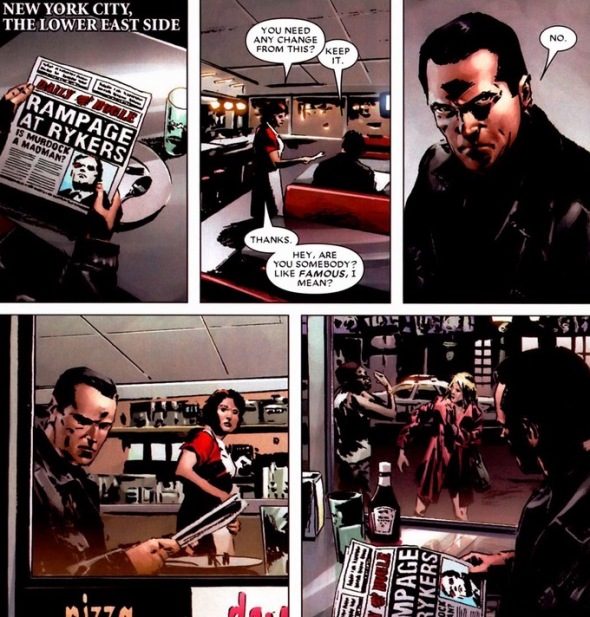 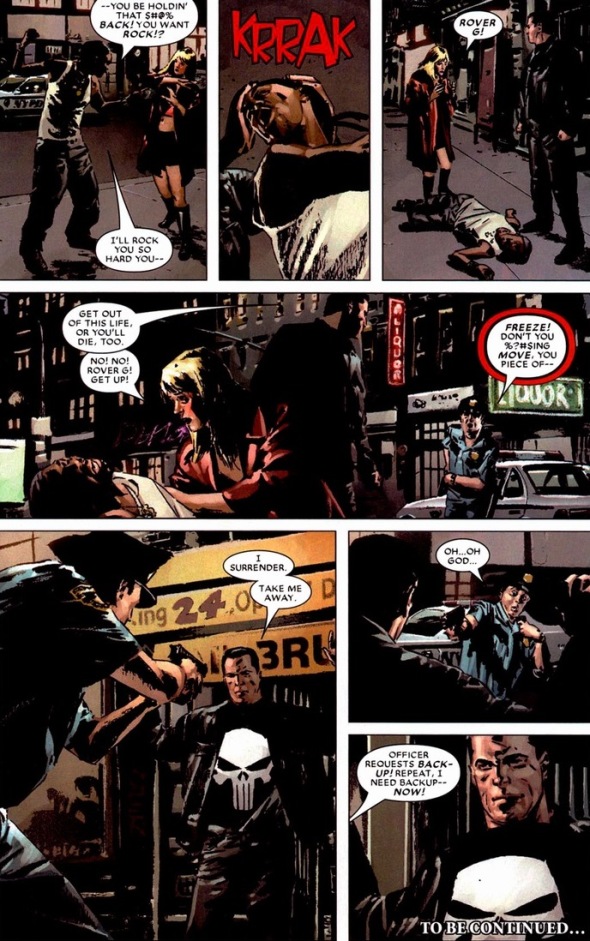 As you may have read in a previous article, Daredevil and the Punisher are not friends.  Actually, I don’t think the Punisher has friends.  But they’re technically on the same side, and Frank Castle gets irked when the bad guys win.  Also, he takes glee in Daredevil’s misery. 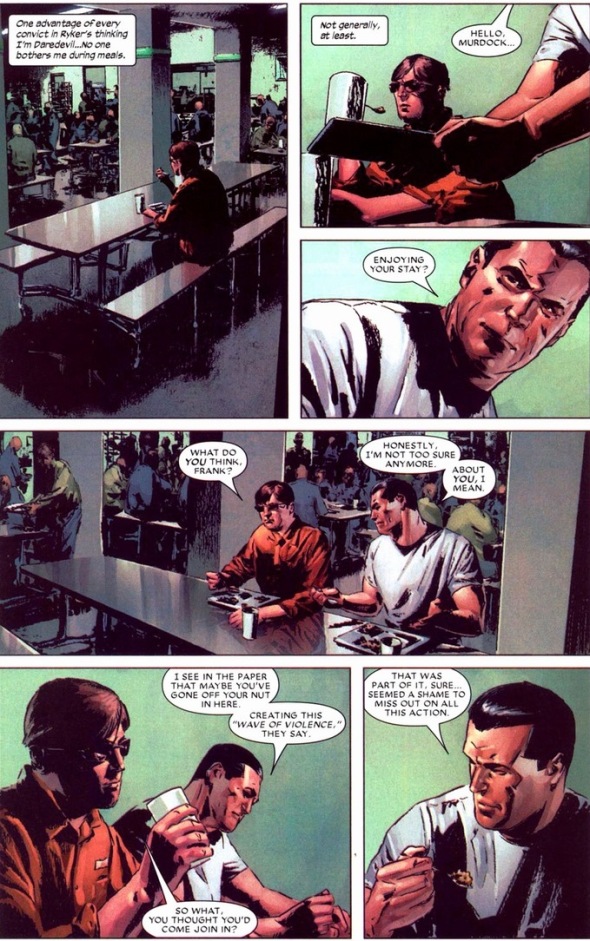 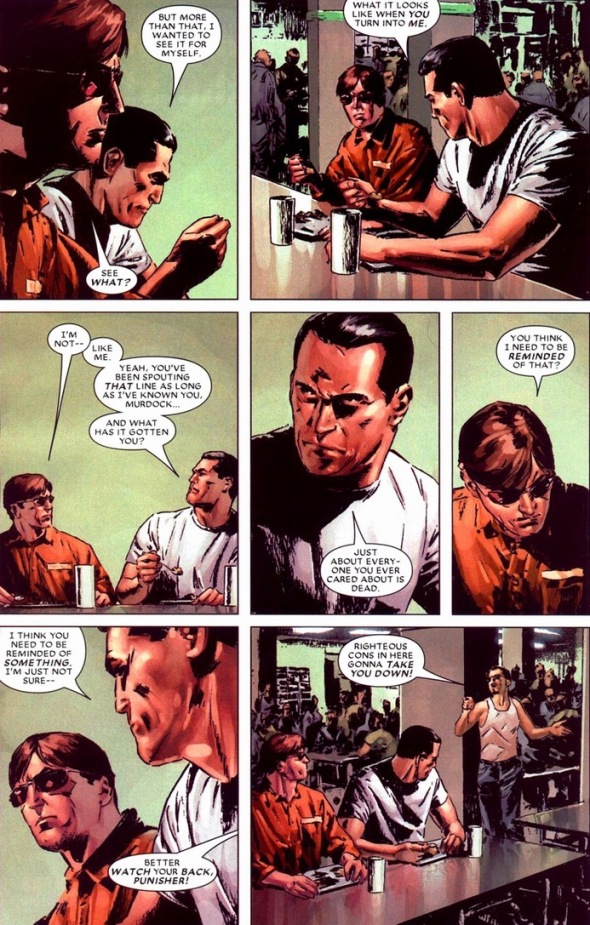 Of course something’s going down.  Riots tend to erupt when Daredevil, Punisher, Kingpin, Bullseye, Hammerhead, Owl, and hundreds of henchmen share the same small box.  But as much as Daredevil hates the other five, he likes being alive more — unfortunately, the Kingpin’ll provide the best chance. Also, the big guy has info on Foggy’s attacker.

Let’s not waste time.  The riot explodes within pages.

After being stuck in traffic on a bridge, jailhouse cop must seriously have the highest casualty rate in the superhero world.  The revolving door for rogue galleries racks up hundreds of guard deaths a year. While the poor hourly employees certainly don’t deserve being disemboweled, what better way to tell readers how evil and dangerous you are than to massacre a horde of normal dudes wielding small firearms?

Murdock still has to deny his Daredevil identity.  A blind man jump kicking a prisoner may not be a smart move, but I guess priorities lie in other places.  Especially once this happens: 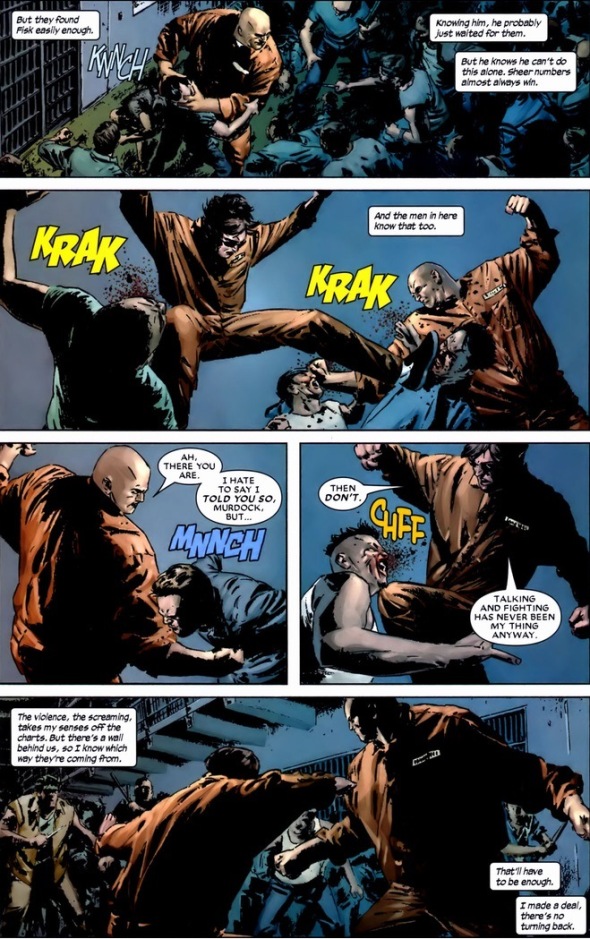 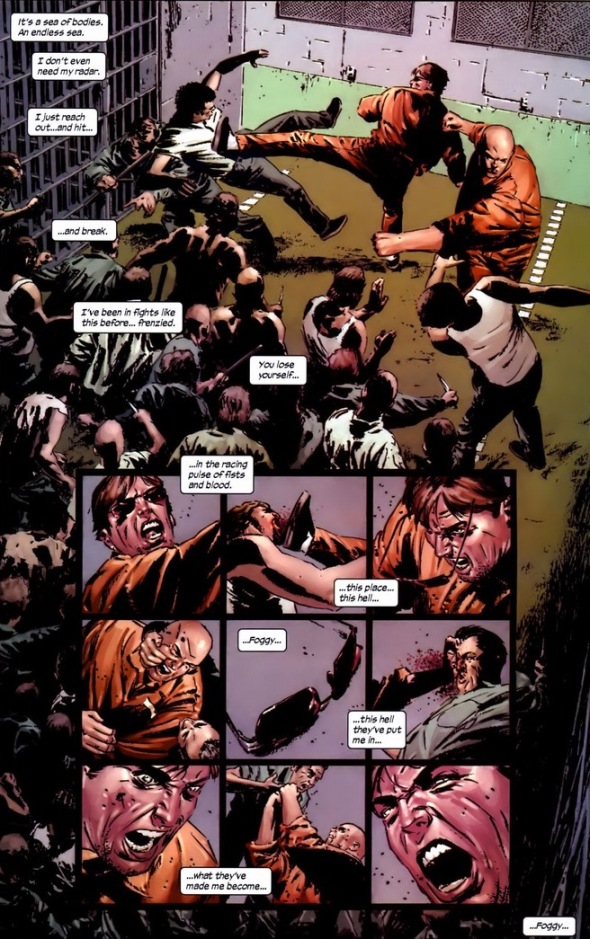 Look, Daredevil’s not above helping the Kingpin of New York escape if it guarantees his own safety as well, but despite his current rage and berserker attitude, Daredevil’s still a good guy.  And Kingpin has to realize that good guys have those pesky moral codes that landed Kingpin’s fat butt in jail in the first place.  So when Fisk decides to bring his favorite assassin into their new dynamic duo, the plan changes. 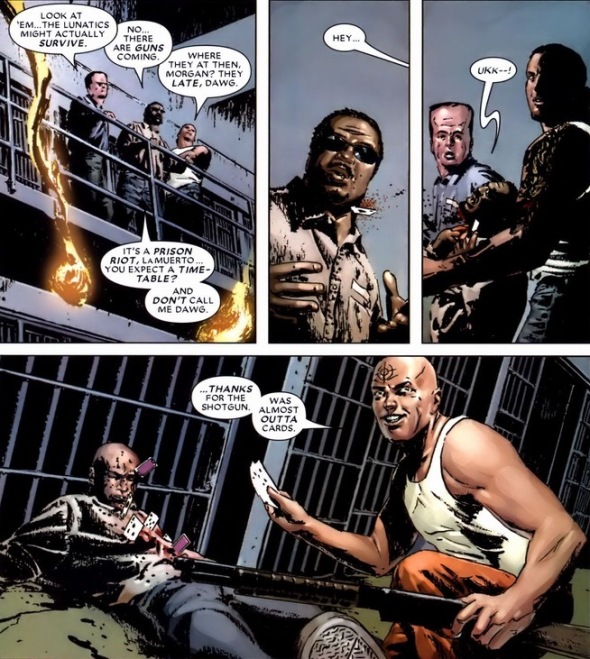 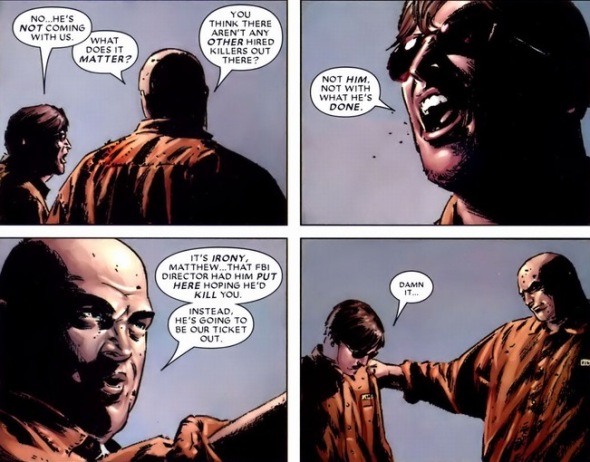 Well, only one choice now. 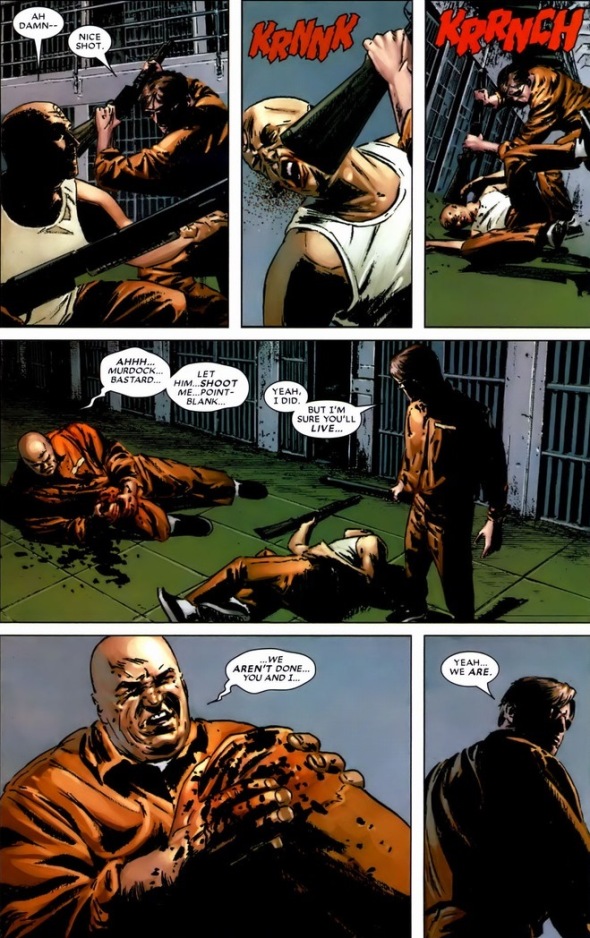 The main issue with abandoning his ride is that Murdock’s blindness kind of prevents him from, say, operating a helicopter..  So, in the obvious move, he stops by his close acquaintance’s cell to tap those ruby slippers back home.  And by ruby, I mean the color of blood and not the birthstone.

While Daredevil still has hordes of problems once he escapes, including that whole new fugitive status, at least his enemies will be further away than the next cell over.

I think the Punisher treats jail time as a sort of spa treatment.  When all that mobster murdering gets too stressful, nothing helps like a stint in the joint to melt all those troubles away.  Though Daredevil and Punisher are still not friends.