Good debates always rely on facts.  Well, this’ll be the opus to my argument I’ve been screaming since I’ve started this blog: Wonder Woman would absolutely slaugter Superman.  She’s just a better fighter.  Not a better role model.  Not a better power set.  But totally a better fighter.  Power Girl will be taking on the Superman role today as she’s an alternative dimension Supergirl (like the Man of Steel without that pesky Kryptonite weakness).  Though you may know her best from her costume possessing that dreaded “boob window” for which I shake my fist at the metaphorical heavens.  Still, Power Girl’s a super awesome character and you should read her solo series that ran from 2009 to 2011.  Or check out a previous article I’m shamelessly plugging. 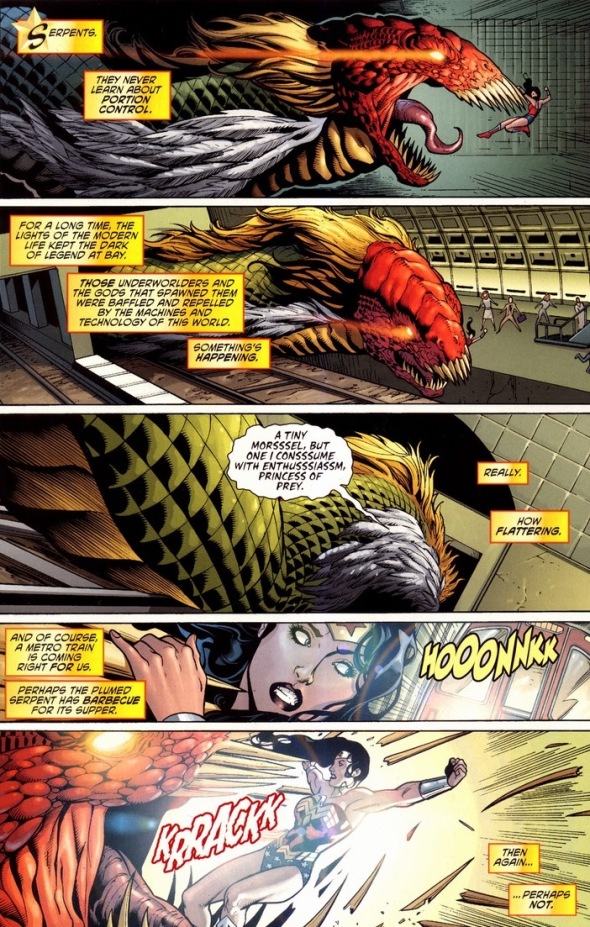 If a gigantic legendary monster doesn’t pose a threat, how hard can Supergirl’s bustier twin be?  The plot revolves around five young boys, the demonic offspring of Ares and unwary Amazons.  They’ll convince Power Girl to wail on our hero through smoke, mirrors, and all sorts of other tricks.  Either way, you’re going to witness an incredible fight between two combatants who don’t wear pants. 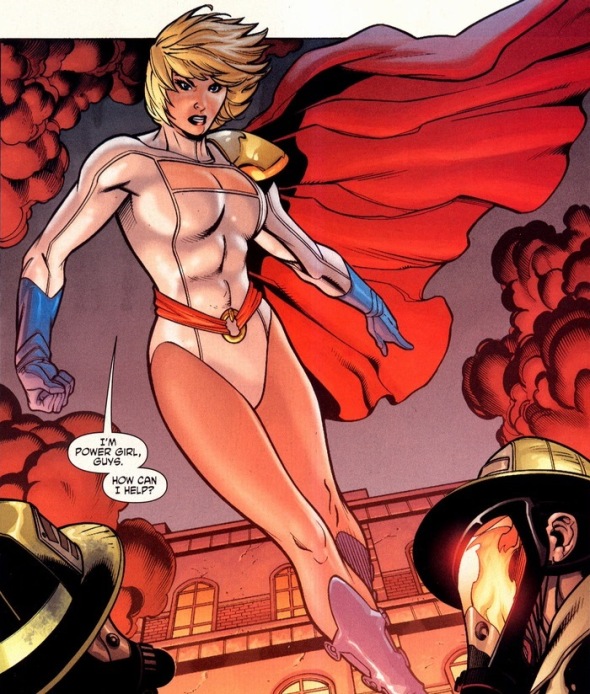 By beating down Wonder Woman, I guess. 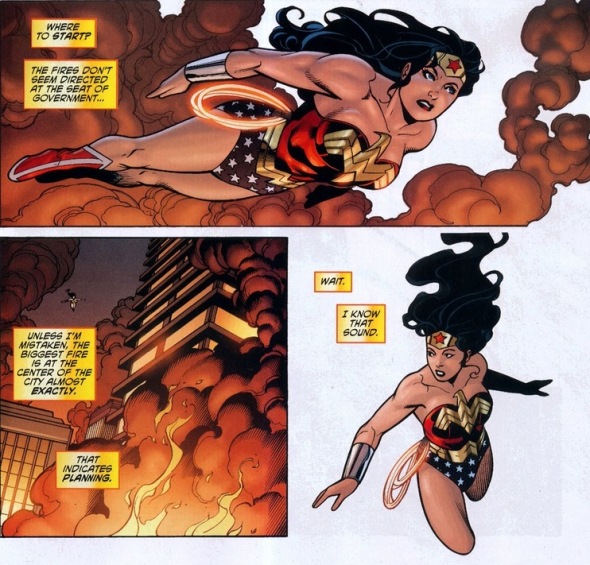 We’re all aware of the power that Superman and his family hold.  Power Girl gets drawn with She-Hulk-esque muscles, and for good reason.  Even Krypto can juggle mountains.  I mean, I figure if the mountain lands on the the tip of his nose and he catches it Air Bud style.  But I think we forget the crazy levels of strength coming from our Amazonian princess.  Not quite the extent of Superman, but she would give him a hell of an arm wrestling match.  She also can’t shoot lasers out of her eyes, but no one’s perfect. 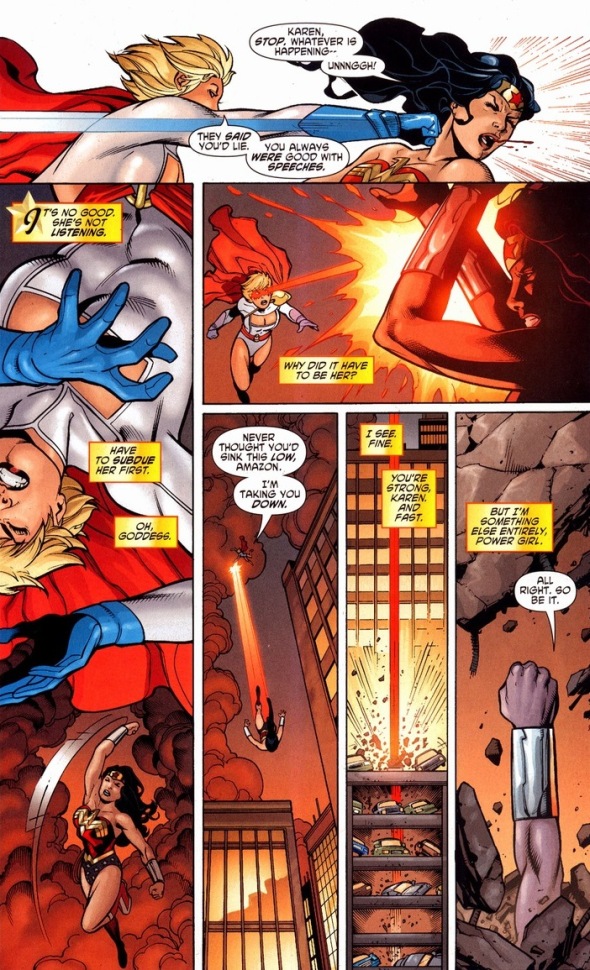 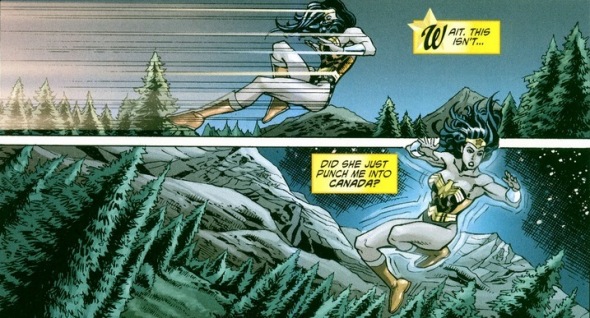 Okay, so not much better.  International smacking is still probably better than flung through a multi-story parking garage.  The only real fault with a superhero versus superhero fight is all those feelings and morality getting in the way of true potential.  Why does Batman stand a chance against Superman?  Mainly because Superman’s too heroic to smush Batman into paste the second he attempts to pull out a Kryptonite batarang.  Holding back and whatnot.  And yes, we totally get some of that — they are superheroes after all.  But Wonder Woman’s compassion is only matched by her competitiveness. 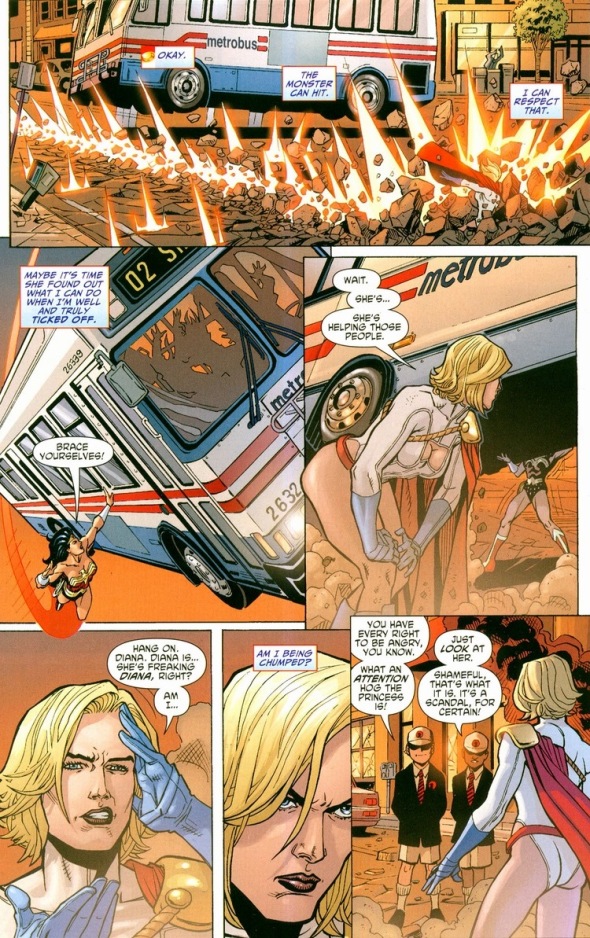 I’m not a woman, but I’ve seen enough Real Housewives to know that women often hate other women for petty reasons, like one being wildly superior to the other.  And when these women can play baseball with city buses, they have the ability to lash out far beyond scratching each other with fake nails.  Also, Power Girl’s biceps are larger than Batman’s.  Narration switches back to Diana halfway down the page.

Superman hasn’t been trained in combat since the day he came out the womb.  Sure, Batman gave him the basics, but it can’t make up for the sheer talent and skill the princess of Themyscira wields. And that, my dear readers, will consistently trump Superman’s crazy power.  Though if instead of combat, they had a farming or reigniting the sun competition, he would totally take gold. 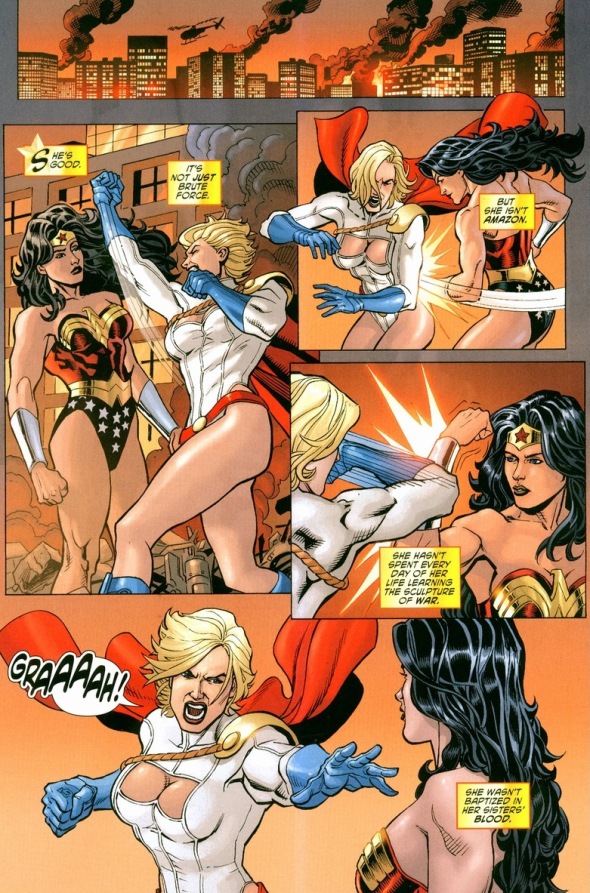 Wonder Woman always wins with grace and respect, and that’s probably why all the other women hate her.  Afterward, the two team up to defeat the Ares kids, because friends rarely punch their friends into Canada.

So that’s why she has a boob window — to avoid mustard stains.