The love part of our story has long since ended.  The two aren’t so much exes as bitter, vengeful monsters that prey on trust to deliver fatal emotional blows.  Well, the blue one anyway.  Today, we check out X-Men: Manifest Destiny #1-5, written by Mike Carey and drawn by Michael Ryan, that forces us to recall when Mystique delicately placed neural inhibitors in her lady parts to defeat Iceman a few issues later.  His problem’s flaring up again, like a robot STD. 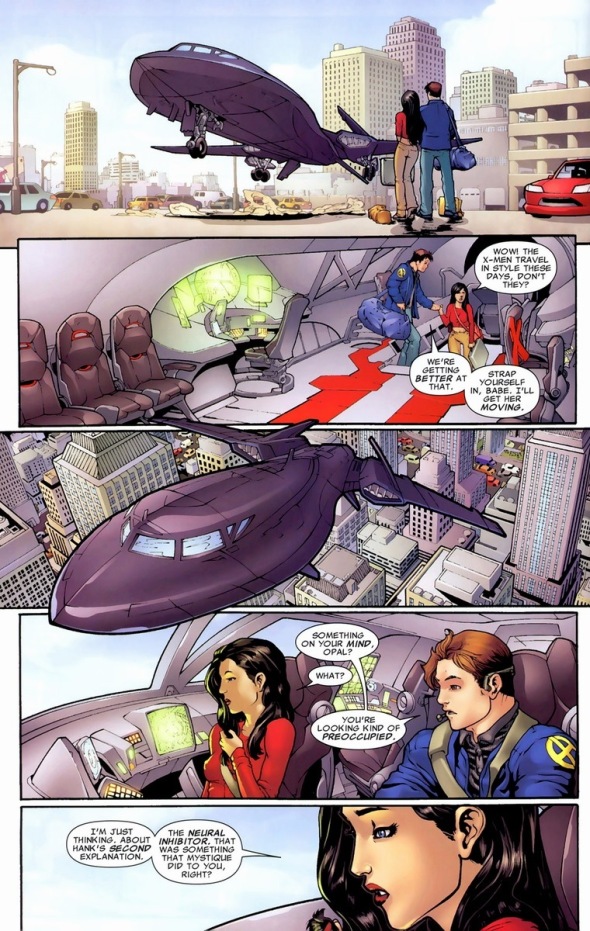 At least this time Iceman has a loving and caring girlfriend by his side.  It’s a delicate time in his life to be eradicating Mystique residue from his body (and memories), but what could go wrong here? Certainly not months of planned relationship building serving only to heighten the sharp pain of another broken heart, right?

He doesn’t deserve this.  But you know the whole deal with supervillains — even their good intentions are caked in murder, deception, and trauma.  And by good intentions, I mean to turn their targets into unfeeling lying murderers.  Mystique, despite being born in the late 1800s, still hasn’t evolved past that idea.  Anyway, Iceman survives, though not for much longer at this rate. 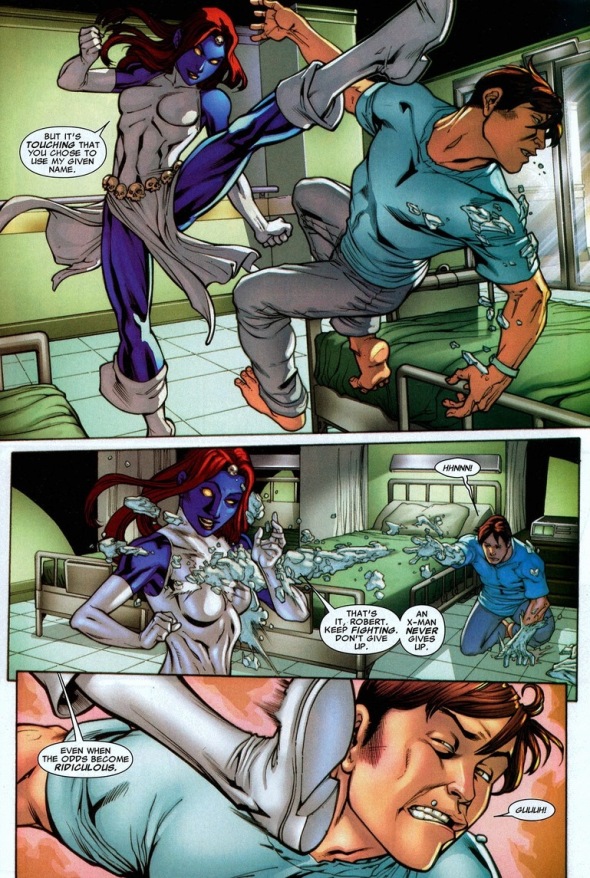 What’s she want with him?  Something villainous to pass the time mainly, but she does claim all this nonsense and life-ruining in the name of science.  Unwilling and non-consensual science. 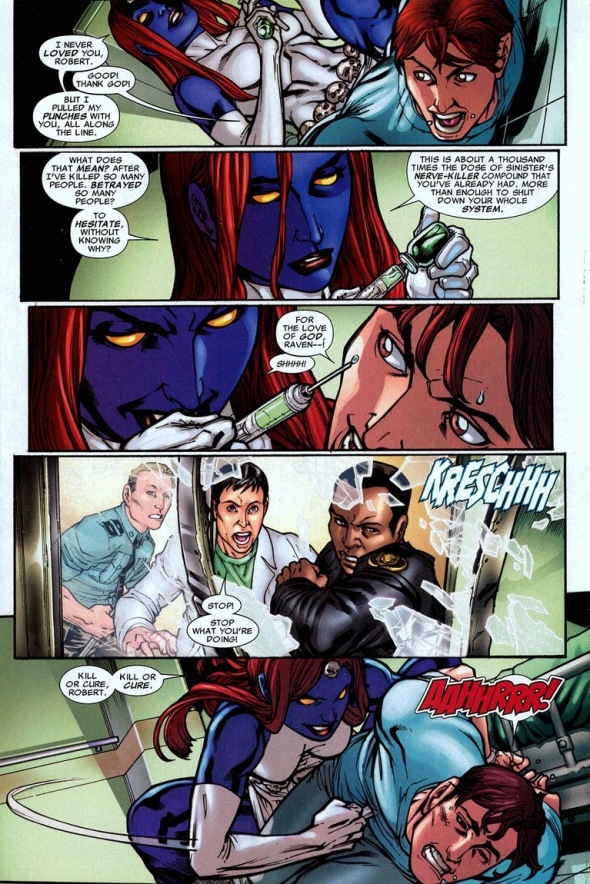 Over the past decade or so, Iceman has evolved into a phenomenal powerhouse.  He’s practically invulnerable, able to splinter himself into different bodies, and may very well qualify as a top level Omega mutant.  Y’know, the mutants with unimaginable power like Jean Grey, Vulcan, Franklin Richards, etc.  She’s attempting to either callously push Bobby Drake to his full potential or kill off a man she showed weakness in front of.  Either one fits her usual M.O.

Oh, he also survives the syringe.

It’s probably not a good strategy to rely on Mystique tapping into her sentimentality.  She’s legitimately a psychopath, and no amount of nostalgia or good vibes will allow her to release the trigger.  But remember that whole thing about Iceman being crazy powerful? 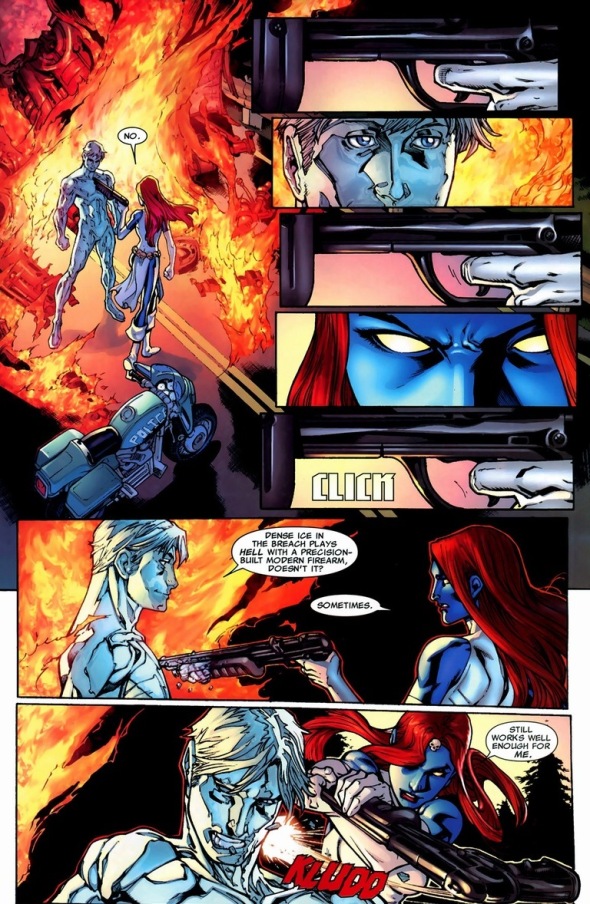 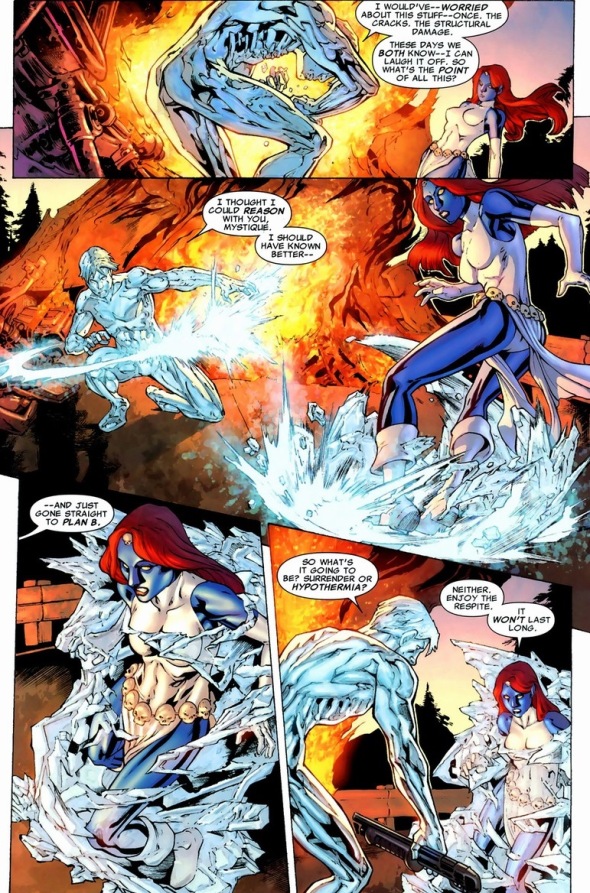 Iceman follows a fairly standard Marvel personality protocol: despite amazing superpowers, superheroes’ biggest enemies usually ends up being themselves.  Self-loathing, guilt, anger, mistrust, doubt, etc.  Mystique figures she could give Iceman that confidence he so sorely needs.  It’s what has held back his powers for all those years and allows him to keep his frustrated school boy persona.  Iceman may be many things, but mature isn’t one of them.

Look, no matter what the nursery rhyme says, words hurt.  Sometimes far more than ice beams and gun shots can.  Because while Mystique leaves this fight physically unharmed, Bobby unleashes a kung fu blast right in her cold, dead heart. 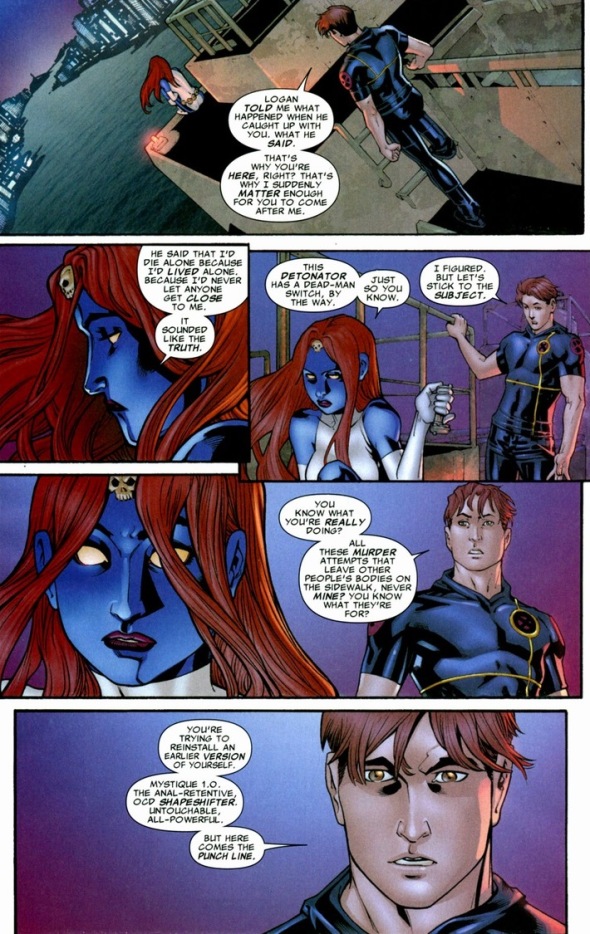 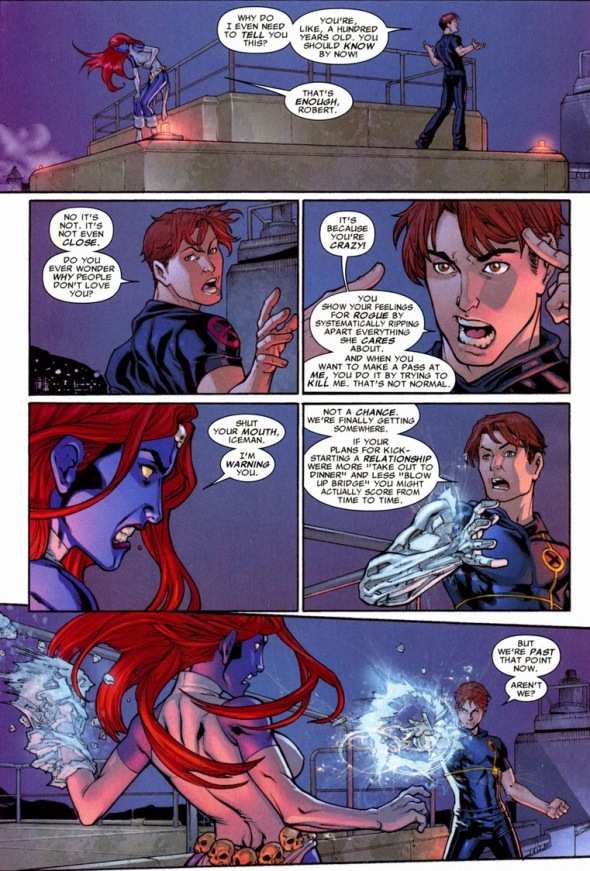 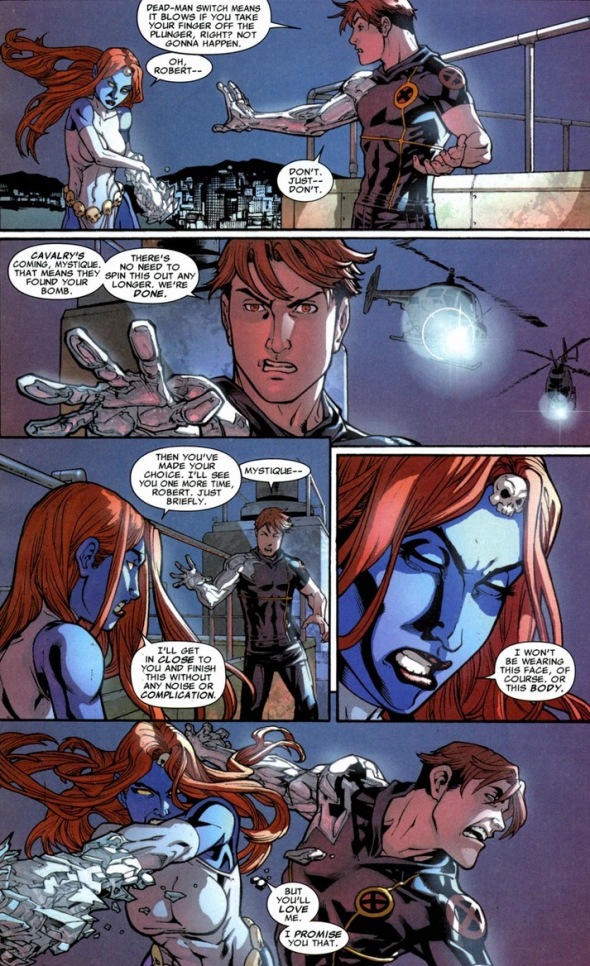 Luckily, if you agree with Iceman’s diagnosis, then you experienced a delightful burst of character development for our shapeshifting supervillain.  If you believe Iceman’s talking out his butt, that’s fine too; it’s only his opinion and not the opinion of Marvel or any of the wildly angry fans that yell from YouTube videos — though personally, I agree with Iceman.  And that brief moment of revenge she promises?  That’s for Monday. 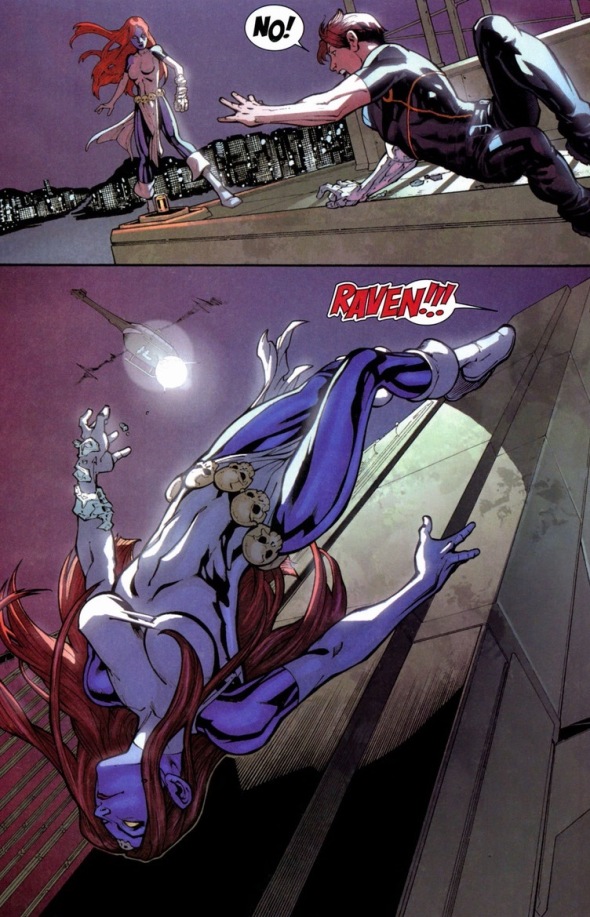