After Electro’s sob story/childhood recall from last article, it’s time to see our newly enhanced supervillain in action.  Spoiler alert: it’s going to be shocking (I apologize, I won’t do that again).  We keep forgetting that Electro has one advantage that many baddies don’t get: he’s fighting Spider-Man.

Batman, who spends his days inventing batarangs that dispell everything from toxic waste to magic spells to deadly diseases, has a whole belt full of gadgets for practically every power combination or skill he comes across.  Then you add his martial arts and a dozen teenage sidekicks.  But Spider-Man, despite his superpowers, swings around the city packing only web-shooters and a thin layer of spandex.  So when Electro shows up blasting sparks (both physical and emotional) with a level that Spider-Man hasn’t dealt with before, our protagonist’s only secret weapon is praying for a lucky punch. Though to be fair to Spider-Man, he does have the super strength to punch through Electro’s chest and rip out his electrified heart if he really wanted to.  Too bad he won’t.  Check out their first fight in Amazing Spider-Man #423, written by Tom DeFalco and drawn by Joe Bennett.

And if that’s not enough, Spider-Man’s going to have to multi-task. 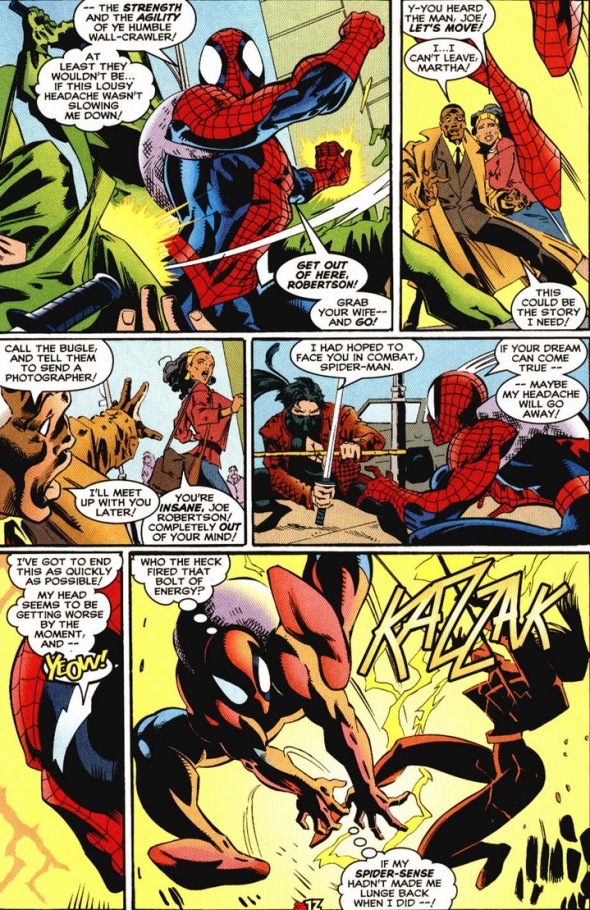 Marvel universe henchmen come in three varieties: terrorists, thugs, and ninjas.  For a planet with thousands of superpowered people flying around smacking each other with laser eyes, the normal citizens have to also avoid hordes and hordes of ninjas jumping around the city tossing shurikens or whipping nunchucks.  How anyone in superhero worlds doesn’t just live in constant paralyzing fear will always perplex me.

Rehabilitation doesn’t exactly work in the Marvel universe.  The status quo demands those that attempt rehabilitation fall back into the same evil tendencies they once experienced.  And my goodness, have they tried.  Sandman (at Thing’s urging) and Doctor Octopus (poor Superior Spider-Man) all saw everything moral and generous they accomplish sink back into that pit of supervillainy they’re doomed to return.  As Electro’s whole life revolves around him being not good enough, you can imagine his greatest foe taking pity on him hasn’t soothed the decades of emotional damage.  Spider-Man’s going to fry.

I know in this moment, we look forward to Spider-Man mustering up the last of his strength and prevailing over his stronger foe.  There’s a primal and societal joy in seeing our heroes take down evil. But y’know the introduction I wrote before we got to the comic?  Spider-Man has no new weapons, no new tricks, and no allies to support him — his current options have shriveled up faster than his nervous system.  All of Electro’s wishes come true. 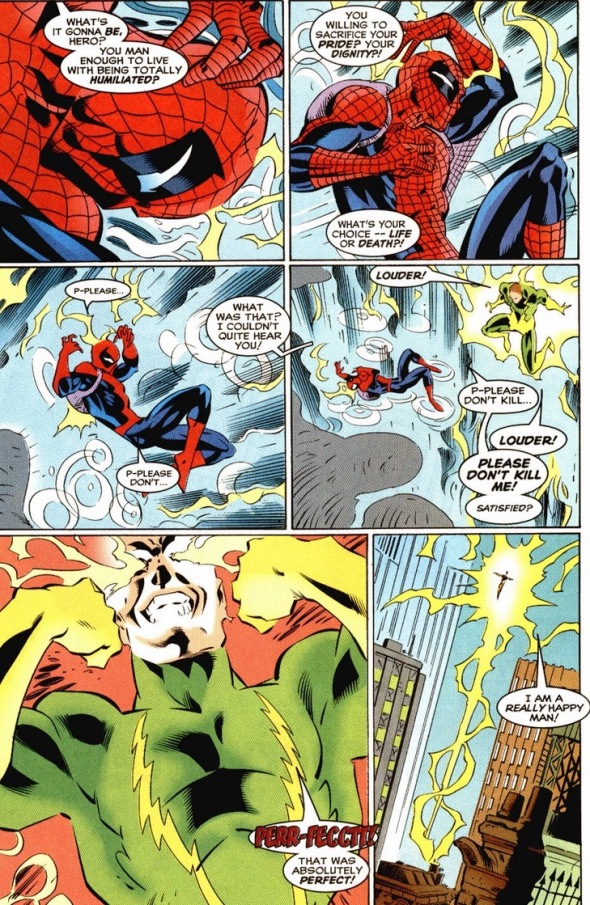 Of course Spider-Man made the right choice.  Part of the cost of being a superhero means sacrificing pride for the greater good.  But on Friday, he’ll be going full-Batman.  Spider-Man’s going to kick Electro’s ass.