After Spider-Man’s embarrassing loss on Wednesday, he has some serious self-reflection to do.  I mean, not too much because of an insane supervillain prowling the streets that desperately needs a punch in the face — but dear Peter Parker realizes the hard way that webs and kicks alone won’t take down this newly enhanced Electro.  Luckily, he’s also a super genius, and that helps him tremendously in Amazing Spider-Man #425, written by Tom DeFalco and drawn by Bud LaRosa.  But first, Electro:

I know there’s a typo in the third panel on the first page, but let’s chalk that up to Electro’s lack of a quality education.  More importantly, Electro does make a good point.  The dude’s kind of a joke. He doesn’t get the respect that Green Goblin and Doctor Octopus get, and even at his best, he’s only used as muscle for the Sinister Six.  While he lacks the ability to instill fear, at least his emotional instability matches the level of Green Goblin and Doctor Octopus.

Meet Nate Grey, an alternative teenage version of Cable.  He goes by the superhero name X-Man, which is honestly just his job title.  X-Man is a singular version of X-Men.  It’d be as if I fought crime as Blogger.  Plus, like all great superheroes created in the 1990s, X-Man has the power set of an roster of Avengers.  He possesses molecular manipulation, telepathy, telekinesis, precognition, flight, force fields, invisibility, healing, intangibility, dimensional travel, reality warping, physical possession, and he can even stop time.  Yes, that’s just one superhero’s powers.  Nowadays, he only has telekinesis, presumably after writers realized one mutant can’t have every superpower every created.

So to even up the odds, Spider-Man asks Nate Grey to help him.  And remember Electro’s plan to build up his evil reputation?

Well, time for Electro to realize the mistake he made mocking Spider-Man.  Peter Parker never gives up after a smackdown, complete with eight or nine new ideas for round two.  Say goodbye to Electro and any hope he has of making it to the A-list.

Okay, so it’s going to be harder than we thought.  Too bad Nate Grey’s going to take a beating now that Electro’s finally gotten around to reading a science textbook.  Even the strongest psychics have difficulty fighting opponents with enough power to incinerate an entire city block.  And I mean that literally: 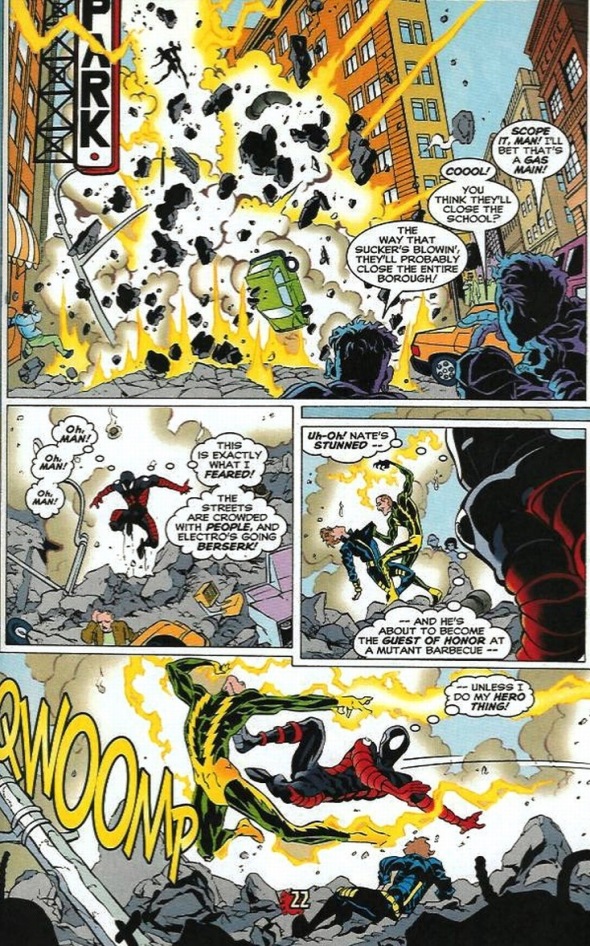 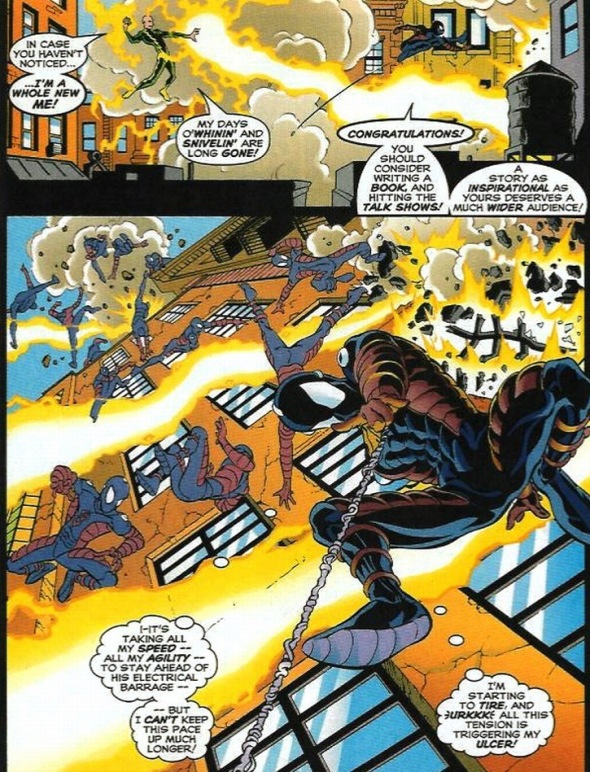 This issue’s double-sized and their fight takes up the whole issue.  I’m having to skip chunks of their battle to fight off my own arch-nemesis (copyright laws), but it mostly involves Spider-Man desperately attempting different tactics hoping to slow Electro down.  Unfortunately, electricity moves at the speed of light.  And you should buy this issue because it’s an awesome battle.

Understand that despite Electro’s crazy electrical powers, he still only has a normal person’s durability.  A rock thrown with super strength has more than enough force to concuss Electro.  Though not for long. 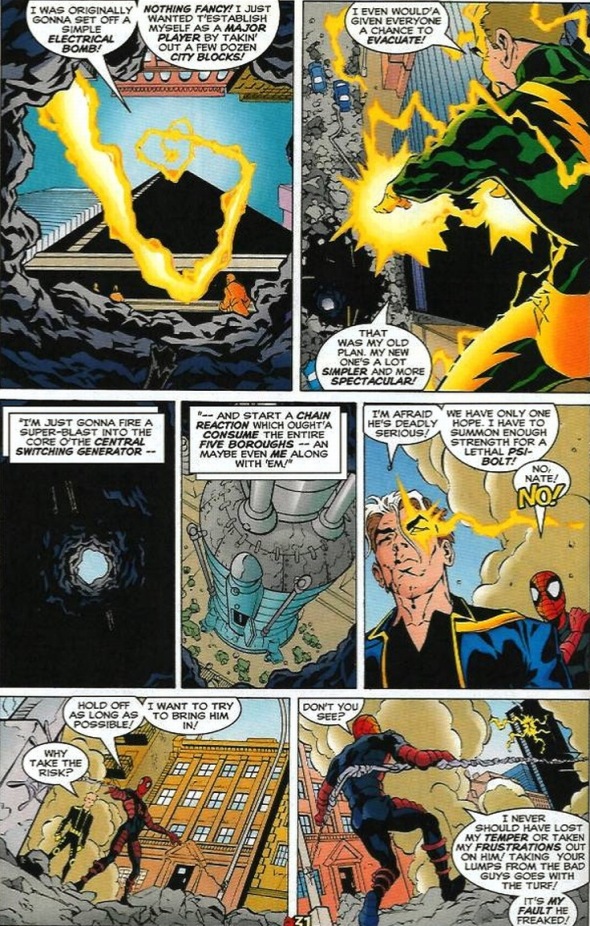 Sure, you can poke a bear a few times.  But it’ll eventually maul you and the rest of the zoo.  Y’see, Electro just wanted to show off his new skills, but with wild insecurities revived by Spider-Man’s unnecessary beatdown, poor Electro has to switch from mayhem to mass murder.  After all, that’s what Green Goblin and Doctor Octopus would do.

We forget that behind Spider-Man’s jokes lies the moral center of the Marvel universe.  No matter how much pain and suffering it’ll cause him (and my goodness has it), Spider-Man has to do the right thing.  No discussions, no gray areas, no justifications.  Great power, great responsibility — y’know, everything we admire and love about superheroes.  That and all the punching. 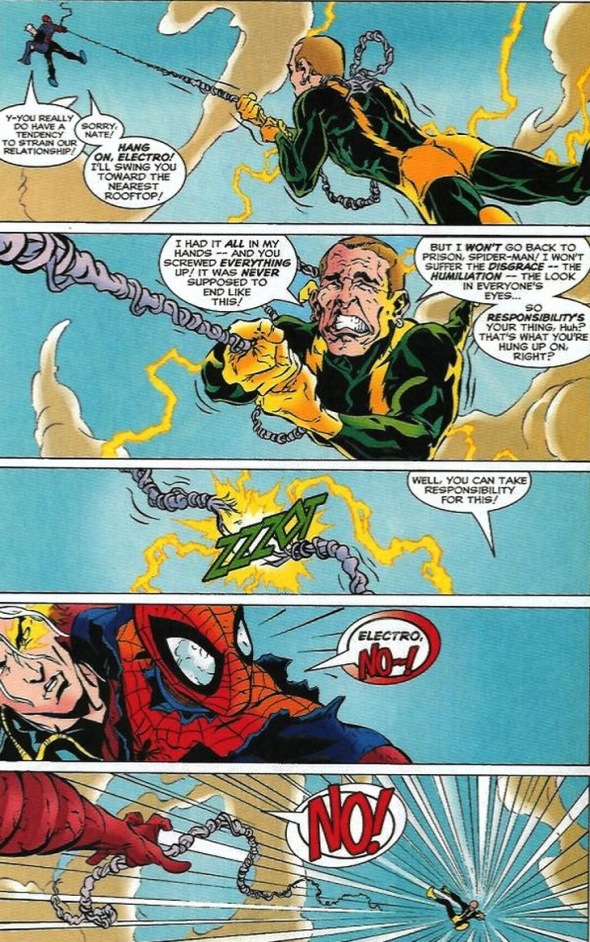 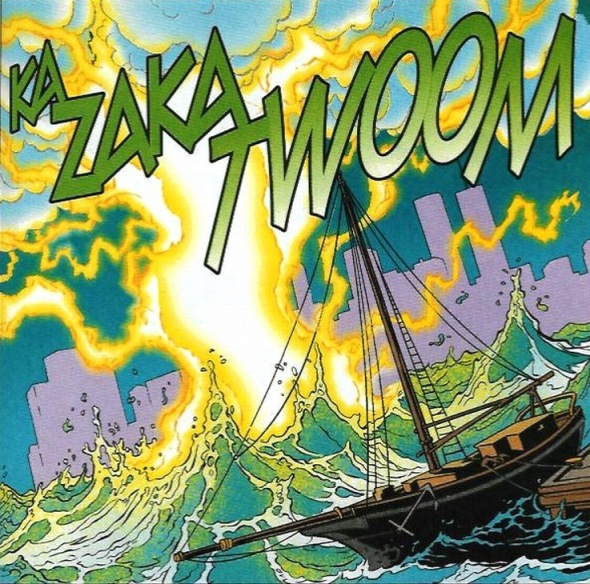 Electro returns dozens of times after this.  But despite his humiliating loss, it’s nice to see downtrodden supervillains reach a level where they have to be taken seriously by their local superhero. Let’s hope Shocker gets this treatment next.