The friendship of X-23 & Jubilee

X-23 spends most of her solo series slashing and moping.  That girl may be many things, but happy isn’t one of them.  It sorta comes with the territory of being a Wolverine clone.  Well, that and the test tube birth and being raised since birth to be a merciless killer child.  So now that she’s free of all that evil lab experiment Winter Soldier-esque stuff, dear X-23 (real name Laura Kinney — kind of) has the task of forgiving herself, picking up all those shattered self-esteem pieces, and figuring out her new path in life.  And shaving her back — she’s a Wolverine clone after all.  Gambit accompanies her on her find-herself journey and today in X-23 #10-12, written by Majorie Liu and drawn by Sana Takeda, our cajun role model figures maybe she could use a pep talk. 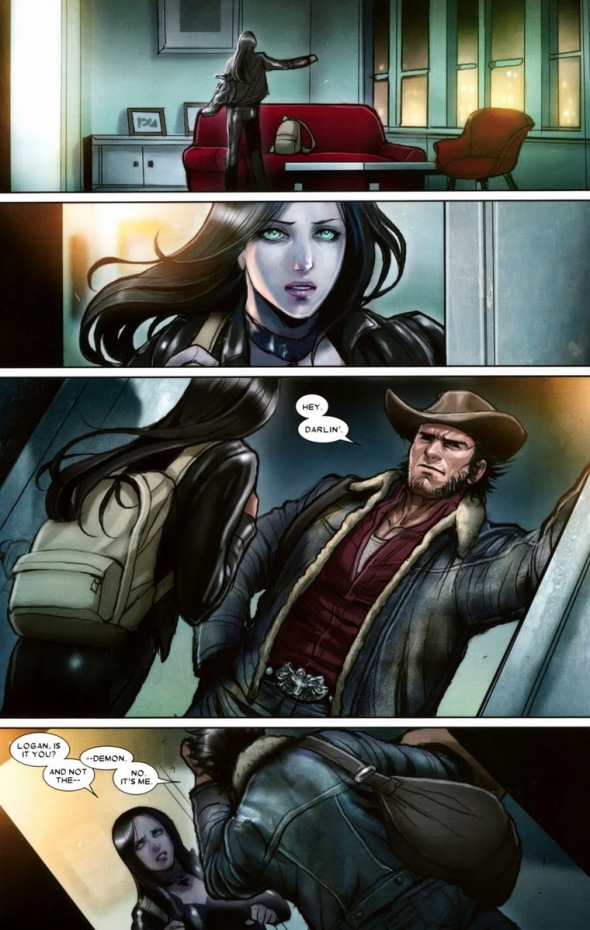 See Laura’s slash-first-ask-questions-later policy?  What better proof do you need that she’s Wolverine’s clone?  He claws dudes for ordering light beers at bars, much less possible vampire attacks.  But Wolverine showed up not just to force Jubilee on her — possible friend her age and whatnot — but for that brief moment of sage advice a fellow Wolverine can bring.

The point Wolverine attempts to make to girl Wolverine lies in our two protagonists teaching each other.  Jubilee needs to learn how to calm her newly spawned killer instincts and X-23 must learn how to not be a sad sack every moment of her life.  By the way, because there’s no other place to put this — the two will meet again in the penultimate issue of X-23 and they go dancing at a club.  Jubilee still has her famous yellow raincoat on amid all the rave lights and attractive people grinding, so my only conclusion is that’s part of her skin now.

Oh, and now X-23 does some questionable. 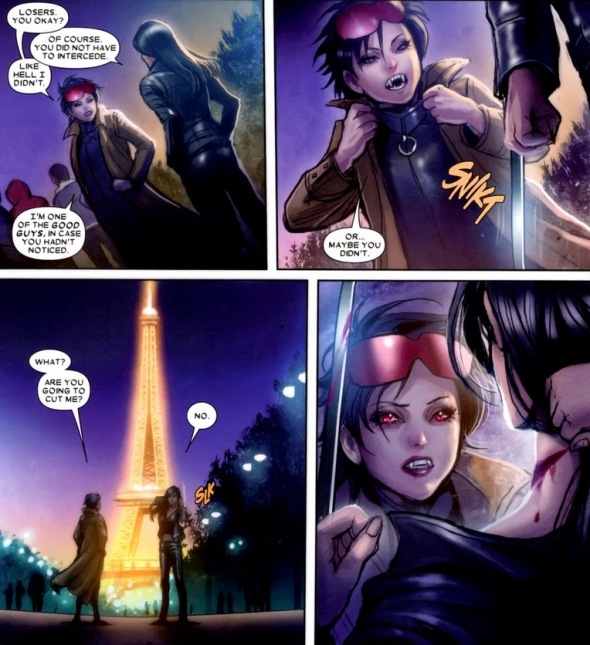 Aside from X-23’s recent attempted suicides (healing factor can’t really kill her, so it’s more of an emo teenage girl cutting scenario), her sacrifice serves a greater purpose.  For one, she can’t turn into a vampire due to her being a Rule 63 Wolverine.  But because the Marvel universe can bend the rules on the limitations of mythical monsters, every vampire bloodsucker also absorbs the memories and thoughts, like a creepier version of Rogue.  Or maybe just her.  I’m not an expert on this. 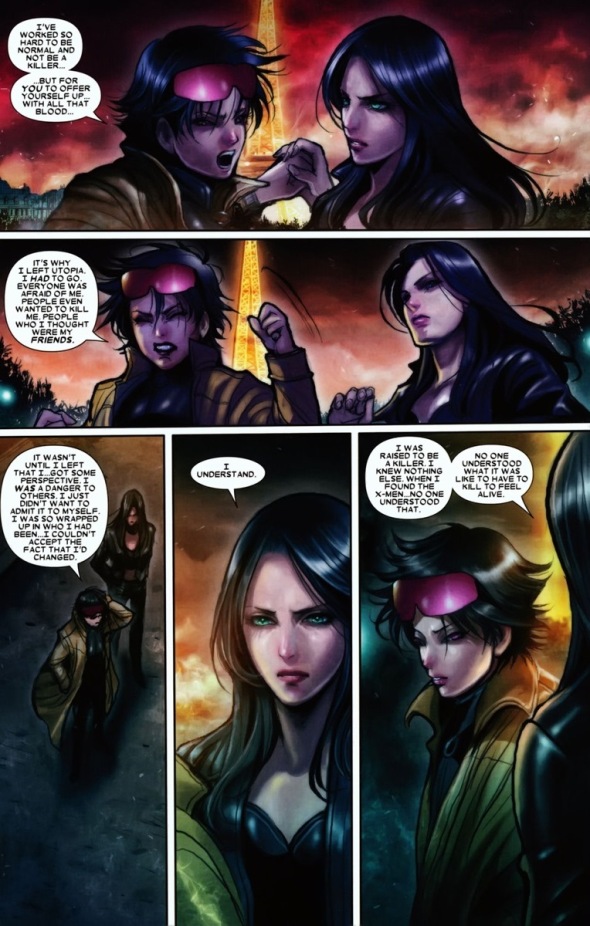 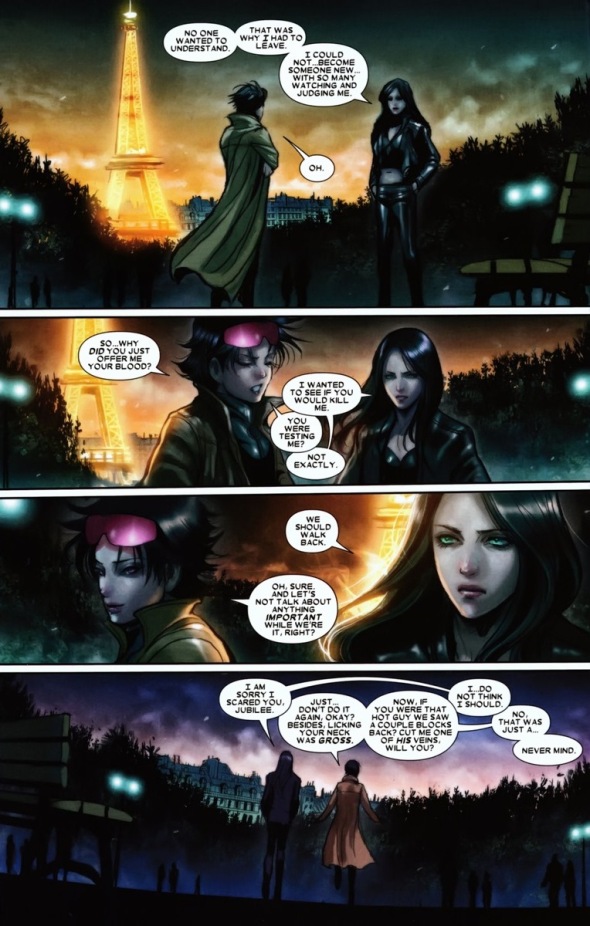 While X-23 has the the PTSD childhood that would make the sternest therapist cry, she makes a good point to Jubilee while simultaneously knocking off any possible responsibility for the lesson.  X-23 totally understands the desire to kill everyone, that’s pretty much her whole gimmick.  It’s good for both of them to have someone relatable to hang out with.  Wolverine spent decades perfecting his zen — accepting and forgiving his past mistakes — something teenage girls can’t do with a wrong number text much less a former murder spree.  But since we’re reading a superhero comic, we’ll soon get to an incident that requires superhero intervention.  Though first, dress shopping: 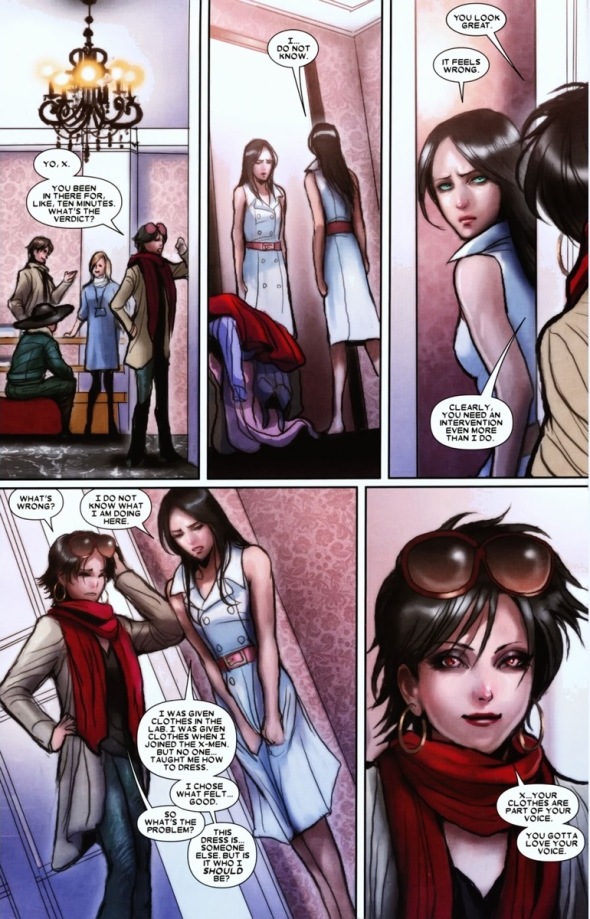 And now the superheroics:

Let’s talk about trigger scent for a minute.  You know how Wolverine goes into his “berserker mode” anytime someone hits him with a bazooka or smokes his last cigar?  That primal attack-everyone-aiming-for-squishy-parts with his loved ones screaming for him to stop?  The scientists who created X-23 developed a gas that causes the same reaction to her, and as you can suspect from the massive foreshadowing above, our protagonist inhales a whole crapload of that stuff.  Here’s Feral X-23 vs. Vampire Jubilee: 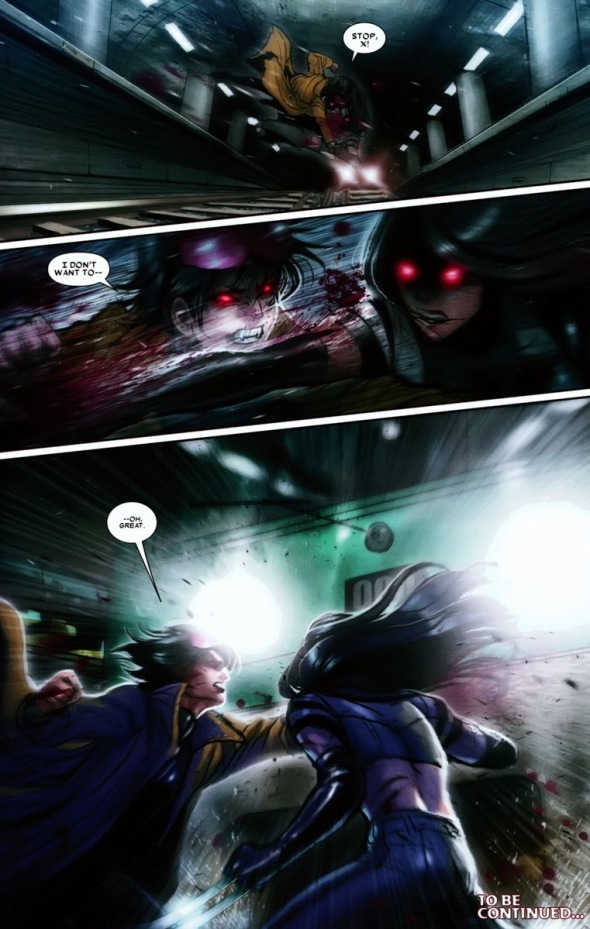 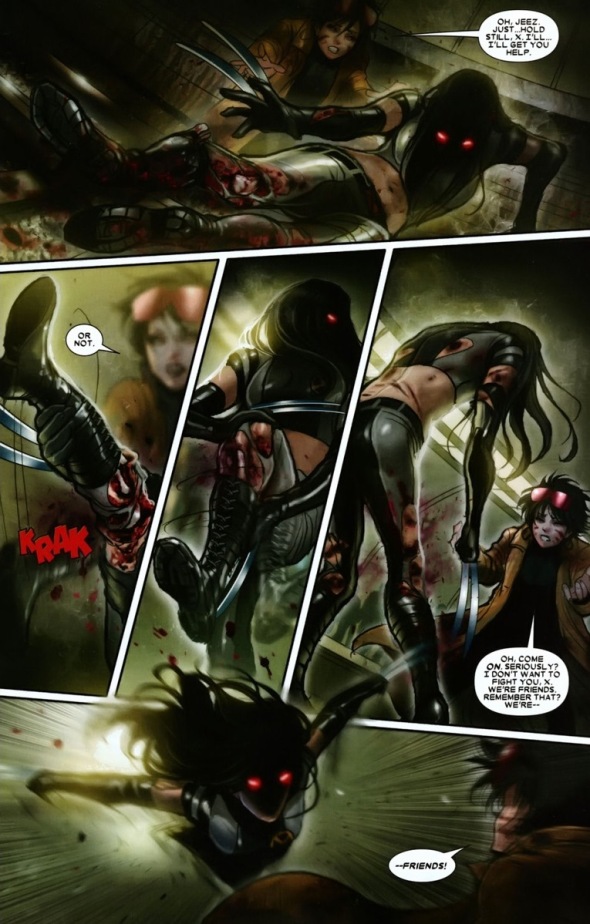 Jubilee can’t beat X-23.  Sure, the vampire blood makes her faster, stronger, and more undead than Laura, but X-23 has adamantium claws and a lifetime of combat training.  Luckily, the adults won’t let children slice open other children, much like myself when I taught middle school.

Happy ending for all except Wolverine’s kidney.  Jubilee feels a fraction of a bit better for her predicament and X-23’s about to receive her own marginally improved emotional stability from our dear mall rat.  The irony in Jubilee being undead is that no one enjoys living more than her.  A zest for life that can only be brought from (formerly) shooting fireworks from your hands. 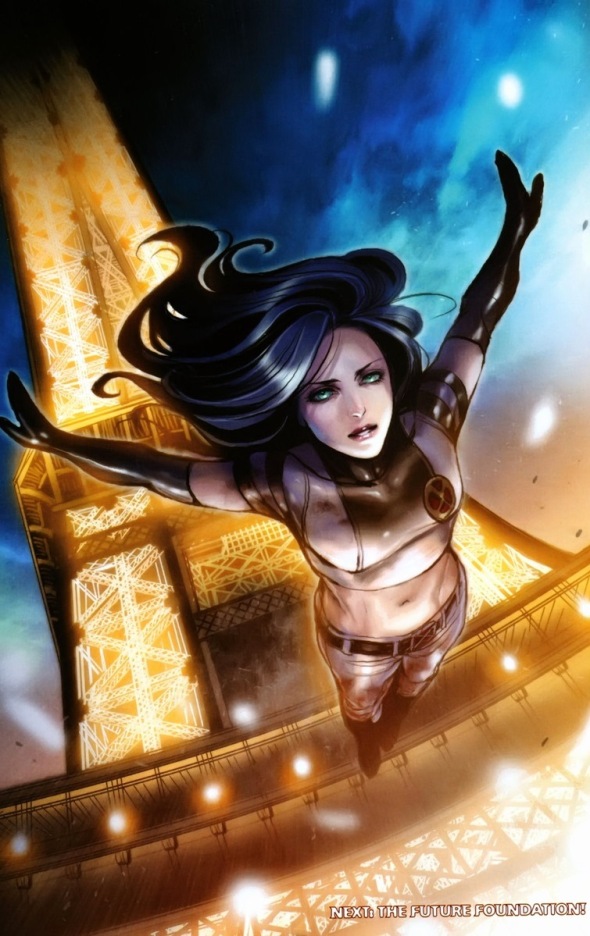