Jubilee turns into a vampire, Pt. 2

As we left off on Friday, Vampire Jubilee and Vampire Wolverine put a hamper into the X-Men’s plan to defeat this undead enemy — and also have none of them turn into vampires.  Sadly, that solitary neck chomp also brings it with an evil personality devoid of all the good stuff that sunshine, puppies, and such provide.  Well, Cyclops won’t stand for it.  Remember his new ideology of the X-Men being less of a school and more of a highly-trained heavily fortified army? 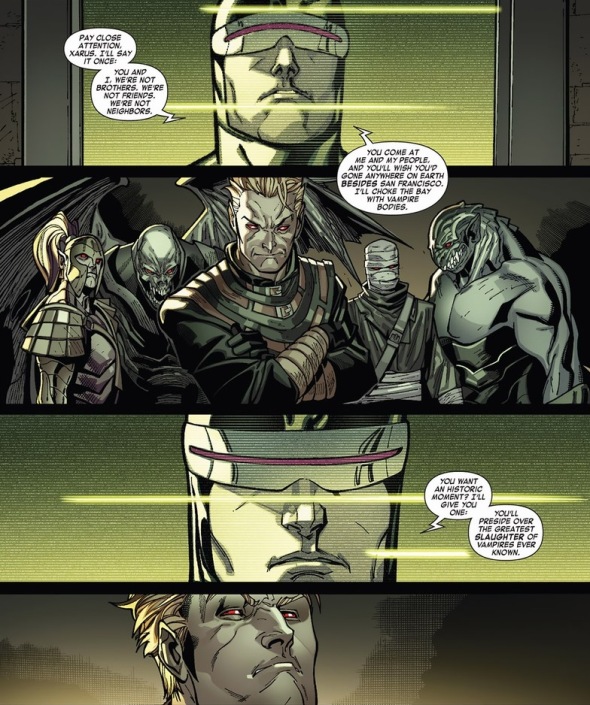 Bad guys don’t listen to the threats of Ol’ Laser Eyes (whose eye lasers are not compressed energy but instead portals to a universe that doesn’t follow the laws of physics — or something like that). Plus, Cyclops hasn’t smiled all arc.  Masterminding the potentially greatest slaughter of vampires ever known can be quite stressful.  But Xarus, being a traditional supervillain who doesn’t realize that the superheroes always emerge victorious, attacks the X-Men base Utopia with the full vampire force because he has to learn his lesson the hard way. 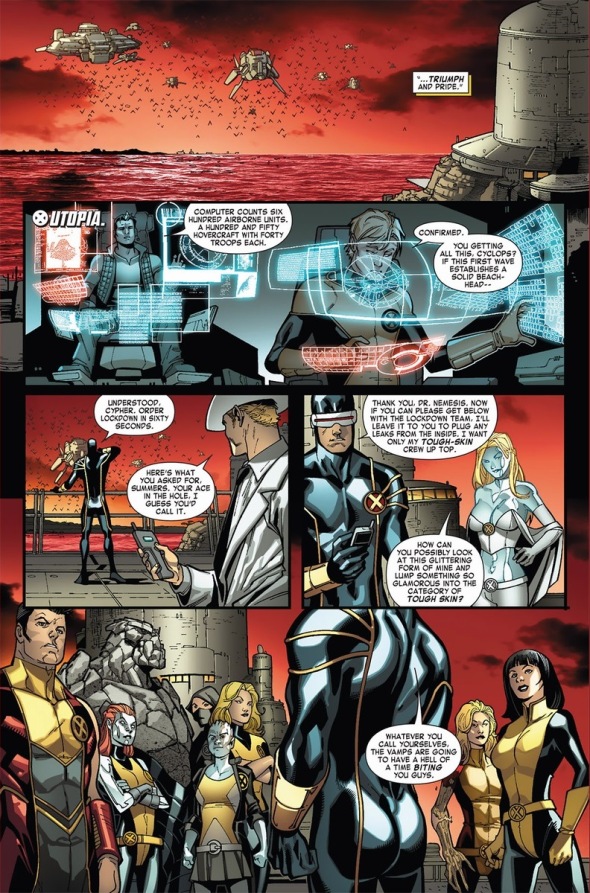 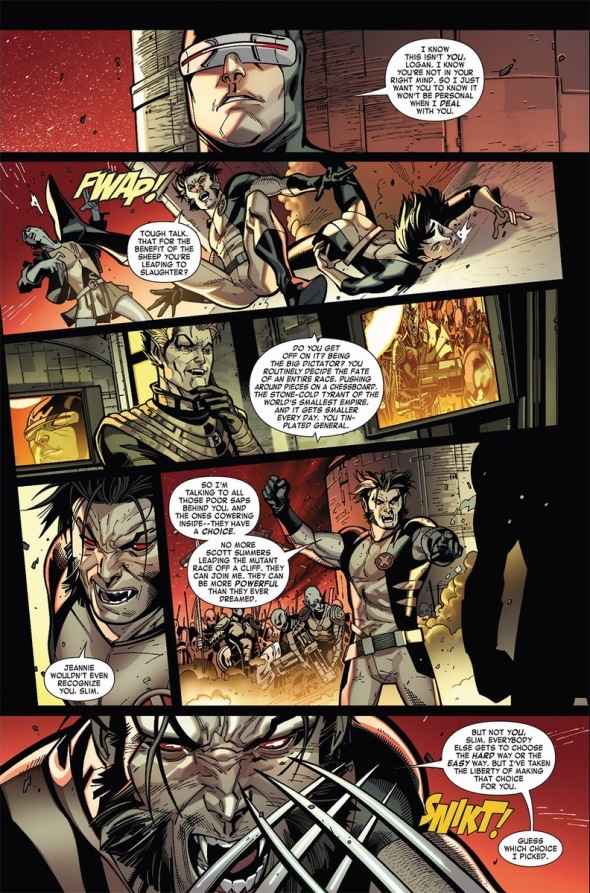 Vampire Wolverine has the benefit of being unfiltered and evil as opposed to his normal unfiltered and curmudgeony.  Nowadays, the X-Men preside as the Batman of the Marvel universe, in that they have plans for every single possible scenario — poor planning prevents the extinction of the few hundred remaining mutants against almost ten thousand bloodsucking monsters and Vampire Wolverine. Anyway, they win.  Go buy the book for all that.  Most important to today’s topic: 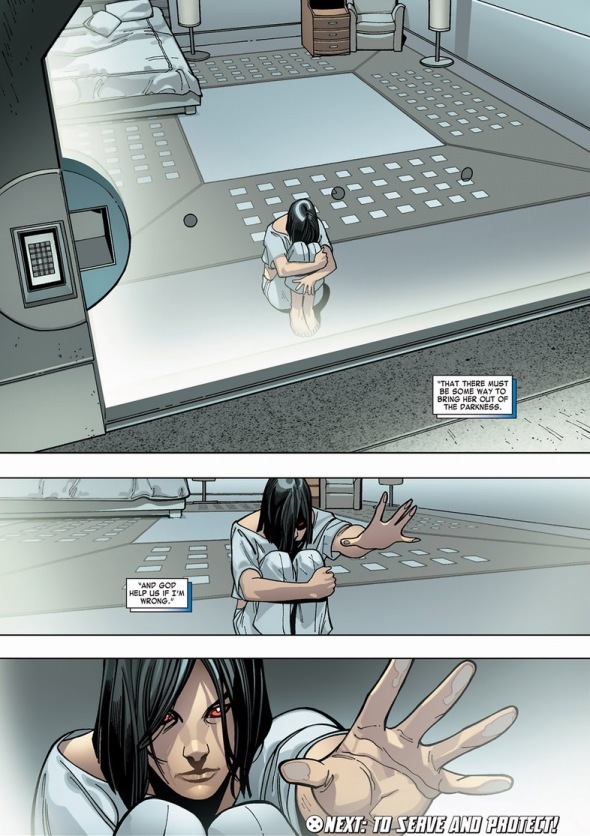 Yes, now instead of a being a powerless nobody, Jubilee now gets to walk the streets as a hungry, bloodthirsty night demon.  It might have been better for her emotional health if she stayed useless. Unfortunately, like I mentioned earlier, there’s no going back — vampirism doesn’t cure if someone doesn’t possess a healing factor or the writer no longer wants her to be a vampire.

We jump five issues to a simpler time, where Professor X still had that shred of kindness and teacher-ness deep inside him before all that uncovered psychic manipulation tainted his reputation.  We start with an angry Jubilee, as most people who are turned into vampires against their will tend to be:

In this issue, he tells a long story from his pre-Magneto past where he tracks hunters in Africa.  The story itself doesn’t become relevant until the final scenes, when he meets a special man.  Or used to be man.

You can probably guess his secret.  Hint: it starts with a “v” and ends in “–ampire.”  Like all mythical monsters, you get the good and the bad populating a universe with billions of other fictional people. Take DC’s sword-wielding Frankenstein.  DC’s ghost Deadman.  Half of Blade.  So when Professor X assures Jubilee that her actions from this point have no influence from the vampire baddies of the past, he has proof.  That and the only vampire to ever wear a tank top. 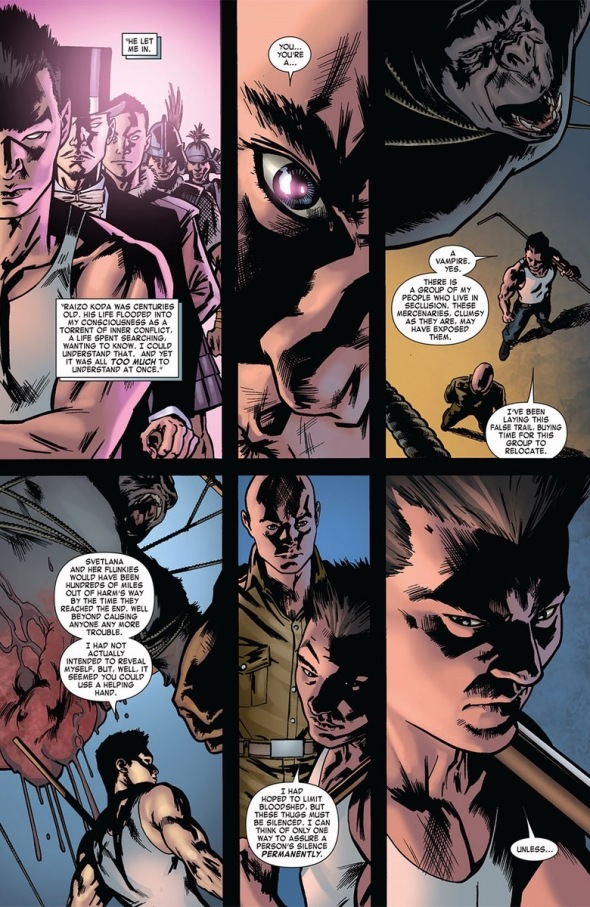 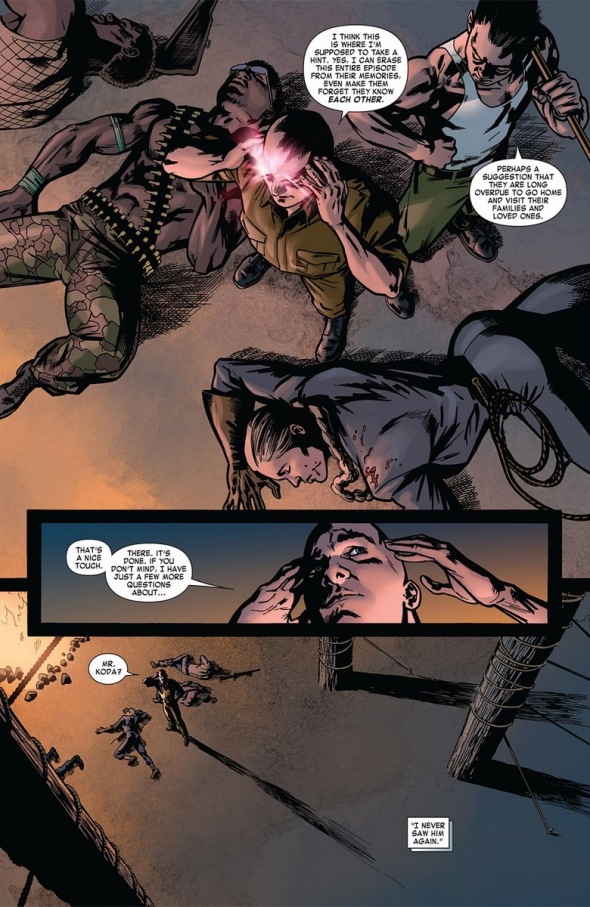 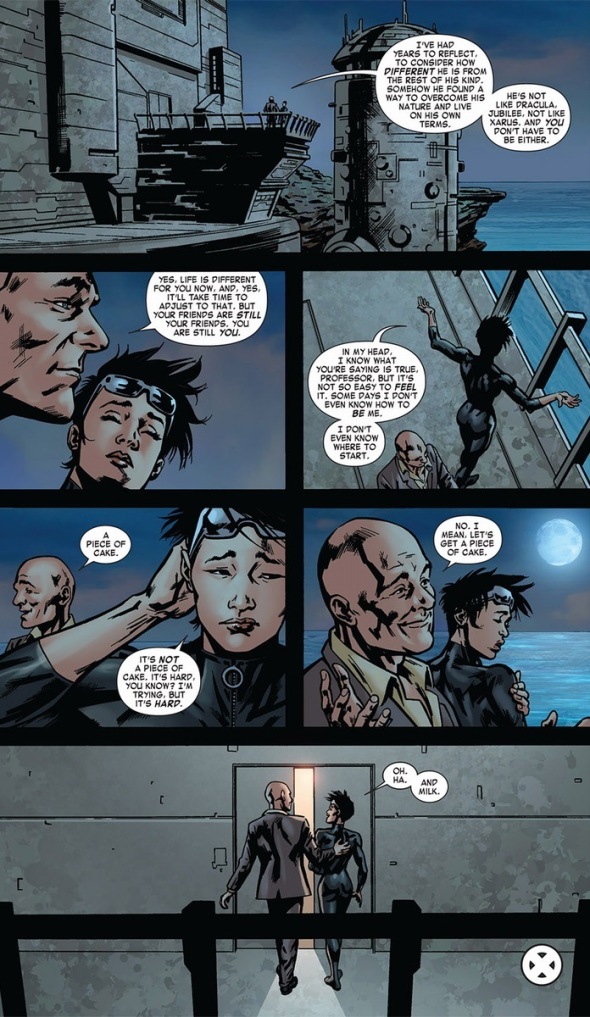 On Wednesday, we’ll read more Vampire Jubilee stuff, because I’m never afraid to beat a dead horse well beyond the point of embarrassment.

One Comment on “Jubilee turns into a vampire, Pt. 2”