← The benefits of Alfred Pennyworth
A brief moment with Black Widow →

A few years ago, the old Hobgoblin was killed.  Well, his brother anyway who sometimes wore the costume in place of the original Hobgoblin.  It’s complicated.  But in Amazing Spider-Man #650, written by Dan Slott and drawn by Humberto Ramos, the new supervillain became Kingpin’s number one assassin.

Unfortunately for New York’s local heroes, Hobgoblin spends most of his time trying to kill anyone who gave a dirty look to the world’s deadliest crime boss.  He’s like Electra except far more annoying and showing far less skin.  Today, we’re going to see our baddie battle some of New York’s finest.  First up, Spider-Girl #6, written by Paul Tobin and drawn by Clayton Henry. 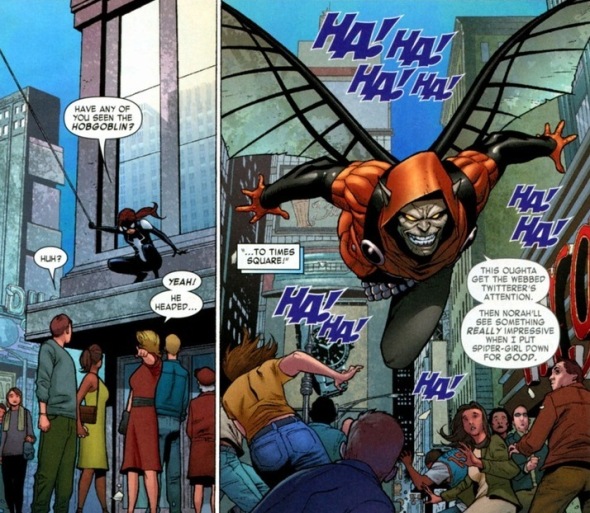 I’ve covered Spider-Girl before in a previous article.  Imagine a normal, athletic 16 year-old girl.  There, that’s Spider-Girl.  While Hobgoblin isn’t exactly Hulk-level in terms of superpowers, he does have a bunch of cool gadgets and surprises. 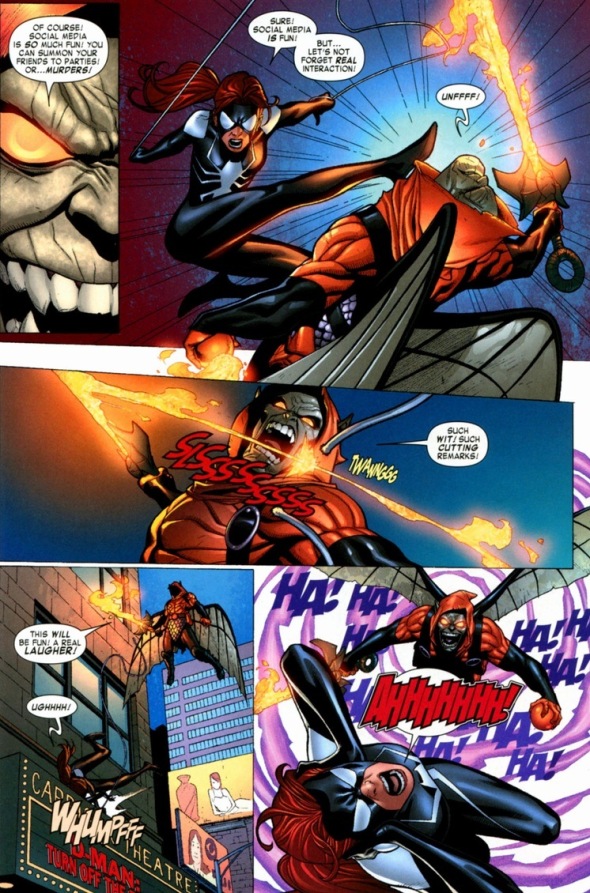 Why’s this Hobgoblin so much deadlier than his predecessors?  Turns out Phil Urich (his real name) ingested some Green Goblin juice back in the day, giving him the ability to paralyze his opponents by laughing.  Spider-Man beat this by inventing a special suit that reflects sound waves or something.  I don’t really do a large amount of science-related research.  Poor Spider-Girl has to use less impressive methods. 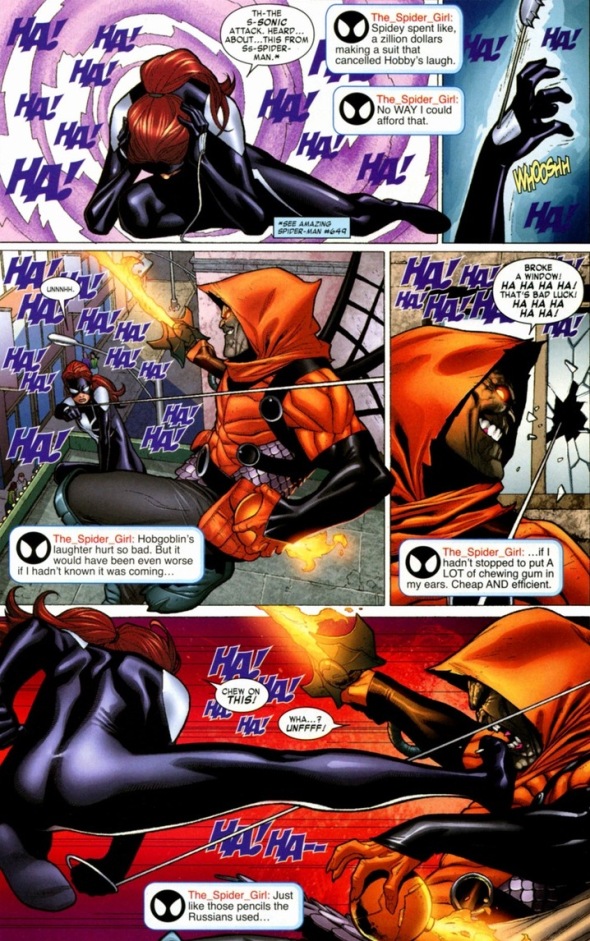 Not exactly a master strategist, Hobgoblin finally decides to do something useful, like fly in the air. Most sixteen year-old girls can’t fly.

See that satchel our hero stole?  Hobgoblin has to keep his gadgets somewhere.  Supervillains don’t have the luxury of fanny packs.  God only knows where he stores his flaming sword when not in use.

Remember what I said last article about non-powered superheroes?  Without brute strength or crazy powers to rely on, they have to use intelligence and planning.  Luckily, Spider-Girl’s gifted and talented.  The spider-powered man she’s named after though?  At least he means well. 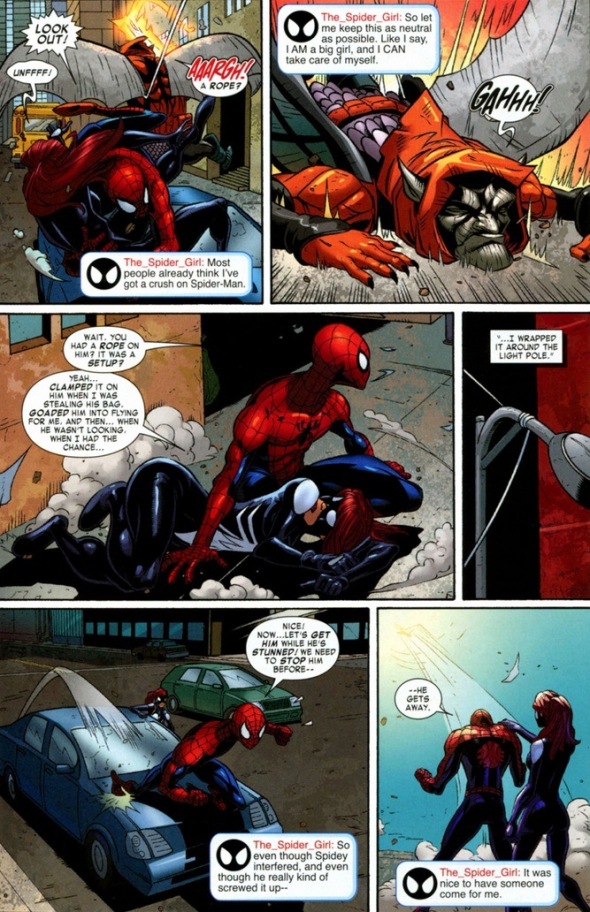 Look, Urich can’t be arrested and sent to jail.  The kid’s way too mouthy and good-looking.  Also, certainly a pervert.  Strangely, the Kingpin doesn’t have much patience for defeat seeing as how the fat guy’s beaten up and humiliated once a year or so.  And that’s just by Daredevil.

To redeem himself to his boss, Hobgoblin’s sent after a young woman next in Herc #2, written by Greg Pak & Fred Van Lente and drawn by Neil Edwards & Scott Hanna.  Unfortunately, this isn’t the promiscuous, all-powerful Hercules you know and love.  I mean, he’s still promiscuous, but he sacrificed his godlike powers to save the universe a while back.  The guy’s just a normal man who fights crime in a loincloth.

I love Hercules.  Greg Pak has done such amazing characterization on this legendary figure in the past few years that I would place him in my top five or six favorite superheroes.  Maybe seventh.  Most importantly, how can you dislike anyone who just Hawkeye’d a major supervillain? 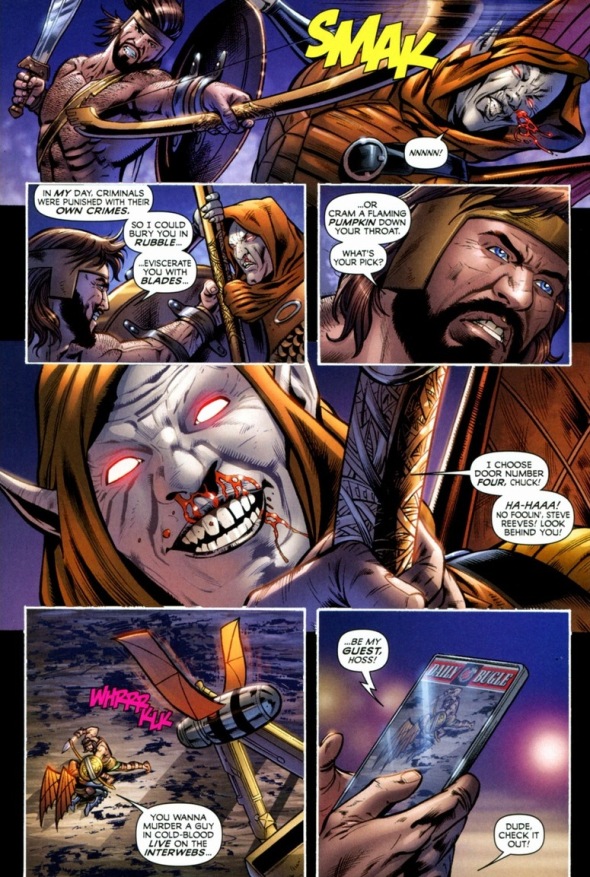 Recorded superhero fights should be happening more often than they do.  In the digital age, how can a single punch thrown by anyone in spandex not be on YouTube?  Now, Hercules has no problem chopping up supervillains, unfortunately his current opponent remains slippery — physically and personality-wise.

That’s the second time Hobgoblin’s bag of tech backfired on him.  The guy should really find a better way to store his bombs and goo.

I think I just found your new computer wallpaper: 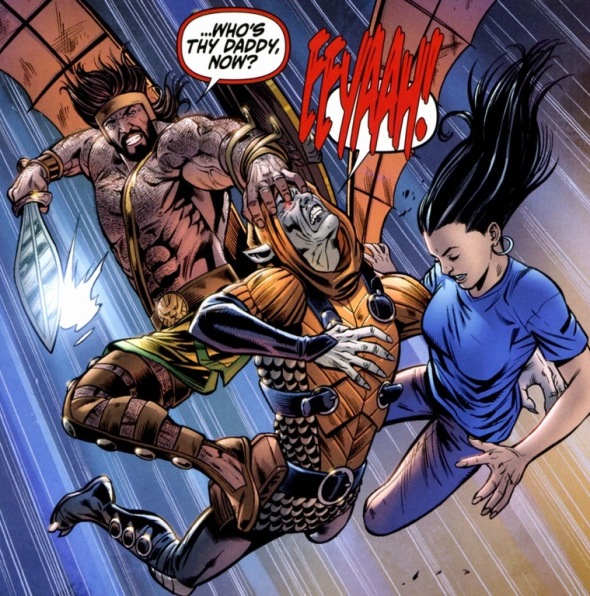 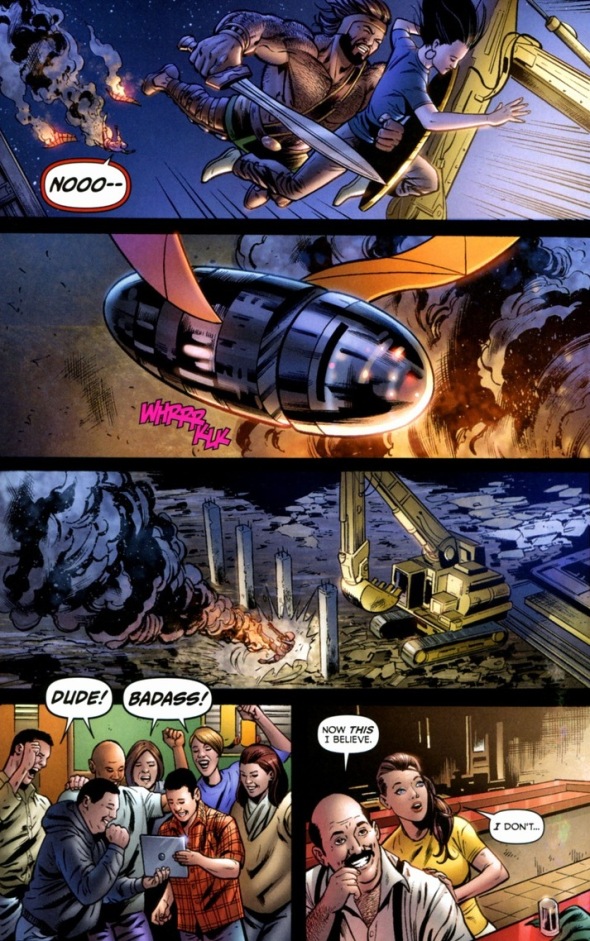 Two happy endings in one post.  No better way to end the week.